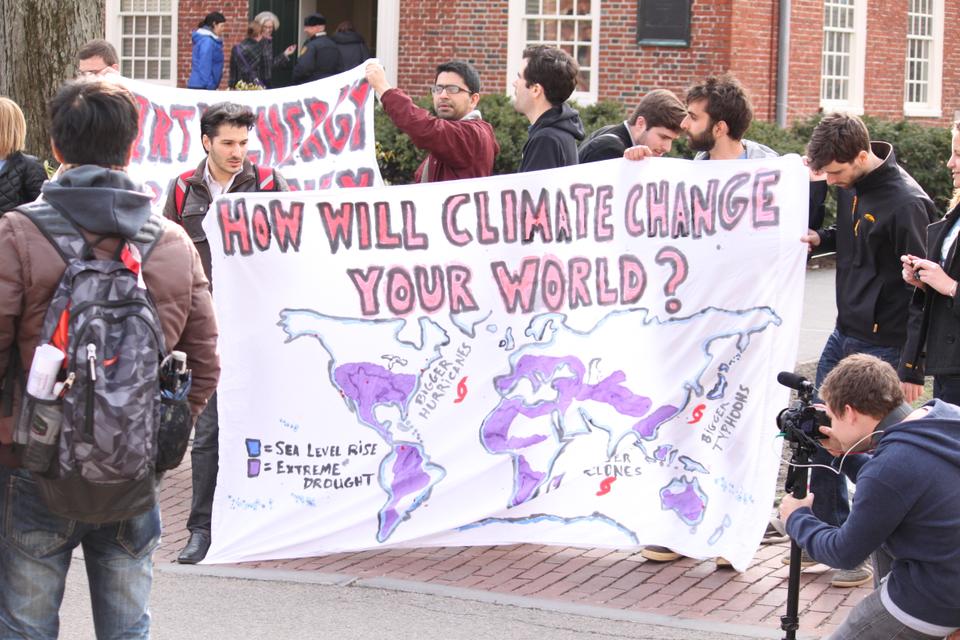 Students assemble outside Massachusetts Hall during the Harvard Divest Rally to call for divestment of endowment funds from fossil fuels on April 11, 2013.
By Meg P. Bernhard and Theodore R. Delwiche, Crimson Staff Writers

A group of seven Harvard student activists filed a lawsuit on Wednesday alleging that the University is violating its original charter through continued investment in fossil fuels and asked a court to force Harvard to “immediately withdraw” its holdings in the industry.

The 11-page complaint claims that investment in fossil fuel companies is “a breach of [the University’s] fiduciary and charitable duties as a public charity and nonprofit corporation.” The group of students, who call themselves the Harvard Climate Justice Coalition, alleges that Harvard is mismanaging its funds by investing in the fossil fuel industry and “abnormally dangerous activities.”

All the plaintiffs are members of climate change activist group Divest Harvard, according to the campaign’s co-director, Canyon S. Woodward ’15, who is not affiliated with the case. Divest Harvard has continually battled with University officials on the issue of divestment from fossil fuel companies since its founding in 2012. Some faculty members have also called for divestment, most notably through an open letter to administrators on the subject this past spring.

Students assemble outside Massachusetts Hall during the Harvard Divest Rally to call for divestment of endowment funds from fossil fuels on April 11, 2013. By Christopher J Magnani

The suit, which the complainants filed in the Suffolk County Superior Court, names the Harvard Corporation, the Harvard Management Company, and Massachusetts Attorney General Martha M. Coakley as defendants in the case. HMC oversees Harvard’s more than $36 billion endowment.

The complainants will not be represented by a lawyer, according to their website. The New York Times first reported the pending lawsuit Wednesday.

Plaintiff Kelsey C. Skaggs, a student at the Law School, said in an interview Wednesday evening that the group first considered suing the University to divest in January and anticipates that, if heard, the suit could last for months. She said the coalition began to research and ultimately filed the complaint “because the University has failed to respond to students’ request to speak about divestment publicly.”

University President Drew G. Faust has repeatedly rejected activists’ calls for divestment. In an open letter on the subject, she wrote that divestment is not “warranted or wise.” In an Oct. 2013 letter, Faust critiqued the use of a university endowment as “a lever to exert economic pressure for social purposes” as a risk to “academic enterprise.”

“We should, moreover, be very wary of steps intended to instrumentalize our endowment in ways that would appear to position the University as a political actor rather than an academic institution,” she wrote. “The endowment is a resource, not an instrument to impel social or political change.”

On Wednesday, the University did not specify how it plans to respond to the lawsuit. In a statement, University spokesperson Jeff Neal wrote that officials agree that the “threat” of climate change “must be confronted, but sometimes differ on the means.”

The Harvard Climate Justice Coalition's lawsuit is hardly the first public call for divestment from Harvard affiliates. Last spring, members of Divest Harvard blockaded Massachusetts Hall, which prompted the arrest of one protester, Brett A. Roche ’15.

Skaggs, for her part, said Wednesday that the group sees the lawsuit as another means to put pressure on Harvard to divest from fossil fuels.

“I think the bottom line is when you're fighting for the future of a livable planet, you have to use all the tools available,” Skaggs said. “We have an obligation to do everything that we can.”

According to The Times, the group's legal arguments are "unusual," with some lacking apparent precedent.