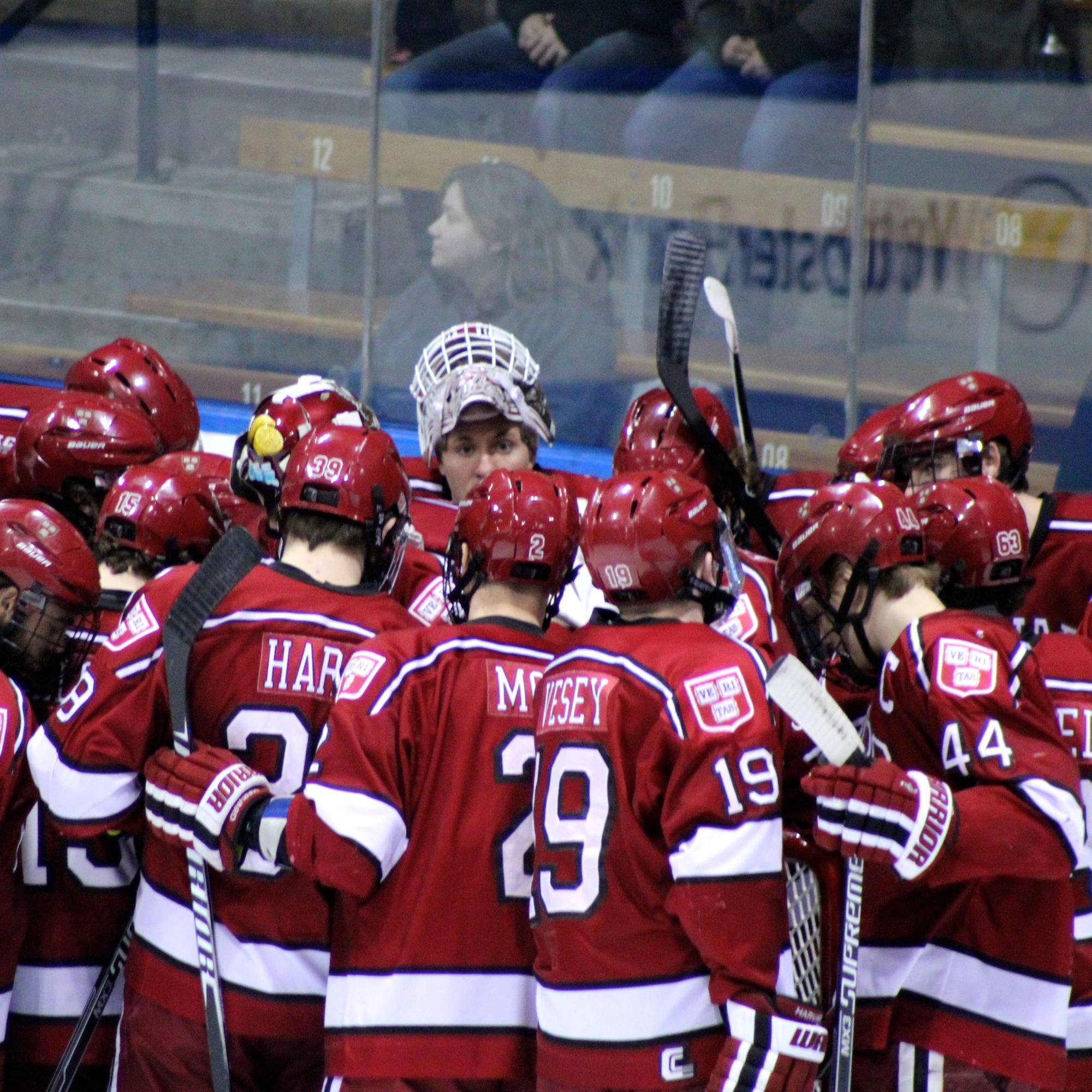 NEW HAVEN, Conn.—Prior to Friday, the last time the Harvard men’s ice hockey team left the Whale with a victory, junior forward Jimmy Vesey was 11 years old. After picking up a 5-3 road win over Yale in 2005, the Crimson had traveled to Ingalls Rink 12 times since, only to come up short on each trip.

Vesey had been on the ice for five of those 12 losses—part of his 0-9-1 career record against the Bulldogs. But with one swing of his stick on Friday night, both losing streaks came to an end.

With the score even at two in the waning moments of Game 1 of the ECAC quarterfinals, Harvard found the answer it had been seeking for over a decade with 2:26 remaining. After picking the pocket of Yale junior defenseman Rob O’Gara, sophomore forward Alex Kerfoot fed Vesey on a two-on-one, and the Nashville Predators prospect delivered what he later called “the favorite goal of [his] college career” to lift the No. 18/- Crimson (18-11-3, 11-8-3 ECAC) to a 3-2 win.

“Kerfoot made a great pass,” Harvard coach Ted Donato ’91 said. “And there aren’t a lot of guys I’d rather have than Vesey alone in the slot.”

Less than a week after Vesey became the first member of the Crimson to reach 50 points in a single season in 12 years, the junior reached the 50-goal plateau for his career with the game-winner. He is tied for first in the country with 26 goals on the year.

Following the goal, the Harvard defense, sparked by the return of fourth-year defenseman Patrick McNally to the lineup, held the No. 12/12 Bulldogs (17-8-5, 12-6-4) off the board to secure the victory. After missing the last 14 games with a leg injury, McNally reclaimed his spot on the top pairing with junior Desmond Bergin Friday, sealing the game with one final clear in the closing seconds.

“[McNally] still kind of looks like his old self out there carrying the puck and making great decisions...and jumping into the rush,” Vesey said. “He’s another guy we’re happy to have back.”

Kerfoot, who went down with an injury in Game 1 of the Crimson’s opening round series with Brown, also made a difference in his return, scoring Harvard’s second goal of the night in addition to his assist on Vesey’s winner.

“[Kerfoot] gutted it out tonight and obviously made some big plays for us,” Donato said. “It’s been a long time since we’ve had this many guys in the lineup, so I do think it should help us to be able to keep a little bit more energy from period to period and hopefully from night to night.”

After jumping out to a 2-0 lead behind second-period goals from sophomore forwards Sean Malone and Kerfoot, the Crimson eventually watched its lead slip away.

Despite holding Yale to just five shots in the second frame, Harvard saw the Bulldogs begin their rally with under a minute remaining in the period. With fourth-year goaltender Steve Michalek sprawled across the ice after making his fourth save of the stanza, the puck skipped out in front of the net to Yale junior forward Cody Learned, who lifted the puck over Michalek to cut Yale’s deficit in half prior to the intermission.

Learned’s goal boosted the Bulldogs, who needed less than two minutes out of the second break to erase the gap entirely. Winding up from the left circle on a power play, freshman forward Nate Repensky found the netting to even the score and ignite the Ingalls crowd.

But Yale would be unable to come up with another, as the Crimson first line took control in the game’s final minutes, putting a third goal past Bulldog sophomore netminder Alex Lyon for the first time in nine tries. Entering Friday, Lyon had allowed just two goals in three games against Harvard this season as part of his 7-0-1 career record against the Crimson.

“After the second period, our line talked, and we all agreed we could be a lot better,” Vesey said. “Luckily we got the goal in the third period.”

After a scoreless first in which Harvard failed to convert on a handful of scoring opportunities, Malone put Harvard on the board 1:12 into the second period. Coming away with a steal in the neutral zone and darting up the center of the ice, the sophomore lifted a shot over the shoulder of Lyon to give his side its first lead of the season over the Bulldogs.

The lead doubled two minutes later when the Crimson defense caught Yale in the middle of a line change. Vesey received a cross-ice pass at the attacking blue line, where he dropped off a pass to junior forward Kyle Criscuolo behind him. In turn, the co-captain delivered a pass through the crease to the remaining member of the Harvard first line, Kerfoot, who hammered the puck into the back of the net.

Having risen to 15th in the Pairwise rankings with the win, the Crimson will play the Bulldogs again on Saturday in Game 2 of the best-of-three series, which Harvard now leads, 1-0.

“[The win] feels pretty good, but obviously we know that it doesn’t mean much unless we can get a second win,” Donato said. “We’ll take a deep breath, see what we need to improve upon, and come back tomorrow night.”