'The Dream of My Return' a Nuanced Dream

“The Dream of My Return” by Horacio Castellanos Moya (New Directions) 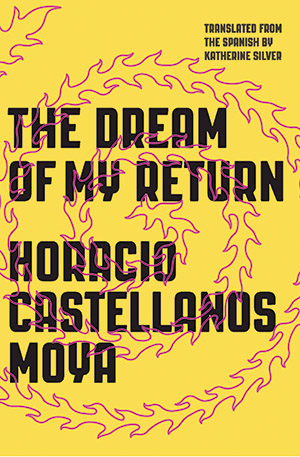 Erasmo Aragon is in limbo. His life is unraveling—he had quit his job and plans to leave his wife. He dreams of returning to El Salvador and making a new start in his former home but cannot yet realize that dream. His last paycheck hasn’t been delivered, his wife laments their young daughter’s future, and a persistent liver pain once thought to be cured has mysteriously returned to torment him. Hoping to alleviate the pain, he seeks the advice of Don Chente, a retired doctor. Yet before he completes his prescribed course of hypnosis, Chente himself disappears to El Salvador, leaving Aragon to ruminate on the memories dredged up by the treatment. This is Horacio Castellanos Moya's “The Dream of My Return.” In telling Aragon’s story, Castellanos Moya demonstrates his facility with the stream of consciousness narrative, masterfully depicting the psyche of an exiled journalist trapped in a Kafkaesque nightmare of anxiety and paranoia.

By Courtesy of New Directions

Castellanos Moya's writing captures the inner workings of thought in slow motion. Aragon recollects an argument with his wife, Eva: “I asked her what was going on, assuring her that she could trust me and tell me what was tormenting her, though at no time had she mentioned that she was being tormented, nor had I witnessed any such torment; she sat up in bed, arranged the pillows behind her, and started by asking me to forgive her, without saying what I should forgive her for.” The sentence progresses as a drifting down through the many layers of Aragon’s increasing awareness of the moment until he realizes she has been cheating on him. Here, as throughout the novel, Aragon’s convoluted narration provides a framing that is somehow simultaneously nebulous and precise, evocative of a journey through one’s own remembrances.

The novel thrives on nuance, and the understated beauty of the language perfectly describes the internal musings of a journalist, a worker with words. For everyone except the narrator, Castellanos Moya eschews a complicated backstory, instead developing characters through their ways of being—speech patterns, attitudes, and so on. They float like vignettes on the canvas of the narrator's consciousness. Aragon's friend “Mr. Rabbit,” for instance, receives a cursory introduction as an ex-guerrilla; this role is solidified by later observations of his reticence in public and moments of extraordinary composure. “It’s no problem for me to do something like that, I learned how to a long time ago, out of necessity,” Mr. Rabbit reassures Aragon, who is overcome with guilt when the two begin to enact a revenge-murder plot.

Aragon's story unfolds as a string of memories, centered around his visits to Don Chente. Each week he approaches his appointment, cataloging the activities of the past week that he deems it best not to confide to his doctor, then leaves, contemplating the distant memories that the doctor asks him to recall. His life story becomes increasingly amorphous, an amalgamation of dream and reflection, suggesting that perhaps the whole tale is more fever dream than reality. While this technique may make the novel’s earliest pages to feel muddled, it quickly creates a rich, unpredictable, and captivating narrative landscape.

In this ever-shifting space, Castellanos Moya illuminates the extraordinary violence that characterized the narrator's Salvadoran childhood. Aragon’s first memory is of the bomb that destroyed the front of his grandparents home. In a matter-of-fact tone he recalls his second one: To punish a preschool classmate for stealing his blocks, Aragon took one of the remaining blocks and repeatedly smashed it into the head of the offender until the child began to scream in pain. The novel also incisively depicts the obsessiveness of the narrator's desire to start a new life, the heady, intoxicating quality of his plan to return to El Salvador; the most ambitious moments of dreaming coincide with his compulsive consumption of vodka tonics, while doubts regarding the trip arise only in the depths of a hangover.

The writing is possessed by a dark sense of humor, exemplified by the irony of the conclusions Aragon draws from his memories. After contemplating the block incident, he is pleased by the strength of his childhood self, determining that “It was obvious that from a tender age I had been able to react decisively to injustice.” Given his obvious unreliability as a narrator and unwillingness to straightforwardly approach his past, it is startling when additional forays into memory lead him to the smirk-inducing revelation, “It also became clear that memory is unreliable and can put one in rather a tight spot.”

So much has animated the book’s preceding pages—dreamy recollections of childhood, irrepressible hopes for transformation, tormented confrontations with anxieties past and present—that it is a shame for it all to fade into a scene of the narrator simply ogling a woman at the airport. As the multi-page ogle drags on, it is fortunately interrupted by a brief, illusory glimpse of Don Chente, perhaps returning from his own trio to El Salvador. Yet this satisfyingly disconcerting moment—like so many others in Castellanos Moya’s work—could shine on its own without needing to feel like an afterthought to the banality of the previous scene.

Though one would still hope for the last moments to deliver some sort of meaning or intensification of previous themes, “The Dream of My Return” is not the sort of story that demands a tidying of loose ends. It may end with a whimper, unfortunately, but this is an otherwise brilliant novel.