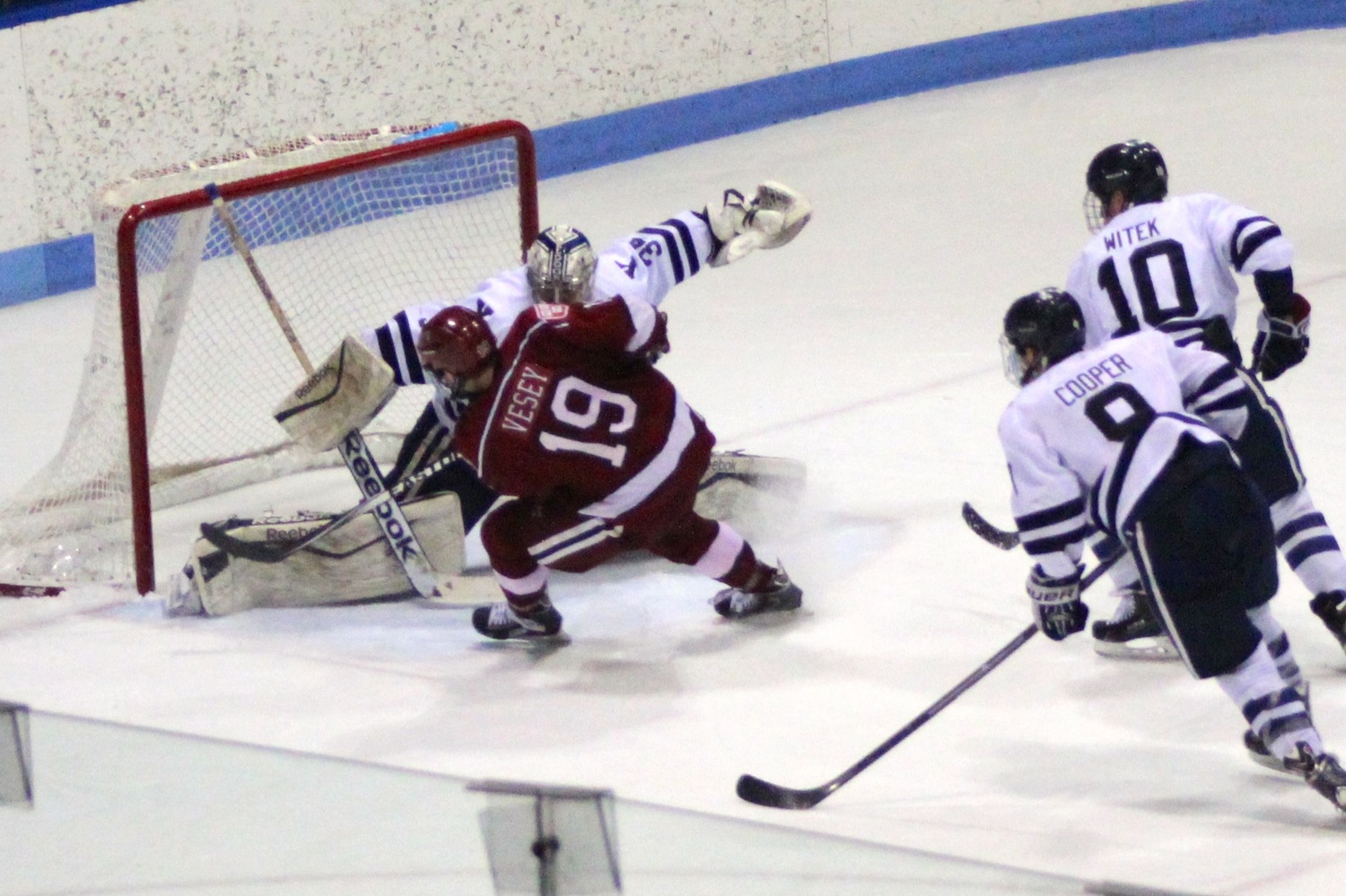 NEW HAVEN, Conn.—Jimmy Vesey has a flair for the dramatic. Sunday at Ingalls Rink, the junior scoring specialist’s eyes “lit up” when he saw his chance to end the longest game in Harvard history. 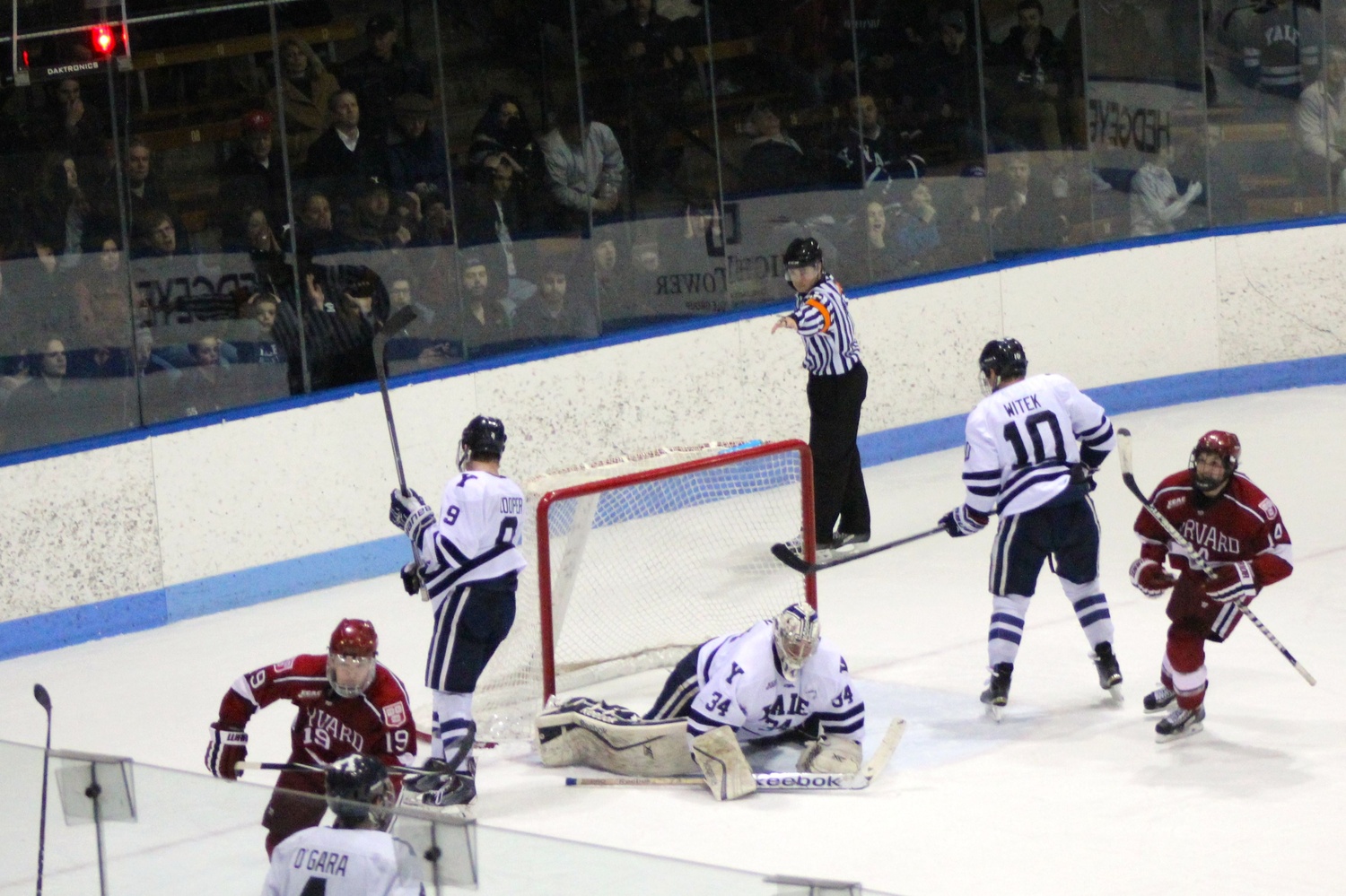 Vesey's overtime goal was his second game-winner of the series. By Michael D. Ledecky

“Luckily I beat my man off the wall, and my eyes lit up when I saw [the puck],” Vesey said.

With just over three minutes remaining in the second overtime period, the junior forward picked up a rebound from fourth-year defenseman Patrick McNally off the right pad of Bulldog sophomore goaltender Alex Lyon and lifted it blocker-side.

“It truly was a series that nobody deserved to lose,” Harvard coach Ted Donato ’91 said. “This was...an epic struggle for both teams.”

Sixth-seeded Harvard will play top-seeded Quinnipiac in the semifinal round at Herb Brooks Arena in Lake Placid, N.Y., on Friday with a chance to advance to the conference final on Saturday.

The Bulldogs (18-9-5, 12-6-4), meanwhile, finish their tournament having beaten Harvard four times this year, but two losses on home ice this weekend leave coach Keith Allain’s team 18th in the PairWise Rankings, outside of an unlikely at-large NCAA berth. The Crimson had entered the weekend without a win at Yale since 2005.

“It was a big mental hurdle, I think, to win the series,” Donato said.

Harvard cleared its biggest hurdle late in the third period.

Trailing, 2-1, late in regulation, the Crimson had struggled to pressure a smothering Yale defense that held the visitors to two shots on goal in the first 12 minutes of the frame. The Bulldogs entered the night undefeated (17-0-1) this season when leading after two periods, while Harvard (0-9-1) had yet to win a game while trailing after two periods. 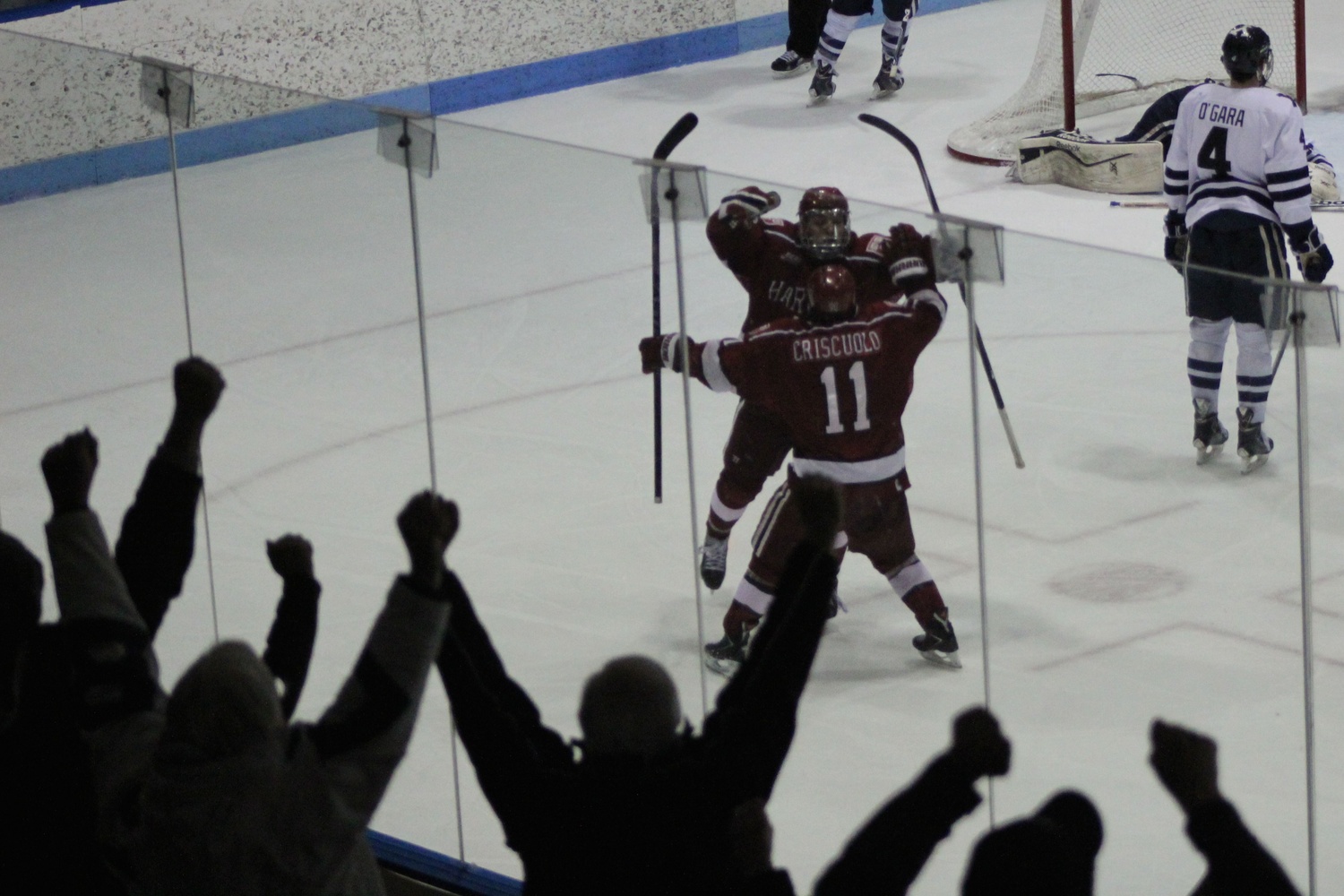 Vesey celebrates with junior co-captain Kyle Criscuolo. Harvard will play in the ECAC tournament's final weekend for the first time since 2012. By Michael D. Ledecky

But with under four minutes to play, Harvard received a spark from a combination that would have seemed unlikely as early as three weeks ago.

Fourth-year forward Colin Blackwell, skating on the second line after returning from a long-term injury in the final weekend of the regular season, cut into the Yale zone and created space at the left point for McNally, who ripped a wrist shot through the legs of Lyon.

It was the first goal for McNally since Nov. 21. The top-pair defenseman had returned to the lineup this weekend after sustaining a serious leg injury at Cornell in late January.

“I really just never gave up hope and just took it one day at a time,” McNally said of his rehabilitation. “I focused on that, just getting better little bit by little bit.”

In overtime the Crimson would play without Blackwell, who was sidelined with cramps, but McNally continued to change the shape of the game. He skated away with a bloody forehead at 14:55 in the extra frame after a head-first hit into the Yale backboards by senior forward Matt Killian, who was assessed a five minute major and game disqualification for the play.

Harvard’s power play failed to convert on the major penalty, yet Donato remained positive heading into the fourth intermission.

“I went [into the locker room] and kind of joked and said, ‘You know what guys, we don’t want any excuses when we get this done anyway, so let’s do it five-on-five,’” Donato said.

Harvard survived two minor penalties in the fifth frame before McNally followed up his goal with a helper on Vesey’s game-winner. With 3:21 on the clock, Crimson sophomore Alex Kerfoot won a faceoff in the Yale zone out to McNally, who sent in a long wrist shot that Kerfoot tipped left on its way to Vesey.

Vesey, who leads Division I in goals per game with 27 strikes in 34 contests, also had the deciding third-period goal in the series opener on Friday.

“I said Friday’s was [the biggest goal of my career], but I think this one tops it by a long shot,” Vesey said.

Harvard’s only lead in regulation lasted 21 seconds in the first period.

After sophomore forward Tyler Moy slipped a close-angle unassisted strike under Lyon’s pads low in the right faceoff circle, the Bulldogs marched back on their next offensive possession.

On a rush, junior forward Carson Cooper sent an outside shot on Harvard goaltender Steve Michalek, who could not locate the puck at his skates before junior Cody Learned poked it through the crease to draw even at 10:22 in the first period. 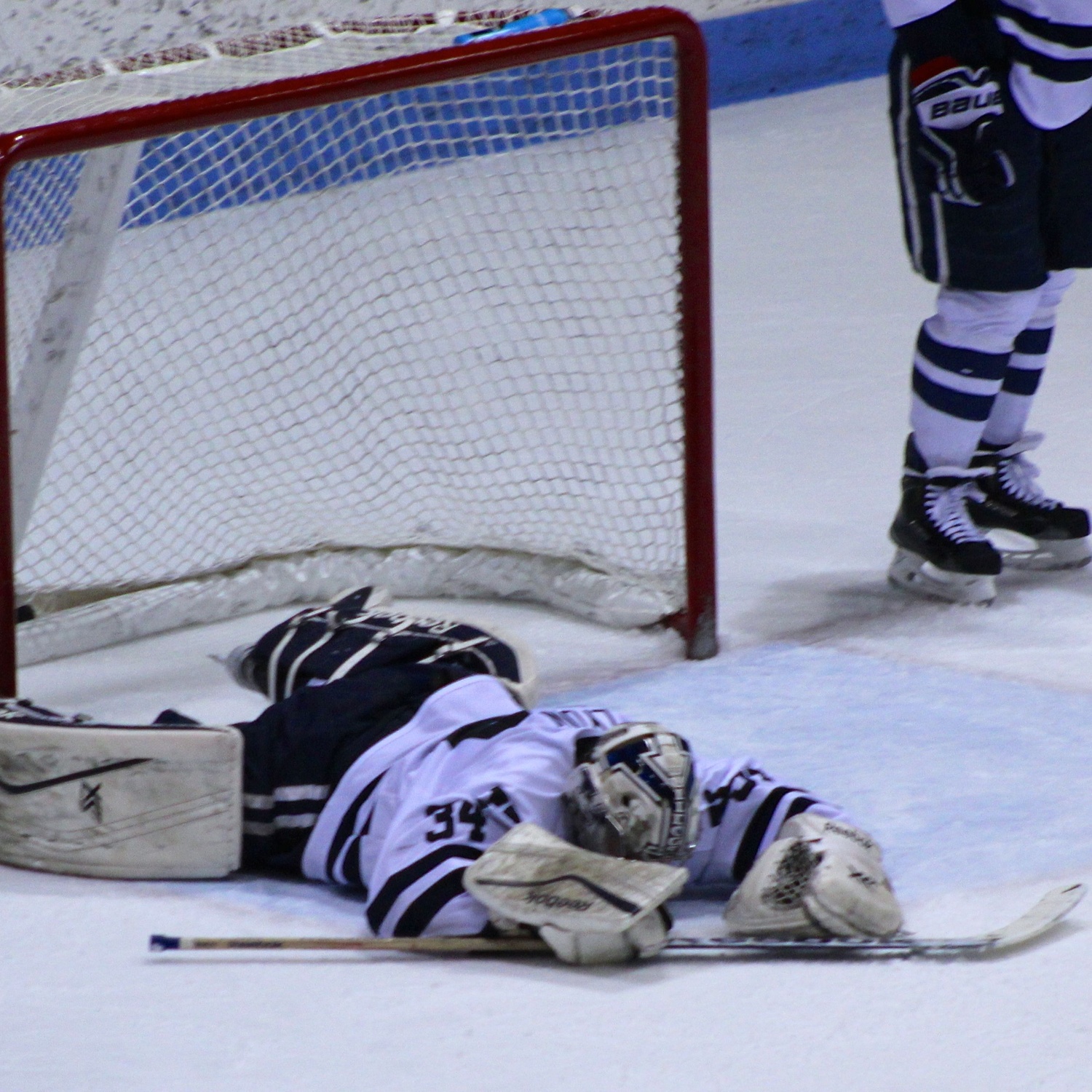 In the next frame, Yale took a 2-1 lead on the power play as Frank DiChiara struck on a one-timer from the top of the right faceoff circle at 11:58.

That score would stand for over a period, largely due to the work of the netminders. Both Lyon and fourth-year Harvard goaltender Steve Michalek made game-saving stops throughout regulation and overtime.

Michalek (40 saves) swatted away a point-blank opportunity from Trent Ruffalo in the middle of the second period and stopped Cody Learned on a close second-chance opportunity in the first overtime.

“With all the emotional ups and downs with the power plays and the penalty kills, Lyon probably made a dozen huge saves,” Donato said. “I told the guys after the game that I just feel humbled to be a part of it. I was just very, very proud of our effort and our perseverance.”

Harvard now sits 15th in the PairWise Rankings with a chance next weekend to earn its first conference championship and NCAA tournament berth since 2006.