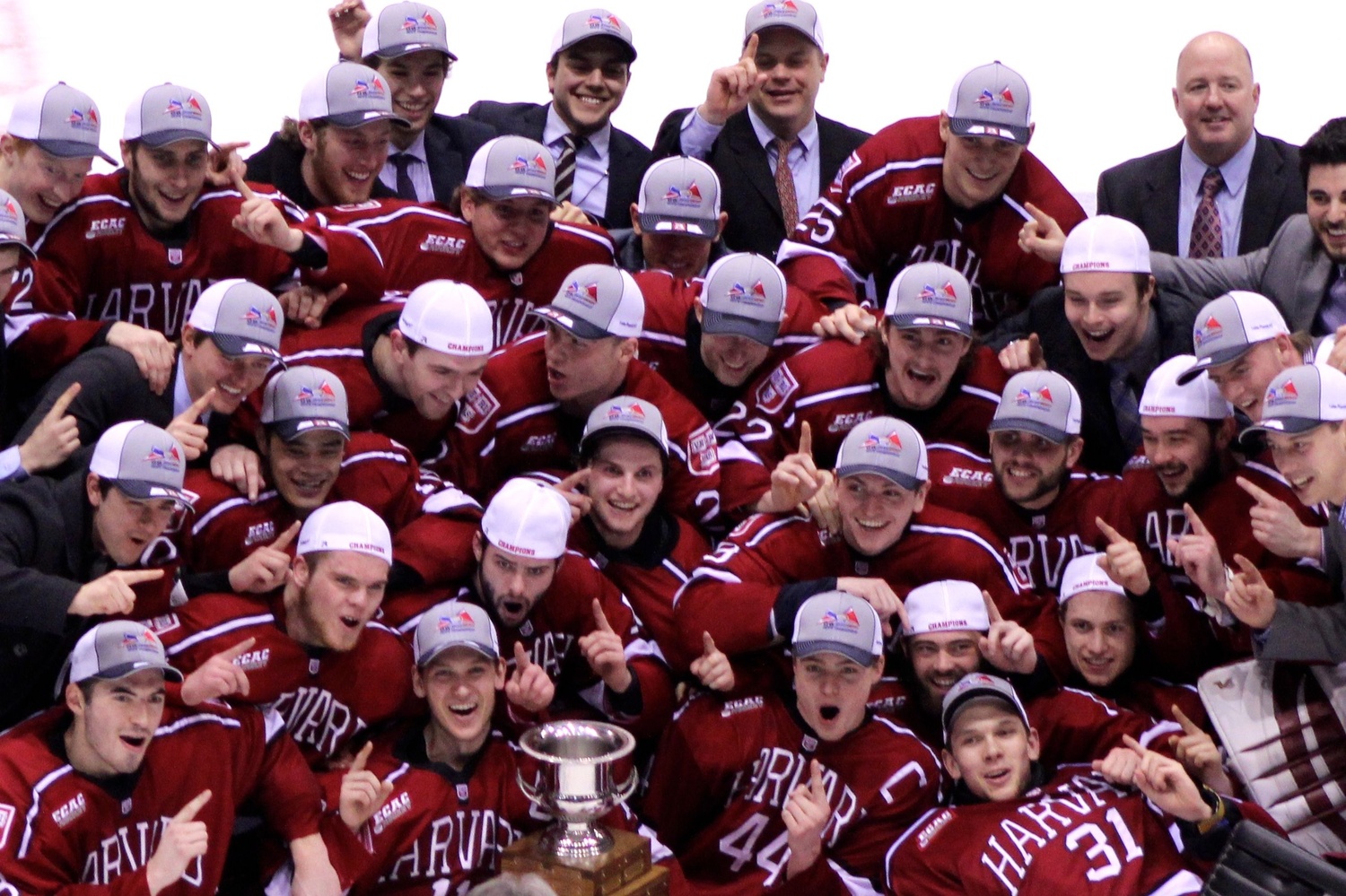 LAKE PLACID, N.Y.—Harvard’s Colin Blackwell scaled the boards, lifting his chin above the short glass of Herb Brooks Arena. The fourth-year forward’s head was finally in the right place.

For Harvard’s class of 2015, Friday’s win marked the realization of a dream years in the making. Injuries and eligibility issues kept much of the highly-touted class’s talent off the ice as the Crimson struggled through the 2012-2013 and 2013-2014 seasons. 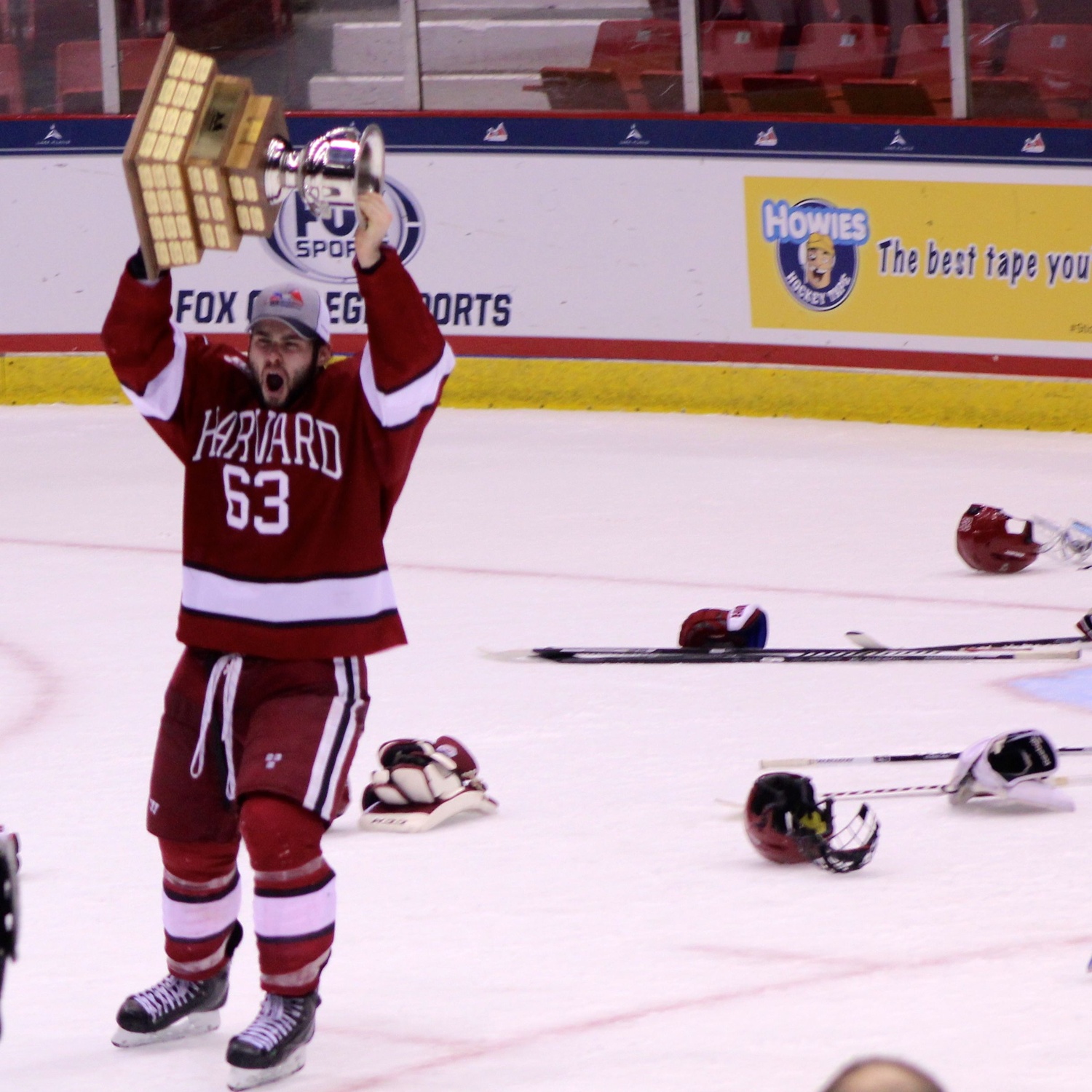 On Saturday, the fourth-years delivered. Goaltender Steve Michalek recorded a game-high 30 saves, and defenseman Patrick McNally scored the game-winning goal and added two assists. Blackwell topped things off with his empty-netter from the neutral zone.

“I’m particularly proud of the way they’ve handled themselves through a number of different circumstances, whatever came their way,” said Harvard coach Ted Donato '91, who captured his second conference title in 11 years behind the bench. “Just looking at the score sheet tonight gives me chills.”

Vesey, meanwhile, provided a dominant performance in the most important game of his college career. His second goal of the night and ninth of the postseason broke the ECAC all-time goal-scoring record for a single tournament, set by Cornell’s Doug Marrett in 1973. He also drew two key penalties, including a tripping minor with under five minutes to play.

Vesey scored the game’s first goal at 12:22 in the first period, punching in a rebound from junior co-captain Kyle Criscuolo at the right side of the crease, but Colgate junior forward Darcy Murphy evened the score less than three minutes later.

Seconds after officials reviewed and waved off an unsuccessful attempt by sophomore forward Derek Freeman, Murphy trapped a rebound off a faceoff win in the Harvard zone and batted the puck past Michalek.

Vesey’s record-setting goal put the Crimson back on top 1:29 into the second period. Working with the puck from the right side of the cage on a power play, the junior forward eluded a poke check by Colgate goaltender Charlie Finn before sliding one past his far pad.

“[Vesey] is one of the best players we’ve seen in our league in a long time,” Raider coach Don Vaughan said. “He has unbelievable control over his game. He seems effortless in his stride; I’ve never seen him break a sweat.” 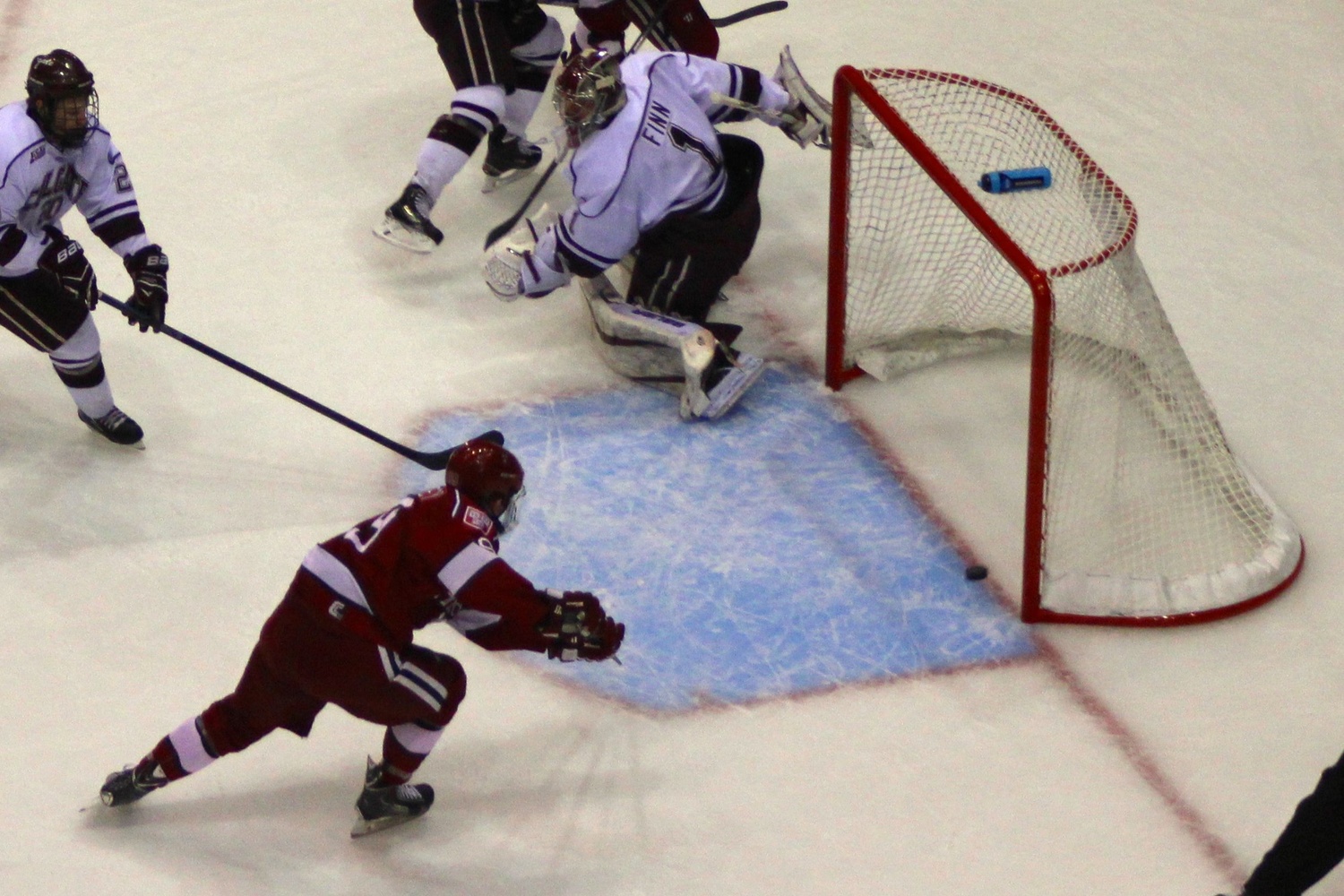 Junior forward Jimmy Vesey scores the first goal of the game in the first period, tying the ECAC tournament goal scoring record in the process. By Michael D. Ledecky

After Vesey drew a slashing penalty that prevented a potential breakaway for Colgate’s Daniel Gentzler, McNally extended the Crimson’s lead to 3-1, beating Finn five-hole with a wrister from the right faceoff circle at 8:16 in the second period. McNally, who returned to the lineup last weekend after undergoing rehab for a potentially season-ending knee injury, earned All-Tournament team honors alongside Vesey and Michalek.

“I think [a chance at an ECAC title] was one of the reasons why I decided to push myself and try to come back,” McNally said. “I knew that with the group of guys that we had, that we could make a run like this, and I just wanted to be a part of it and try to help out as much as I could.”

Its season on the line, Colgate nearly tied the game late. Senior forward John Lidgett received credit for the Raiders’ second goal after a crease-scrum in which Crimson junior defenseman Desmond Bergin inadvertently kicked the puck past Michalek. With just over a minute to go, Colgate captain defenseman Spiro Goulakos grazed a potentially game-tying shot off the right post. 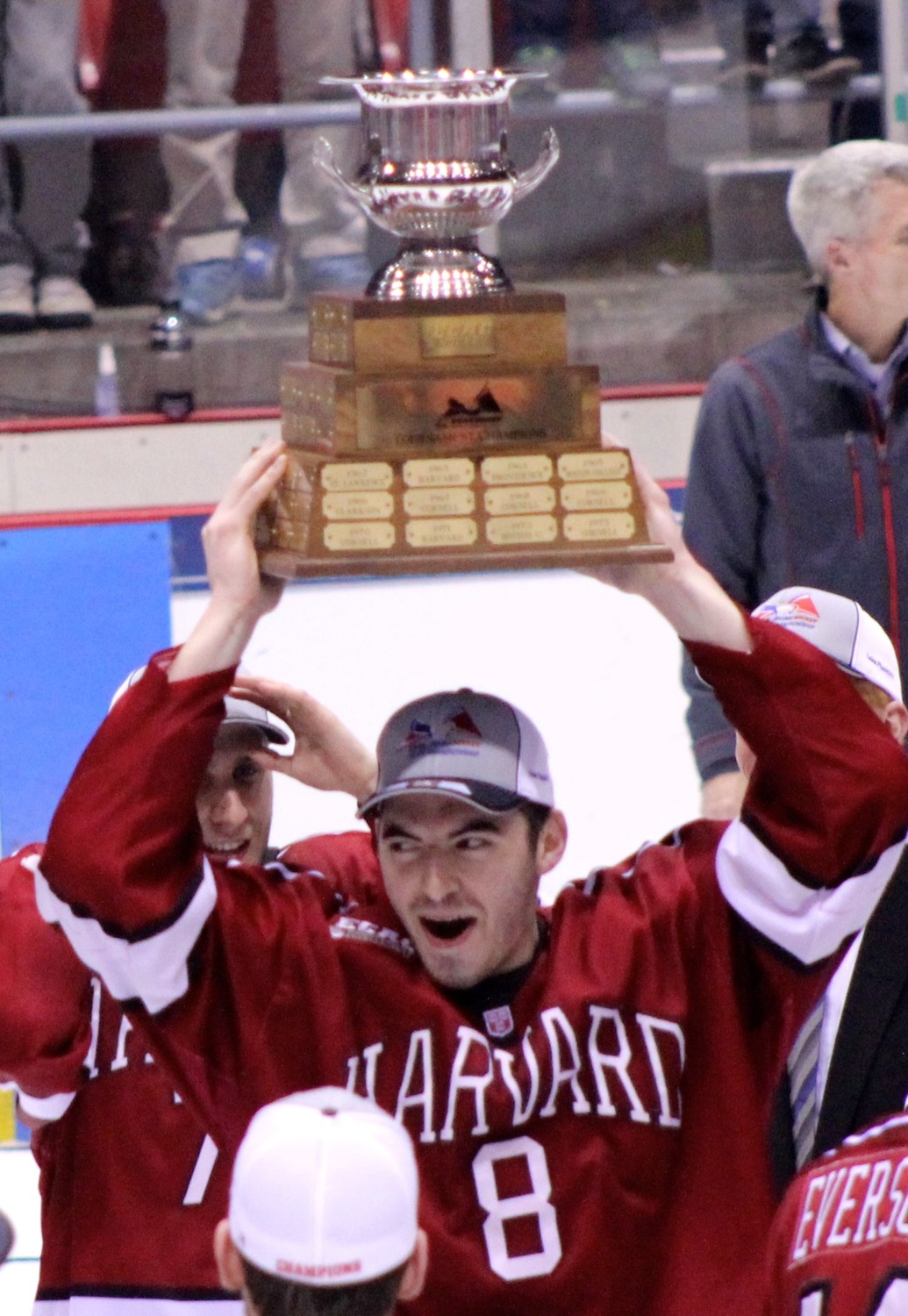 The miss marked a difficult end for the Raiders, who entered the year as the preseason conference favorites and were looking for their program's first ECAC crown since 1990. Colgate finishes its tournament just outside the top 16 teams of the PairWise rankings, a highly predictive measure of selection to the NCAA tournament.

Meanwhile, Harvard’s win will allow Yale to secure an at-large bid. The Crimson will learn the identity of its first round opponent on Sunday afternoon.

“It’ll be a fun one if we get those guys again at some point,” Criscuolo said of the Bulldogs.

Picked to finish in the bottom half of the ECAC in preseason polls, Harvard put up the best record in college hockey through December yet suffered key injuries and a second-half slide in the new year.

But with the late returns of McNally and Blackwell, the Crimson survived a late third period deficit in Game 3 of the ECAC quarterfinals at Yale before sweeping through its final two opponents in Lake Placid. Harvard is the lowest-seeded team to win the ECAC tournament title since another sixth-seeded Crimson team won in 2004.

“This is a talented group that believed in themselves,” Donato said. “They refused at every turn to listen to what some people on the outside thought.”