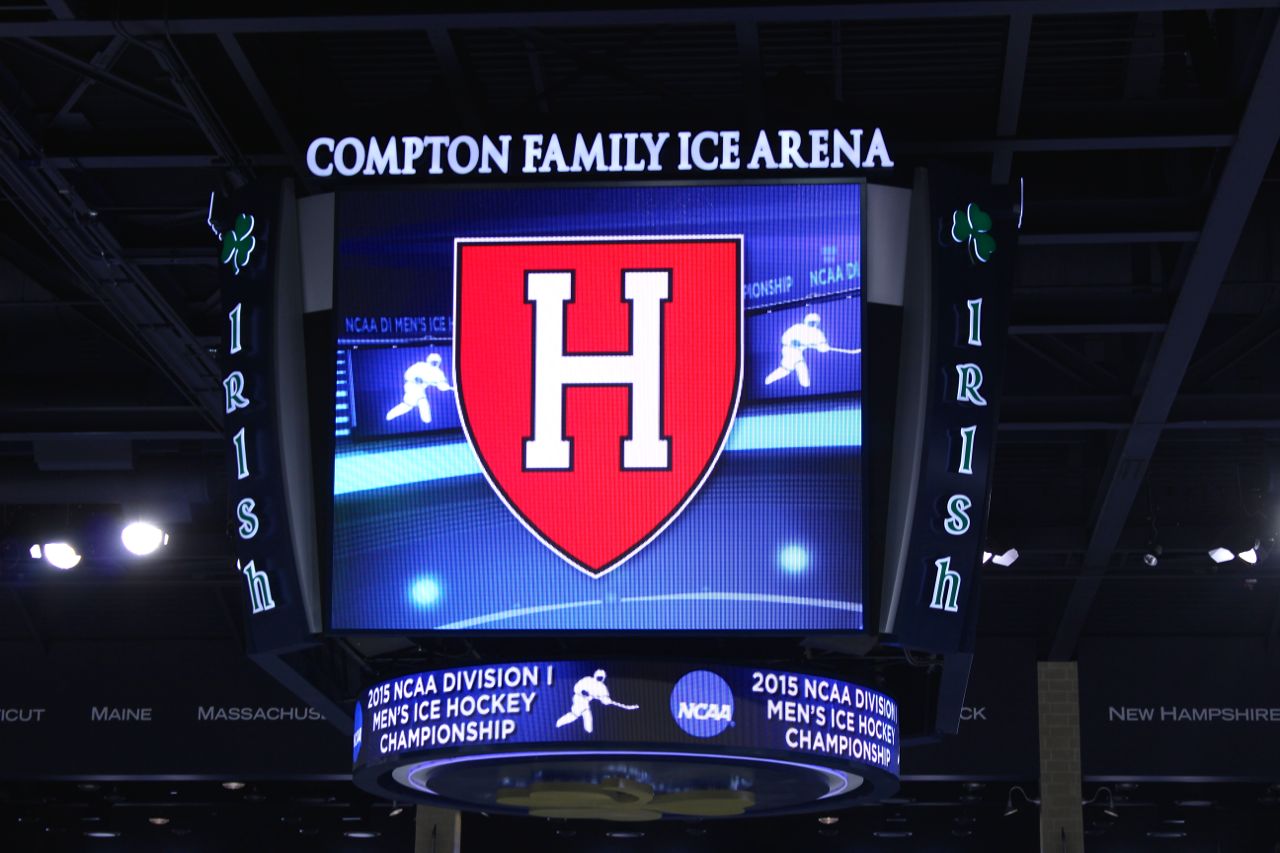 SOUTH BEND, Ind.—With wins over No. 11/11 Quinnipiac and No. 18/- Colgate in the final two rounds of the ECAC tournament last weekend, the No. 10/8 Harvard men’s ice hockey team (21-12-3, 11-8-3) clinched its first trip back to the NCAA tournament in nine years. Moving up to ninth in the PairWise rankings in the process, the Crimson earned the third seed in the Midwest region, setting up Harvard for a date with No. 9/9 Nebraska-Omaha Saturday night at the Compton Family Ice Arena.

THE ROAD TO SOUTH BEND

The Mavericks (18-12-6, 12-8-4-3 NCHC) finished third in the eight-team National Collegiate Hockey Conference this season before suffering an early exit in the conference tournament, where it dropped two straight home games to No. 13/13 St. Cloud State. But Omaha, who got out to a 16-7-3 start before slipping later on, received an at-large bid to the NCAA tournament, making the Mavericks the sixth team from their conference to receive an invite to this year’s Big Dance.

Omaha rattled off a number of big conference wins over the first half of the year, including a three-goal comeback against then-No. 10/10 Denver and road victories over then-No. 2 North Dakota (in a shootout) and No. 4/5 Miami. Then in January, the Mavericks earned their biggest win of the season, knocking off North Dakota, who had climbed to first in the country, in overtime by a score of 3-2. The win enabled Omaha to climb as high as fourth in the polls.

But the home stretch was not kind to the Mavericks. Following the win over North Dakota, Omaha closed out the regular season with just two regulation wins in its final nine games before dropping its two postseason contests to the Huskies. Nonetheless, because of their early exit, the Mavericks head into their matchup with Harvard with two weeks of rest under their belts.

“I don’t know if [the extra rest] will be an advantage—I just know at the time, that we needed the rest,” Omaha coach Dean Blais said at a press conference on Friday. “When we were down at the tournament and we watched the teams come in, there was a lot of exhaustion on their faces. It’s just that tough to travel and play and compete at the level that we did, especially for the last month.”

Composed of underclassmen, the Mavericks’ top line will have its hands full keeping up with the Crimson forward combination of Jimmy Vesey, Kyle Criscuolo, and Alex Kerfoot, which has combined for 134 points on the year.

Leading Omaha in points this season with 35 is sophomore center Jake Guentzel, while classmate forward Austin Ortega is right behind with 32. Ortega has recorded a team-high 19 goals on the year, 11 of which have been game-winners—an NCAA record—including the overtime dagger against top-ranked North Dakota on Jan. 30.

The Maverick’s top line could also get an added boost from co-captain forward Dominic Zombo, who skated with the team on Friday and is aiming to return from an undisclosed injury that has kept him sidelined for the last 10 games. The senior acknowledged earlier this year that the injury will require surgery at the end of the season.

“Zombo will probably play,” Blais revealed. “We’ll have to make that decision tomorrow. If there’s anything wrong with him, he won’t play.”

Another Omaha veteran looking to return to the ice on Saturday who could have the biggest impact of all is senior goaltender Ryan Massa. Massa ranks third in the country with a .934 save percentage, trailing only Alex Lyon and Kyle Hayton from Yale and St. Lawrence of the ECAC, respectively.

Despite hurting his left knee prior to the Mavericks’ final matchup of the regular season, Massa returned one week later for his team’s playoff opener against St. Cloud State. But the senior would make just seven saves in what proved to be a shortened return, as a collision in the crease led Massa to exit after less than 16 minutes of play. Nonetheless, Massa practiced with the team on Friday and is expected to man the crease on Saturday.

In the middle of his inaugural season with the Boston Bruins back in 1992, Harvard coach Ted Donato ’91 suited up for the United States men’s ice hockey team at the Winter Olympics in France. Serving as an assistant on the coaching staff that made the decision to select the former forward was Blais.

Since calling it quits on his playing career, which included four years at the University of Minnesota and a few more with the Chicago Blackhawks’ developmental team, Blais has spent nearly all of his time coaching. The skipper has coached at the high school, college, and international levels, highlighted by his experience with the U.S. Olympic team and two national championships as North Dakota’s head coach in 1997 and 2000.

Blais has coached Omaha since 2009, carrying the Mavericks to two NCAA tournament appearances over his tenure (2011, 2015). After his first trip to the Big Dance proved unsuccessful—a 3-2 loss to Michigan in St. Louis—Blais will look to secure his first tournament win with the Mavericks against an opponent he knows very well.

“[Donato] was a real tough competitor, and I think his teams are a reflection of his personality,” Blais said. “He was definitely one of the top players that I ever coached.”

Donato, meanwhile, will be searching for his first win in the national tournament in his 11 seasons coaching the Crimson. Donato-coached teams lost in the first rounds of the 2005 and 2006 tournaments.

“I have a tremendous amount of respect for [Blais]—first and foremost as a person; second, for his ability to coach and develop hockey players,” Donato said. “But [I] can’t say I’m rooting very hard for him tomorrow night.”