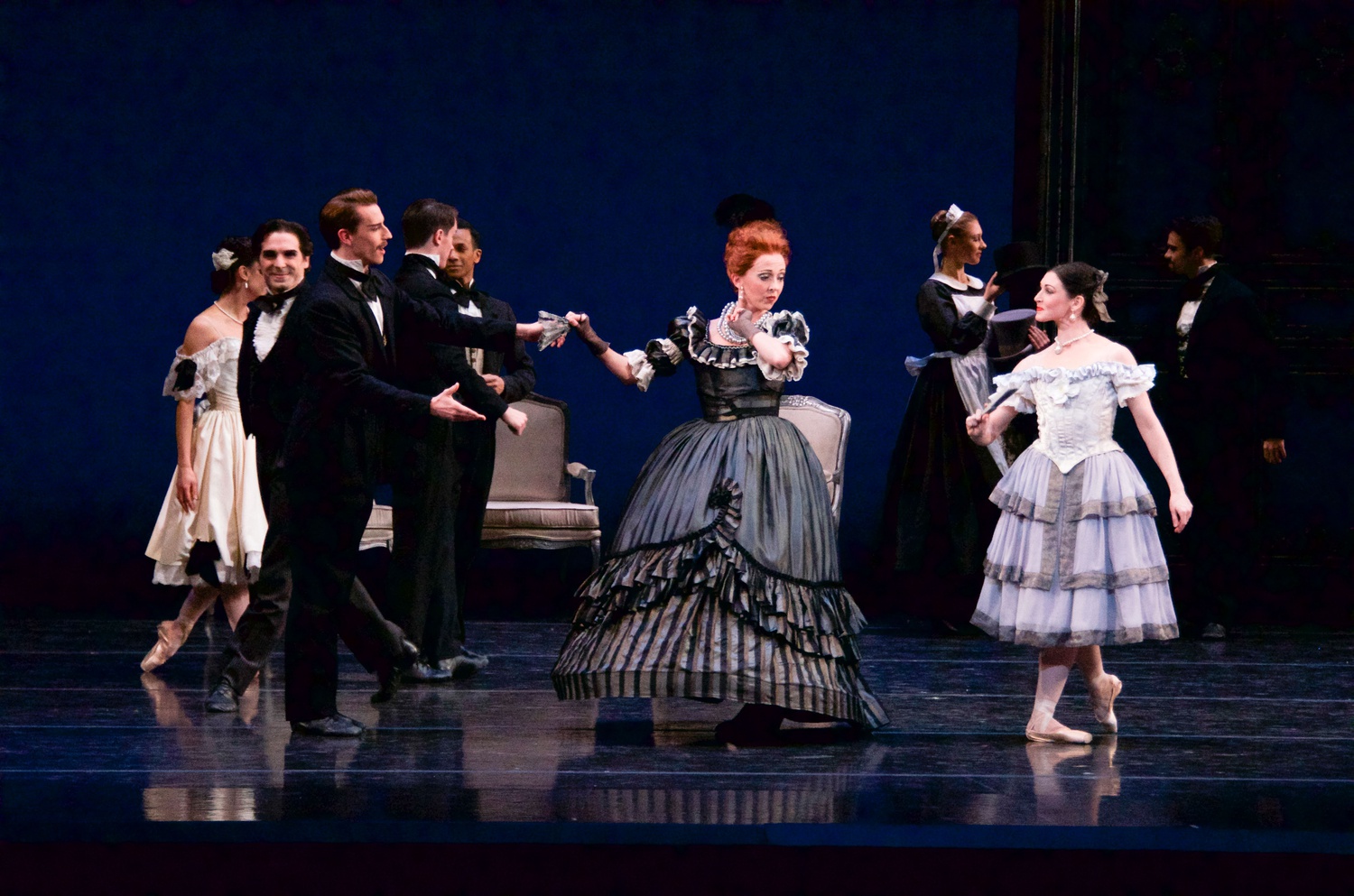 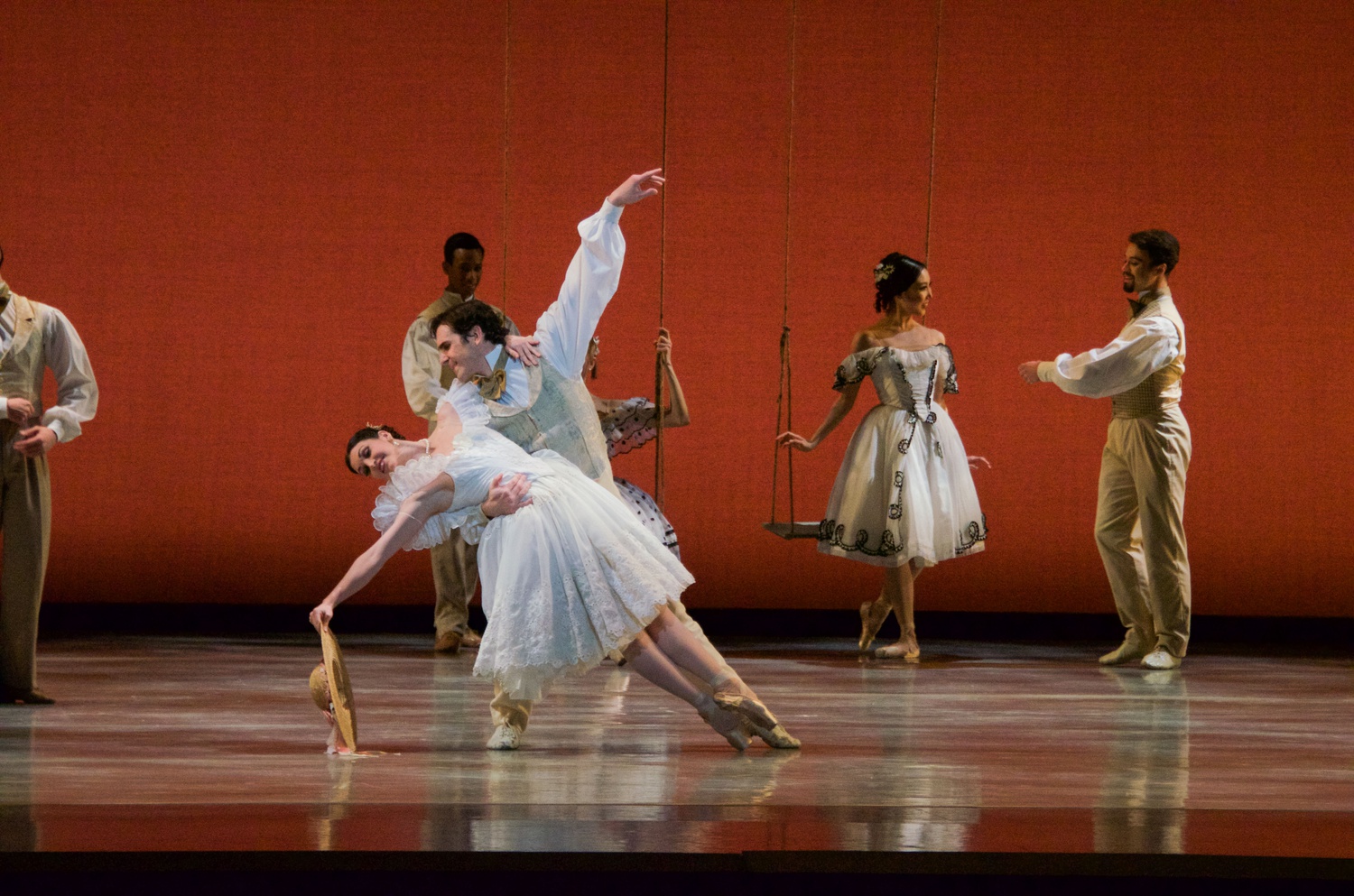 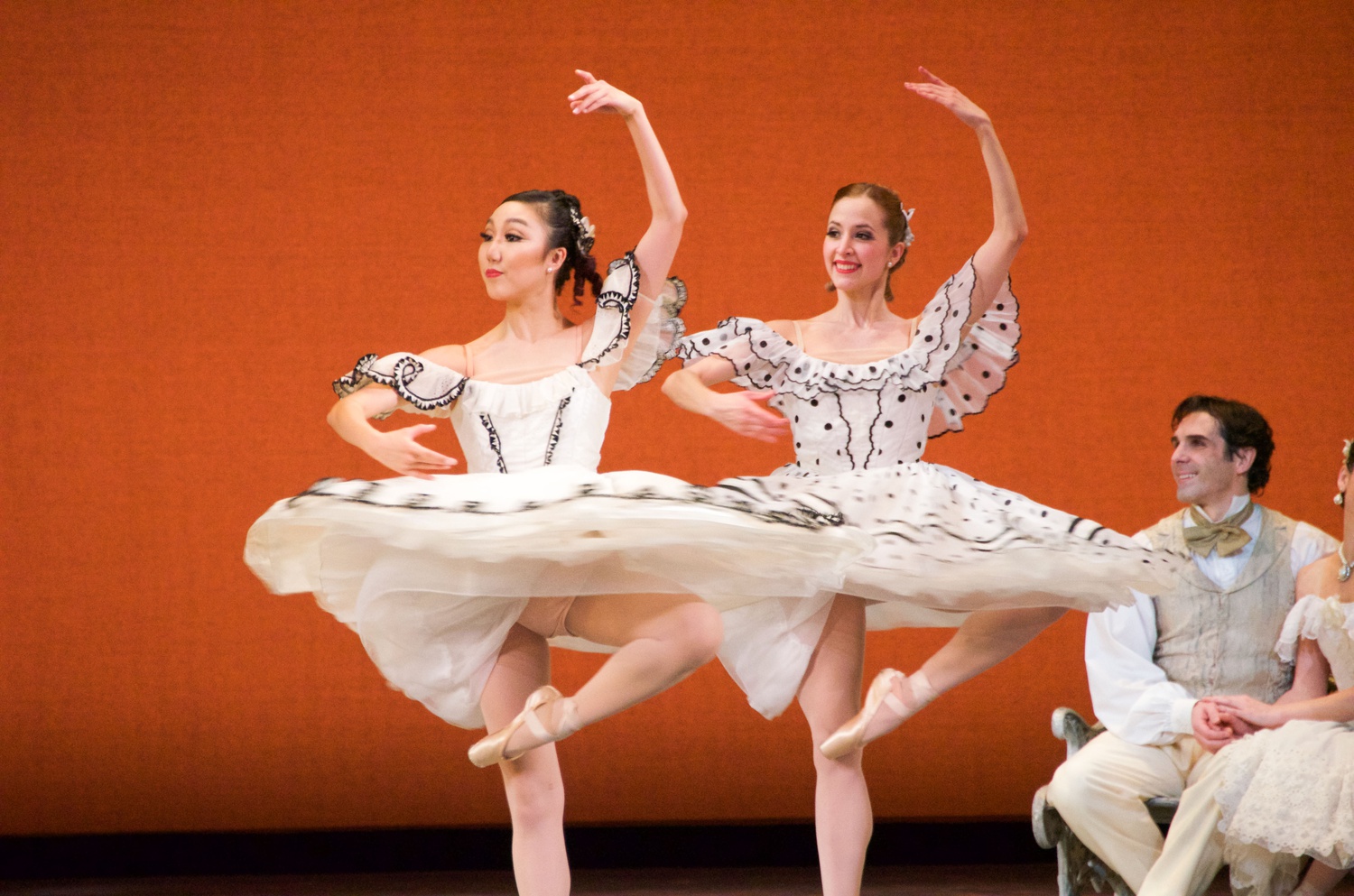 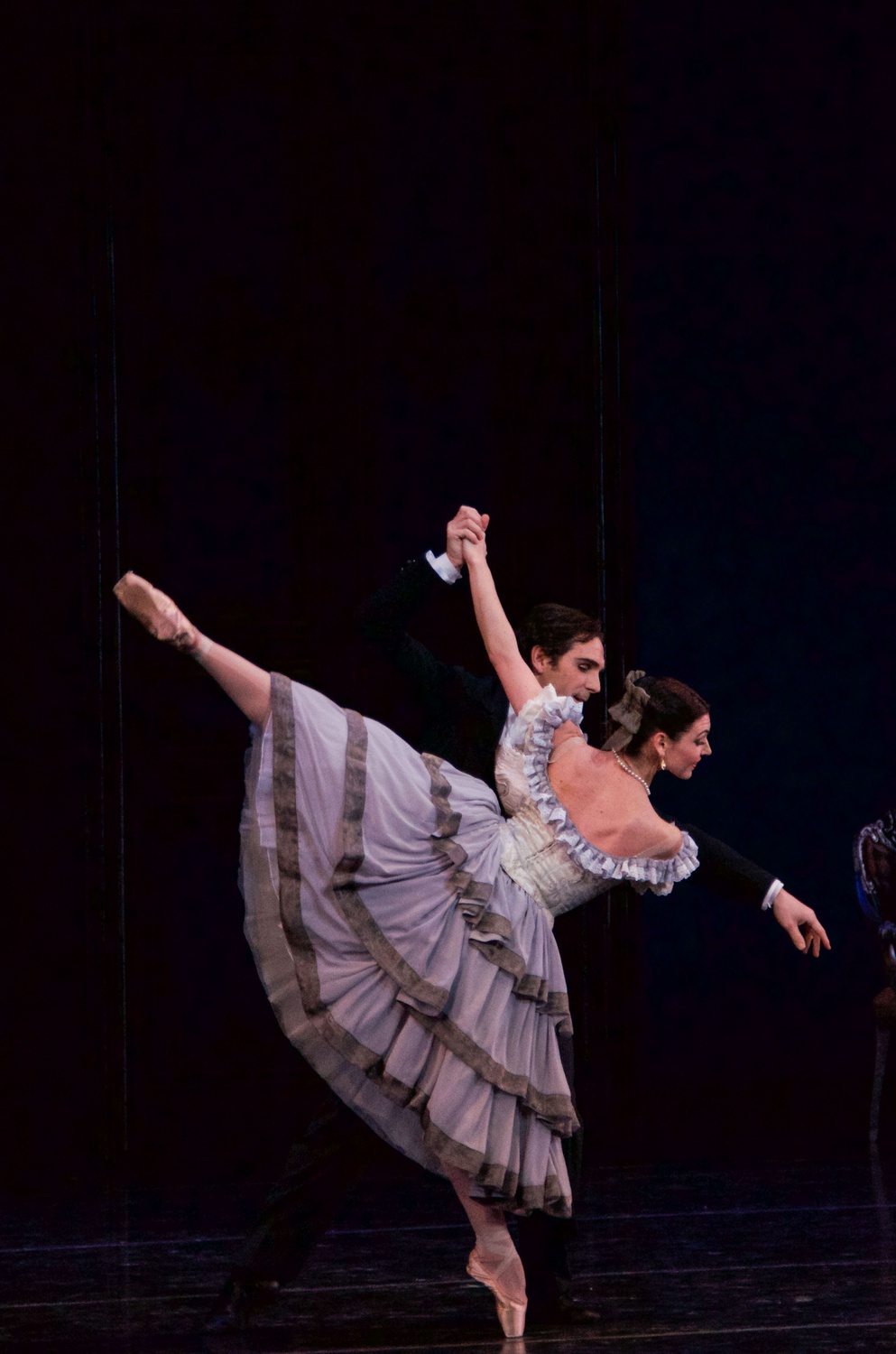 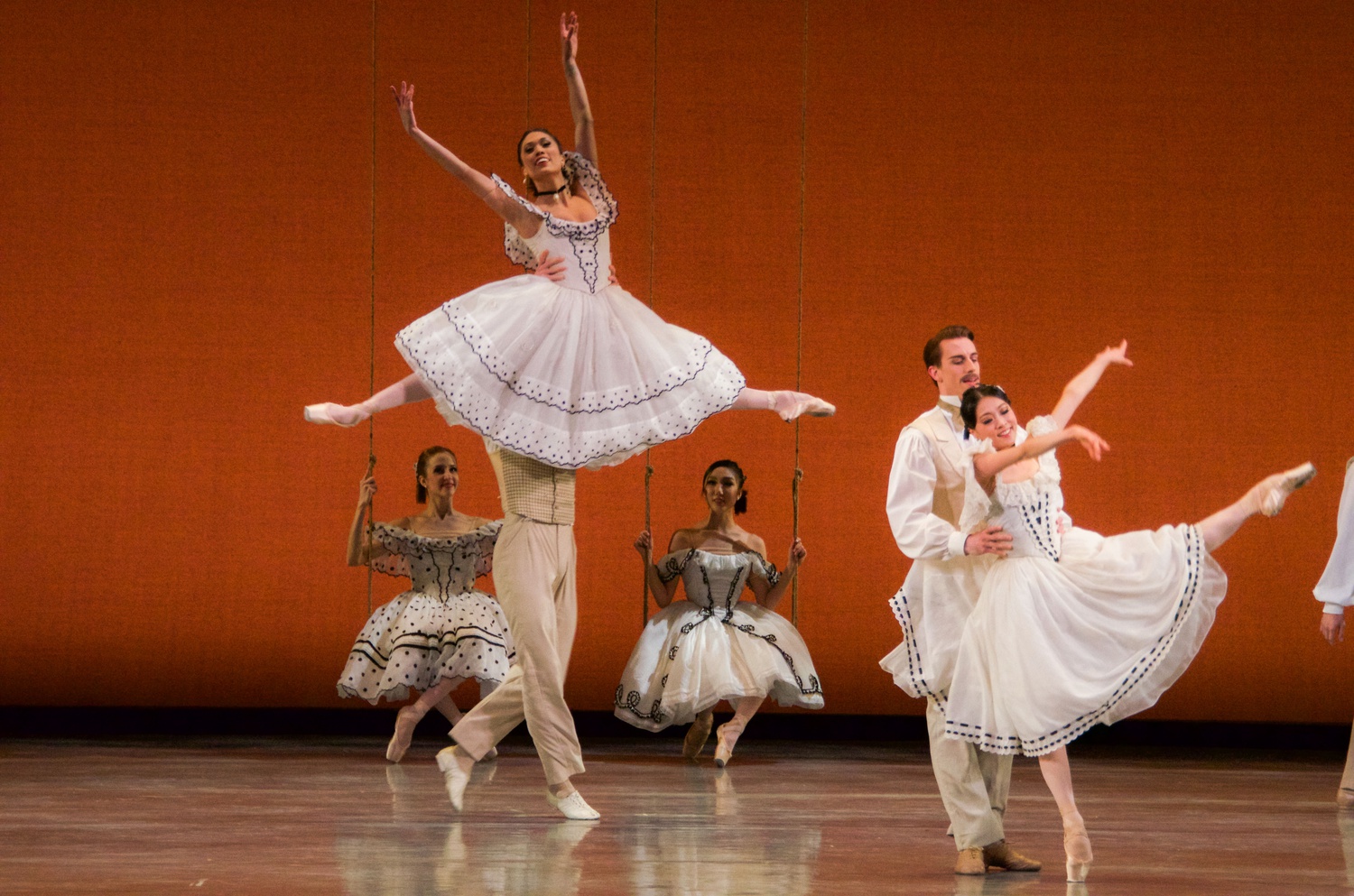 This past week, in commemoration of its twentieth anniversary, Val Caniparoli’s “Lady of the Camellias” premiered at the Boston Ballet. Based on the novel of the same name by Alexandre Dumas, conceptualized by the late Canadian master Norbert Vesak, and set to ravishing yet tender music by Chopin, the Boston Ballet’s “Lady” is a heartfelt expression of love and regret and a delicate meditation on the passing of time. Its opening moments, however, give only the slightest hint of the deep poetic drama that is to come.

A group of French Second Empire society women, brandishing fans and mimed giggles, consort with men in frills who execute fine, if empty, pirouettes and jetés alongside their partners. Theirs is a gilded world where immense, ornate double-doors open without a sound. Dancers literally fall on the floor before their neglecting lovers, only to spring up again with a horrifying mechanical immediacy, as if unable to sustain for even a moment the illusion of being real people who could be put out by sorrow or pain. The toy-like insubstantiality of these society types is matched by Alex Foaksman’s live piano, which has a facetious tinkling music-box quality.

Fortunately, soon the affected gives way to the affecting. Enter two pure-hearted individuals who don't play the love games so well: beautiful, secretly consumptive courtesan Marguerite (Kathleen Breen Combes) and her naïve young lover Armand Duval (Yury Yanowsky), who try to defy society’s rules, with tragic consequences. They are separated from each other by Marguerite’s rich current lover, the Baron de Varville (Bo Busby). The key to this show’s success is the immense sensitivity of the performances given by these principals, who bring great humanity to their roles. Their arabesques are more than arabesques; their acting and moves are finely integrated into the the overall ballet.

It is Yanowsky’s last show, and the fact that he and his wife are performing in the leading roles is evident from the palpable emotional depth in their moments together. When he lifts her, when she kisses him, when they run at each other while the Chopin from the piano reaches an ethereal appassionato—a real excitement, attended by fragility, is there in those pas de deux.

The pair’s acting is no less superb. In one of the greatest moments of the show, Armand sees Marguerite rejoining her rich former lover, the somber Baron. She has been forced to do so without Armand’s knowledge. The apparent betrayal stuns poor Armand. Moaning inaudibly, he lunges into a powerful manège around the stage that reveals how the pain is racking his whole body, twisting him every which way. She hides her unhappiness in order to keep him from hoping, and when he approaches she smiles at him and waves her arms out to the sides coquettishly, as if to say, “What did you expect, boy?” But her mouth visibly trembles as she does it. As soon as she turns away from him towards the side curtain, she leans forward, hands on her face, releasing her well-guarded despair.

Visually, too, “Lady” does not fail to meet the high standards of the Boston Ballet. The costumes by Robert Glay de la Rose, who previously worked for the Met Opera Ballet and has a reputation for meticulous attention to period accuracy, are magnificent in their rich detail and patterns. Glay de la Rose turns Marguerite in the drawing-room scenes into a living version of Ingre’s pensive Princesse de Broglie. The salon doors, designed by David Gano, recall Aubrey Beardsley’s dark, toxic Art Nouveau combination of simplicity and ornamentation. Chandeliers, similarly, are composed of slender dark spider-like lines huddling close together. These gothic overtones of the set in the society scenes of Act I and III, with their wide indigo background like a sky at evening, contrast with the cheerier pink-painted outdoors settings of Act II, where Marguerite lives happily with Armand instead of the Baron. In the lull of this summer love, Gano’s scenery bears the influence of Japanese art, with its flat planes and sharply defined edges, bringing a suspect kind of calm and simplicity to this world. Later the pink background fades into blue again, and in Act III the deep society blue returns to envelope the lovers under its unforgiving mantle.

It is a physically strange experience to sit at this ballet for two hours and watch as the heart’s softest flutters become incarnated in these articulate, professional limbs. The lead dancers take Caniparoli’s finely modulated choreography and render every turn of the leg, every embrace, pregnant with feeling. It is as if the plangent bars of Chopin governing their turns are not music, but life itself and the streaming seasons. They move as if in a dream, yet hyperalive. It is a brilliant performance to see—but, most of all, it’s an immersion.

—Staff writer Victoria Zhuang can be reached at victoria.zhuang@thecrimson.com.