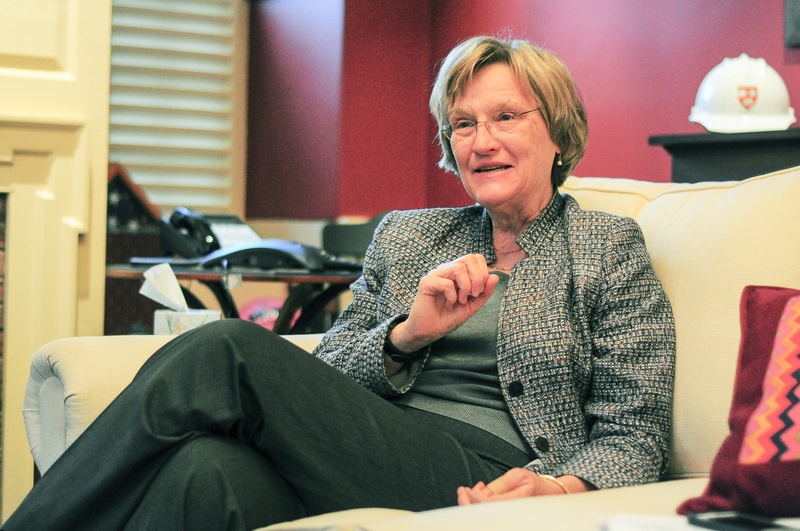 University President Drew G. Faust is defending Harvard’s governance structure after two Harvard Law School professors were sharply critical of the central administration in an op-ed that called for the formation of a faculty senate.

In an interview last week, Faust stood behind Harvard’s current structure, maintaining that the institution’s procedures and decision-making processes duly include representatives from across the University.

In particular, Faust said that while a faculty senate has been proposed, she is not convinced one would work at Harvard.

“I don't personally think that it's particularly well-suited for Harvard because so many decisions are made at the school level and our structures have always organized themselves around that,” Faust said. “I've not heard a drumbeat over the years for such a move here at Harvard. I think...the [Faculty of Arts and Sciences] meeting is regarded by many in FAS as kind of sacrosanct and the place where these interactions happen.”

Faust was responding directly to an op-ed published last week in the Chronicle of Higher Education by Law School professors Charles Fried and Robert H. Mnookin, who argued that Harvard’s central administration and “bureaucracy” had grown extensively. “And the results have not always been good,” it read. The authors also suggested that observers should not assume that the FAS, whose monthly meetings are chaired by Faust, speaks for the whole University.

Fried and Mnookin pointed in particular to the unveiling of Harvard’s University-wide sexual assault policy and procedures last July and the new health benefits plans for non-union employees last fall as examples of decisions that they argued did not involve enough faculty input. But Faust took issue with each of those examples, maintaining that broad input from across Harvard was sought.

"The deans of all the faculties were very involved in discussions throughout the development of [the sexual assault] policy, so it's not that I sat here in my office and just announced these things were going to happen,” Faust said in the interview, which was also attended by her spokesperson, Jeff Neal.

For much of her tenure, Faust has emphasized her "One Harvard" vision—a push to create a more unified institution—which has grown steadily with initiatives from cross-school programs to the first University-wide fundraising drive.

Increasing centralization has faced criticism before at Harvard, which for much of its history has been a relatively decentralized institution. After the 2012 Government 1310 cheating scandal and the revelation that administrators had searched the emails of College resident deans, faculty raised governance concerns over a perceived lack of faculty voice in University decisions.