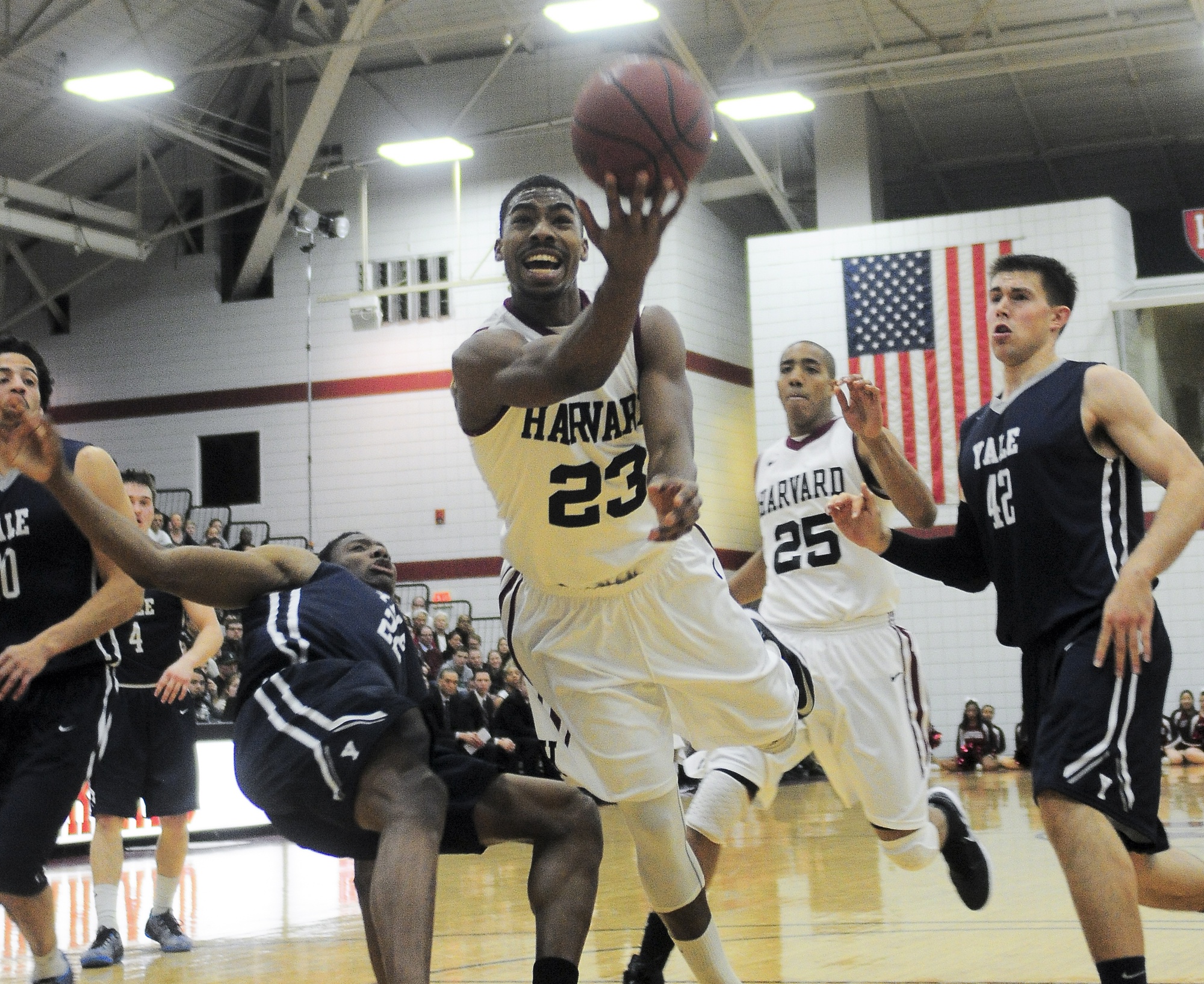 Senior wing Wesley Saunders paced the Crimson with a team-high eight points in the first half on Friday before being held in check for the remainder of the contest in a 62-52 loss to Yale. By Robert F Worley
By David Freed, Crimson Staff Writer

After watching Harvard celebrate an Ivy League championship on its own floor a year ago, the Yale men’s basketball team (22-8, 11-2 Ivy) returned the favor with a vengeance Friday night.

In the most highly anticipated basketball game at Lavietes Pavilion in years, the Bulldogs took control of the game early and led for the final 25:37 in a 62-52 victory over Harvard (20-7, 10-3) that took the Crimson’s Ivy League destiny out of its own hands. Despite not getting a single bucket from its top three-point shooter, junior Jack Montague, the Elis made 7-of-16 from beyond the arc and snagged nine offensive rebounds to overcome 14 turnovers.

“Their ability to get second-chance opportunities in the second half I thought was the difference,” Harvard coach Tommy Amaker said. “Credit to Yale, terrific job by their kids, and [they were] very deserving of victory tonight.”

The two teams’ respective seniors shone brightest. Yale guard Javier Duren—who had 11 points in the game’s final 88 seconds, holding off a Crimson comeback by himself—led all scorers with 22 points on just 11 shots. He added nine rebounds and three assists, picking up the slack for his more heralded teammate, junior forward Justin Sears. The Ivy League Player of the Year candidate had two big threes but otherwise was held in check with more fouls (four) than field goals (three).

On the home side, Harvard co-captain Steve Moundou-Missi had 21 points and 10 rebounds. In a rare display of rage, the senior threw his hands in disgust after Harvard fell down by 10 early in the second half—proceeding thereafter to nearly make up the deficit by himself.

“[Moundou-Missi] was one of the few people who was really battling,” senior wing Wesley Saunders said. “He was trying to spark us and get us energized, but we never really caught on. He played a great game…. He really carried us there.”

The game was eerily similar to the teams’ first meeting, with the visitor taking an early first-half lead. This time it was the Bulldogs, who responded with a 9-0 run when Harvard took the game’s first two-possession lead. The home team rallied, closing to within three points at the half behind eight points from Saunders.

But while Saunders was the star in the first half, he was invisible in the second. The Crimson’s leading scorer and reigning Ivy League Player of the Year did not have a point in the second half until 12 seconds remained with the game already out of reach. The team’s best perimeter defender spent time on Duren, Montague, and Yale senior forward Armani Cotton, serving as a Swiss Army Knife on the other end.

“We ask a lot of Wesley,” Amaker said. “We ask him to be our best player all over the floor, and that takes its toll. He’s capable; he’s done it before. He didn’t do it as well as we needed tonight, [however].”

With its best player struggling, Harvard’s role players failed to provide the spark. Sophomore sharpshooter Corbin Miller missed all nine of his shots, including a number of open looks that Amaker noted he would take from Miller every night. Classmate Zena Edosomwan missed all four of his shots, spending almost the entire game on the bench. Outside of its top three scorers, the Crimson got just 10 points from the remaining six players who saw playing time.

With a game left in the season, Harvard can still force a one-game playoff for the league title with a win Saturday against Brown and a Yale loss at Dartmouth.

“We knew the implications of this game,” Saunders said. “It’s a tough loss, but we have another one tomorrow, so we can’t hang our heads…. Brown isn’t going to come in here feeling sorry for us.”