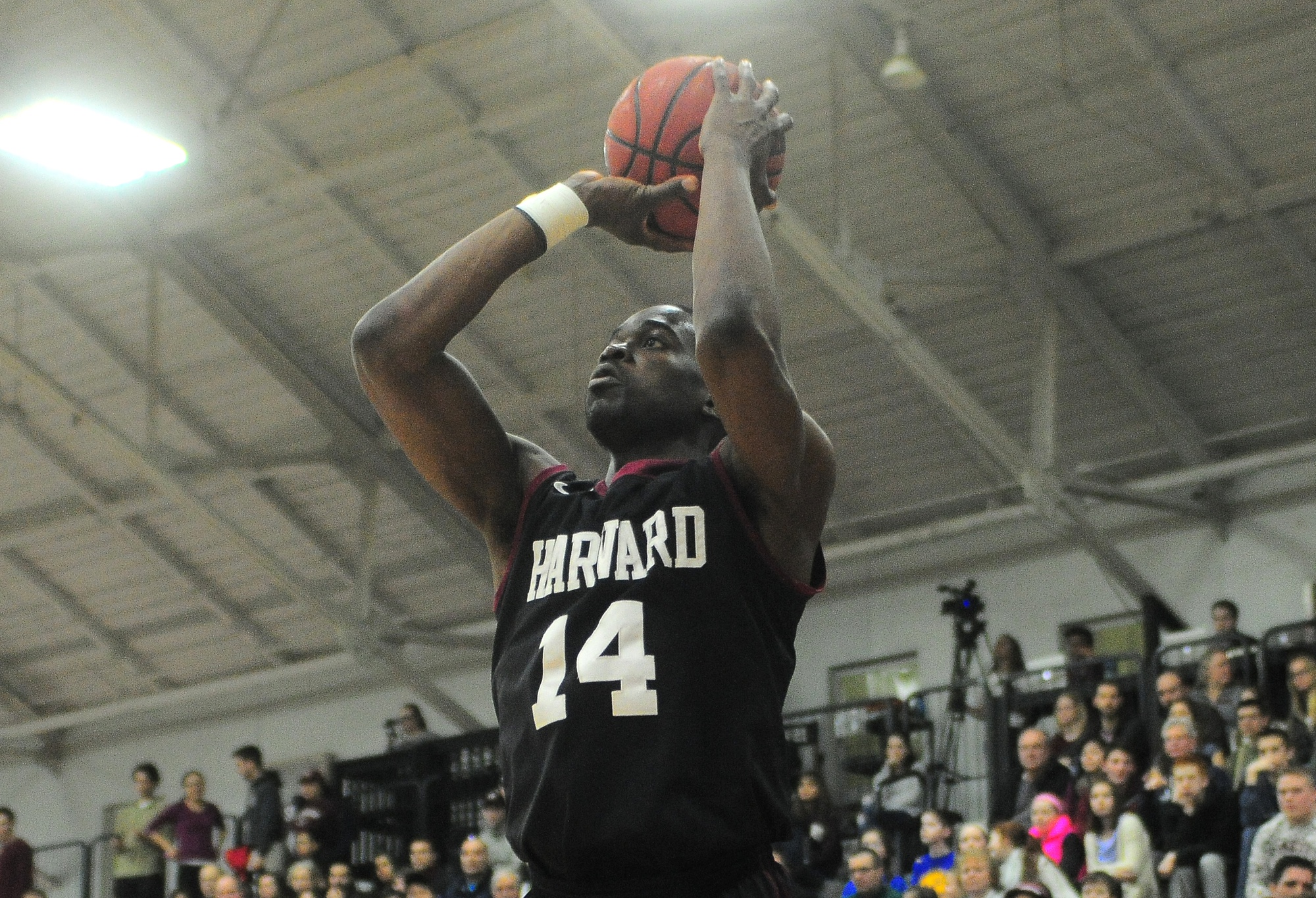 The Crimson finished out the regular season with a 72-62 win over Brown. With Yale's 59-58 loss to Dartmouth an hour later, Harvard and the Bulldogs share the Ivy title and will face off in a one-game playoff to determine which team will represent the Ivy League at the NCAA Tournament.
By Juliet Spies-Gans, Crimson Staff Writer

Just before 9 p.m. on Saturday evening, the Harvard men’s basketball team witnessed the most important play of its season unfold.

And it happened in an arena 130 miles away.

In a wild 13 seconds of action in Hanover, N.H., Dartmouth climbed back from a three-point deficit, knocking down a three and connecting on a last-moment layup to defeat Yale, giving Harvard a share of the Ivy League crown and keeping the Crimson’s NCAA Tournament hopes alive in the process.

If Yale (22-9, 11-3 Ivy) had beaten the Big Green (14-14, 7-7), it would have clinched its first March Madness berth since 1962. But the combination of the Crimson’s own 72-62 win over Brown on and the Bulldogs loss means Harvard and Yale will face off in a playoff game at the Palestra next Saturday to determine who will be competing in the Big Dance.

As the final moments of the matchup in Hanover expired, the Crimson players remained on the sideline of Lavietes Pavilion, circled around a computer that was live-streaming the contest—and the group let out a unified roar as Dartmouth’s game-winning shot went through the hoop.

For Harvard’s title hopes, however, Saturday’s matchup in Lavietes was just as important as the one in New Hampshire.

Behind a 28-13 run to begin the second half, the Crimson did what it was unable to do when it took on Yale Friday night—knock down a series of three-pointers, enabling it to come from behind, take the lead, and, ultimately, blow out the Bears (13-18, 4-10), outscoring the visitors by 11 in the second half.

“What can you say—we’ve talked about how [crazy] our league is,” Harvard coach Tommy Amaker said. “Certainly we’re thrilled to call ourselves Ivy champs for [the fifth year] in a row. It’s an amazing accomplishment…and we’re very hopeful we’ll be ready to go for round three versus Yale.”

While Harvard (21-7, 11-3) was down one after the first period, an offensive outpouring from beyond the arc following intermission created the space it needed to walk off the hardwood with a comfortable victory.

After misfiring on every three-point attempt in the first 20 minutes of play, the Crimson saw junior co-captain Siyani Chambers and senior wing Wesley Saunders hit a trio of triples in the first 2:36 of the second half to give the team a two-point advantage.

The highlight of the spurt came with just over 12 minutes to go, as Travis saved an errant Crimson shot from bouncing out of bounds by throwing a backwards pass into the paint—a pass that skipped in between a Brown defender’s legs before Miller hit a three moments later.

From there, Harvard coasted, going up by as many as 18 before the final whistle blew.

“There were a lot of emotions [tonight],” Saunders said. “We were talking on the bench a little bit about [the Yale matchup], but we were also just thinking that we wanted to finish this game the right way, stay locked in on our task, and worry about the other stuff later.”

With Saturday’s contest marking Harvard’s Senior Night, it was, appropriately, two of the Crimson’s veterans that kept it within striking distance in the first half.

Falling behind by seven in the early going, Harvard relied on the two-man game of Saunders and senior Kenyatta Smith to inch its way back into the contest.

The hot shooting of Brown’s junior forward Cedric Kuakumensah had enabled the team to control the tempo for much of the opening period; the Bears’ leading scorer hit three triples from the left wing in a matter of minutes, matching the entire Crimson squad in scoring through 7:26 of play with 11 apiece.

But a series of short corner jump shots from Harvard’s big men—Moundou-Missi and Travis—brought the Crimson back within one, 20-19. And on two of the next three possessions, Saunders found classmate Smith in the heart of the lane, with the latter scoring both times. The second of those buckets gave Harvard its first lead in almost 12 minutes, and marked Saunders’s fifth assist to Smith in the first 17 minutes of play.

On the night, the Bears were paced by Kuakumensah, who tallied a game-high 23 points in 38 minutes. Four players scored in double figures for Harvard, with Chambers leading the pack with 15 points and Saunders, Travis, and Smith notching 12 points apiece.

“[It was] just a really good team effort by our kids, especially coming off of last night,” Amaker said. “We use the phrase [‘regrouping and responding’] all the time…and I can’t imagine our teams have been able to do that any better than we did tonight.”

On Saturday, Harvard needed a little help from a conference rival to give its postseason hopes some life. But when it takes on Yale next weekend in an attempt to punch a ticket to its fourth consecutive NCAA Tournament, it’ll have to rely solely on its own means to come out on top.

And the Crimson can’t wait for that moment.

"To have an opportunity to play to be the ultimate representative in the NCAA Tournament next weekend—what an opportunity for our team," Amaker said. "[This] is a big lesson to just keep your head down and keep going, just keep going.”