Members and supporters of the activist group Divest Harvard began a planned blockade of three entrances to Massachusetts Hall on Sunday and were still rallying outside the building in protest of Harvard’s investment in fossil fuel companies late that evening.

At least 150 protesters had gathered in front of Mass. Hall by 8:50 p.m. on Sunday for a round of addresses and chants in front of the main entrance to the building, which houses the offices of top Harvard officials including University President Drew G. Faust. Some protesters held a long banner with the words “Heat Week,” the name for Divest Harvard’s planned week of protests, and blue neon signs that read “Divest from fossil fuels.” Others, carrying large backpacks, provisions, and tents, settled down near the entrances and pulled out their laptops, preparing for a long stay. 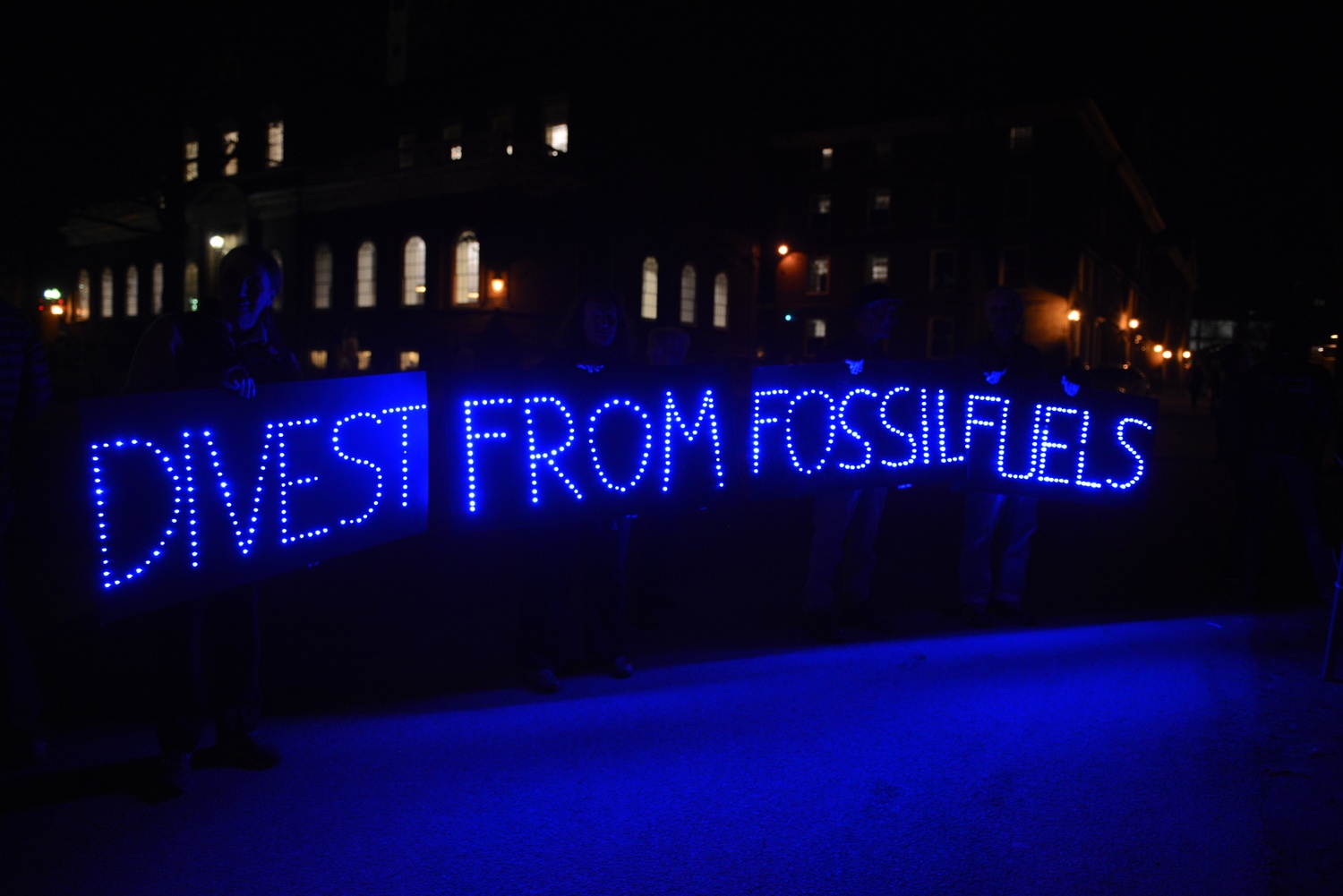 Members and supporters of activist group Divest Harvard hold signs and banners in front of Massachusetts Hall on Sunday night. The group says it plans to blockade the administrative building until Friday. By Alana M Steinberg

Around 9:15 p.m., Dean of the College Rakesh Khurana was seen near Mass. Hall speaking with protesters.

At the rally, climate activists, many of whom were accessorized in neon orange scarves, buttons, and headbands, sang protest songs in support of the students blocking the Mass. Hall doors. Protest leaders including environmental activist Bill E. McKibben ’82, the leader of the environmental group 350.org and a former Crimson president, and former Colorado Sen. Tim Wirth spoke to the crowd, encouraging the members to support the blockade throughout the week.

The protesters are demanding that Harvard divest its $35.9 billion endowment from fossil fuel companies. Divest Harvard organizers have said “hundreds” of activists are willing to be arrested in the effort.

“Climate change is moving quickly, and we need action now,” McKibben said in an interview after his brief address. “[The protest] is a chance for us to remind Harvard to do more than talk.”

The first round of protesters made their way to the entrances of the central office building at about 7:30 p.m., when the group’s co-coordinator, Talia K. Rothstein ’17, and three other members walked by Harvard University Police Department officers at the front door, exchanged some pleasantries, and leaned against the main entrance.

From the start of the blockade, protesters interacted civilly with a growing number of HUPD officers, who originally prevented residents of Mass. Hall, which houses some freshman bedrooms, from entering their dormitory. Shortly after the blockade began, a few students were kept from entering Mass. Hall dorm rooms for around 15 minutes, when freshman resident dean for Ivy Yard Michael C. Ranen arrived and cleared their entrances with HUPD officers.

“My residents need to be able to get in and out as needed anytime,” Ranen said to a group of officers and protesters in front of Mass. Hall A Entryway. A few minutes later, another student tried to enter the building and could not do so immediately. Ranen added in an interview that he will come back to Mass. Hall as needed to make sure that freshmen may come and go from their rooms as they please.

Divest Harvard - Members and supporters of activist group Divest Harvard hold signs and banners in front of Massachusetts Hall on Sunday night. The group says it plans to blockade the administrative building until Friday. 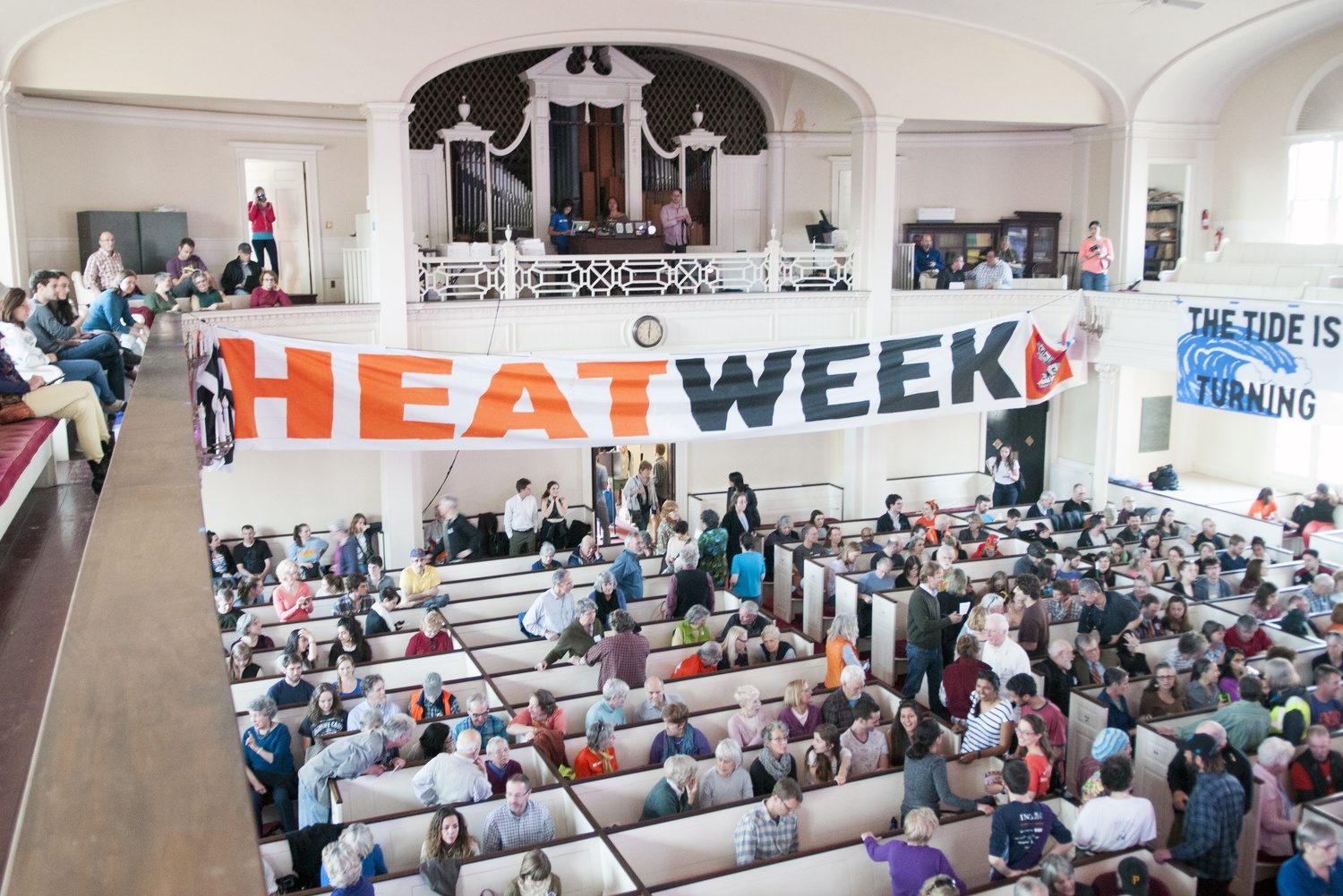 'Heat Week' - Over a hundred students, alumni and supporters gathered in the First Parish in Cambridge on Sunday evening to kick off "Heat Week." 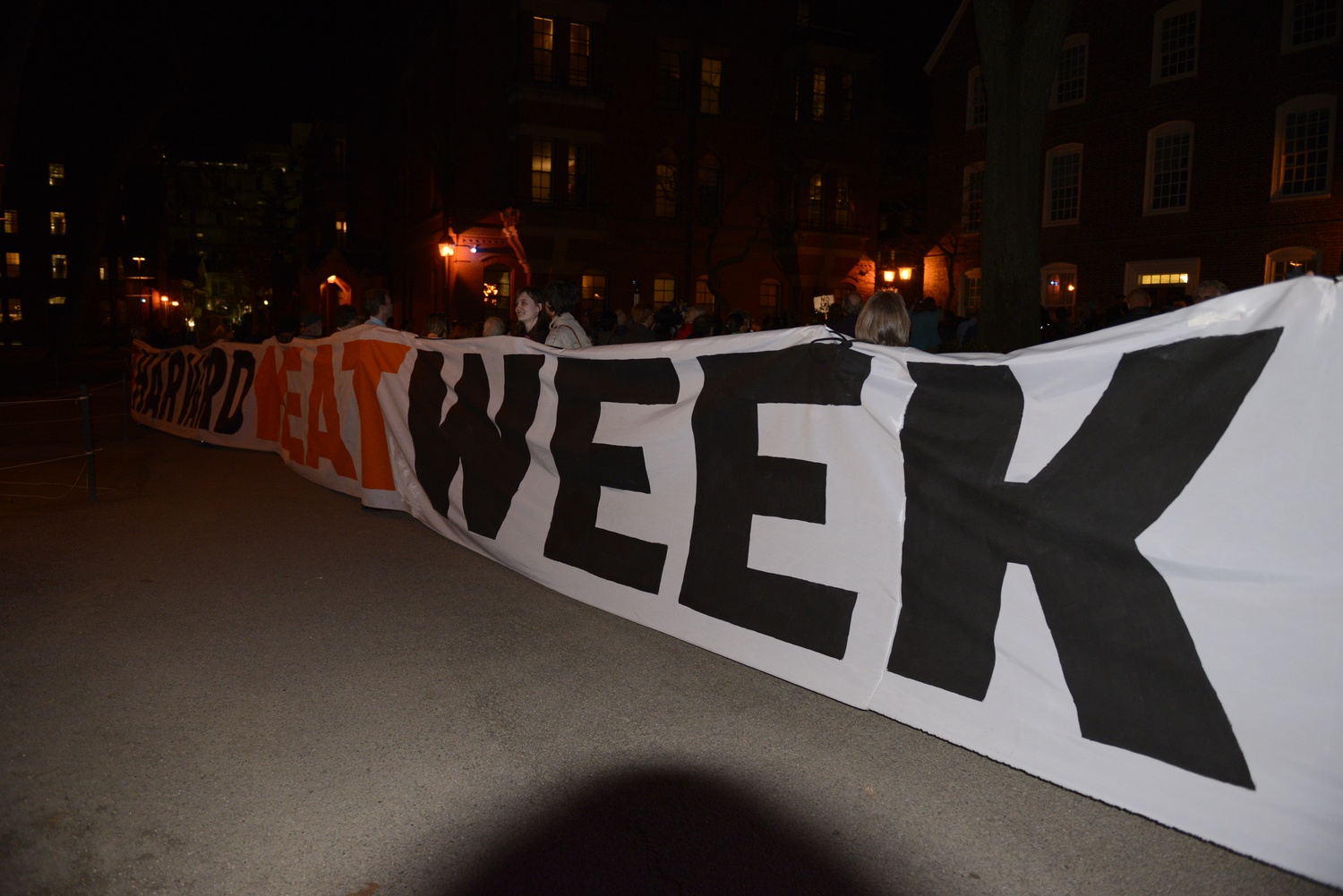 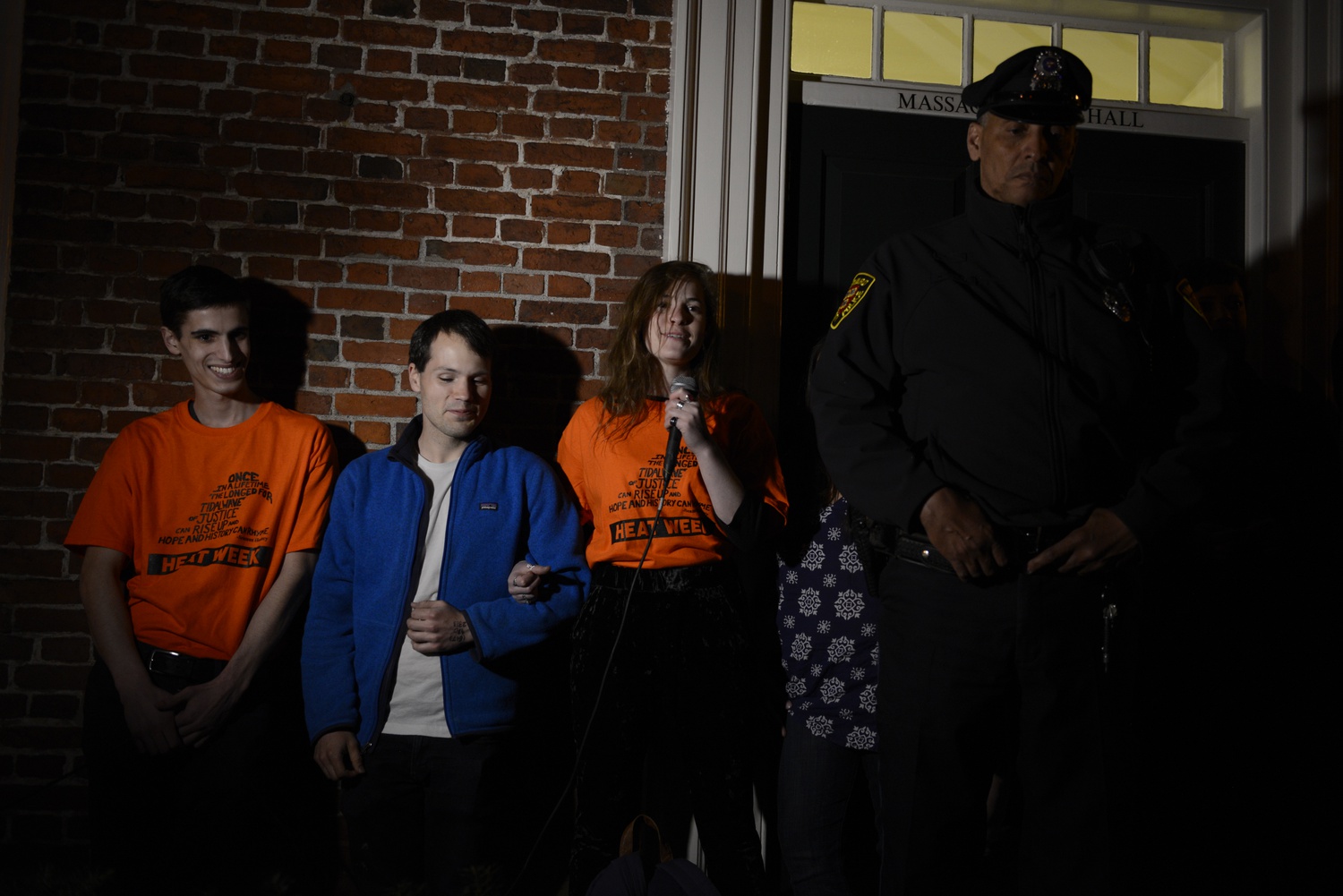 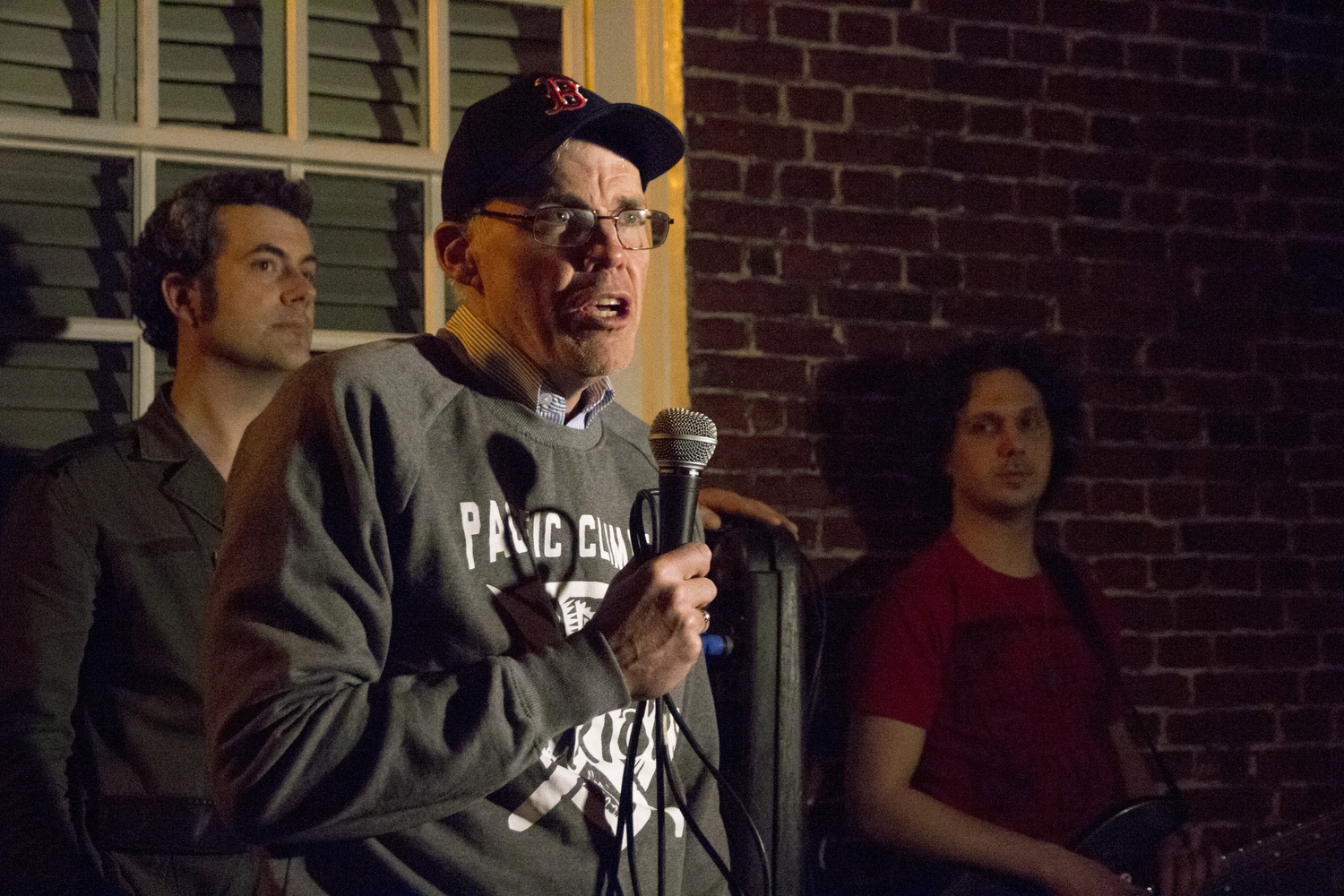 McKibben on Divestment - Environmental activist and former Crimson President Bill E. McKibben ’82 speaks about divestment to a crowd of at least 150 people during the first rally of Harvard “Heat Week” on Sunday evening.

The day began long before the protesters took their posts at Mass. Hall. The group announced plans for “Heat Week” in February and made plans for the blockade public last week. On Sunday at 4 p.m., nearly 50 Divest Harvard members and affiliates, including members from 350.org, gathered at the First Parish in Cambridge to go over the plans for the week and guidelines for their civil disobedience, which included not using physical or verbal violence, carrying weapons, or destroying property.

The protesters were also briefed about interacting with the police and the risk of arrest. Lee D. Goldstein, a lawyer at the Massachusetts Defense Committee of the National Lawyer’s Guild, has said the guild will represent anyone who is arrested at the blockade.

Divest Harvard was founded in 2012 and has, in the last year, increasingly turned to tactics of civil disobedience. Last May, Divest Harvard member Brett A. Roche ’15 was arrested, but not charged, when he prevented a Harvard employee from entering Mass. Hall during a blockade of the building.