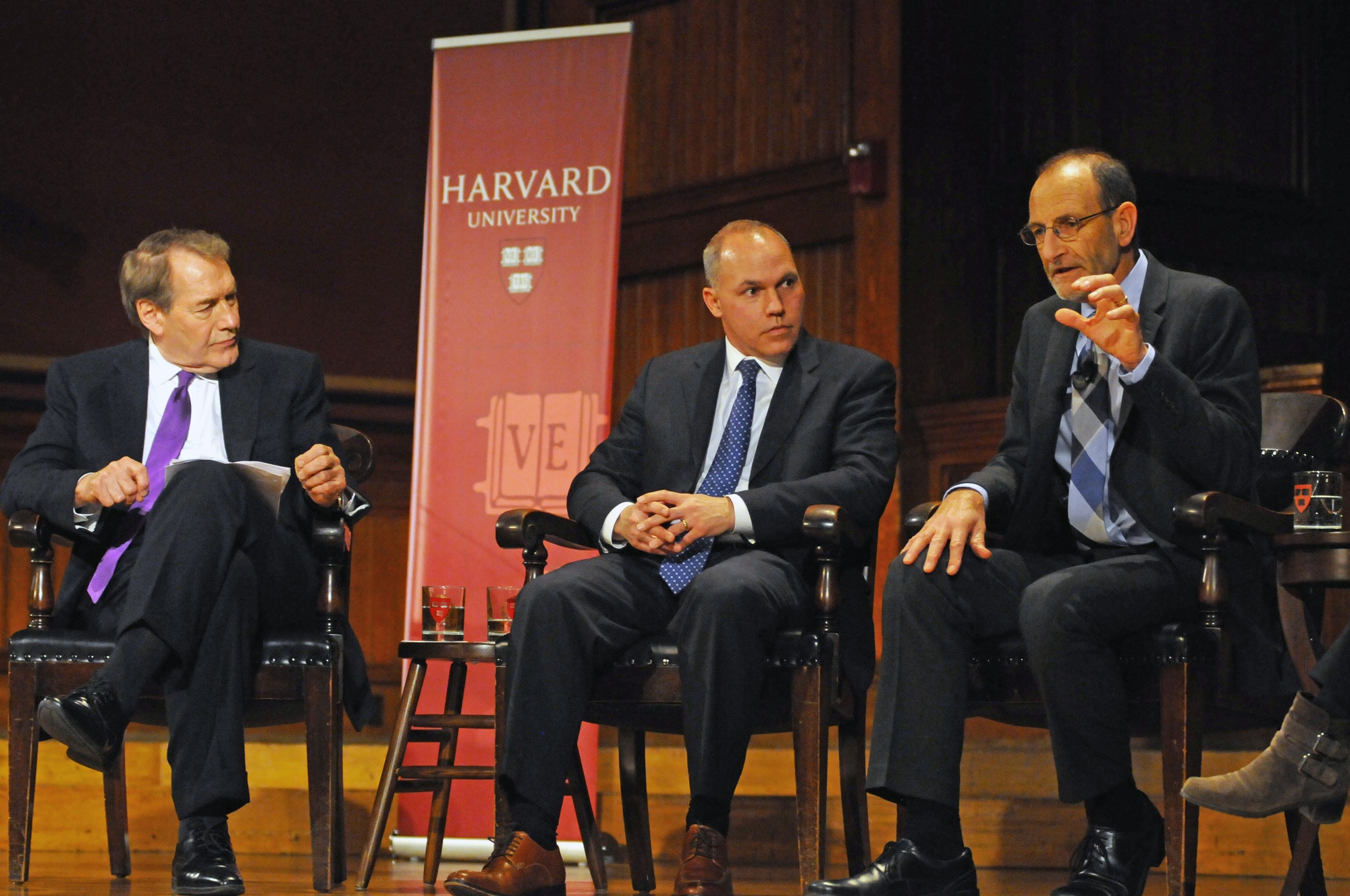 Christopher B. Field ’75, member of the Harvard Board of Overseers and co-chair of Working Group II of the Intergovernmental Panel on Climate Change, speaks to the economic and social conditions for finding climate change solutions. Field was one of seven panelists at an event moderated by talk show host Charlie Rose on Monday afternoon.
By Andrew M. Duehren, Crimson Staff Writer

University President Drew G. Faust did not address Divest Harvard’s ongoing blockade of Massachusetts Hall, which houses her office, when she introduced a panel discussion on climate change on Monday. After Faust introduced the panel, the group of seven climate change experts and talk show host Charlie Rose, who moderated the discussion, covered topics ranging from national energy policy to divestment at Harvard.

After an hour of moderated discourse in Sanders Theatre, Rose—a popular television personality—opened up questions to the crowd.

The conversation between experts comes as members of Divest Harvard blockade Mass. Hall to protest Harvard’s investment in fossil fuel companies. Protesters plan to block all three entrances to Mass. Hall, the University's central administrative building, for the rest of week. Another set of protesters planned to stay Monday night at the Harvard Alumni Association. 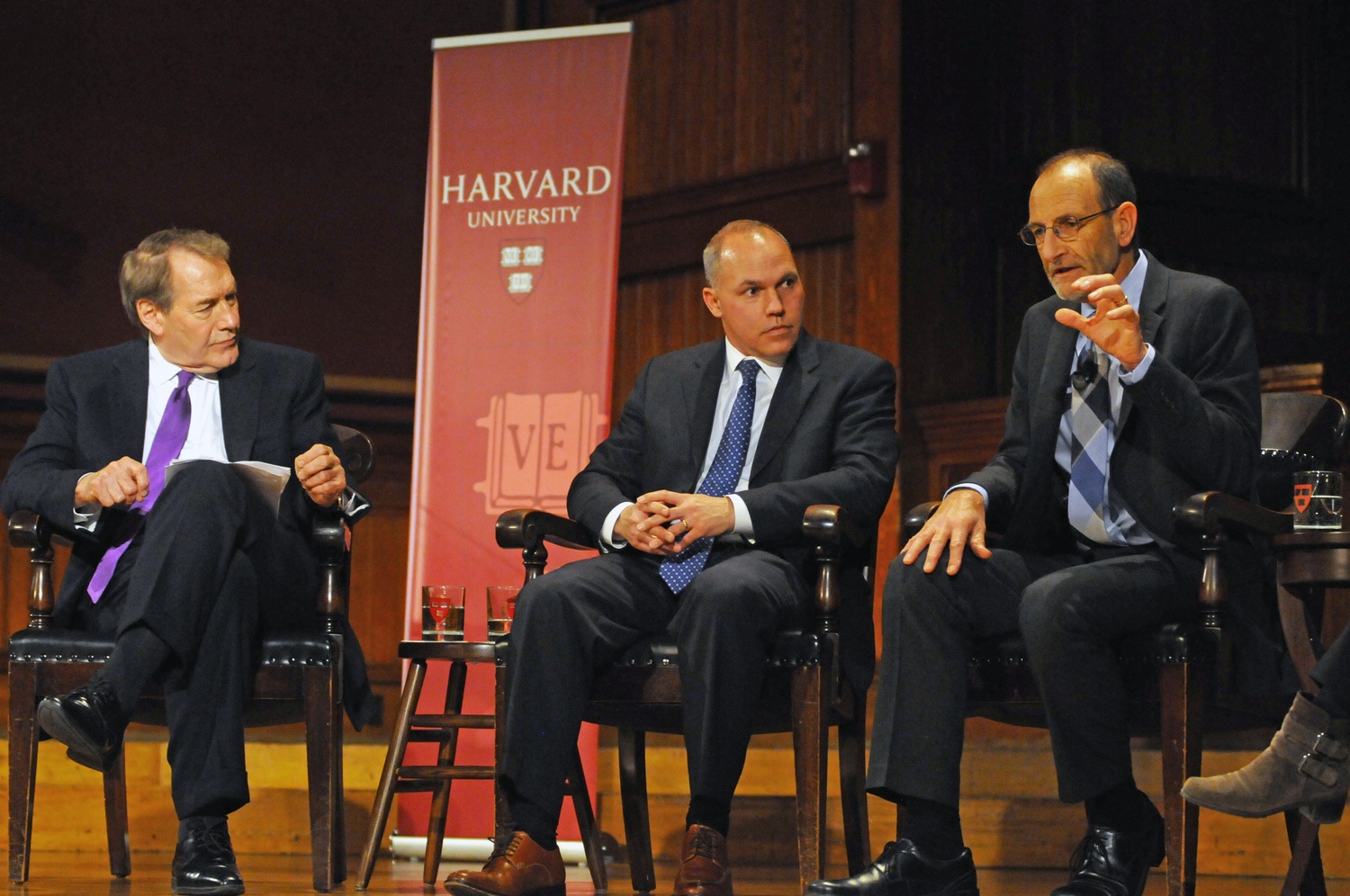 Christopher B. Field ’75, member of the Harvard Board of Overseers and co-chair of Working Group II of the Intergovernmental Panel on Climate Change, speaks to the economic and social conditions for finding climate change solutions. Field was one of seven panelists at an event moderated by talk show host Charlie Rose on Monday afternoon. By Anneli L. Tostar

President Faust made no mention of either occurrence.

“Universities have a crucial role to play,” Faust said at the beginning of the climate change panel. “We act through our research, our educational programs, our embrace of sustainability on campus, our engagement with the wider world. What medium we choose depends critically on how we engage with others. ”

Faust has long said that Harvard should not divest from fossil fuels, though she did not discuss the issue at Monday’s event.

Some professors said they have advocated for an open discussion to engage with Faust on the issue of divestment at Harvard.  James M. Recht, an assistant professor at the Medical School, and Bruce L. Hay, a Law School professor, said they were disappointed that that Monday’s event did not address that request.

The panel, on the other hand, did address the topic of divestment, and different members debated how the University should engage the question of divesting the endowment from fossil fuels.

“I don’t see how we can have the conversation we’re having here and still continue to invest in companies that are building more fossil fuel infrastructure,” said Naomi Oreskes, a History of Science professor and a member of Harvard Faculty for Divestment. Her comments were met with applause from the crowd.

But the panel was not united on the issue. For her part, Rebecca M. Henderson, a University professor, said that, while she supports divesting from the coal industry, she does not think divesting from all fossil fuels is an effective approach to the broader problem of climate change.

“The reason I’m so nervous about [divesting from] all fossil fuels is...all fossil fuels companies aren’t the same,” Henderson said. She later added, “I fear that making a decision that would be seen as very political might hurt the long-term standing of the University.”

In addition to Henderson and Oreskes, the other panelists included: Joseph E. Aldy, an assistant professor at the Kennedy School and former White House energy staffer, Christopher B. Field ’75, a member of Harvard’s Board of Overseers and a Stanford professor, John P. Holdren, a White House energy adviser, Richard G. Newell, a Duke professor, and Daniel P. Schrag, a Harvard geology professor.

—Meg P. Bernhard contributed to the reporting of this story.