Dean of the College Rakesh Khurana begins the panel discussion on the College’s honor code by talking about the impetus for the honor code on Monday evening at the Barker Center. By Jennifer Y Yao
By Noah J. Delwiche, Crimson Staff Writer

Just months away from rolling out its first-ever honor code, the College hosted an event Monday where panelists addressed questions about the potential efficacy of the code as well as concerns about the impending affirmation of integrity mandate.

Several of the undergraduate members of the Honor Council, the student-faculty body that will hear cases of academic integrity starting next fall, attended the event as audience members. The non-undergraduate constituency of the body is yet to be named. Dean of the College Rakesh Khurana will appoint the remaining members of the Council—faculty, administrators, and teaching fellows—this summer, according to a handout distributed at the event. The full membership will be announced in August, according to the same document.

The event, which attracted more than 50 attendees, featured two undergraduate panelists, Carlton E. I. Christian ’17 and Olivia Z. Zhu ’15, as well as Chemistry professor Eric N. Jacobsen and Ann Marie E. Sousa, an administrator in the Office of Undergraduate Education. All but Christian are members of the Academic Integrity Committee, which designed the Honor Code that the Faculty of Arts and Sciences approved last May and will go into effect next semester.

Khurana and Brett Flehinger, the current secretary of the Administrative Board and soon-to-be secretary of the Honor Council, opened the event by extolling the work that students, faculty, and administrators have put into the honor code before moving to an open question and answer period.

Several undergraduates in the audience questioned the efficacy of the honor code in fostering a cultural change around academic integrity at the College, which administrators and students working on the code have frequently referenced as a goal. 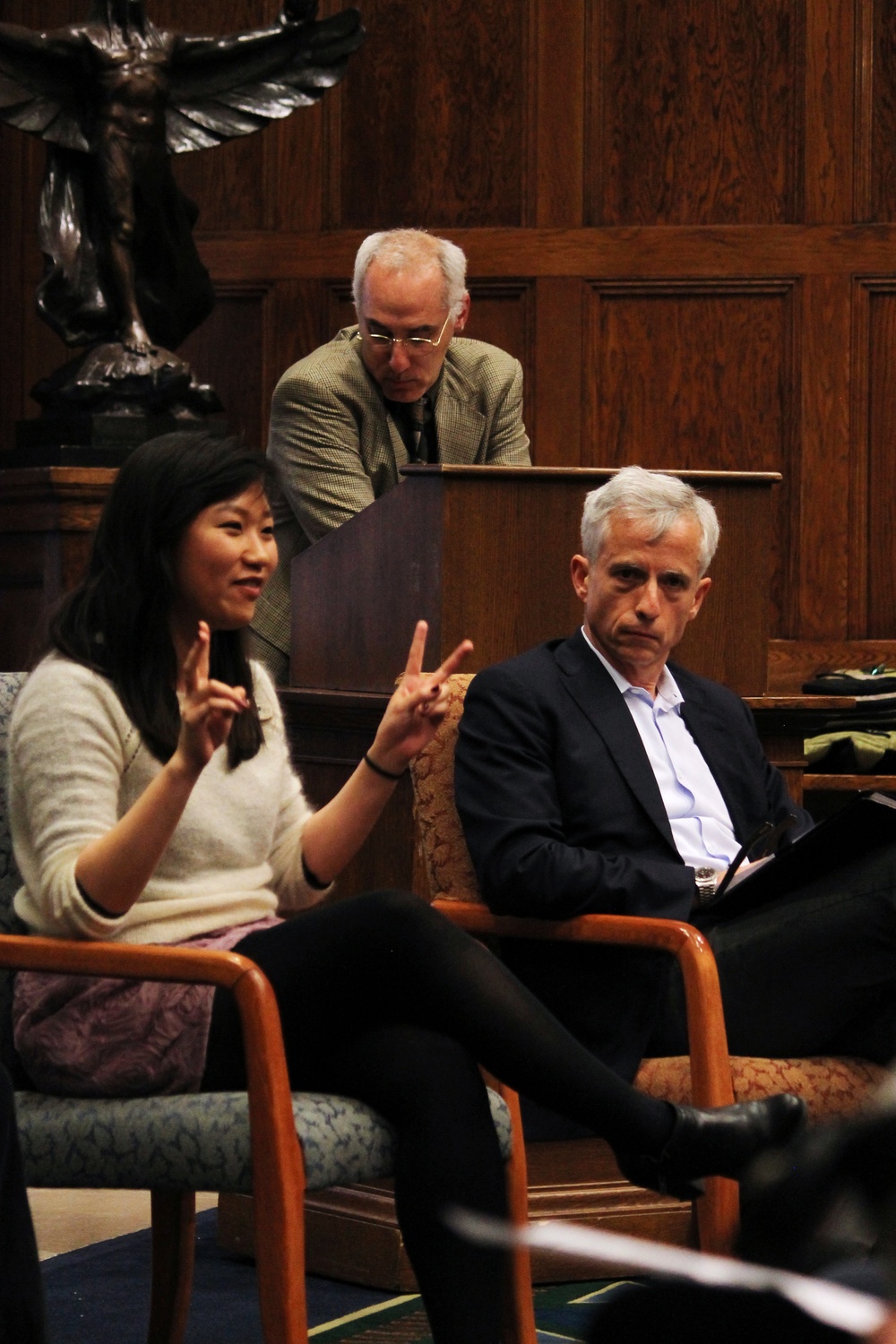 Olivia Z. Zhu ’15, who has served on the Academic Integrity Committee for 3 years, speaks about honor codes at Harvard’s graduate schools and Radcliffe College, and the student voice in creating the College’s honor code at the Barker Center on Monday evening. By Jennifer Y Yao

Undergraduate Council Representative William A. Greenlaw ’17 said he worried that undergraduates may quickly affirm their awareness without necessarily valuing the honor code’s ideals. Henry Burnam ’16 argued that the design of the affirmation of integrity was “very dangerous” to a perceived mission of a liberal arts education to question authority and the “normalization” of “dogma.”

“It reinforces structures of power while failing to actually address the problem at hand,” Burnam said, later adding that requiring undergraduates to reflect on the honor code was “an essentially meaningless activity.”

Flehinger additionally confirmed that there “would certainly not be a sanction” for freshmen who opt out of writing a response.