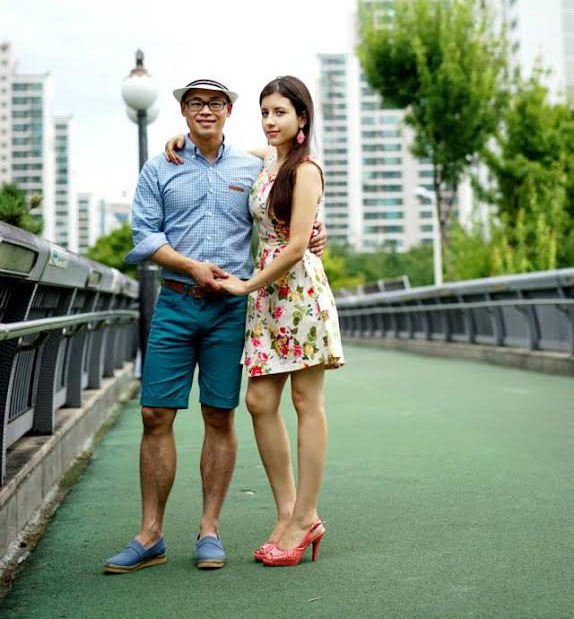 When you got married: We got engaged in South Korea in January 2014. When Moonhyung came back to Boston, we immediately applied for a marriage license and eloped in February of this year. It probably all seemed crazy to everyone, and I guess it was a bit crazy for us too but we couldn't wait. The big wedding ceremony is currently in the works, which is exciting.

By Courtesy of Dina M. Perez

Most Memorable Date: The summer after junior year, I went to Korea to intern at the Korea Herald, and Moonhyung was also there at the time. We ended up taking a trip to the southern region of the country and we spent the whole time talking and having meaningful conversations about our existence, our dreams and regrets, and all the things that mattered to us. We learned a lot about each other on that trip so it was definitely memorable.

Three words to describe yourselves as a couple: We both are short, silly, and smile a lot. I think it is because of those commonalities that people sometimes say we look alike even though we are of different races.

What your friends would say about you: People usually say we are outgoing and genuine. I'd say both of us are pretty loyal friends.

Something you’ve always wanted to tell people: Despite the complaints of liberal arts naysayers, the things you learn at Harvard can and will be useful at some point of your life. I actually started studying Korean right before I met Moonhyung and out of pure luck, one day we met and we just clicked. Now, all that hard work I put into my Korean language and culture classes is paying off, as I can connect with Moonhyung and my in-laws on a deeper level.

An anecdote that captures your relationship: The day we got married, we walked around the Newbury-Prudential area and spent too much time snacking at the mall because we are foodies. Then we ended the day by going to a sushi buffet. We love to eat and sometimes in huge portions so it was fitting that we spent such a special day eating to our hearts' content.

In 15 minutes you are: Sitting outside on the porch drinking coffee and eating toasted ddeok (Korean rice cakes).