Barriers to Entry: Public Service at and After Harvard 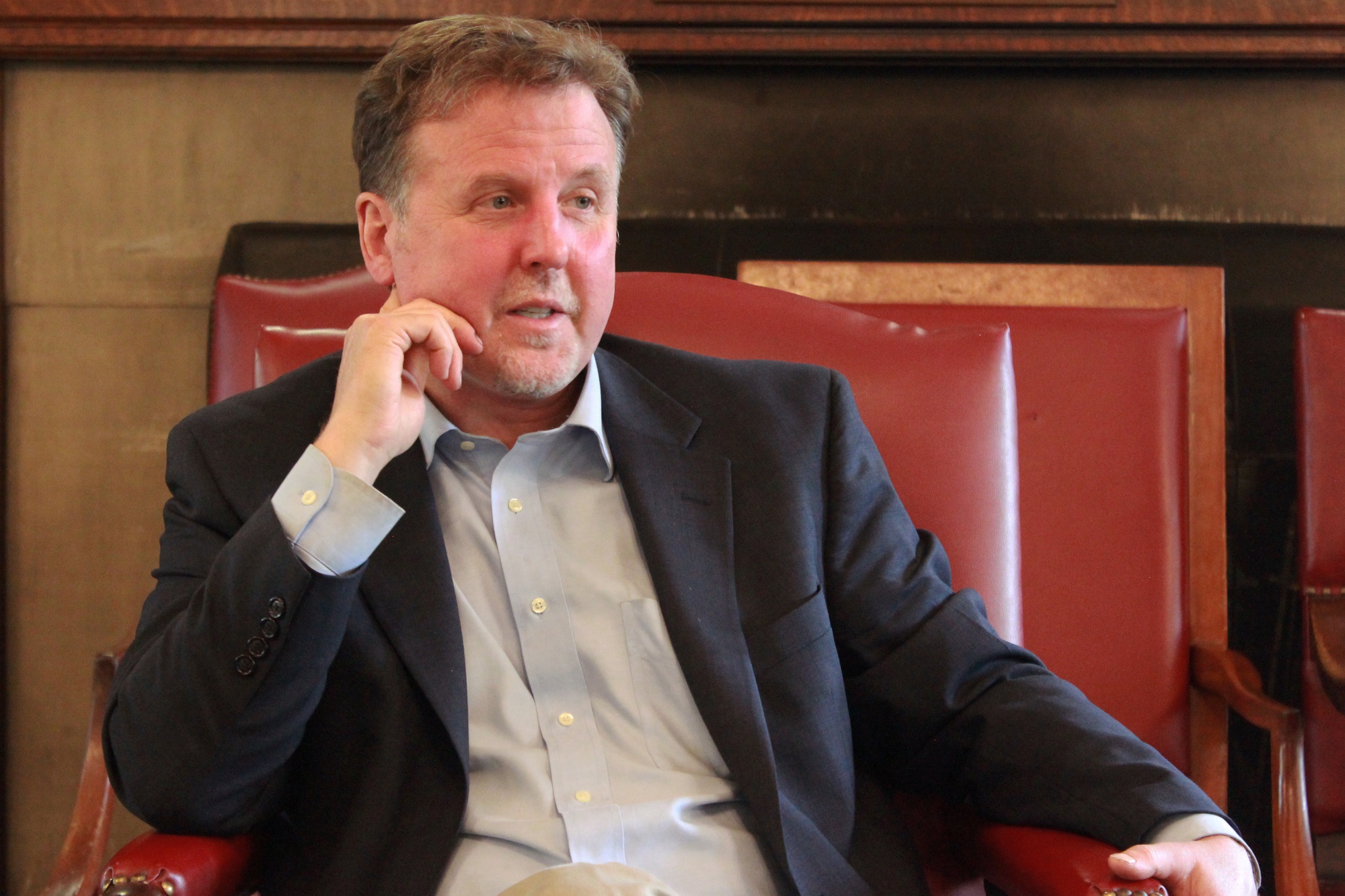 When Economics concentrator Jing Qiu ’16 came to Harvard in the fall of 2012, she quickly joined the Harvard College Consulting Group, anticipating a potential career in consulting. But she soon found another calling: volunteer work with the Phillips Brooks House Association, Harvard’s dominant public service umbrella group.

“My parents brought me up with the belief that it’s everyone’s responsibility to give back—you need to do something for society,” Qiu said, referencing her shift in interests, which she has maintained through extracurriculars and internships. “You can’t go through life doing your own thing and ignoring the issues and problems that your community is facing.”

Qiu’s commitment to public service, however, has not been without its difficulties: As a first-generation college student, she faced financial pressures in finding employment that would support her mother as well as the preconceived notions of her immigrant family about the public service sector.

And as critics both in and outside Harvard heatedly debate whether the College sends too many of its graduates to careers in finance and consulting, Qiu finds herself far from alone in the challenges she has found in her participation in public service at Harvard.

About half of the student body engages in volunteer or service work during their time at the College, according to Travis A. Lovett, the director of the Center for Public Interest Careers, and many indeed face similar hurdles of time and money, both at the extracurricular level and later on when seeking internships and employment in non-profits and government work. And while College administrators seek to address these difficulties with limited resources, they must also contend with job market and economic realities outside of their control.

For many students, formulating postgraduate plans can be a highly structured and well-resourced process. Harvard seniors interested in finance and consulting careers are greeted with coordinated efforts on the part of potential employers, who travel to campus to provide information and conduct interviews to fill what Robin Mount, the director of the Office of Career Services, calls “classes” of incoming employees.

Graduating seniors interested in public service, however, face an uneasy job market populated by employers without the same resources to recruit and hire graduates for their organizations.

To introduce more structure to the job search process for these students and to facilitate direct conversations with non-profit and governmental agencies, the College offered its first public service recruiting day last November. The initiative brought 20 public service organizations to campus for job discussions and interviews with 99 selected seniors, ultimately resulting in a dozen accepted offers of employment, according to Gene A. Corbin, the College’s assistant dean of student life for public service.

That event sought to address some of the unique challenges students seeking employment in the public sector face. According to Lovett, the recruiting process facilitated by financial services and consulting firms is hard for more financially sensitive nonprofits and government agencies to match, since many cannot anticipate their needs months in advance or take the risk of hiring a significant number of graduates with no predetermined role or responsibility.

According to Mount, OCS tries to help out such employers by using money obtained from for-profits to waive job posting and career fair fees for non-profits.

Further complicating job search in the public sector, Mount said, is the fact that many roles only open up after a departure at an organization and that nonprofits generally cannot afford to train students, meaning that the few positions they offer are unlikely to be entry-level ones that recent graduates can take. Mount said students heading into public service often have to wait some time to find a good match.

“When you’re looking for a job in the public interest sector, it’s not going to happen in the fall semester—it might not even happen halfway through the spring semester,” added Phillips Brooks House service to society fellow Robert C. Julien, who works on publicizing service opportunities at Harvard.

According to Lovett, 21 percent of Harvard College seniors go into a public service job, putting Harvard right in the middle of what he said was probably a 15 to 25 percent average across the Ivy League and other peer institutions.

But even before students grapple with an uncertain postgraduate job market, they face a similarly under-resourced process for finding and securing internships in the public service sector.

Last summer, according to Corbin, the College was only able to place 44 percent of the 888 students who applied for a summer internship through organizations such as the Phillips Brooks House Association, CPIC, and the Institute of Politics each year. 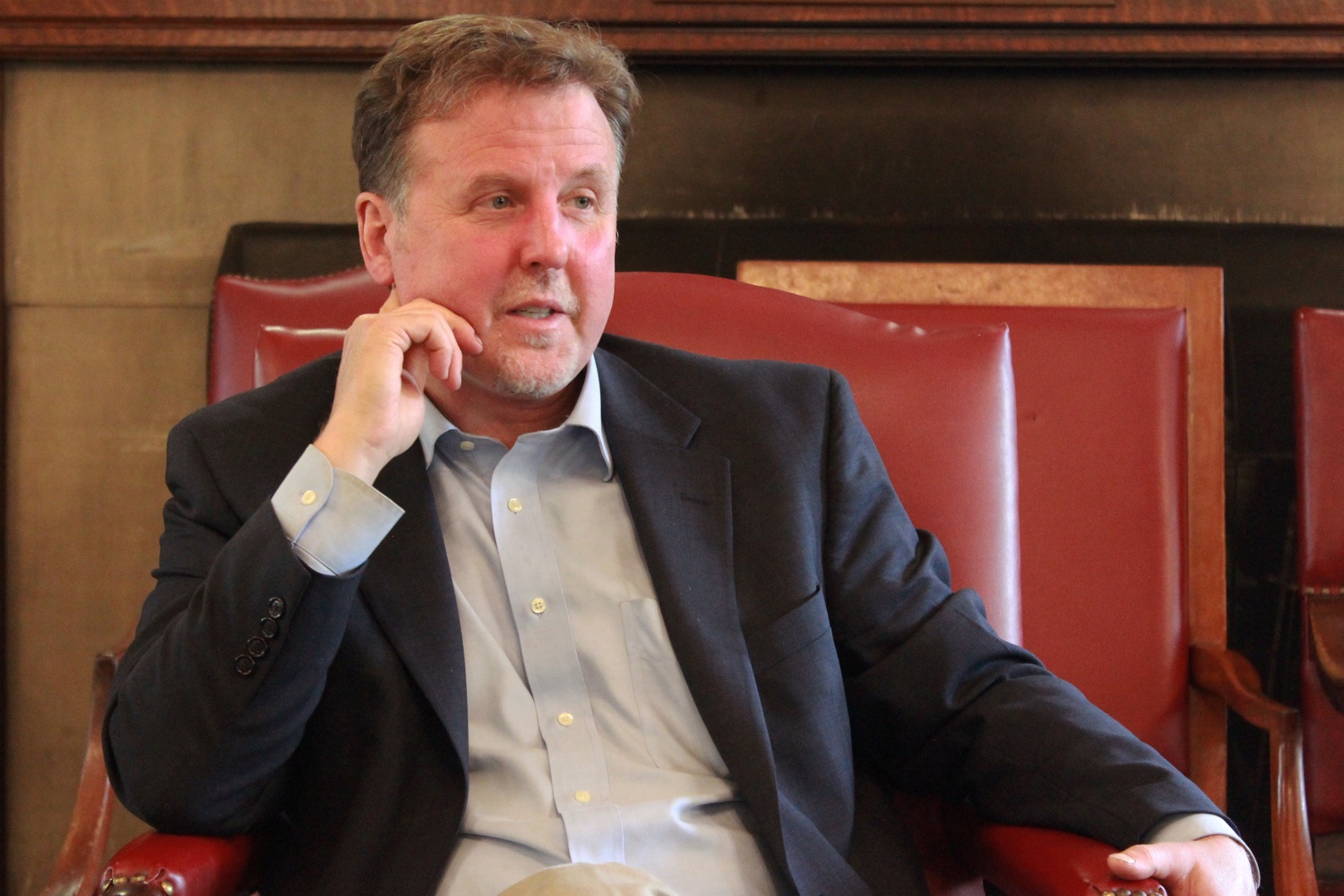 Gene A. Corbin is the College's assistant dean of student life for public service. By Savannah I. Whaley

“We’re turning away a lot of students who care about service and want access to these programs,” Lovett said, adding that the inability to match student demand for service internships is largely a financial issue. “That’s a fairly alarming trend—I don’t think it’s a matter of lack of support from administration...it’s just that it’s going to take a really significant [financial] contribution to be able to expand opportunities.”

Corbin said one of his office’s priorities in the ongoing capital campaign is to expand participation in the College’s public service opportunities, creating a central “pot of money” to enable every student to do a summer of service if desired.

But even after students obtain coveted public service internships, they can still face financial challenges, which for some can extend beyond summertime employment and stand in the way of term-time participation in public service.

Kevin E. O’Donnell ’16, who interned in New York City last summer as an IOP Director’s intern, said high housing costs made him pick up frequent side jobs like cat-sitting to break even, and that still left him with only $60 a week to budget for food.

“If there is someone who is in a more tight spot with financial aid, I would say that more [money] would definitely be necessary—because you’re definitely not earning any money,” O’Donnell said.

Lovett, who joined CPIC in 2006, said the Director’s Internship $4,000 stipend for domestic internships has not been updated for “as long as [he] can remember,” and noted that other stipends Harvard grants to students for summer work have also not been updated in several years.

And several summer internships have not even reached the $4,000 mark—some internships offered by CPIC, for instance, offer stipends from $1,000 to $3,000. Corbin said one of his office’s capital campaign goals is providing $4,000 stipends across all service internships that the College offers, in addition to waiving the summer earnings contribution of any financial aid recipients.

Even if that is achieved, however, an economic disincentive for service could still remain for many students when they return to Harvard’s campus after each summer.

“Oftentimes for first-generation students, financial reasons can serve a barrier to pursuing extracurriculars, and even post-grad work, because that pressure to make money is always there,” said Jasmine A. Fernandez ’16, the president of the Harvard College First Generation Student Union. 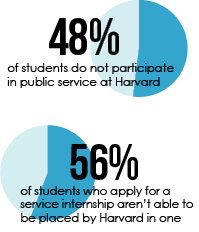 By Nathan A. Cummings
Advertisement

The STRIDE Undergraduate Scholarship Program at PBHA, which provides some low-income students with a stipend for year-round service work, would seem to be the College’s antidote to that problem. Yet the Stride Rite Foundation that funded the program no longer exists, so the program itself now depends on insecure, temporary funding from PBHA itself, according to PBHA Executive Director Maria Dominguez Gray.

Once a first-generation college student himself, Lovett said addressing the financial obstacles to public service is at the top of his priority list.

“One of our biggest concerns [is how to] support the student who doesn’t have the financial means, or if they have the financial pressure, that they have to earn X amount of money to either pay for tuition, so we’ve been looking at summer earnings contributions, trying to figure out if there are ways we can waive that,” Lovett said. “Unfortunately, that’s extremely expensive...but we would love to be able to send the message that more students would be able to go into service.”

While financial difficulties might drive away some students from public service activities, administrators and student volunteers say that still others might not participate in programs like PBHA because of other commitments and a culture of pursuing lucrative financial and consulting careers. As a result, the College’s public service community is often centered in pockets that may be isolated from the rest of the student body.

“Historically, public service has been on the margins of campus culture,” Corbin said. “It's been the committed students, instead of across the board.”

“A person might be willing to give two hours, but not if that two hours is in addition to a 45-minute commute to Roxbury and coming back,” Ghosh said. “Getting the time commitment for a high quality volunteer experience that is serving the community as well as helping your own learning…is hard.”

Former PBHA resource development co-chair Ivy Z. Yan ’15 expressed concern regarding the fact that nearly half of the student body does not do public service, and said she was disappointed with the tendency of some students to engage sporadically with the service community.

“That’s an incredible body of people who we would like to get involved with service, because there are actually a lot of volunteer shortages in a lot of programs [at PBHA],” Yan said. “[But] this kind of lowest possible involvement to do service is unfortunate in my eyes because it’s not focused on the community, it’s not very intentional. It’s…get in, get out.”

Yan also said that there was certainly truth in Harvard’s reputation for “churning out” students who go into finance and consulting, characterizing it as the “path of least resistance.”

“I don’t think it’s Harvard saying, ‘You guys should all do Bain,’” former PBHA programming co-chair Vivian C. Shaw ’15 said. “I think they say that in the way their resources [are allocated].” Shaw pointed to funding for the On-Campus Interview Program and CPIC as an example of such resource allocation.

Harvard’s campus culture problem, Shaw argued, is also characteristic of a larger nationwide culture problem, and is a manifestation of what she said was Harvard and OCS’s desire to have students to succeed within an “existing structure.”

Still, Mount characterized OCS’s philosophy as a neutral one that wants to support students regardless of their career choice.

“Students are not considering careers at the moment,” she said. “They’re just choosing their first work experience and their first next steps—it’s kind of a journey that you guys are on.”