Gaming as Sport: eSports on the Rise 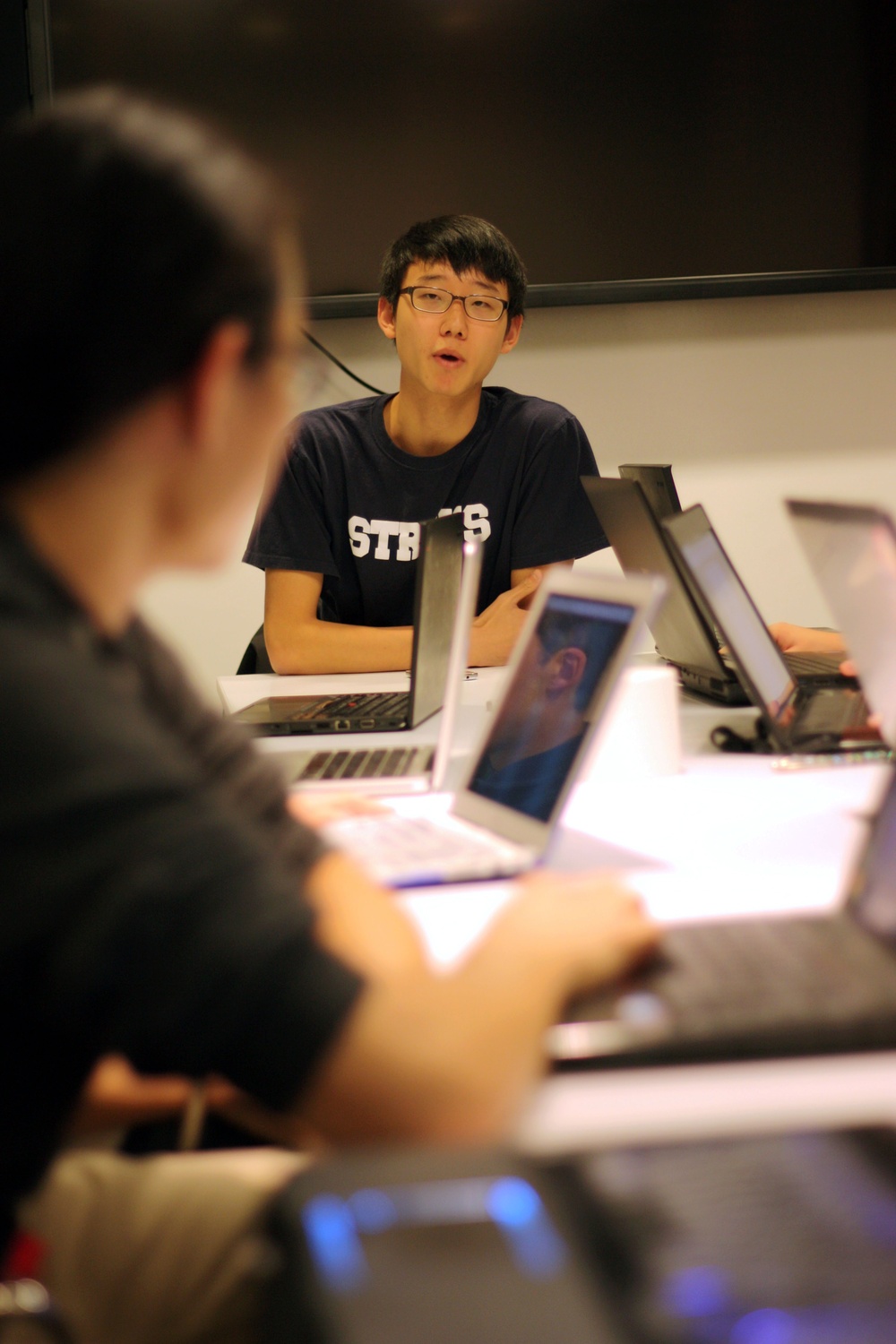 Andy Kim '17, pictured above in fall 2014 at a board meeting, is the co-president of the Harvard College eSports Association. By Connie Yan
By Justin C. Wong, Crimson Staff Writer

When asked to identify Harvard athletes, you might think of the football team taking the field at Harvard Stadium for The Game, the men’s basketball squad suiting up at Lavietes Pavilion, or the heavyweight crew team racing down the Charles River.

A crowd of 50 people gathering in Pierce Hall 301 to play competitive video games might not be the first group that comes to mind.

Despite still being viewed as a niche activity in mainstream culture, eSports—or competitive video game competitions—are on the rise, both across the country and at Harvard.

Over the past year, eSports have gained publicity on a national scale. In August 2014, Amazon paid nearly $1 billion to acquire the video service Twitch, a website that enables viewers to watch professionals play video games in these sorts of competitions. Although ESPN president John Skipper dismissed eSports as being incomparable to “real sports,” more people watched the 2013 League of Legends World Championship (32.0 million) than did the BCS Championship (26.4) or Game 7 of the NBA Finals (26.3).

Competitive gaming is also gaining traction on college campuses. A much-discussed New York Times article published in December 2014 pointed out that some universities have begun to give athletic scholarships to students who compete in games like League of Legends and StarCraft II.

While Harvard is not quite ready to expand its list of 42 varsity sports to include video games, the gaming community is on the rise in Cambridge.

When sophomore Andy Kim arrived on campus for his freshman year, he sought out a forum to compete in League of Legends but was surprised by the lack of a formal gaming community at Harvard.

“I assumed that since video games are so big, there would have to be a club,” Kim said. “All of my friends from home go to [University of California] schools, and a lot of people play eSports. Even BU had a gaming club. But there was no such thing at Harvard, and I was shocked. The closest thing was board games.”

Kim described the Harvard gaming community as being very splintered initially, with no unified structure. Eventually, Kim posted a message in the Harvard Class of 2017 Facebook group asking if anyone wanted to watch the League of Legends World Championships.

Kim received a response from Jason Shen, a classmate, and the two became friends. Eventually, they began to discuss ideas for making a club for League of Legends.

But the discussion did not stop there. In the fall of 2014, Kim and Shen founded the Harvard eSports Association, and they now serve as its co-presidents. The club aims to connect the disparate gaming communities on campus and has game directors for the Dota 2, Hearthstone, Heroes of the Storm, League of Legends, StarCraft II, and Super Smash Bros. titles.

“Ever since the club was created, it has given gamers a space and a community,” Kim said. “The fact that we have an officially recognized club speaks volumes.”

“One of the tenets that Jason and I wanted for our club was to help with the destigmatization of gaming,” Kim said. “At Harvard, people are hard-working and are judged if they’re seen as wasting time on something not important. But just because you’re playing games doesn’t mean you’re wasting time.”

Now, the club hosts monthly LAN parties in Pierce Hall, where anywhere from 30 to 80 Harvard gamers come to play various games for several hours. The group also competes in intercollegiate tournaments. Pietra competes in Smash tournaments both on campus and larger city-wide competitions.

“Normally, the weekly tournaments in Boston are at bars,” he said. “There could be as many as 50 people at the tournament. I don’t go super often, but a lot of people there all know each other and are very much a family.”

Even with the continued rise of competitive gaming—both on college campuses and nationwide—there remains a debate over what qualifies as an eSport and whether eSports will ever gain legitimacy on the scale of traditional sports.

The debate begins with the term itself, and whether it is an accurate descriptor of competitive gaming.

“I like the term eSports in describing competitive gaming because it makes it easy to understand for someone who doesn’t know what it is,” Kim said. “It’s the electronic version of sports. But it also limits the identity of eSports to be an inferior version of sports. There are similarities, but it doesn't have to be considered a sport for it to be considered legitimate.”

For some gamers, the debate over whether competitive gaming qualifies as a sport is relatively unimportant.

“It depends if you consider chess a sport,” Pietra said. “[Super Smash Bros.] is very much a mental game, outthinking your opponent, and it’s competitive. I don’t know if that makes it a sport, and I don’t really care. eSports is a term to categorize gaming. It doesn’t need to be made into an athletic feat because that doesn’t make sense.”

But Kim sees many similarities between eSports and traditional sports, even beyond the aspects of teamwork, competitive mentality, and muscle memory.

“There is a stark difference between professional and amateur gamers,” Kim said. “That’s what sets League of Legends apart as a sport rather than a game. In a game like foosball, there’s some degree of similarity in that a set of skills are involved, but you don’t see the same distinction between the levels of players.”

Kim further noted that eSports are physically demanding in ways that differ from traditional sports.

“Obviously, I’m not running around,” he said. “But at the same time, there’s a lot more subtlety in video games. In basketball, if your dribble is a little off, it doesn’t matter. But in eSports, success or failure can be decided by subtle, millisecond differences in how you move your character, or attack. You need to be very good mechanically.”

Additional hurdles remain before eSports can achieve widespread acceptance, with the stigma surrounding gaming and the gender imbalance of gaming participants both concerns.

But with the ever-rising popularity of video games and increasing media coverage, eSports are certainly on the rise, regardless of the lingering issues. And at Harvard, the eSports Association is looking to gain more traction on campus after a successful first year.

“Once you open up this club, you find there’s a lot more gamers than you thought,” Kim said. “The LAN parties are habitual at this point, but we’re working on solidifying an intramural system and making our competitive team tryout system more formal. We want to host large tournaments at Harvard that show people that we’re fun and welcoming.”

Kim believes that the growth of eSports on a national scale will be primarily driven through professional showcases.

“There’s professional basketball on TV, and people watch it,” he said. “That makes it normal, and cool. Once professional League of Legends is televised, it will become more mainstream.”

“eSports are pretty neat to follow,” he said. “Just like any other sport, it’s a competition you can watch and bond over with your friends. Is there really that much of a difference between consuming beer and chicken wings whether you’re watching football or a League competition? I wouldn’t say so.”

—Staff writer Justin C. Wong can be reached at justin.wong@thecrimson.com.