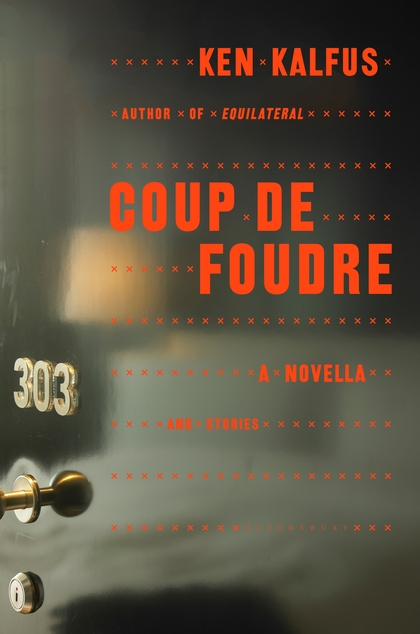 With “Coup de Foudre,” Ken Kalfus returns to short fiction, the form that launched his career. The collection offers a bountiful sampling of the peculiar. Kalfus seems to revel in the consequences of dropping small bits of strangeness into an otherwise recognizable world—a park bench that traps its occupant until someone else comes to take their place, a curse that makes every inhabitant of a single town aware of the date on which they will die. When he’s not playing with these fanciful tidbits, he takes mundane occurrences and twists them until they feel unfamiliar—a young professor working on commission to project future social trends begins to lose his sense of linear time; a judge becomes paralyzed by a routine legal decision when he begins to contemplate the “many worlds” interpretation of quantum physics. Kalfus captures all this with dry wit and polished style, gliding from piece to piece and skewering everyone from the powerful to the powerless.

By Courtesy of Bloomsbury

The gem of the collection is the title novella, which reimagines the fall of Dominique Strauss-Kahn through an unsent and unsendable letter from “David Lèon Landau” to Mariama, a hotel maid he assaulted. The letter, ostensibly an attempt at penance, soon lapses into self-obsession, meticulously accounting for every moment of sexual desire and professional paranoia experienced by Landau in the days leading up to the assault. Kalfus skilfully conjures Landau's obsessive psyche. He is extravagantly, self-consciously predatory, tossing out comments like “I was casting my line, mostly out of restlessness, knowing that I would be seeing Claudette soon enough, yet also keen to know what else was within range of my barbed hook.”

Here, Kalfus's talent as a writer becomes clear through his brilliant creation of a narrator who most certainly isn't a polished writer. Landau's letter reads like melodrama, dripping with exaggerated character descriptions and exorbitant accounts of luxury, all wrapped in the pompous tone of a man assured of his own importance. At times it feels like a more competent rewrite of “Fifty Shades of Grey”—“For a moment, before I fell on top of her, Claudette lay on the carpet stunned”—which is exactly how one might imagine a sex-crazed financial powerhouse would tell his story. The explanations that Landau provides for his behavior expose his conflation of wealth and sex, of the European financial crisis and his own personal undoing. “I had been locked in this tunnel—less metaphorically, a highly excitable and distracted state of mind—for the past several days, my thoughts careening against the passageway’s frictionless walls from one data point related to international finance to the next. Also, from woman to woman,” he writes, and goes on to brag about the effects of his AmEx Black Card, “an advertisement for sexual prowess if there ever was one.”

The rest of the stories vary widely in quality. Most are only a few pages long, and some feel more like notes or exercises—perhaps better used as parts of a longer work than as standalone pieces. Although Kalfus's technical mastery is evident throughout the collection, his writing often produces beautiful but ultimately unsatisfying vignettes. [Kalfus][HE] seems to have a particular penchant for stories that reveal nothing, charting eventless moments or obscuring the central events of their plot. “Factitious Airs,” for instance, captures a man's nitrous-influenced thoughts during a routine periodontal cleaning. He hallucinates a second dental hygienist, feels connected to a higher level of reality, and then comes back to the ordinary world, which he concludes is “no more comprehensible than it ever was.” In “Mercury,” a man recounts the story of losing his job after writing a scandalous note, without ever revealing the content of the note for which he was fired, and in “Professor Arecibo,” a professor sits in a bar listening to a phone conversation about himself without giving any details of the “slightly complicated and unfortunate situation” being discussed. Individually, these stories are skillfully executed and intriguing, but when strung together, their common lack of substance become frustrating. Kalfus puts on a beautiful display, but it sometimes feels like he’s using mystery to compensate for a lack of creative plot twists.

Many of his premises are clever, yet Kalfus's writing betrays that he is overly aware of this cleverness. “City of Spies” sets up an elaborate chain of informants monitoring one anothers’ loyalties—a network of relationships that strains the memory—until it becomes clear that these actors will not engage in any further drama, that the purpose of their espionage is irrelevant; the story's sole point is the establishment of this convoluted chain. “Teach Yourself Tsilanti: Preface” also falls into the trap of excessive cleverness—it is ostensibly the preface of a book that recreates a language that never existed, a language that the writer hopes will cause a fetching cafe barista to realize that she loves him. The story dryly highlights the absurdity of fetishizing languages that are supposed to be more “expressive” than one's own—not to mention the absurdity of idolizing unknowing baristas. Yet the writer's voice becomes overly grating, filled with grandiloquent comments like “This is all any of us can hope for within the span of our brief earthly tenures.”

However, the longer, more substantive stories redeem the collection. “Shvartzer” reveals a horrifying underside to an old man's apparent dementia, while “Laser” documents an enthusiastic teacher's fear and frustration as he loses his vision to glaucoma despite a promising preventive surgery. Kalfus’s exploration of these characters and their relationships is nuanced, and he expertly places familiar events in a startling new light. Such pieces provide the meaning and satisfaction absent in stories where he is merely showing off his linguistic dexterity. In “Coup de Foudre,” Kalfus is at his best when he isn't trying too hard to be innovative, when he embraces the oddities that give his stories their spark without forgetting the need for character development and a sense of closure.

—Staff Writer Miriam M. Barnum can be reached at miriam.barnum@thecrimson.com.