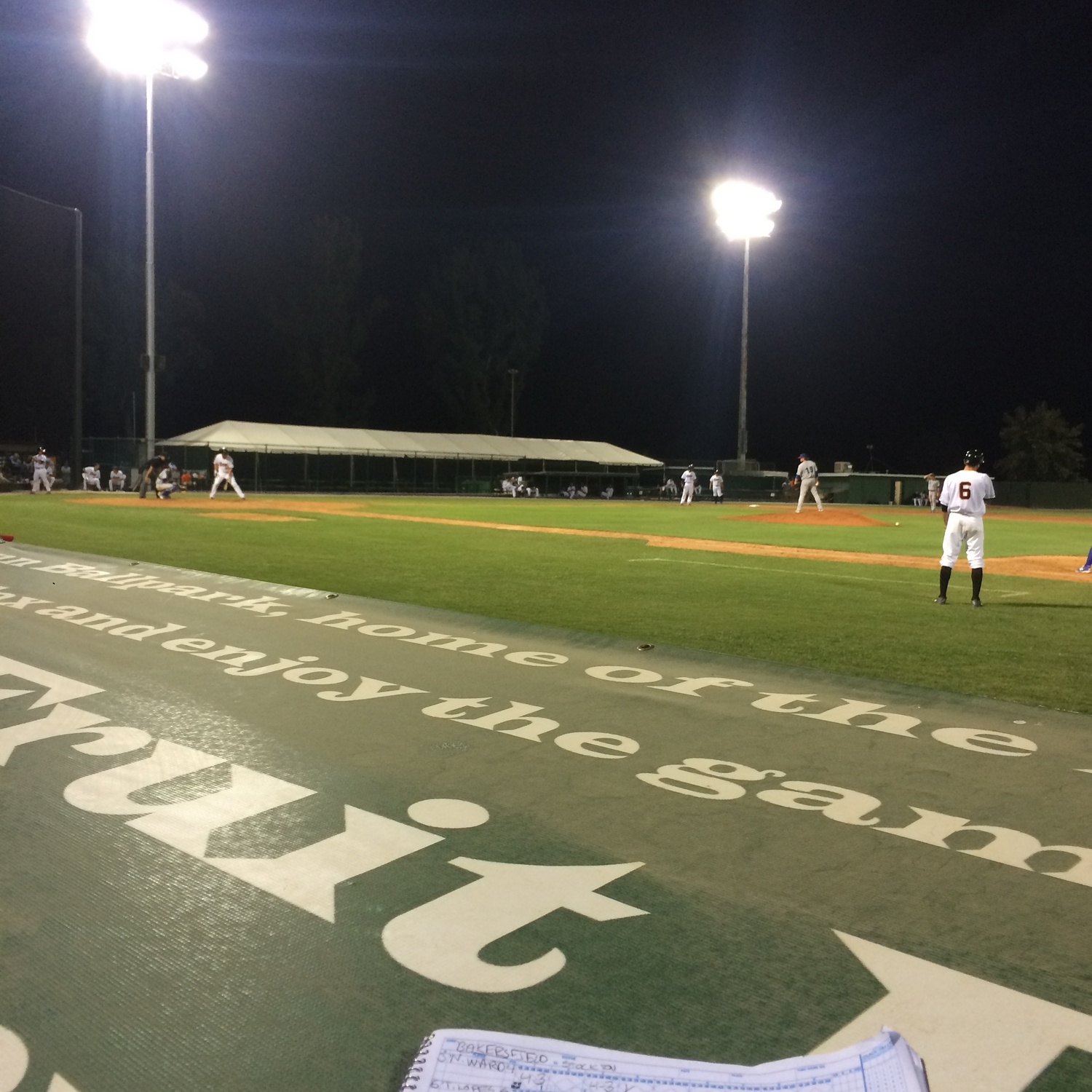 BAKERSFIELD, Calif.—On a dryly hot Sunday evening this month, my childlike love of live baseball leads me here, to an outpost in the California desert not quite like any place I’ve seen before.

Sam Lynn Ballpark is the home of the Bakersfield Blaze and the site of my fourth baseball game of July 4th weekend. It’s the first Independence Day I’ve spent away from home, and after an oddly difficult bout of homesickness on Thursday, baseball is how I’m coping. My first three games of the weekend were at Dodger Stadium, where I saw my beloved Mets take two of three from the hometown Dodgers. Tonight, after two frightening hours in my rented “Smart Car,” (quotes because I feel like I made a dumb choice) I’m more than 100 miles away from my temporary bedroom in somebody else’s condo on the West Side of L.A.

The Blaze are the Class A affiliate of the Seattle Mariners, but judged on raw appearance Sam Lynn doesn’t come close to living up to what you would expect from a professional team. For starters, parking is free, a first in my experience attending professional games. More noticeable are the park’s dimensions—at 354 feet to dead center, it’s the shallowest field in professional baseball—and that, of the 40 or so people in attendance tonight (the park is said to hold 3,500, but I’m told that number isn’t hit often), about half appear to be team employees. Another Class A game I attend the next week at a different stadium has about as many people waiting in line for tickets five minutes before the game.

I sit behind home plate ($11) with six diehard Blaze fans. Each takes his or her turn reeling off the names of Major League players who have come through the friendly confines of Sam Lynn, and we all join the fun of heckling the poor umpire who stands less than ten feet away from us. But despite the enthusiasm, signs that this place is small time abound: when I ask the gentleman to my left who Bakersfield’s best player is, he answers with a Russian name, and soon I realize he’s talking about a goalie on the local minor league hockey team. In July. At a baseball game. 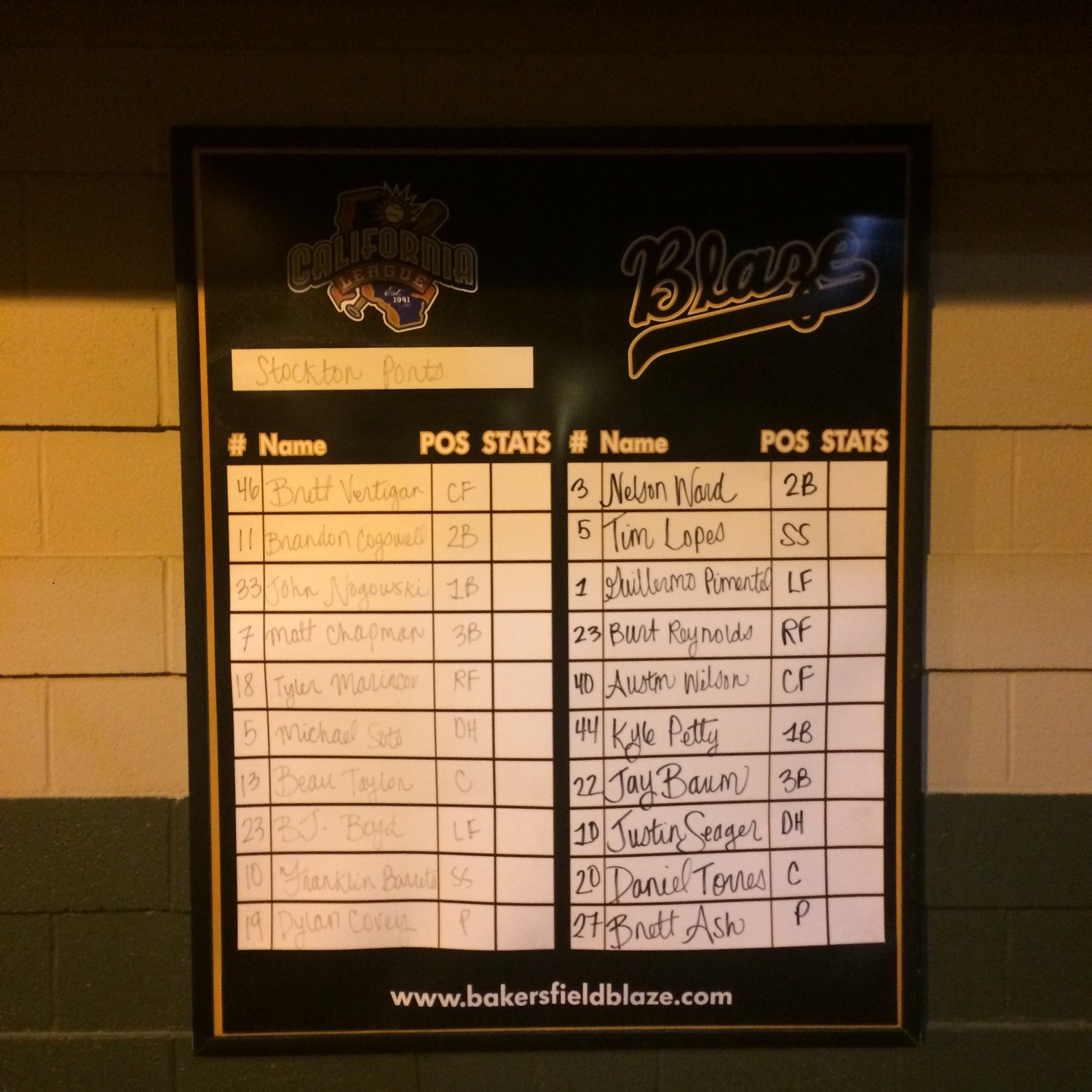 The lineup board at Sam Lynn Ballpark in Bakersfield, Calif. By Matthew Q. Clarida

Nevertheless, the Blaze pour it on early, knocking around Stockton Ports starter Dylan Covey for five runs while holding the Ports to just one courtesy of Brett Ash’s 95 m.p.h. fastball (I’m betting he gets his shot at Double A ball soon). Out of habit I manually score the game, but my attention soon drifts away from the baseball to the players themselves. Everyone on the field was a star in high school or college ball and many were taken in the first 10 rounds of the professional draft, yet the woman next to me says that the Cal Ripken League game next door for players in their early teens probably has a bigger crowd. I can’t tell if she’s joking.

I’ve been to a lot of baseball fields, and I have a weakness for leaning on them when I want to write something emotional and “honest”. While I’m used to the Spartan charm most minor league parks offer, I’ve never seen a place like Sam Lynn, which strips away almost everything that’s sexy about being a professional athlete. The no-frills ballfield accentuates the unique intimacy of the minors and brings the dreams of the players to center stage: Just by being in Bakersfield, they are showing they’ll do just about anything to make it to the big leagues.

If I sound trite, it’s because you don’t drive 200 miles round trip on a whim if you’re not looking for something that’s a little bit cliche. Since I moved to California for the summer, I’ve grown more nervous by the day about my plans for the future. I’ve been stressing mostly about my “career” and what that will look like when I graduate in 10 months, with the usual doses of girl questions and other social things tossed in. I’m not going to lie that it’s been a little more difficult than I thought being 3,000 miles away from home in a new town where I don’t know anybody. It felt good to be in Bakersfield because I was pretty sure a few of the ballplayers felt the same way.

As I keep trying to figure it all out, I’ll be in the scenic ballparks of California. They’re good places for my occasional Instagram, and even better for my predictable, pre-Senior year angst.

Matthew Q. Clarida ’16, one of The Crimson’s associate managing editors, is a government concentrator in Cabot House.