As CS50 Attracts Students, Parodies Pop Up on Campus and Online

In the first CS50 lecture of the semester on Wednesday, instructor David J. Malan '99 explains the concept of binary to students. By Alana M Steinberg
By Melissa C. Rodman, Crimson Staff Writer

As hundreds of students streamed into Sanders Theatre for the highly publicized first lecture of Computer Science 50, Harvard’s introductory computer science course, posters parodying the hype surrounding the popular class popped up around the College’s campus on Wednesday.

The series of posters, hung up in locations including the Quincy House Grille and the entrance to Leverett House’s courtyard, seemed to be a play on materials and merchandise used to promote the actual course. Signed with the tagline, “#notCS50,” the posters feature white typeface on colored backgrounds. One declared, “I did not take CS50,” an apparent reference to real course T-shirts that say “I took CS50.” 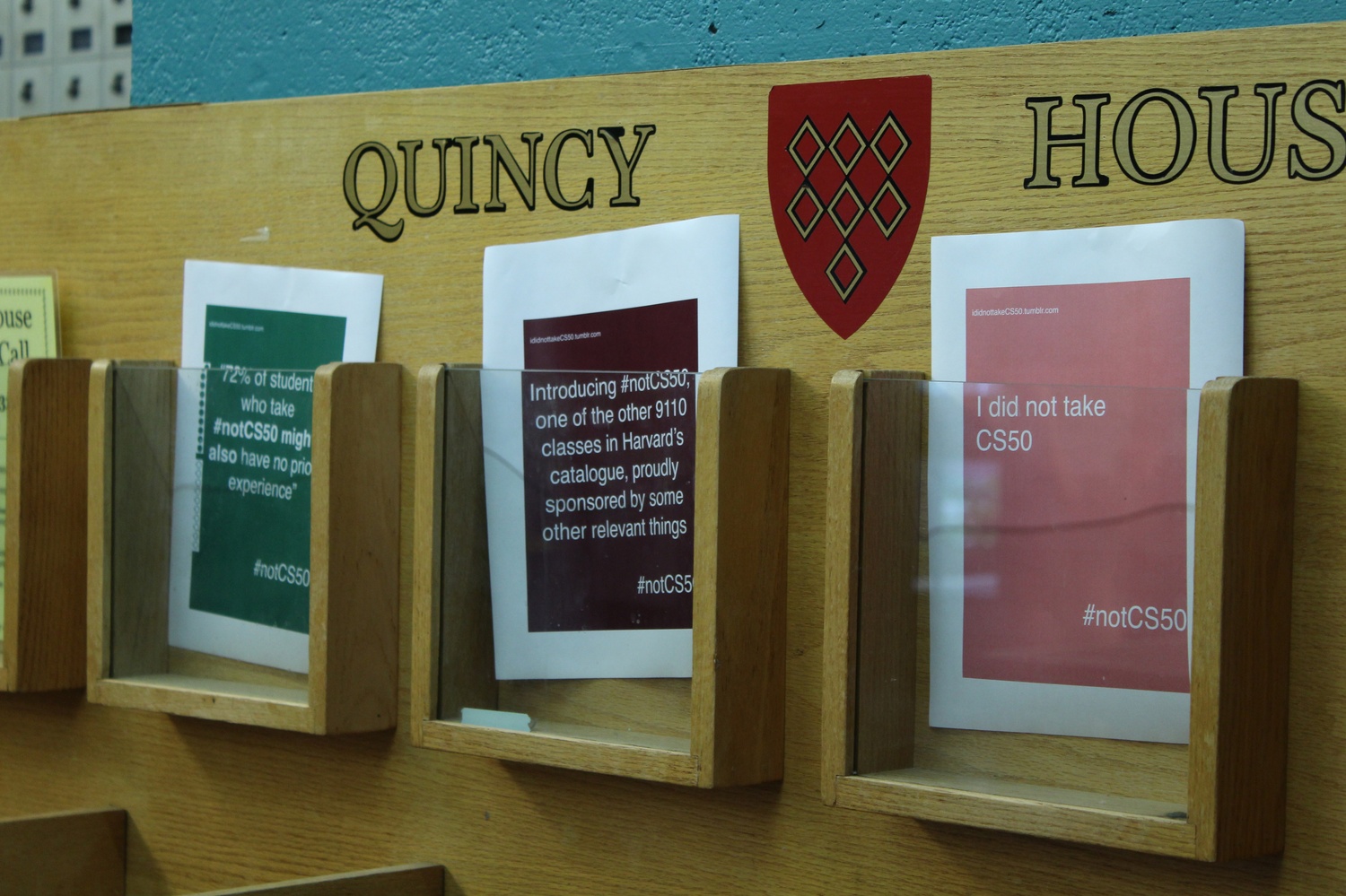 Posters for the #notCS50 campaign cover the publication rack in Quincy House. The posters appeared in houses and class buildings all over campus on Wednesday. By Sidni M. Frederick

In addition, a Facebook profile called “Dave Melon,” seemingly a parody of the name of CS50’s high-profile instructor, computer science professor of the practice David J. Malan ’99, also appeared and “friended” some College students. Its profile picture also has the “#notCS50” tagline.

There also is a “Notcs50” Facebook page; the “Dave Melon” account shared several posts from that page, many criticizing the real course. “Students on Harvard's campus are taking CS50 because of the cult-like pressure around them. We aim to help people truly make a choice for themselves,” one post said.

A Tumblr blog, also titled “#notCS50,” purports that the posters and social media activity are a concerted effort to challenge the popular course, which has attracted hundreds of students in recent years, boasts corporate sponsors, and has managed to keep Widener Library open later in the evenings and circumvent the Administrative Board, which was until recently the College’s primary disciplinary body. It has even spread to Yale.

It was not immediately clear who was behind the posters and social media accounts on Wednesday. But the blog’s mission statement indicated that those behind them hope to highlight what it described as the “unprecedented celebrity and status” surrounding the course.

“#NotCS50 is a movement designed to remind students that just because there is huge university and corporate backing of CS50, an introductory college course like any other, that doesn’t mean they have to take it,” according to the Tumblr.

By Wednesday evening, posts that purported to be testimonials from several students, identified by only their class years and concentrations, had appeared on the tumblr. An anonymous person described as a senior philosophy student, for example, wrote a 36-line poem about being a humanities concentrator who has recognized the “cult” of CS50, according to the post.

Malan, for his part, responded to the parodies in an email, writing that his course is one of many that provide College students with a liberal arts education.

“Quite a few students take CS50 each year, and quite a few do not, and that's certainly what we'd expect on a campus with so many interests and so many courses,” Malan wrote. “[F]or many students, CS50 is a terminal course, whereby it's their only academic exposure to computer science. As such, I do think it (and any number of other gateway courses) is absolutely a candidate part of a liberal arts education.”