Women's Hockey Drops Third Straight With 2-0 Loss to BC 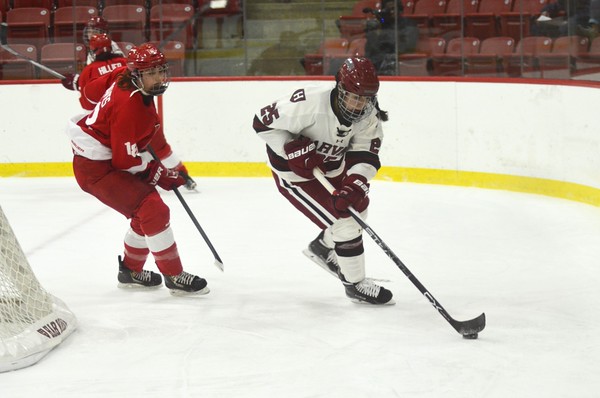 Junior Sydney Daniels, shown in previous action against McGill, had two shots on goal in the team's 2-0 loss to BC.
Photo: Melanie Y. Fu

Hosting the top-ranked team in the country, the Harvard women’s hockey team could not pull off the upset Tuesday night at the Bright-Landry Hockey Center.

This time out on the ice, the Crimson offense could not muster up enough power for the victory. In a physical game in which each team had four penalties, tensions ran high between the benches. Senior forward Miye D’Oench had two whistles called on her, both for checking in the third period. Freshman defenseman Kaitlin Tse and junior defenseman Briana Mastel were both charged with checking as well.

Despite having four penalties called against the team and having to deal with a five-on-three situation in the second period, the home team was able to kill all four power plays.

“Our team came out really hard,” freshman defenseman Kate Hallett said. “When you play a team like BC it’s easy to have a lot of energy. Even though it was a loss overall it proved that we can play with them and can play with anyone on any given day.”

The Crimson’s offense could not find a response to BC’s tally on the scoreboard. The Eagles defense was also relentless, as BC picked up three of the next four penalties of the contest. Despite the time spent on the ice with a one-man advantage, Harvard could not push a puck to the back of BC’s net. The Crimson was able to muscle 29 shots on goal throughout the contest, though Eagle goalie Katie Burt maintained a perfect save record.

“I think for the most part in this game we just tried to get everything to the net,” junior forward Karly Heffernan said. “Maybe we could have held onto the puck a second longer and gotten a better shot off but for the most part we are just trying to get shots to the net and for some reason we’re not getting the proper plays.”

Injuries have forced the Crimson to restructure some of its’ lines, with Heffernan and Kryszczyk skating together on the same line for one of the first times this season. Despite the changes to the available skaters, Harvard has tried to make the best of the situation.

“We’re trying to get whole again,” head coach Katey Stone said. “It’s that next person up mentality. We’ve got kids in many different positions and we have had a lot of flux in our line positions but the kids are handling it as best they can but we haven’t yet been healthy since the beginning of the year.”

Grieves struck again in the second period for BC at the 18:26 mark. She again had help from Sullivan off the left wing of the ice. After that goal hit the back of the net, scoring for both teams went silent for the rest of the night.

This was Harvard’s third straight loss, having dropped its weekend series. The team has now gone five periods without a drive that resulted in a goal.

“In my opinion I think our compete level has been there these past three games,” Heffernan said. “[They had] a couple lucky bounces on their part and executed in their zone, but I think once we get that next goal things will start rolling.”