Back at the Law School, Lessig Reflects on Failed Campaign

Lessig said he sees businessman Donald J. Trump as the candidate with the best chance of enacting the campaign finance reforms he ran on 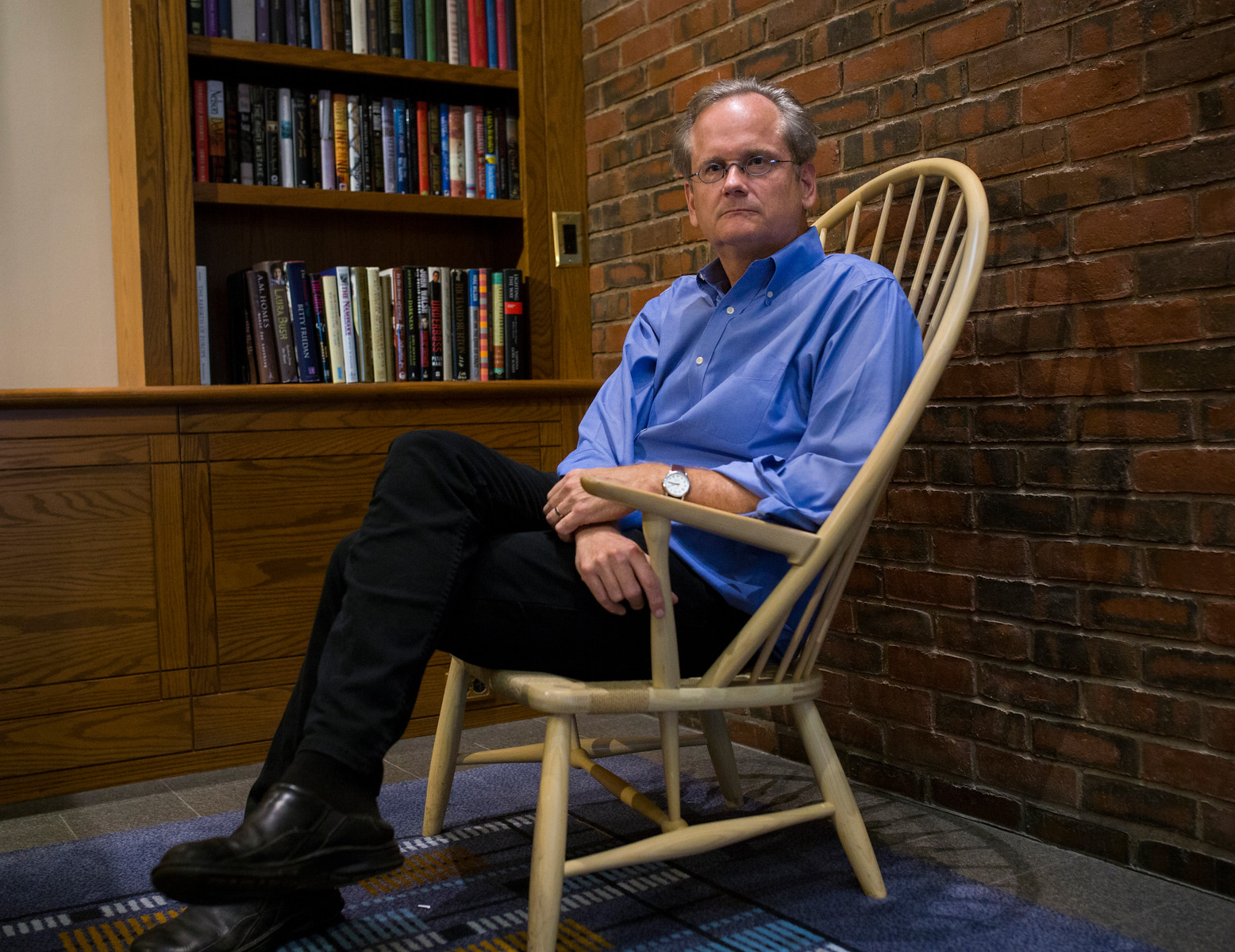 Back on campus after a failed bid for the Democratic presidential nomination, Harvard Law School professor Lawrence Lessig said the campaign was a learning experience in the challenges affecting democracy in America.

In particular, Lessig said restrictive changes to the Democratic National Committee’s debate eligibility requirements excluded him from the stage, limiting the visibility of his electoral reform platform. 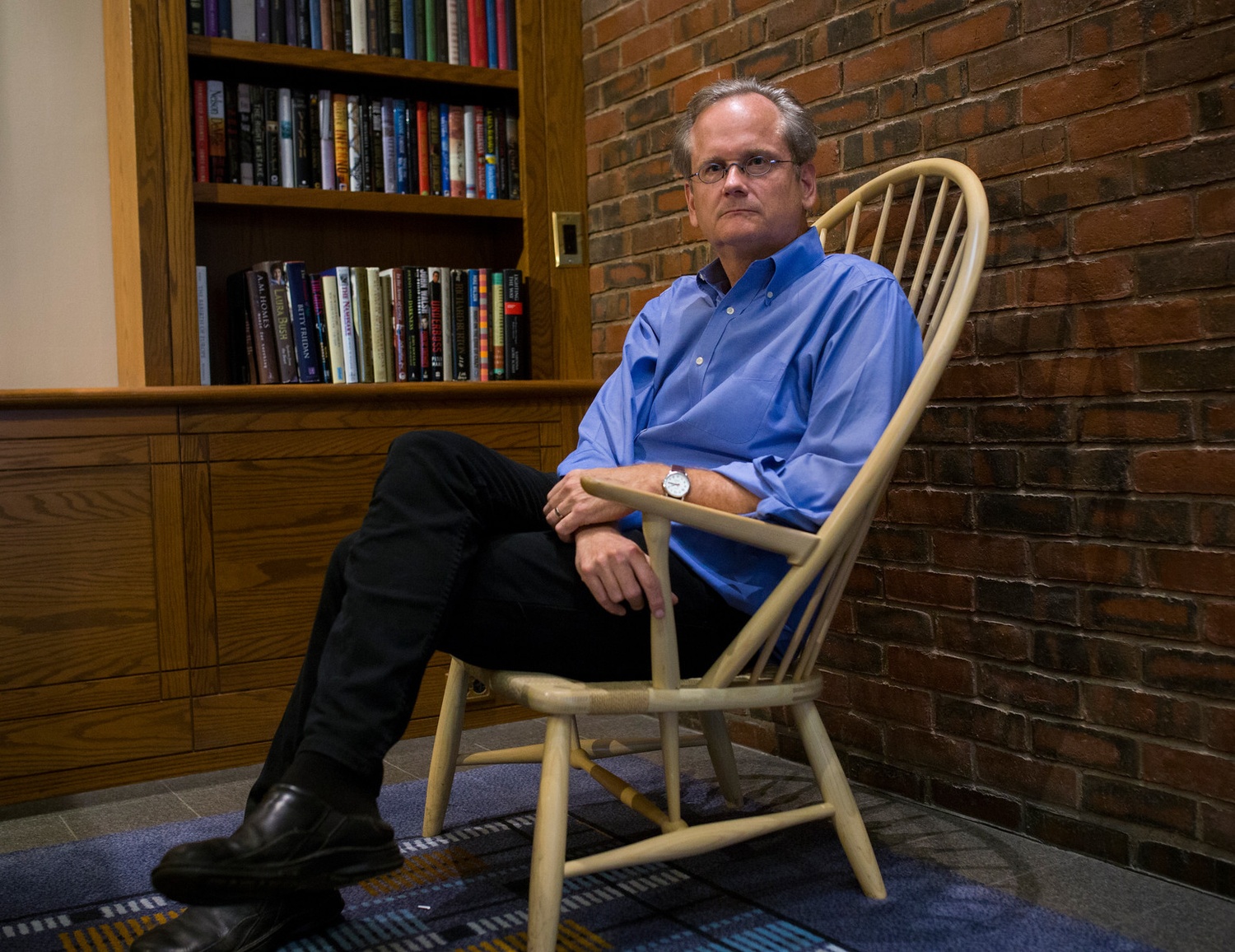 Lessig said he is now looking for the Republican Party to continue his proposed reforms and sees businessman Donald J. Trump as the candidate with the best chance of enacting the campaign finance reforms he ran on, given his strident criticism of Super PACs, political organizations used to funnel tens of millions of dollars into political campaigns.

“I’ve long thought that we will only get reform if a Republican proposes it,” Lessig said.

The center of Lessig’s hope for the Republican Party is none other than Trump, a bombastic billionaire who Lessig said has created an environment where supporting Super PACs is “toxic.” On the issue, Lessig said Trump can “crush” rival Sen. Ted Cruz, who considers political donations free speech.

"As much as it’s impossibly difficult for me to imagine a Donald Trump presidency.... I do kind of think that the highest probability of fundamental reform is if Donald Trump is president,” he said.

Looking beyond national politics, Lessig said his return to the Law School “feels sane.” After his time spent traveling on the campaign trail, he is preparing to teach three classes this term.

Despite the full schedule, he said he will “do as much as he can” to stay involved in the upcoming election cycle but stopped short of endorsing a candidate.

Lessig has had an active and varied academic career prior to his campaign. He is an expert in Eastern European constitutionalism, a prominent voice in the fields of internet security and copyright law, and most recently, an outspoken critic of gerrymandering and the outsized role of money in politics.

He launched his latest project—a bid for the United States presidency—this September after raising $1 million from small donors. He ran an unconventional single-issue platform centering on a proposed legislation titled “The Citizen Equality Act of 2017,” a series of reforms to expand voting rights and limit the role of corporate political contributions. Lessig originally promised to resign after signing the legislation into law.

However, his bid stalled out after the initial round of donations, and he failed to register enough support in polls to qualify for Democratic debates. He officially ended his campaign on Nov. 2.

“To have the appetite to join the political fray as a citizen is laudable, whatever the result,” Harvard Law Professor Jonathan L. Zittrain said of his colleague’s run. “It's to Harvard's credit that he had the freedom to take the leave he needed to do it, and then return to his research and teaching.”

Reflecting on his campaign, Lessig said he regretted his promise to step down after completing his electoral reforms, calling the issue an “albatross” that distracted from the rest of his platform. Despite backtracking on that promise in October, his poll numbers remained low, hovering at or below one percent.

“It was a gamble, but I don’t think it was a mistake to make the gamble because we got damn close,” he said. “I certainly wish that I’d done it differently, but I don’t wish that I hadn’t tried.”

If the Democratic Party had not changed the criteria for its debates this year, Lessig said, he would have been able to present his platform to the nation.

“I think he knew this would be an upstream fight to say the least,” Zittrain said, “but his instinct that this is a ‘change’ year in politics, one where people are hungry for something other than business as usual, has proved true.”

While he said he views Trump as the candidate with the best chance of carrying out fundamental campaign finance reforms, the openly liberal Lessig said he was originally a supporter of Sen. Bernie Sanders before becoming concerned over the credibility of Sanders’ platform.

“You could love everything that Bernie is saying, but unless you change the political system and end this core corruption, nothing that he’s talking about is even credible,” Lessig said.

He said he will continue to weigh in on the election and fight for reforms while juggling a demanding teaching schedule this spring.

“I will do whatever I can, as much as I can,” Lessig said.