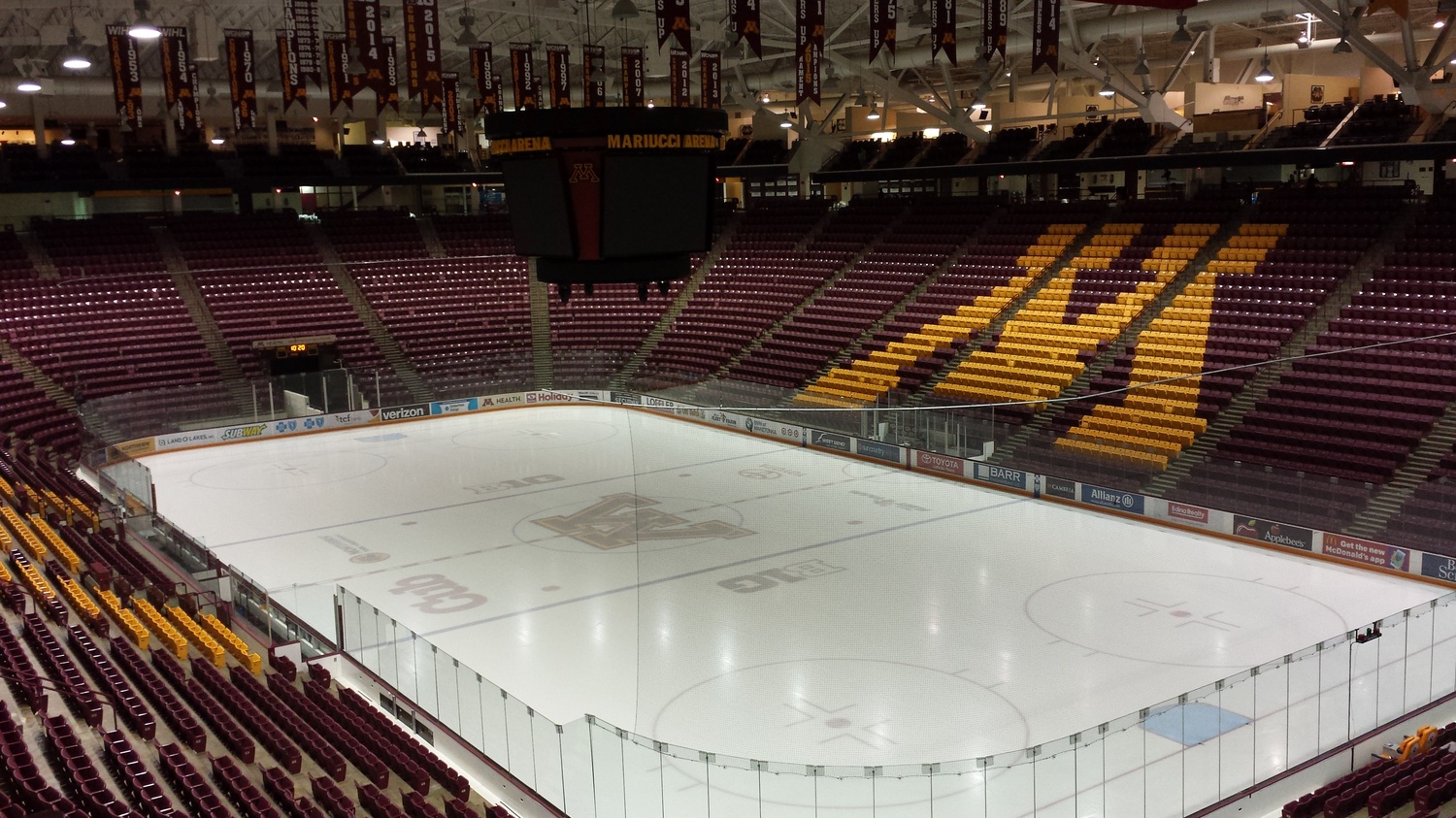 MINNEAPOLIS—Kyle Criscuolo, co-captain of the Harvard men’s hockey team, stands just 5 feet 9 inches tall. But with the 25th annual Mariucci Classic on the line Saturday night, it was the Crimson’s shortest skater who rose the highest.

Clinging onto the 3-2 lead it seized late in the third period, Minnesota—the host of the historic holiday tournament—won the biggest faceoff of the night with less than a minute to go, prompting junior defenseman Jake Bischoff to grab the puck and immediately fire it up the boards.

But using every last inch of his 5’9” frame, Criscuolo left his feet in front of the Gopher bench, elevating just high enough to bring down the puck and maintain the zone with the clock winding down in the championship game.

“The guys on the bench were saying I got up pretty high there,” Criscuolo joked.

Following the co-captain’s high-flying act, Harvard’s six-man attack went to work. Criscuolo navigated his way to the right post, where he stuffed home a feed from senior forward Jimmy Vesey, tying the game with just 34 seconds to go. Then in the overtime period that ensued, the two co-captains reproduced their magic, as Vesey spotted his linemate on a 3-on-2, and Criscuolo beat the goaltender to lift the No. 7/7 Crimson (8-1-3, 4-1-3 ECAC) to a 4-3 triumph and its first Mariucci Classic title in school history.

“Those are the situations you want to be in,” Vesey said. “And that’s what makes us better—playing in games like that, being down like that, having to come back…. The guys definitely stayed up, stayed positive, and basically just found a way to get it done.” 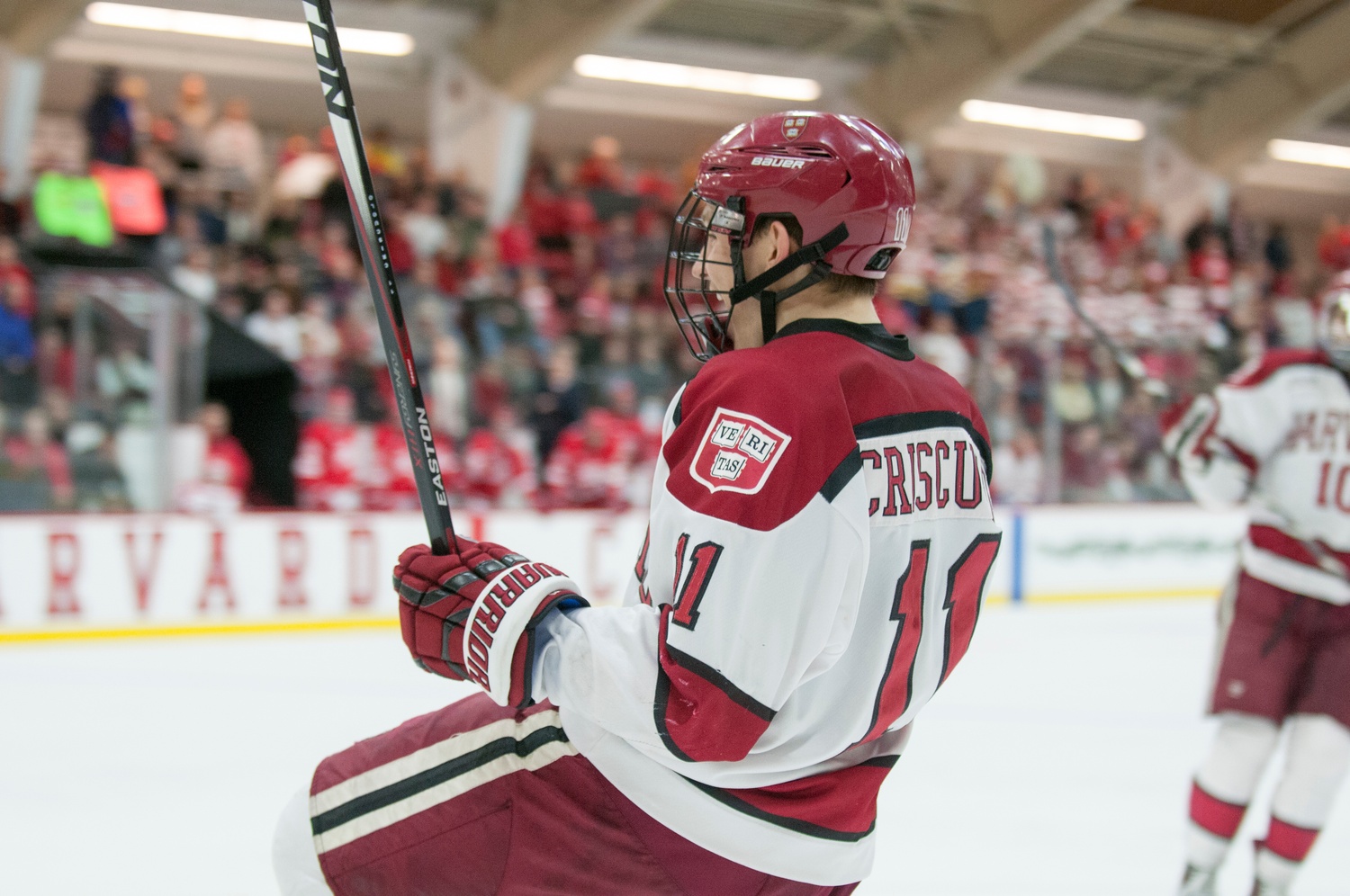 Kyle Criscuolo, shown celebrating during a game on Feb. 14, 2015, won the Mariucci Classic's Most Valuable Player award after scoring the game-tying and game-winning goals in the title game Saturday night. By Mark Kelsey

Not long after having two of his own shots stopped by Minnesota goaltender Eric Schierhorn, Vesey created the space necessary to feed Criscuolo at the end of regulation by inching toward the netminder along the end line.

Vesey’s approach drew junior defenseman Michael Brodzinski, who had been jockeying for position with Criscuolo, away from the far post, allowing Vesey to slide the puck over to the second-year captain. And despite making more contact with Gopher forward Hudson Fasching’s stick than the puck, Criscuolo forced it to trickle through.

Then in overtime, Harvard’s championship-clinching score materialized thanks to yet another play that will not show up on the box score.

Minnesota (8-9-0, 3-1-0 Big 10) tried to open the extra frame as the aggressor, just like it did in the first three periods. And two minutes in, they looked poised to break out on a 4-on-2. But just as the Gophers aimed to get the puck to an open Bischoff, freshman forward Jacob Olson—a Saint Paul, Minn., native—thwarted the opportunity with a poke of his stick, sending the Crimson off to the races in the opposite direction.

“He really made a great play with his Stretch Armstrong reach,” Harvard coach Ted Donato ’91 said. “Then we got the puck in the hands of some pretty talented guys, and they were able to finish it off.”

Junior forward Alex Kerfoot entered the attacking zone along the left wing with Criscuolo on his right, then dropped a pass off for Vesey trailing the play. Rather than shoot, however, Vesey passed the puck over to Criscuolo, who lifted the puck over a sprawling Schierhorn to clinch the title.

“[Jimmy] said he definitely knew that he could beat this goalie,” the tournament's Most Valuable Player recalled. "And I told him, ‘I’ll be right around the net.’"

"I knew he was going to feed it to me, and I knew that the goalie was going to be thinking Jim’s going to shoot—he’s such a lethal shooter," Criscuolo continued. "I was hoping just to get it on net as quick as I could because I knew the goalie wouldn’t be in great position.”

The Crimson led for the near-entirety of the game after junior forward Sean Malone ripped Harvard’s first shot of the night past Schierhorn on the doorstep 2:04 into the contest. But the Crimson would require Criscuolo’s heroics after the hosts exploded for two goals in 28 seconds—one from Leon Bristedt and another from Steve Johnson—to jump ahead late in the third period.

Johnson’s goal, the first of the sophomore defenseman’s career, marked the third unanswered strike for Minnesota, who kicked its comeback into gear with just 19 seconds remaining in the second period when Brodzinski beat Madsen glove-side.

For the first 39 minutes, the sophomore goaltender had completely shut the door on the Gophers, despite Minnesota commanding the Harvard zone for much of the night. Madsen finished with 26 saves—21 over the first two periods—perhaps none bigger than a glove save to rob Tommy Novak on his left post during a Gopher power play in the first period.

But despite Madsen’s efforts, Minnesota finally blew the roof off the building with six minutes to go in the third. First, Fasching launched Bristedt on a break up the left wing, and after cutting to the net, the Swedish product beat Madsen five-hole with a nifty move to his backhand. Then Johnson sent the crowd into a total frenzy, converting from the slot at 14:29.

Yet, two Criscuolo goals later, the Crimson emerged with its first Mariucci Classic championship in four tries and its first victory on the road against the Gophers since 1950.

“This is a big win for us, and a historic one for the program,” Vesey said.

“This was the game we wanted to play in—a full house against Minnesota,” he added. “I think we grew a lot as a team from playing in that game…. I think this bodes really well for us in the long run.”