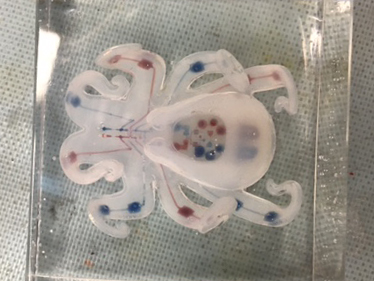 The Octobot is the world's first robot that has no rigid components. By David H. Xiang
Advertisement
Advertisement

The building at 60 Oxford St. is not one that catches the eye. Harvard tourists will never stop there.

But I did, to get a glimpse of the future.

Dr. Michael Wehner, a post-doctoral fellow at the Materials Science and Mechanical Engineering Department in the Wyss Institute and one of the investors of the “octobot,” is waiting for me there. He takes me to a basement laboratory, where he places what looks like a small rubber octopus on the table. There are red and blue lines highlighted inside the octopus. At first glance, one might think it’s a child’s toy.

But it’s no toy. This is the world’s first completely untethered, 100 percent soft robot.

So what does that mean in English?

The octobot is the first robot that has no rigid components—no fuel tank, no mechanized arms, nothing. Those red and blue lines? Tubes through which the robot’s fuel flows. The octobot is powered by hydrogen peroxide, using nothing but simple chemistry.

“The fuel will go through this microfluidic logic module,” Wehner says, pointing to the body of the octobot. “When hydrogen peroxide hits a catalyst” —in this case, platinum—“it decomposes to H20 and 02, so it goes from a small amount of liquid to a large amount of gas.”

Essentially, the pressurized gas flows down either the red or blue lines, but not both. When gas flows in the red tubes, the arms highlighted in red will inflate, and the tentacles highlighted in blue will stay in their original position. Then, when the gas switches to the blue line, the red arms will retract.

It may seem a bit anticlimactic—as Wehner puts it, “I don’t think anyone in the history of the world has wanted a little rubber robot that’s arms moved up and down.”

But Wehner says this is a simple proof of an amazing concept. If Harvard researchers can 3D -print a soft robot for $1.50 in only 18 minutes, soft robotics is definitely going places.

As I view the elegant circuitry of the octobot under a microscope, Wehner tells me about the future of squishy automatons. “This field is moving forward rapidly, surprisingly rapidly,” he says. “I don’t think anything is available on the market yet, but it’s getting surprisingly close.”

As for the future of the octobot, Wehner has some ideas: “Two things we want to work on are more complex gates, so we can move the device forwards [and] backwards, and to add sensors, so if the robot runs into a wall, it knows to turn around.” Wehner says soft robotics may also be used to augment existing rigid robots.

So in 10 years, if you see rubber tentacles serving you a Happy Meal at the McDonald’s drive-thru, don’t be surprised.