The House Where Muses Live

Anyone whose mental catalogue of 90s pop-nostalgia includes Bruce Coville’s “Magic Shop” series will know how it feels to knock on the bolted door of 115 College Ave. in Somerville, Mass.

For those who missed the bestselling young adult books, Coville’s stories always start with a shop: conspicuously eccentric but somehow hidden in plain sight. The protagonist will stumble in by accident and have cryptic banter with the elderly and offbeat shopkeep. When she tries to return, she’ll find the shop gone, without even a sign that it was ever there.

Tucked between an art deco dental clinic and a Jewish community center, 115 College Ave. strikes that same balance between eye-catching and unassuming. It’s hidden, but it shouldn’t be—the house looks like Gaudí remodeled Candyland. Swirling, jewel-tone murals fill every inch of the stucco A-frame. The façade’s only open surface is a giant stone mask, grimacing in the center like a steam-rolled gargoyle. Above the mask, a modest sign reads “Museum of Modern Renaissance.”

It’s a Tuesday afternoon when the museum’s door swings open for me. Nicholas Shaplyko, one of the founders, ushers me into the foyer, a small room as colorful as the exterior. The place has a universal grandma smell—mothballs, soup, comfort—and a constant soundtrack of trickling water.

Shaplyko is the building’s aesthetic opposite: He’s wearing four layers of brown over the dark grey Merrell’s favored by fifth grade boys. His beard and his Russian accent are thick.

“This is a museum. The Museum of Modern Renaissance. We call it museum because, according to the ancient Greek, word museum means house where the muses live,” Shaplyko tells me.

In other words, it’s not a museum—at least not in the conventional sense. The Museum of Modern Renaissance is a private home. Shaplyko lives here with his wife, Ekaterina Sorokina, although they often arrange visits like mine by private appointment. The couple bought the building back in 2002 from the Freemasons—that secret order of founding-father and Dan Brown fame—who had used it as a temple.

The couple transformed the Mason’s private dwelling (no windows and ceilings so low Shaplyko could barely stand straight) into a 3D kaleidoscope—a house densely painted in a style the pair unironically calls “mythical realism.”

The walls of the foyer are tightly decorated with murals of Roman gods. This room, like every other in the house, follows a theme. Shaplyko calls it “Parade of the Planets.”

“When we had [an] exhibition in Moscow, one lady came to us and asked, ‘Why did you choose these particular planets in here?’ And I said, ‘I don’t know. I just feel like it.’ And she made our horoscope and she said, ‘You know, by the way, you were born when all these planets were lined up in one line, the so-called Parade of Planets.’”

Shaplyko grins widely as he tells me this—he loves this stuff. Talking to Shaplyko and Sorokina, it’s obvious they relish that romantic image of the artist as spontaneous creator: the figure whose work is unplanned, uncalculated but somehow destined. Shaplyko shrugs off all questions of inspiration with answers like:

“I don’t know—because we are creators. We are artists, and so we are just creating our world. So this is our world. And we created it.” 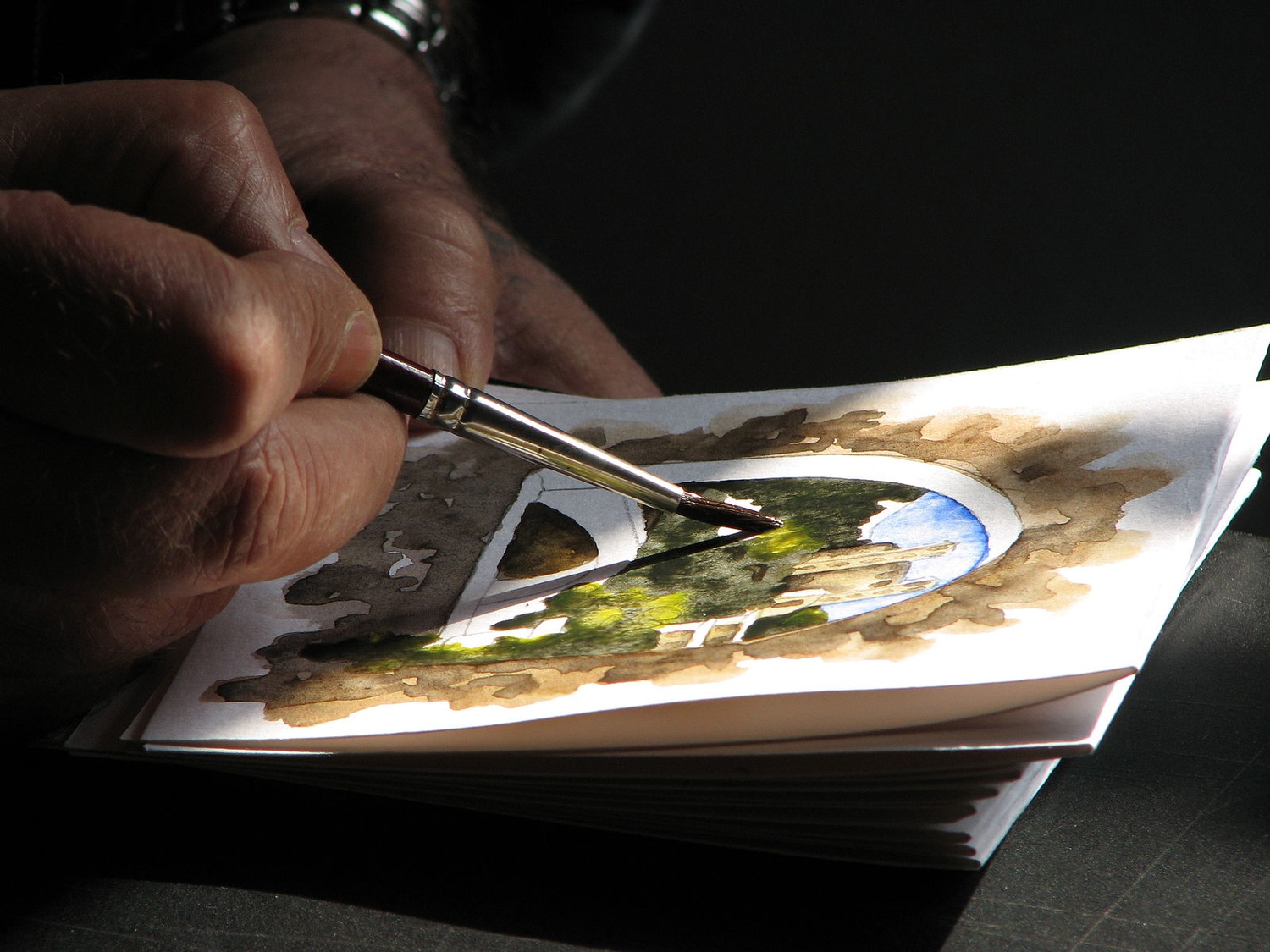 To be fair, 115 College Ave. is no stranger to serendipity. As we walk into the studio—a light-filled space dotted with half-finished paintings and sculptures—Shaplyko tells me that in the museum’s early years, the couple once unbolted the front door to two petite women wrapped in robes.

“It was a knock to the door, and two women just kneeled and kissed the ground and gave us a book,” Shaplyko says.

The book in question was the spiritual best-seller “Autobiography of a Yogi” by guru Paramahansa Yogananda, in which Yogananda details his first class on American soil in 1920.

“It was in this very building,” Sorokina adds as she enters the room. Sorokina is a tiny blonde woman who speaks in thick Slavic syllables. Like Shaplyko, she’s made out in monochrome. Her outfit comprises layers of red form-fitting knits. Yoga, Sorokina explains, made its Western debut in their living room.

Yoga fits easily into the Museum’s governing ethos. “Art is a part of yoga,” Sorokina says, “because with art you are in this process. It’s the same as you make in physical yoga, the asana—it’s mental yoga because you make a connection.” As she speaks, Sorokina carves details into a three-foot sculpture of a veiny wooden phallus.

The Museum’s yogic history is also fueling Sorokina and Shaplyko’s next mission: immortality.

The couple’s idea of eternal life comes in an odd form: National Historical Landmark status. The pair began the application process last March. If their application goes through, Sorokina says they’ll apply to the United States Heritage list and then to the UNESCO World Heritage List.

“That’s our goal. But it takes time, takes effort,” Shaplyko sighs. “But it will be preserved. And we will be proud to be a part of history and culture and civilization. Because we strongly believe that persons should leave a mark after he [has] lived here on the earth.”