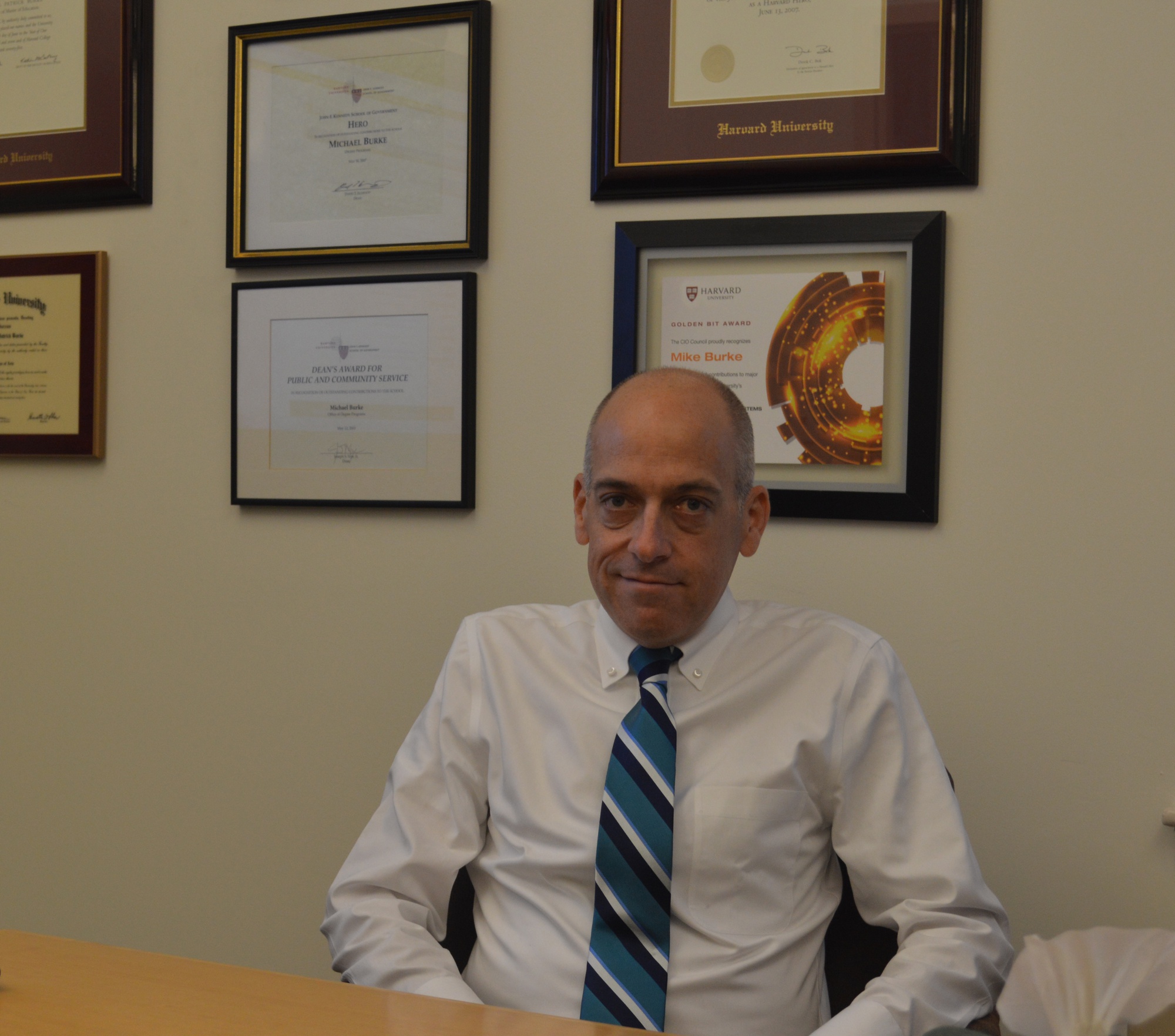 Michael P. Burke is The Registrar: he manages everything from enrollment issues to the course catalog.
By Brittany N. Ellis, Crimson Staff Writer

The Faculty of Arts and Sciences’ Registrar’s Office has dedicated a single person to respond to substantial demand from students requesting to view their admissions files—an increase from a “handful” a month to 100 over the past year and a half, according to FAS Registrar Michael P. Burke.

Students have been able to view their admissions files under the Family Educational Rights and Privacy Act (FERPA) since the law’s enactment in 1974. But a 2015 New York Times article, which reported that a group of Stanford students invoked the law successfully to view their files, put a spotlight on that process and prompted students across the country to begin requesting their materials. Last January, Director of Admissions Marlyn E. McGrath ’70-’73 confirmed Harvard students’ rights to view their admissions records. 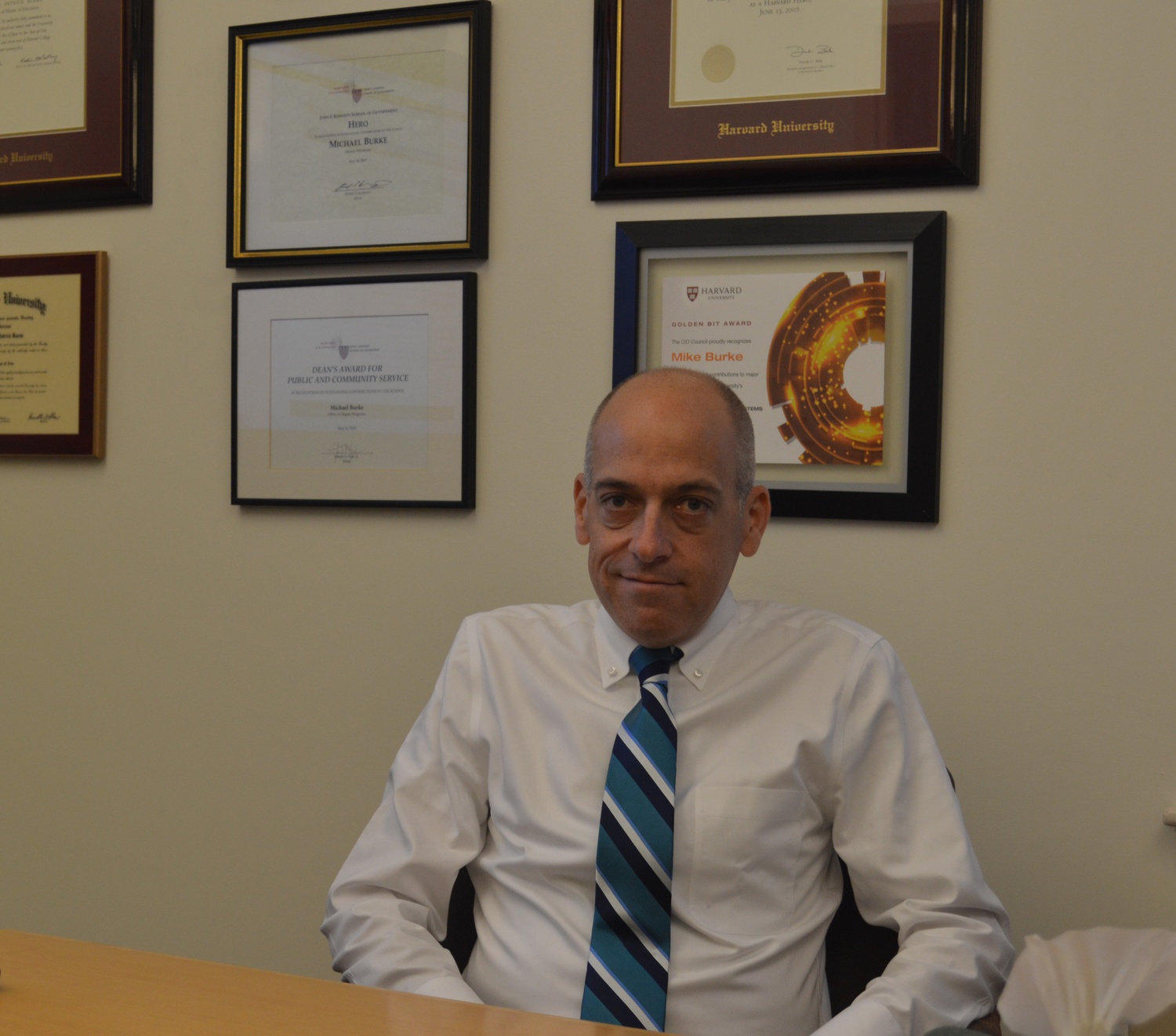 Michael P. Burke is The Registrar: he manages everything from enrollment issues to the course catalog. By Christopher J Magnani

The increase in admissions files requests has resulted in a “significant administrative burden” for the Registrar’s Office, Burke wrote in an email. Burke’s office now has “one person working solely” on responding to these student requests, though he declined to provide the name of this person.

Cora A. Neudeck ’19, who requested to view her file last spring, said she had to wait weeks to see her file because of high demand.

“I think everyone always wonders what did Harvard think was so special about me, since it’s a very small number of people who actually get in,” she said, adding that she wanted to see her files mainly out of curiosity.

The marked increase is challenging for the Registrar because the office has to coordinate between different administrative and academic departments, such as the Admissions Office and the Freshman Dean’s Office, in order to compile all portions of a student’s file. Under FERPA, the University has 45 days to respond to a student request.

The admissions files include all the materials a student submits as part of his or her application, in addition to some summary notes from admissions officers. Students who wish to see their files must schedule an appointment for a proctored-viewing, Burke wrote.

Ritayan Chakraborty ’19, who viewed his file last year, said, “There are no laptops, no photos, you can have your phone, but you can’t take a picture of the admissions folder.”

Burke emphasized that the information in the files consist mainly of the students’ own materials and is not “secret or surprising.”

But students who have viewed their files say that they benefited in reading them even if some of the comments were confusing or out of context.

Ashiley A. Lee ’19, who viewed her file last year as a freshman, said she was confused by a series of numbers included at the top of the summary sheet—which includes demographic information, high school information, test scores, and readers’ notes. She was not aware of the scale admissions counselors use to rank the different parts of a student’s application.

Still, Lee said she found the experience of viewing her file valuable. “I think that it gives you a newfound understanding of yourself because no matter how much you might think you don’t belong, you’re here,” she said.

Other students said the process was helpful for them in their work counseling high school students in the admissions process. Chakraborty said he requested to view his files partly because he was curious but also because he thought it would help him in his work as an admission consulting subcontractor.

“I like to help a lot of students from my high school get into different colleges, and I also college counsel on the side, so there’s the side benefit of understanding the system,” Chakraborty said. “The amount of detail with regards to serious specifics that are included in my application suprised me. I am definitely more wary about that when helping kids apply to colleges.”

Dhruva Bhat ’17 said his experience as helping friends and relatives apply to college motivated him to request his file, but ultimately he found the experience “anticlimactic.”

Still, Bhat said seeing his essays and other application materials again allowed him to reflect on his growth over the course of college.

“At the very least you see how much you’ve changed from the time when you sent in the application, and if there are any notes that’s just an additional perspective you get,” he said.

When asked about the value of seeing one’s admissions file, Dean of Admissions and Financial Aid William R. Fitzsimmons ’67 said, “I’ve never seen mine so it’s hard to say.”

A previous version of this article incorrectly indicated that Dhruva Bhat ’17 worked as a high school admissions consultant. In fact, he has informally helped his friends and relatives apply to college.