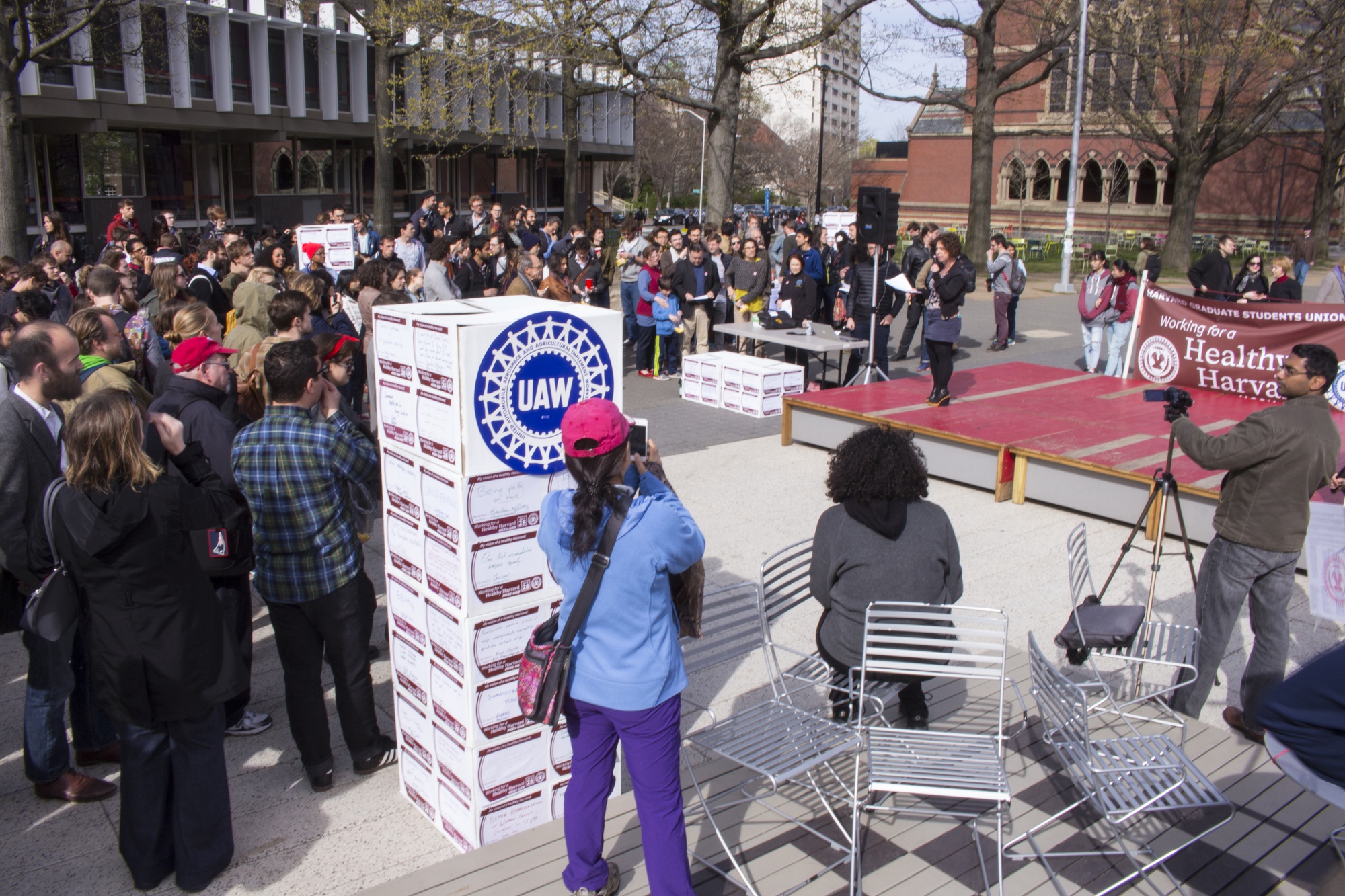 Harvard graduate students moved one step closer to unionizing after reaching an agreement with the University to hold an election on unionization next month, marking the first formal arrangement between the two parties.

The group of graduate students moving to unionize—Harvard Graduate Student Union-United Auto Workers—also filed a petition to the National Labor Relations Board Tuesday to move forward with the process. 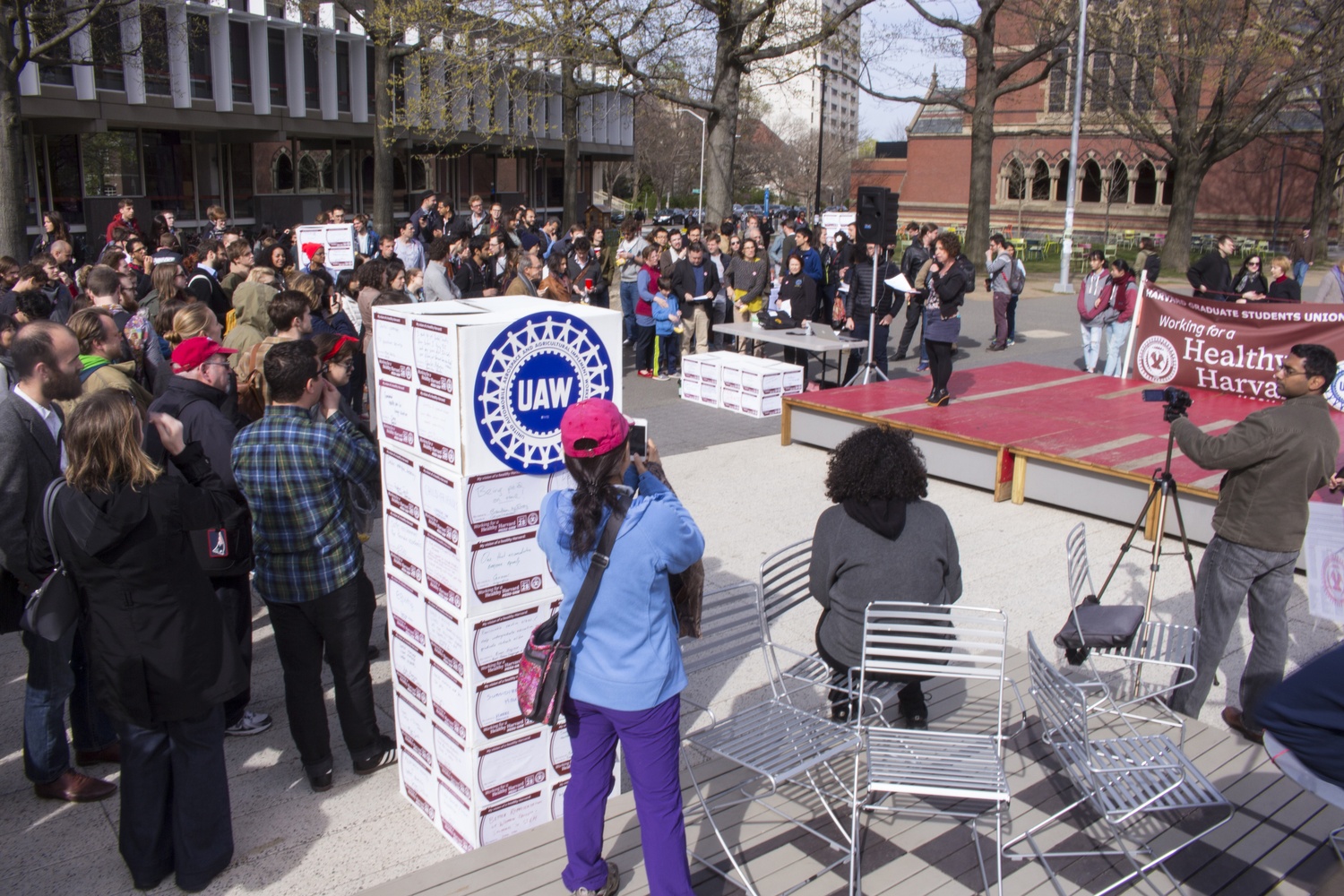 Eligible students will vote in a secret ballot election on whether or not to authorize the HGSU-UAW as their union Nov. 16 and 17, according to an email sent to Harvard affiliates. According to the agreement, only students on the University payroll as of Oct. 15 are eligible to vote.

“The University and HGSU-UAW have signed an election agreement. Subject to approval by the NLRB, the agreement defines who can vote, where and when voting will take place, and other logistical and technical details related to the election,” reads the email, signed by University Provost Alan M. Garber ’76.

In the agreement, signed by the University’s Office of Labor and Employee Relations Director Paul R. Curran and several student union organizers, the University and union effort agreed that a collective bargaining unit would include “graduate and undergraduate Teaching Fellows,” including teaching and course assistants, as well as graduate student research assistants at the University “regardless of funding sources.” However, undergraduate research assistants will not be included in the unit, making the bargaining unit in line with the NLRB’s hallmark decision in August.

At Harvard, the path is now clear to a single election in which all eligible graduate and undergraduate students will be able to cast a ballot. Voting will take place across the University’s campuses—at the Science Center, the Business School, and Tosteson Medical Education Center on the Medical School campus.

Eligible students will vote “yes” or “no” to the question “Do you wish to be represented for purposes of collective bargaining with Harvard University by HARVARD GRADUATE STUDENTS UNION-UAW (HGSU-UAW)?”

“With only four weeks until the anticipated vote, we hope students will move quickly to investigate the issues that matter most to them,”Garber wrote.

During this phase of the unionization process, the NLRB will first certify that the graduate student union effort has enough support to call for an election. As of February, a majority of graduate students employed by the University had signed authorization cards in favor of unionizing—a measure the NLRB will use to determine if the union effort has sufficient support—far more than the 30 percent threshold required by the NLRB for an election.

HGSU-UAW spokesperson Jack M. Nicoludis said the union effort decided to wait until this point rather than immediately file following the August decision—as organizers at Yale did—in order to “make sure that we had the chance to talk to all these other students that were covered by the Columbia decision and new students to Harvard.”

“We wanted to be the most expansive we can be,” Nicoludis said.

After the NLRB decision recognized undergraduate teaching fellows as workers, the union effort began an exploratory effort to inform undergraduates about the movement, and to gauge student interest. Some undergraduates said they were approached in dining halls and around campus about joining the union, and many others received emails asking them to join or sign an authorization card.

“We have undergrad organizers working with us that attend our weekly meetings and are doing outreach to undergraduates simultaneously to the outreach that we’re doing to graduate students. So it’s pretty much the same style,” Nicoludis said.

This agreement means Harvard’s graduate students will not pursue the department-by-department “microunit” strategy that Yale’s union effort opted for, where graduate students planned to hold separate elections in 10 Graduate School departments for a single bargaining unit. Yale’s administration challenged the unconventional approach, and the process in New Haven has thus far been tied up in NLRB hearings.

At Harvard, union organizers posted a celebratory picture of supporters in front of the John Harvard Statue on the group’s Facebook page Tuesday. “Today is FILING DAY!” the post reads.

Ph.D. student and union organizer Niharika N. Singh, one of the signers of the agreement, said she was “very excited” about delivering the petition to the University this morning, a required step in the process of filing a petition to the NLRB.

“We went in and signed the agreement and also delivered the petition, and the atmosphere was not tense,” Singh said.

Harvard administrators have adamantly opposed graduate student unionization since students began their movement in the spring of 2015. University President Drew G. Faust has repeatedly argued that a union of graduate students would change the relationship between students and Harvard from one based in academics to one based in labor.

But at the end of the summer, the NLRB ruled that private universities must recognize a union of student assistants, overturning precedent, thus legally mandating Harvard to do so should its graduate students organize.

Union organizers and the University’s labor representatives met for the first time Sept. 9, with students aiming to walk away with a formal neutrality agreement similar to the one New York University signed with its graduate student union effort in 2013.

Nicoludis said despite the progress toward an election, the HGSU-UAW was “very disappointed” that the University has not signed a neutrality agreement, saying that without such an agreement, “graduate workers aren’t able to decide on their own.”

Nicoludis said the union effort is continuing to garner signatures on its neutrality pledge campaigns; the pledge it circulated to faculty has over 100 signatures.

According to labor law expert and Stanford Law professor William B. Gould, a former chairman of the NLRB, the University could sign a neutrality agreement even now, “but the fact that they have entered into an election agreement means that this is very unlikely.”

Singh added, “If the administration still wants to come forward with neutrality, that would be great, but we’re looking forward to going ahead with the election.”

Although the Graduate Student Council became more involved in the issue when it voted to condemn the University’s amicus brief against unionization in April, GSC president Darcy L. Frear said the Council is a “neutral party.”

“Since the GSC represents all GSAS students we are a neutral party that supports those students who want to be a part of a union, as well as those who do not,” Frear wrote in an email. “I think the election is the best way to discover what the majority of students want.”