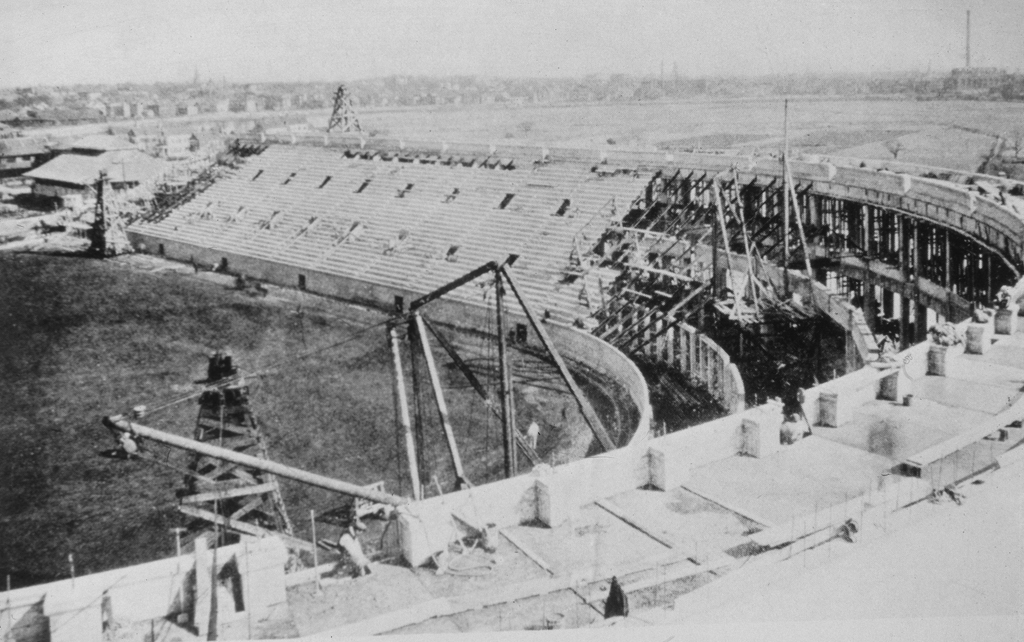 Right on Through the Ball Game

The Harvard Stadium was once “a student playground.”
By Hannah Natanson

The Harvard Stadium was once “a student playground.”

Its story starts with Major Henry L. Higginson, a veteran of the Civil War and founder of the Boston Symphony Orchestra. In 1890, Higginson presented the College with 31 acres of land in nearby Allston. His gift, he said, came without strings.

“My hope is that the ground will be used for the present as a playground for the students,” Higginson told a large crowd of students and faculty packed into Sever Hall. “But the gift is absolutely without condition of any kind.”

Higginson’s only stipulation: that the land be called “Soldiers’ Field” in honor of six friends of his, all Harvard graduates who gave their lives fighting for the Union in the Civil War. The field—and the larger athletic complex eventually constructed there—still bears that name.

For a time, the future home of Harvard football hosted a different sport. Until 1903, the College’s baseball team competed on Soldiers’ Field, while spectators crowded into rickety wooden grandstands to catch the action.

Then-University President Charles W. Eliot hated the bleachers, remarking once that the athletic fields would never be “beautiful” so long as “those squalid banks of seats” continued to “deface” them. In the spring of 1903, Eliot finally found an excuse to do away with the grandstands—an entire section caught fire during a baseball game against Princeton. Though no one was injured, Eliot put his foot down. The wooden bleachers were demolished.

Nonetheless, Harvard needed someplace to host sports fans on game day. Engineering Professor Ira N. Hollis, then Chairman of the Athletic Committee, rose to the challenge, envisioning a “viewing stand of a size then, so far as known, unmatched in modern times,” according to an alumni bulletin penned in 1916 by his colleague, Engineering Professor Lewis J. Johnson.

The only obstacle? Funding.

The University refused to contribute a single dollar. Johnson recalled that “money was of course scarce” at the time. Providence intervened in the form of the Class of 1879, who around then finalized their 25th Reunion gift: $100,000 donated towards the construction of a football stadium. The Athletic Department agreed to contribute $75,000, and the deed was done.

Hollis threw himself into the work. He became so “identified” with the project, The Sunday Herald reported in November 1903, that his students’ “proposed that the name be changed from the Stadium to the Holliseum.”

After Hollis settled on the design (a traditional Greek ‘U’) and a material (reinforced concrete), construction began apace. Engineers hurried to ready the stadium for the Crimson’s inaugural game there against Dartmouth on Nov. 11, 1903, roughly eight months after ground was first broken on the site.

The engineers’ plans succeeded, almost. At kickoff, the Stadium’s stands had yet to be completed. According to Bill Cunningham of The Boston Herald, one foreman instructed his laborers to continue working “right on through the ball game.”

The workers, however, had other ideas. Numbering among Harvard fans that day were “a group of Italian laborers who laid down their trowels to watch, and who shortly were giving their vocal all,” Cunningham writes.

Despite its fancy new stadium, the Crimson was unable to pull out the win, losing 0-11 to a strong Dartmouth side—Cunningham deemed the 1903 Big Green “mighty of muscle, fast afoot, and well equipped between the ears.” The result marked the first Dartmouth victory over Harvard football in the history of the game.

Reflecting on the day, Johnson praised the Stadium but wrote that “it may be best to draw a veil over the [game’s] results.”

Contrary to Johnson’s wishes, one Stadium worker at the game that day ensured the score would never be forgotten. After the final whistle blew, he climbed a ladder and scrawled “11-0” in the still-soft concrete by one of the Stadium’s colonnades.

“When Dartmouth beat ’em, I thought I might as well autograph the place for all time,” he told Cunningham years later. “I don’t know why I did it. None of my people went to college, but if you ever want to prove [Dartmouth] beat ’em 11-0, there it is–gouged good and deep.”