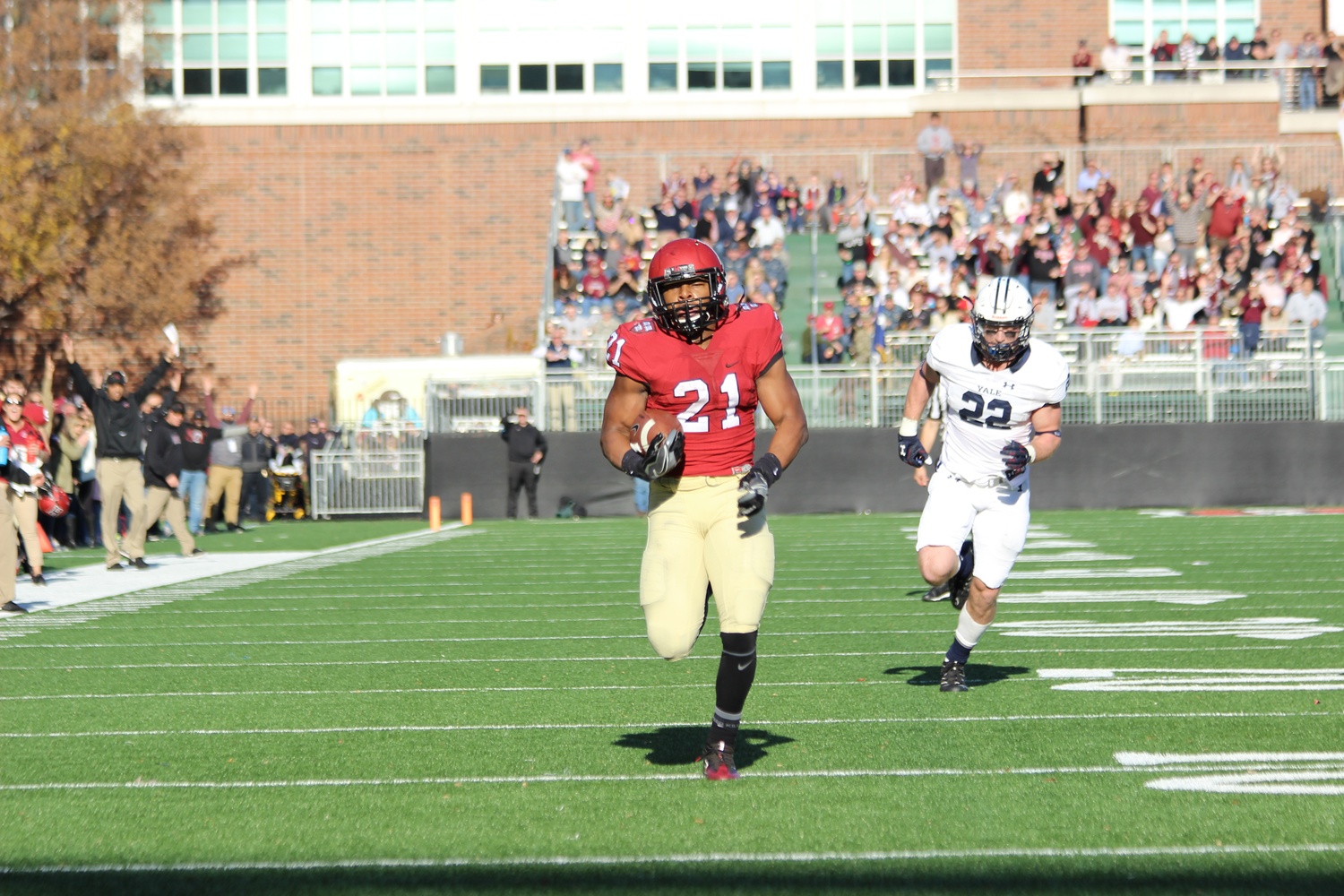 In the 133rd playing of The Game, sophomore running back Charlie Booker broke a scoreless tie with a 27-yard touchdown in the first half. By Thomas W. Franck
By Sam Danello, Crimson Staff Writer

After nine years of Harvard dominance, The Game belongs to Yale once more. 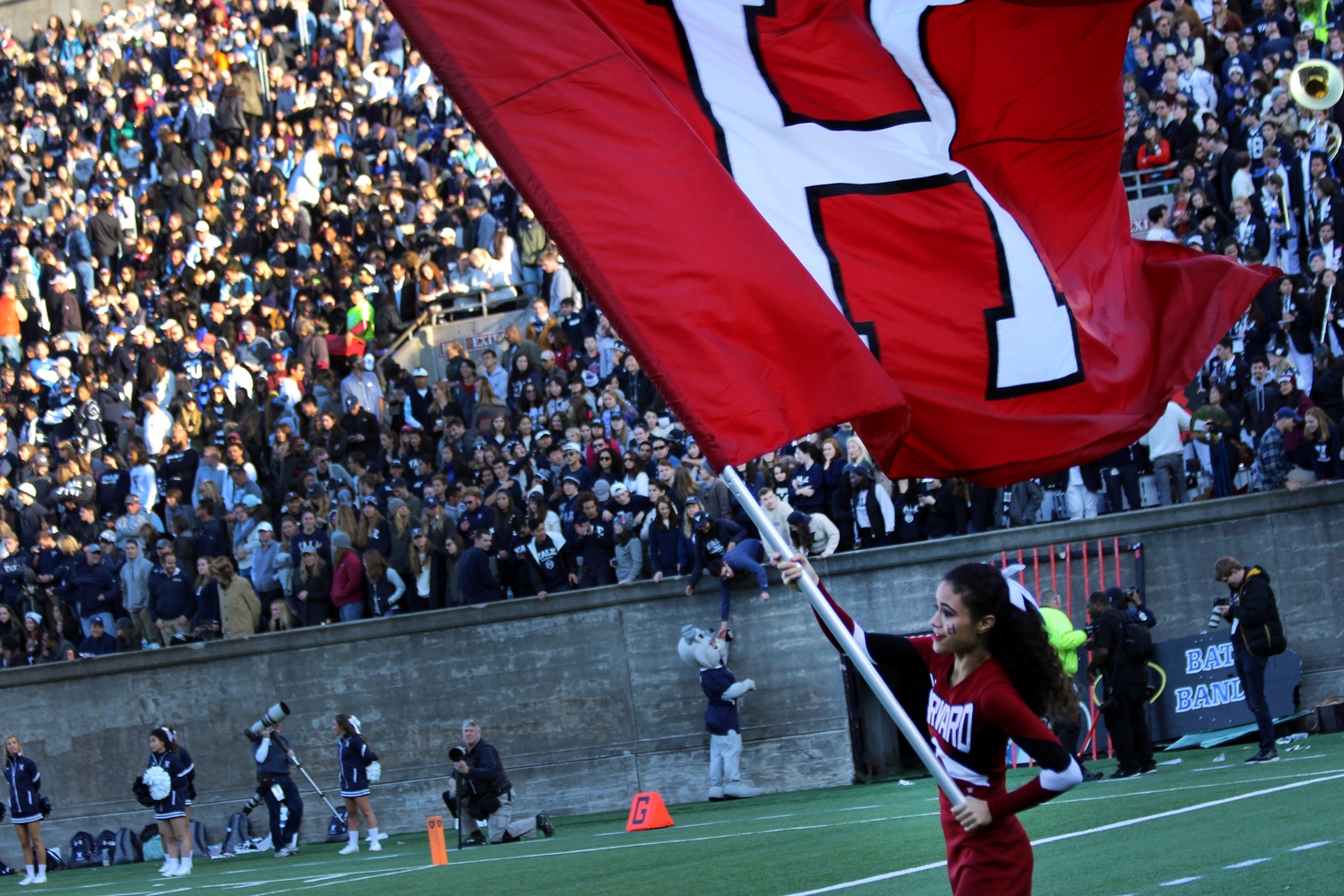 Besides breaking the nearly decade-long win streak for the Crimson (7-3, 5-2 Ivy), the Bulldogs prevented the hosts from claiming a share of the Ivy League title. Had Harvard triumphed, the team would have completed a four-peat for the first time in school history.

Instead, Penn and Princeton ended in a two-way tie for first thanks to wins over Cornell and Dartmouth, respectively.

“It’s heartbreaking,” Harvard coach Tim Murphy said. “When you realize that you work out 320 days a year for only 10 opportunities, and obviously it all culminates with the Harvard-Yale game, I just feel terrible for our kids.”

Yale’s go-ahead score came late in the fourth quarter, on an 80-yard drive that heated the Bulldogs crowd from tepid enthusiasm to blistering cheers. During the possession, Rawlings went five-for-seven and added 17 rushing yards. 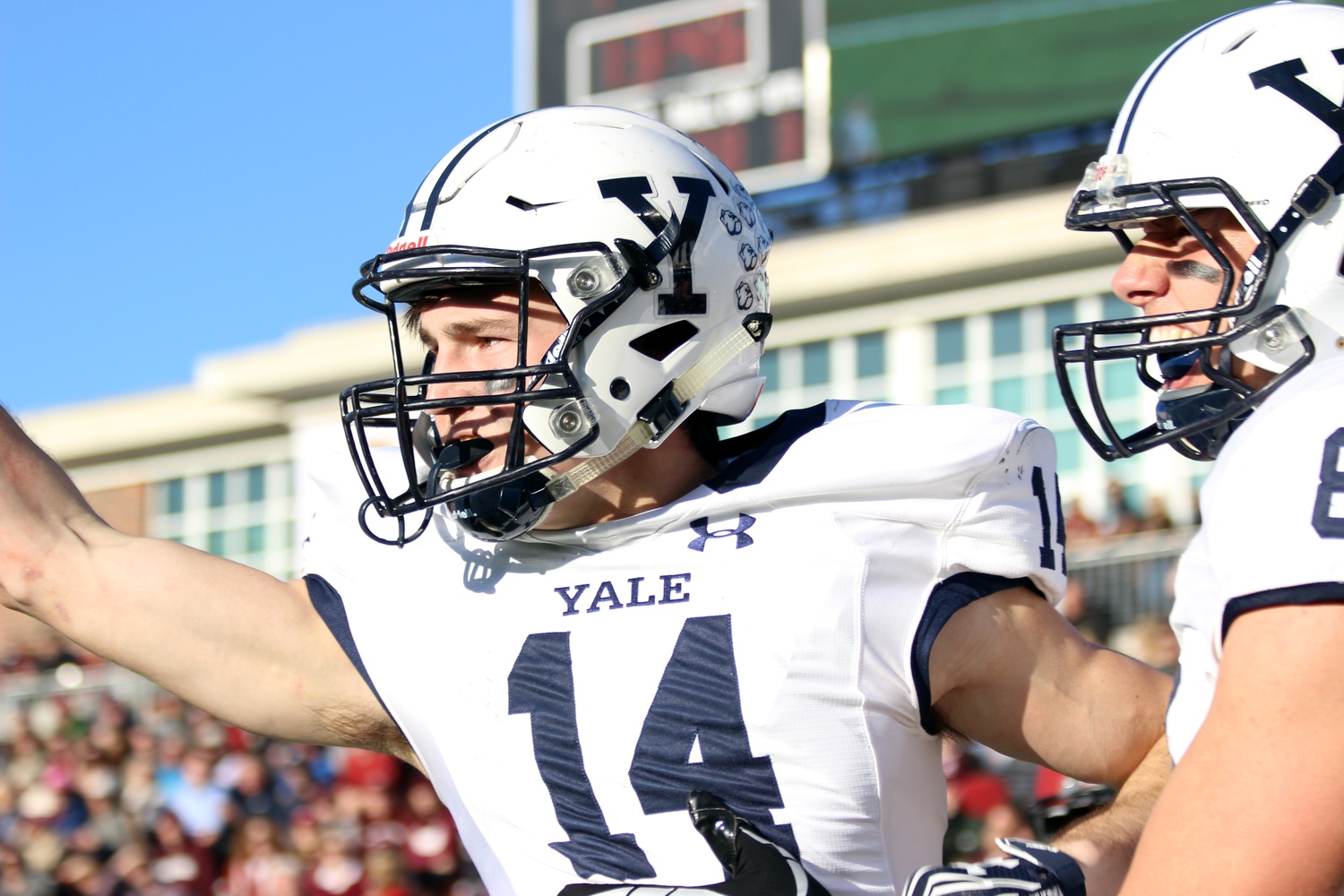 Nothing was certain until third-and-goal from the three. That’s when the Yale thrower found Klubnik just across the goal line. Bulldogs 21, Crimson 14.

“I was overjoyed, obviously,” Yale captain Darius Manora said. “I was more proud...of these young guys to my left and my right, [Klubnik and Rawlings], and a lot of the young guys who stepped up over the last few games.”

Harvard had two chances to even the score in the waning moments. But with less than four minutes left, a holding call stalled the Crimson at its own 14 and forced a punt.

Later, with 1:13 remaining, Harvard regained the ball at its own 20. The team marched to the Yale 48 but got no further. Three passing plays gained six yards, and on fourth down, junior defensive back Alessi broke up a throw intended for Crimson halfback Anthony Firkser. 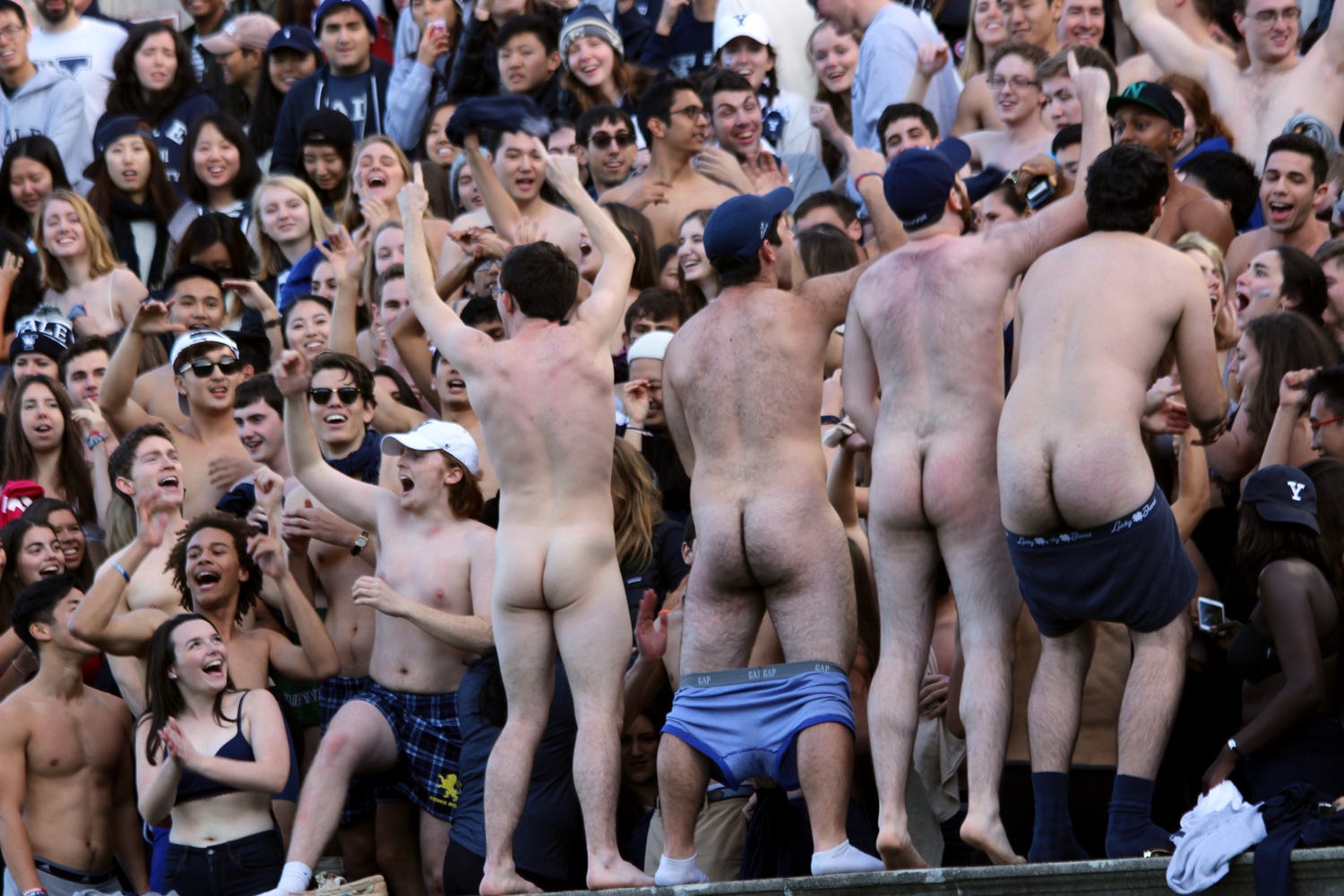 The Bulldogs seized momentum at the start of the second half. With the score locked at 7-7, Yale sophomore Alex Galland jogged on for the kickoff. Instead of booting deep, Galland dinked the ball, raced 10 yards forward, and dove to the turf to recover the surprise onside kick.

“When you get into nine games of film on opponents, there are a lot of tendencies that build up,” Yale coach Tony Reno said. “There was a tendency there. We felt that it was something that was a really good opportunity for us.”

The play jumpstarted the Bulldogs’ offense. On first down from the Harvard 28, Klubnik ran a wheel route to the right pylon. Not even pass interference by senior defensive back Raishaun McGhee could prevent the catch, and Klubnik came down with a score and a 14-7 lead.

The Crimson responded with a lengthy drive—10 plays and 84 yards. The possession seemed in danger on third-and-five from the Harvard 21, but Viviano found Firkser for a 36-yard gain to the Yale 43.

Another key conversion came on a fourth-and-three from the Yale 36 when, with the Bulldogs crowd roaring, Shelton-Mosley outraced his defender for a 34-yard gain. The effort cashed out three plays later when senior tight end Ryan Halvorson tied the score at 14-14 with a third-down score. 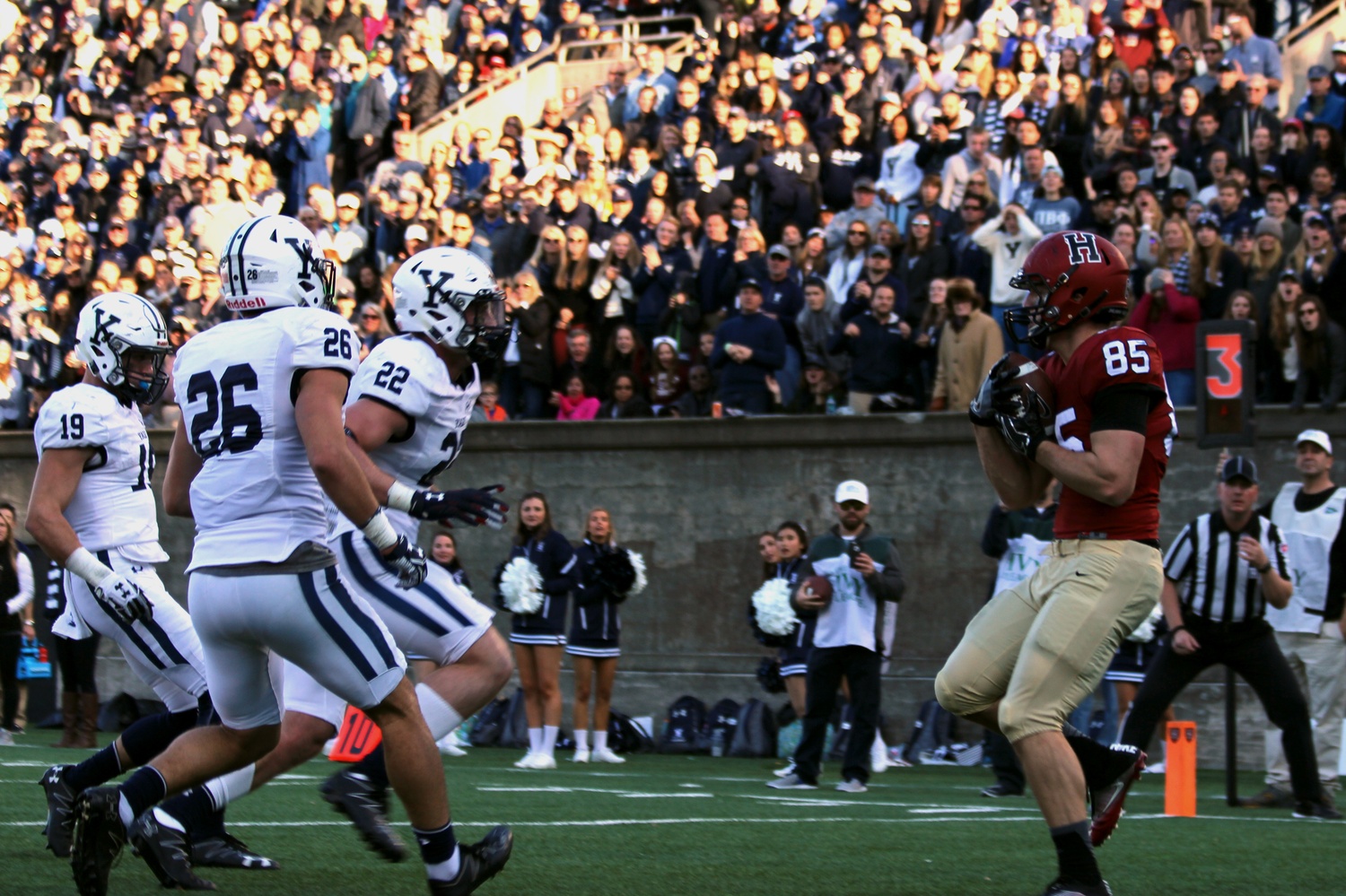 After a four-turnover loss against Penn last week, Harvard did not commit one against Yale. Senior quarterback Joe Viviano finished 16-of-28 for 181 yards, and the team’s rushing attack totaled 148 yards on 36 tries.

Still, the Crimson crippled itself with self-inflicted wounds—in this case a missed field goal. With the score tied at 14 early in the fourth quarter, Harvard marched 79 yards into the red zone. However, a holding penalty backed up the offense.

Ultimately freshman kicker Jake McIntyre trotted out and sent a 35-yard attempt wide left, the second misfire of his career.

Meanwhile the Bulldogs benefitted from slick special teams play. Before the onside kick, Yale nailed a trick play on fourth-and-four near the end of the first half. Holder Andrew Johnson took the snap and stepped forward a few yards—only to toss the ball to senior tight end Leo Haenni.

The Tebow-esque completion pushed Yale inside the red zone for the first time all day. With 27 seconds to play in the half, Bulldogs freshman running back Alan Lamar burst forward for a one-yard touchdown to tie the game at 7-7.

That excitement followed a slow first quarter in which neither team drove past the opponent’s 40. The Crimson won the field-position battle, pinning the Bulldogs offense inside the 20 on three consecutive positions. 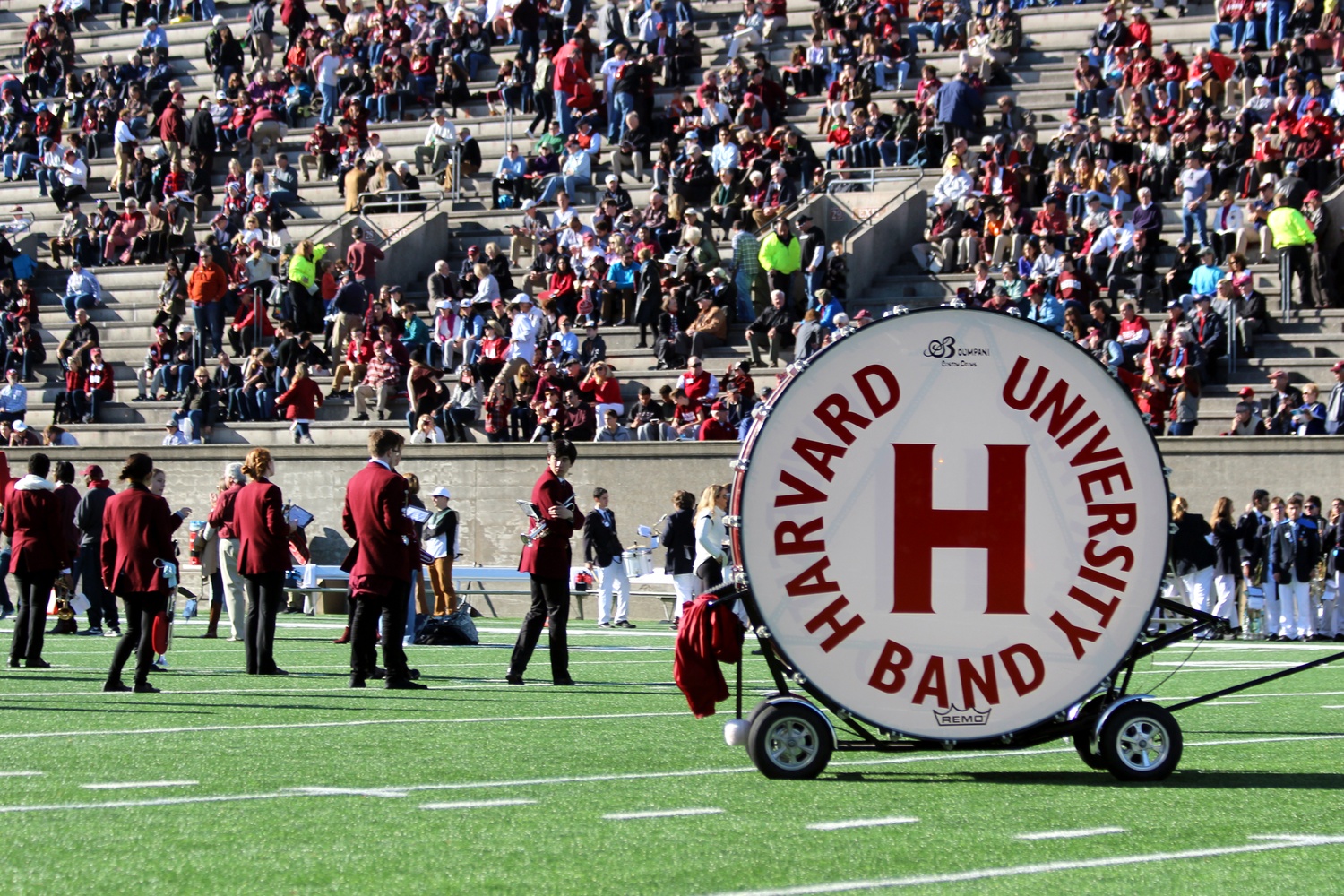 However, the Harvard offense failed to advantage of the favorable conditions. Viviano did not complete a pass in the opening period, and at the end of 15 minutes, the score still stood at 0-0.

“[This] reality is something we haven’t experienced in a long time,” Murphy said. “You can put it all out there, you can work as hard as you can, you can believe, and when you do that, you still risk getting your heart broken. That’s certainly what happened today.”