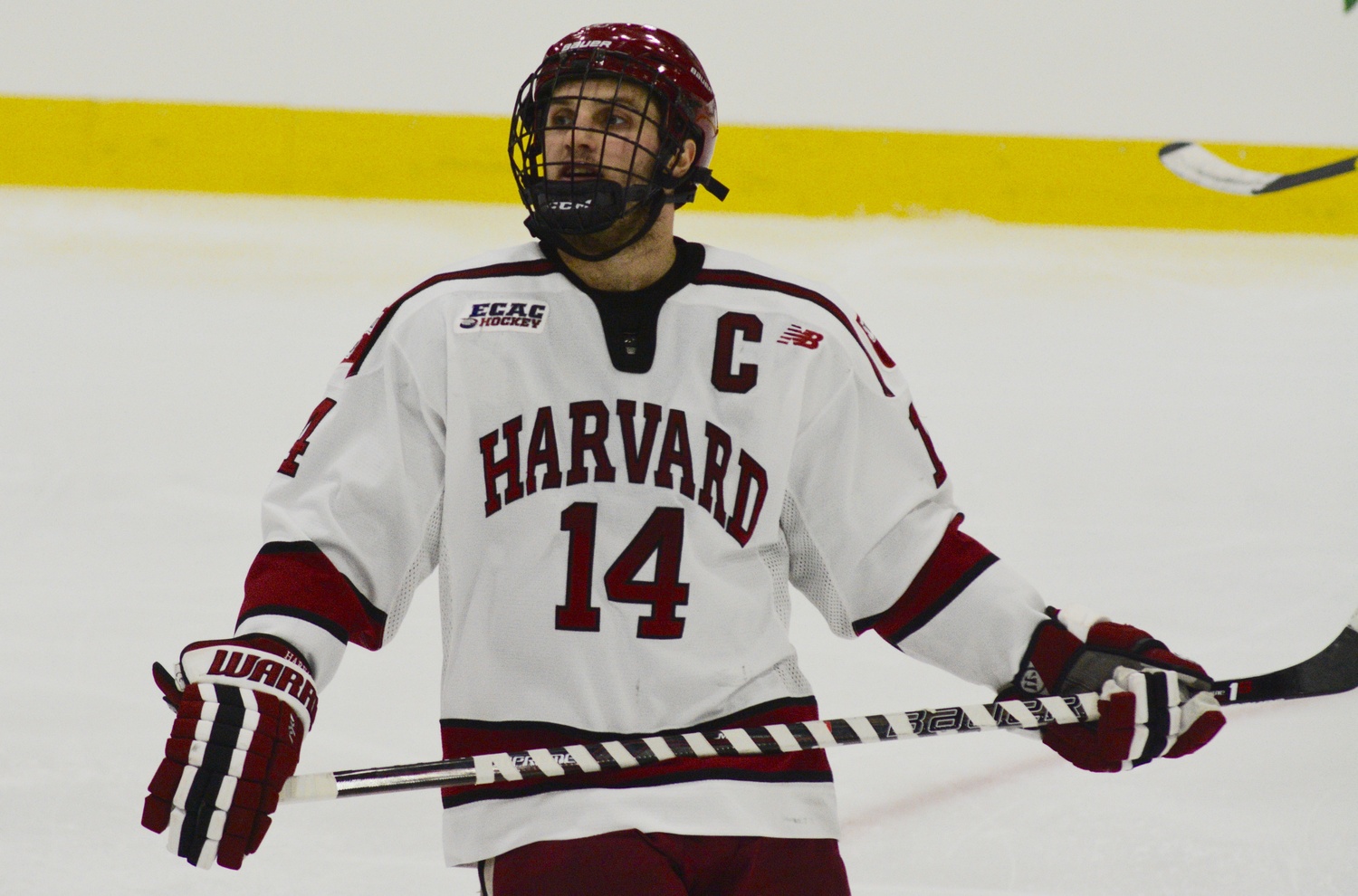 Co-captain Alexander Kerfoot's first goal of the season with 7:08 remaining in Friday night's ECAC opener earned Harvard a point out of what was an otherwise frustrating contest for the Crimson. By Jake Meagher
By Jake Meagher, Crimson Staff Writer

The Harvard men’s hockey team dominated the start of its ECAC opener Friday night. But the scoreboard presented a dissenting opinion.

Despite outshooting visiting Colgate, 18-2, over the first 20 minutes, the No. 12/12 Crimson left the Bright-Landry ice at the end of period one trailing, 1-0. And Harvard’s frustration would only continue to mount.

The Crimson doubled the Raiders’ shot totals in each of the next two frames, but Colgate—led by senior goaltender Charlie Finn—continued to hold the Harvard offense at bay. Co-captain Alexander Kerfoot salvaged a 1-1 tie courtesy of a power-play equalizer with 7:08 left to play, but the story of the contest was the Crimson’s problems translating puck possession into production.

Harvard’s territorial advantage was largely evident in 5-on-5 play—and the shot count reflected it—but with the Crimson (2-0-1, 0-0-1 ECAC) drawing seven man advantages to Colgate’s three, the possession battle only grew increasingly lopsided. Yet, Harvard’s power play unit—which ranked fifth in the nation a season ago—came up empty on its first six attempts. 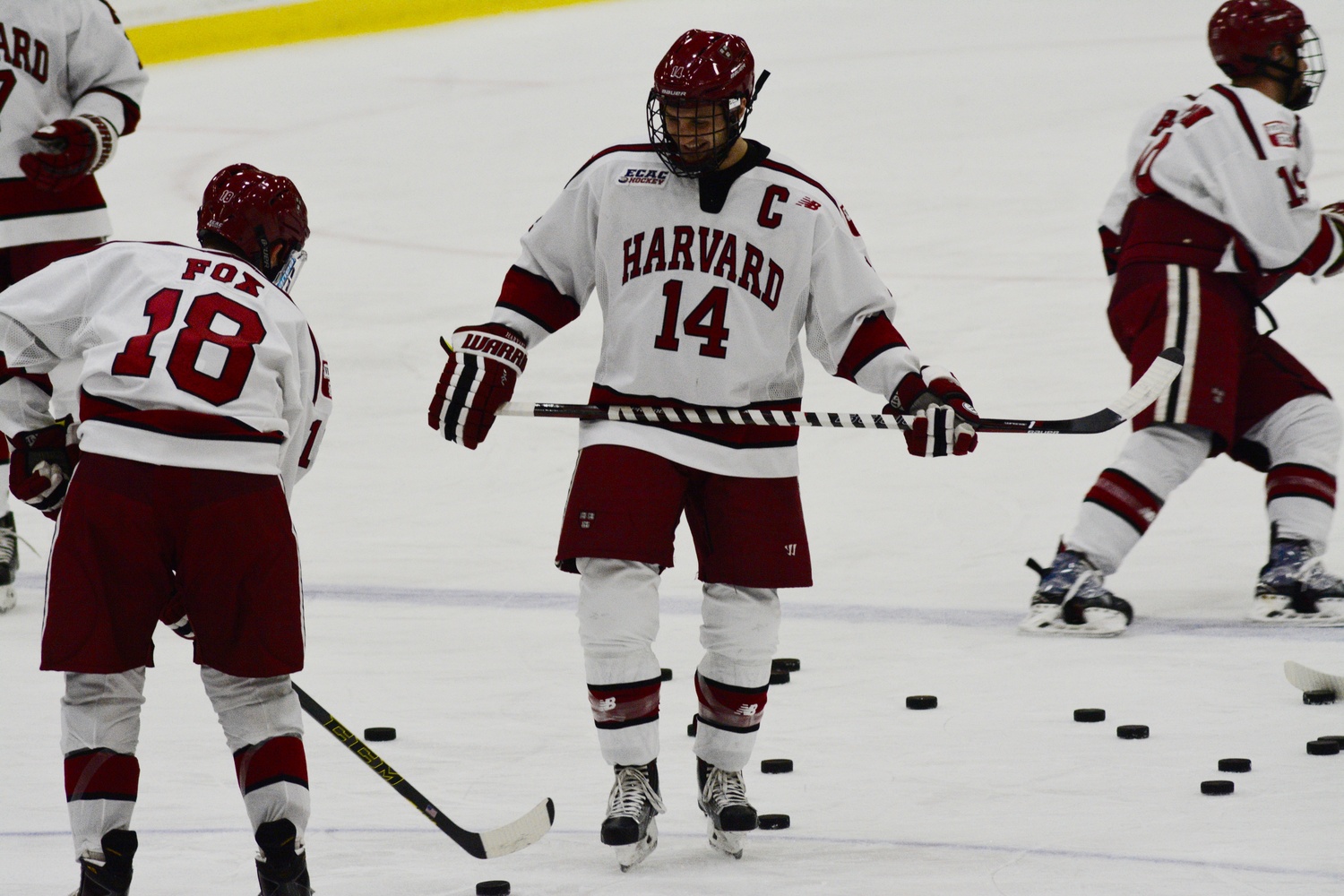 But the seventh time was a charm. Midway through a Jake Kulevich holding penalty, the Crimson’s top special teams unit finally broke through. Drifting in front of the net after winning a draw, Kerfoot—who admitted he’s ‘usually not too good’ from that very spot—managed to tip home rookie defenseman Adam Fox’s blue-line wrister to even the score at one.

The conversion provided Harvard’s special teams unit with something to feel good about, but moving forward, Kerfoot said he’d like to see the power play move the puck a bit quicker.

“It’s going to take time,” Kerfoot said. “It’s the [third] game of the season, and we’ve got a pretty new unit put together right now. It’s one game, and I don’t think that’s going to define our season.”

Theorizing what went wrong on the man advantage, Harvard coach Ted Donato ’91 said when a goalie gets hot, guys often become too selective with their shots, thinking they need to generate the ‘perfect’ attempt to have a chance of scoring. That theory checked out on Friday, as the Crimson hardly threw any pucks on net that led to second-chance opportunities against Finn, who made 41 saves—two shy of his career high.

“He has shown in the past he can get hot and steal a game,” Donato said. “It was something we actually talked about this morning, so I don’t think we were surprised. But I’d be lying if I didn’t say we weren’t a little frustrated.” 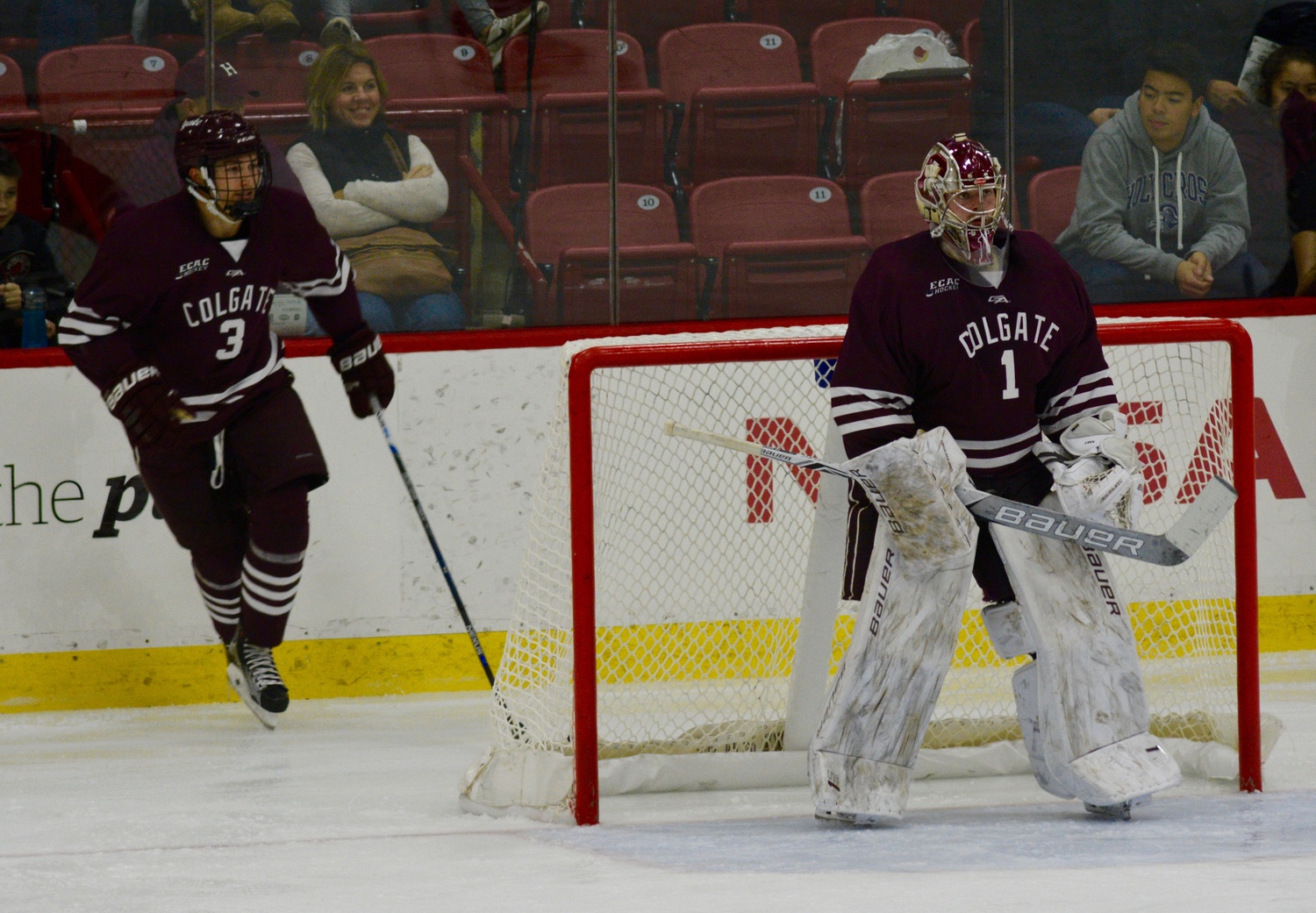 “I haven’t seen him find a puck like he did tonight,” Colgate coach Don Vaughan said. “He was finding a lot of pucks through traffic, and when he’s doing that, he’s really on his game.”

Finn finished one bounce shy of a clean sheet, which would have earned the Raiders (1-3-4, 0-0-1) their second win of the season. For a while, freshman defenseman Ross Craig looked like he might have provided Colgate with all the offense it would need 10:12 into the first period when his blue-line blast bounced off the glove of junior goaltender Merrick Madsen and in.

But ultimately, Kerfoot would equalize in period three, setting up a thrilling finish to regulation. Seconds after Madsen stoned sophomore Hunter Racine on a breakaway along the wing with 1:40 remaining, Finn returned the favor, denying sophomore forward Lewis Zerter-Gossage’s dangerous wrister in transition with his right pad.

And down the ice the Raiders went again. The Crimson counter quickly gave way to a Colgate one, as freshman Jared Cockrell rushed up the left wing and fired a shot that Madsen had to scramble to stop.

Chaos ensued as the rookie went sliding into the goal. The puck slowly rolled outside the blue paint to freshman Tyler Penner, and with Madsen out of position, the rookie likely could have picked his spot; but instead he one-timed a shot that sailed wide of the half-empty net, allowing Harvard to escape the danger.

“I thought we had a pretty good third period,” Vaughan said. “I thought we battled hard, we got some opportunities, and we could’ve stole a win on the road against a very good team.”

Both teams generated opportunities in the five-minute overtime period but none better than those of the wild final two minutes of regulation. By game’s end, the shot count read, 42-15, in favor of the Crimson.