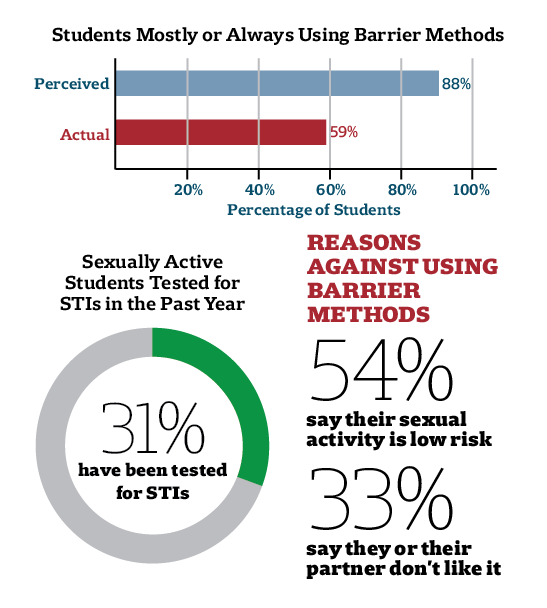 Sixty percent of Harvard College students reported having sex in a 12-month period, and many of them did so without protection.

“What the data is telling us, from the survey, is that we have a bit of work to do in sexual health,” said Maria Francesconi, director of HUHS Health Promotion and Education.

Sexual health was one of several topics that HUHS surveyed College undergraduates about last March in an anonymous health assessment designed to better understand students’ personal habits and behaviors. HUHS Director Paul J. Barreira said the survey informs how his division thinks about programming in response to current student trends.

In total, about 45 percent of College students completed the survey, representing the highest participation rate in the survey’s history, according to Barreira.

Among the reasons for not using barrier methods, 54 percent of students answered that they thought their sexual activity was low-risk and 32.6 percent responded that “they or their partner don’t like it.”

In addition, even for students who were sexually active in the preceding 12 months, only about 31 percent reported having been tested for sexually transmitted infections during the same period. Francesconi, who oversees much of HUHS’s student health programming, said the Center for Disease Control generally recommends that sexually active individuals be tested for STIs at least once a year and more often for those at high-risk.

While administrators did not expect the statistics regarding student sexual health practices, but did expect another concerning trend—an increase in emotional distress.

Since the administration of the last health survey in 2014, the prevalence of anxiety disorders rose from 8 percent to 13 percent. The increase in anxiety among college students mirrors the national trends found in a recent survey by the Association for University College Counseling Center Directors.

HUHS administrators have noticed the emphasis students have placed on issues of mental health.

“We didn’t expect the numbers to be so low of consistent use of safe sex practices; I think we’re always paying attention to the emotional mental health issues,” Francesconi said.

Barreira said he thinks it is important for HUHS to look at this data holistically when addressing underlying issues. To him, this means understanding how the combination of behaviors like sleep, stress management, drinking, and physical activity affect student well-being.

He said the data from the health assessment was also shared with student peer education groups in addition to the UHS-College Committee, a group of College administrators, HUHS staff, and students who coordinate activities around student well-being.

“We’re going to always look at the intersection between personal habits and emotional well-being,” Barreira said. “We need to think about it with many student communities. Once this data is there, what is the way to communicate it to people?”