Faust Says Harvard Will Not Be a 'Sanctuary Campus' 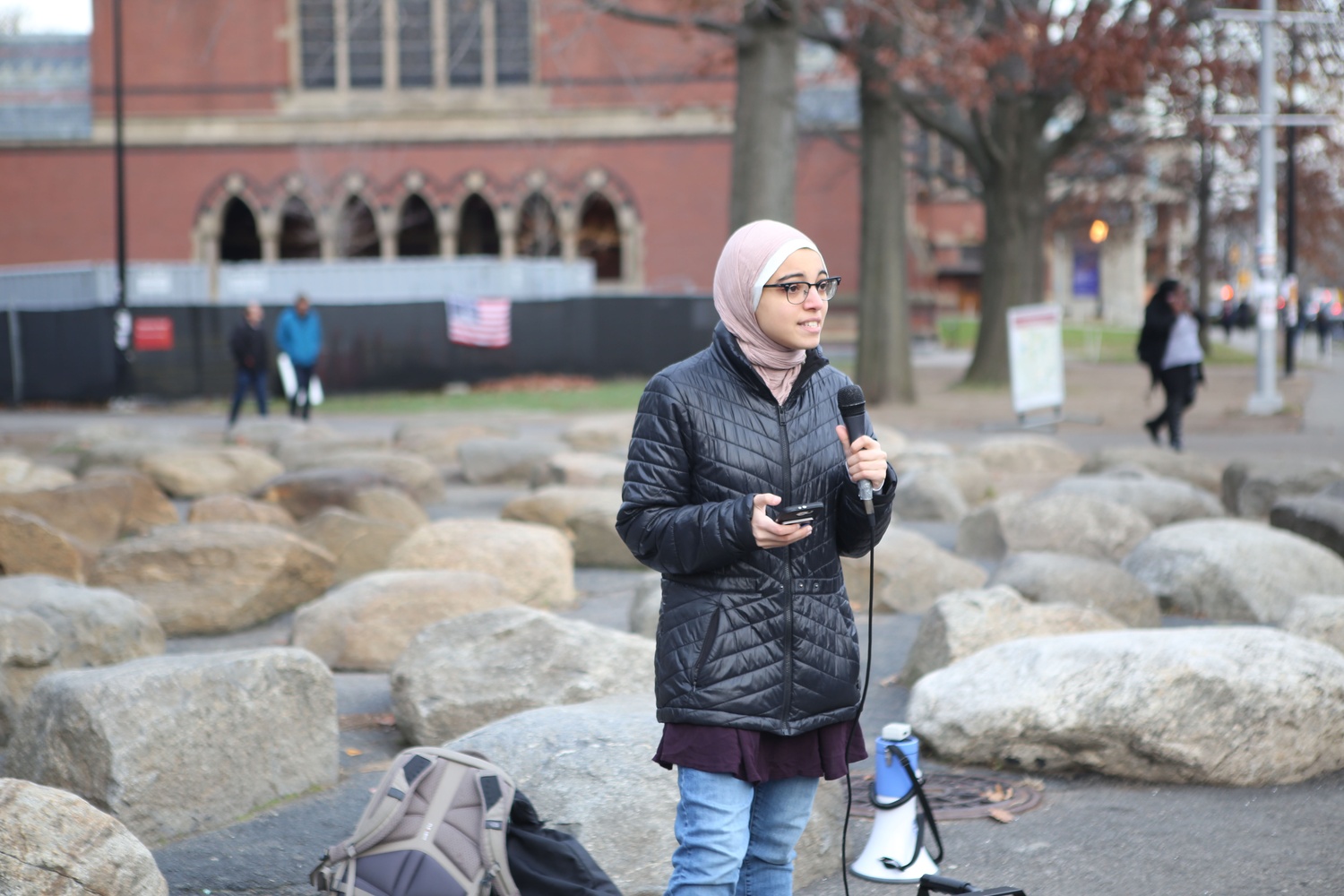 Anwar Omeish ‘19, the Director of External Relations of the Harvard Islamic Society, speaks to the crowd rallying in support of Harvard being a sanctuary campus in the Science Center Plaza. This motion was advanced by History professor Walter Johnson, who also spoke at the rally. By Cynthia Guo
By Hannah Natanson, Crimson Staff Writer

University President Drew G. Faust said Harvard will not designate itself a “sanctuary campus” at a Faculty of Arts and Sciences meeting held Tuesday afternoon in the Science Center.

"It also risks drawing special attention to the students in ways that could put their status in greater jeopardy," Faust said. "I believe it would endanger, rather than protect, our students, and that is not something I am willing for this institution to do."

Faust spoke on the subject in response to questions history professor Walter Johnson raised during the meeting. He asked what steps the University will take to protect its undocumented students and other minority groups he said are threatened by President-elect Donald Trump’s proposed policies.

In her response, Faust noted initiatives the University has undertaken to support undocumented students in recent weeks, including hosting immigration experts and appointing Lars Madsen, Faust’s chief of staff, as a coordinator for advising efforts for undocumented students. Last month, Faust, in an email to Harvard affiliates, reiterated a message from Harvard University Police Department Chief Francis D. Riley indicating that the department will not ask about the immigration status of Harvard affiliates or enforce federal immigration laws.

At the meeting, Faust also discussed how the University would continue to lobby for federal research funding and a tax-exempt endowment under the Trump administration. She rejected the idea of sanctuary campus status, however, arguing that the name lacks a clear definition.

"Sanctuary campus status has no legal significance or even clear definition. It offers no actual protection to our students. I worry that in fact it offers false and misleading assurance," Faust said.

Faust’s statements came just minutes after students and faculty wrapped up a rally held in support of Johnson’s motion outside the building. Roughly 100 Harvard affiliates gathered in the Science Center Plaza to urge administrators to designate Harvard a sanctuary campus.

“I’m here to be a witness to your patriotism and to your love of this university,” Johnson said at the rally. “And I’m here to ask this nation and this university to fulfill the promise that you all represent.”

Over the course of the hour-long rally, speakers from across campus—ranging from Harvard freshmen to tenured professors—discussed the pain and fear they said undocumented students have felt in the wake of the election.

Daishi Tanaka ’19, an undocumented student, echoed Delgado’s sentiments. He said his life on campus has “definitely” changed for the worse since Trump won the presidency, and that the idea of a sanctuary campus is “personally important” to him because it would grant him a “mental security” he now lacks.

As Delgado and others wrapped up their speeches and the assembled crowd chanted slogans like “No justice, no peace!”, Faculty of Arts and Sciences professors began to file into the Science Center ahead of the Faculty-wide meeting. Some stopped to listen, others hurried past.

Dean of the College Rakesh Khurana paused for a moment to watch the protesters before entering the building.

As the rally neared its conclusion, Anastacia M. Valdespino ’18, one of the event’s organizers, grabbed the microphone and eyed the stream of professors entering the Science Center.

“I’ve seen multiple professors, some whom I’ve had, walking into the Science Center for their meeting,” she said. “We hope they know that Harvard needs to be a sanctuary campus.”