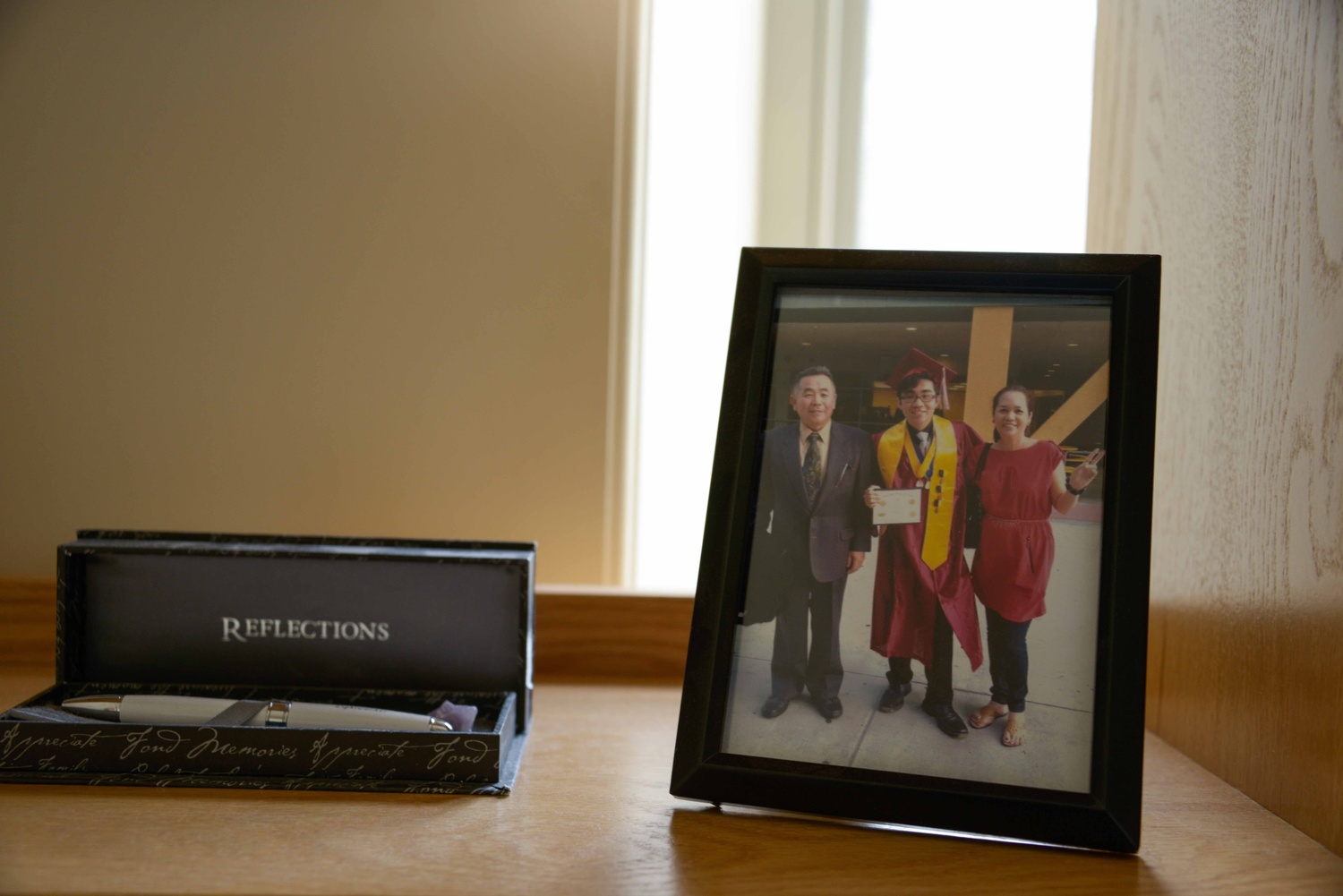 Within his first 100 days in office, Trump hopes to begin building a wall on the southern border of the U.S. and repeal several executive actions of the Obama administration, likely including Deferred Action for Childhood Arrivals (DACA), which allows hundreds of thousands of undocumented young people to live, work, and drive in the U.S. legally. Undocumented immigrants, at Harvard and elsewhere, are feeling fearful.
By Marella A. Gayla

All the interviews seem to start the same way. We say hello, and I ask how things are going, and we share a dry, tight-lipped smile, because we both know that question does little justice to its answer.

We aren’t strangers. I interviewed each of my subjects for an article about undocumented students back in September, and I’ve collected fragments of their lives in the back of my mind: Jin K. Park ’18, frantically searching for burn remedies after his father, who was ineligible for most forms of healthcare, was injured on the job; Shankar Ramkellawan ’19, sharing a one-bedroom apartment with his family after immigrating from Guyana; Daishi M. Tanaka ’19, living alone in Los Angeles after his undocumented parents left the country and wondering when he would have the money to visit them.

But a lot has happened since September. The leaves have turned, dining hall workers have gone on strike and returned to work, heavy jackets have emerged from storage bins, and Donald Trump has ridden a current of anti-immigrant fervor into the White House.

Within his first 100 days in office, Trump hopes to begin building a wall on the southern border of the U.S. and repeal several executive actions of the Obama administration, likely including Deferred Action for Childhood Arrivals (DACA), which allows hundreds of thousands of undocumented young people to live, work, and drive in the U.S. legally. Undocumented immigrants, at Harvard and elsewhere, are feeling fearful.

Realizing that there are few interview questions that could adequately address the anxiety and uncertainty facing undocumented immigrants at this moment, I lead each conversation with the same first prompt: “Talk me through your election night.”

Most Harvard students, undocumented or not, seem to have entered Nov. 8 with some feeling that Hillary Clinton would win the White House by the end of the night. By around 10 p.m., however, Trump had clinched several key swing states, and the possibility of his election became material.

“I didn’t say it, but I knew in my heart that he was going to win, and it was soul-crushing,” Ramkellawan recalls. He had been watching the election results “passively” and doing homework with friends at the Winthrop House watch party until the New York Times reported an 80 percent likelihood of a Trump victory. “Then, we stopped p-setting,” he says. “We had to watch the election.”

Tanaka hosted a viewing party for Act on a Dream, Harvard’s immigration advocacy group, in his 10-person suite in Quincy. As swing states turned red, the room went silent. People paced, cried, and called their family members. Eventually, Tanaka sent everyone home to get some sleep. “We really wanted everyone to rest and take care of themselves, however that may be,” he says.

Maribel Nava ’20, a member of Act on a Dream and an American citizen born to undocumented Mexican parents, stayed up until 5 a.m. “I didn’t want to fall asleep, because waking up would make it real,” she recalls.

The days that followed looked different for everyone. Ramkellawan dropped a p-set and a late-night shift at the Y2Y homeless shelter. Park refused to skip class after the election. Tanaka slept, took walks on the river, and spent time with his blockmates, whom he considers his family.

Ilian A. Meza-Peña ’17 found solace in the classroom. Armed with a roll of toilet paper for wiping tears, she attended “American Protest Literature,” taught by Timothy P. McCarthy ’93, and “Performing Latinidad,” taught by Lorgia H. Garcia Peña, although she is not currently enrolled in either course. In “Performing Latinidad,” students held each other and talked about how to take action. Garcia Peña led her students in planning a rally for undocumented students and writing a petition calling for their protection, which has collected more than 4,000 signatures so far.

Whether or not the end of the week included missed homework and extra sleep, the quiet, gray days after the election have forced undocumented students to grapple with difficult questions of citizenship and belonging. Most have met these questions with a mixture of despair and steely resolve.

Tanaka describes a “disconnect” with his parents, who currently live in Asia and assured him that he could just return to Japan. “It’s a very scary situation. It’s a lot of uncertainty,” he says. “I just know that this is my home and I’m not going to leave—I’m here to stay.”

Park says that the bleakness of the future is part of the existing “immigrant character,” and that progressive immigration policies, like DACA, have only come about after great hardship. “It’s not like we ever took a politician’s shit, ever, and that’s how we’re looking at it now,” he says, trailing off. “But yeah, it’s pretty hard.”

The conversations seem to, for lack of a better term, hit a wall when I ask about specific plans for the future. By the time this story goes to print, 63 days will remain before Trump is inaugurated. It’s hard to say exactly what he will do, and when. With only blustery promises of walls and mass deportations to work from, planning the next four years as an undocumented immigrant seems both crucial and impossible.

Since we last spoke in September, Ramkellawan’s parents have become Green Card holders, and they will be able to apply for his legal residency in the U.S. The process will likely take about two years. He needs to renew DACA, which will be valid for two years if the Trump administration does not nullify the program. If all of the paperwork gets processed on schedule, Ramkellawan will live legally in the U.S. without a hitch. If not, he could be left without a Social Security number and work permit for several months, his life in limbo.

Enrique Ramirez ’17 is relieved that his parents are moving to Austin, Texas. They’ll live with his older sister, and drive less frequently. “Trump won’t necessarily have the power to deport all illegal immigrants, but he can maybe reinforce things that are already at play, like road checks,” he explains. Since the election, he has placed some of his Act on a Dream projects on the back burner.

“I was working on a handbook for undocumented students who want to study abroad, but what’s the point if I’m just going to get deported?” Ramirez gets quiet. “I’m joking, I’m joking.”

Nava says that she and her mother have already walked through the worst-case scenario. “She said, ‘Even if the worst happens, I’m still going to be with you, just in a different place,’” Nava recalls. “My siblings would go with them, and I would stay here, and I just felt so lonely in that moment.”

When I meet with Meza-Peña, she wears her History and Literature concentration t-shirt. “I’m so close to finishing my degree,” she says. “And the plan I have for myself is now going to be compromised.”

She lists the fellowships and jobs she wants to apply for, the opportunities she can only seek because she has DACA. Like Nava, she tells me her parents have begun to make custody arrangements for her younger siblings in case of their deportation.

Meza-Peña hopes to create a handbook for undocumented immigrants who are being deported, or for those with loved ones in deportation proceedings, complete with lawyers’ phone numbers and directions for navigating the complex telephone systems of deportation centers. She talks me through a process that involves PIN numbers and adding credit to an account.

“I just see it as a toolkit, like one you would have in case of earthquakes, or a tornado,” she says.

Before I part ways with Ramkellawan in Winthrop dining hall, I ask if he still carries his DACA papers with him everywhere—something I had recognized as a poignant, if slightly paranoid, quirk the first time we met.

“Yeah,” he says. “And it’s probably more important now than it was before.”