Athlete of the Week: Kerfoot Is Making More Plays Than Ever 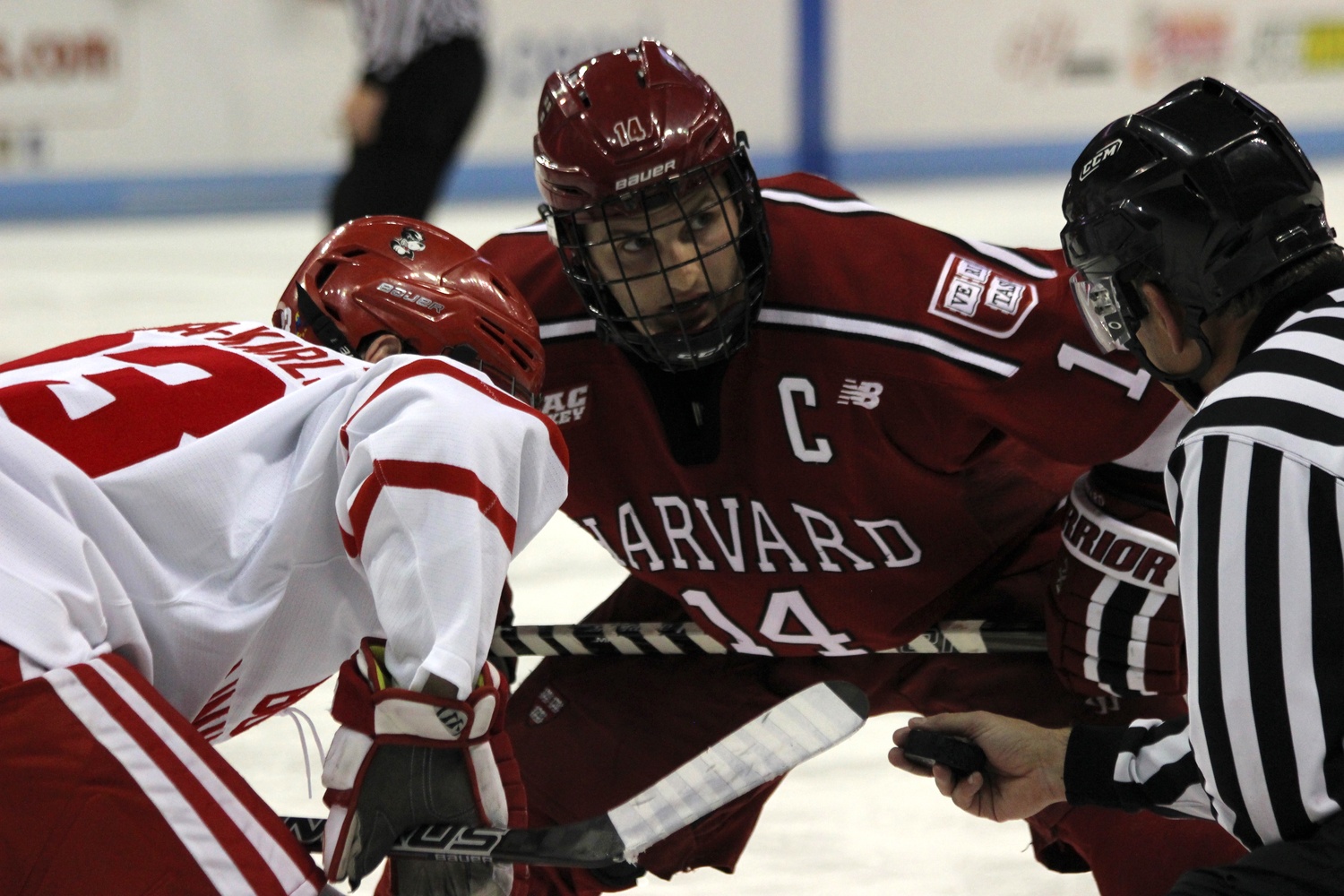 Throughout the years, Alexander Kerfoot has regularly referred to himself as a “playmaker.” But never has his choice of vocabulary been more appropriate than now.

Remember that hypothesis predicting Harvard’s co-captain might see his production drop without the heroics of Jimmy Vesey and Kyle Criscuolo? That’s now obsolete. Because Kerfoot looks to be on his way to the best season he’s ever had.

It was never Kerfoot who drew skeptics; it was his line. With Vesey and Criscuolo playing on opposite sides of him a season ago, Kerfoot had dished out a career-high 30 assists in 33 games—the sixth-best ratio in the nation. But there was cause to wonder whether a pair of sophomores, including one who had spent the bulk of his rookie campaign on the fourth line, would enable Kerfoot to produce at the same level.

Not anymore. That fourth-liner, Lewis Zerter-Gossage, has already doubled his goal total from a year ago. And the other second-year forward, Ryan Donato, has lived up to his high expectations, presenting the Crimson’s most dangerous scoring threat. The sophomore duo has combined for 13 goals in 11 games, and Kerfoot has assisted on more than half of them.

“We got off to a little bit of a slow start, but that’s expected when you’re playing with new guys,” Kerfoot said. “I think that as the games have gone on, we’ve figured it out as a line. I’m playing with two really good players again this year, so that’s always nice.”

Factor in the impact Kerfoot has had on the Crimson power play, and it becomes clear why the center from West Vancouver has been as valuable as ever. Kerfoot has grabbed a point on 40 percent of conversions by the Harvard power play, whose 31 percent success rate ranks first in the country.

Two of those points were earned Friday night in the first leg of what proved to be an outstanding road trip for both Kerfoot and the Crimson. Up against No. 19 St. Lawrence, the first-place team in the ECAC, the co-captain not only earned two points on the power play; he had a hand in all four Harvard scores. His two goals and two assists propelled the Crimson to a 4-2 road win.

The four-point showing would have been just the second of his career, that is, if he hadn’t achieved the same impressive feat just six days prior. The center logged a career-best four assists in a 5-2 home victory against Bentley over Thanksgiving break.

But Kerfoot wasn’t done. One night after his outburst against St. Lawrence, the co-captain earned another two helpers in a 7-3 win at Clarkson—solidifying his hold on The Crimson’s Athlete of the Week designation.

“It’s no secret to the coaching staff and the guys in that locker room that Alexander Kerfoot’s a hell of a player,” said Harvard coach Ted Donato ’91 after the win at St. Lawrence. “He plays in every situation, [and] he can really distribute the puck…. He’s certainly been there for us every night.”

Once again, Kerfoot’s name ranks right atop the list of college hockey’s top distributors. His 1.27 assists per game represent the second best rate in the country. Only Adam Fox, the freshman defenseman who works with Kerfoot on Harvard’s top-ranked power play unit, ranks higher.

But perhaps the most impressive element about Kerfoot’s game this year has been something he promised at the season’s outset that he would make a concerted effort to work on—getting his own shot.

Last year, Kerfoot scored four goals in 33 games, and he ranked ninth on the team in shots on goal. This fall, the co-captain has lit the lamp five times in just a third of the time. He also ranks fourth in shots on net.

“It’s a little bit easy to pass when you’re playing with Ryan and Lewis this year, who’ve got great shots and are really good goal-scorers,” Kerfoot said. “But I think just to improve my game in general, I want to be a little bit more aggressive.”

So far, it’s working; Kerfoot has even said it himself. In the slot this weekend, his rocket of a wrister flew by the league’s top goaltender. At No. 7 Boston University, his quick trigger on a breakaway lit the lamp. And working down low against No. 3 Boston College, his quick hands were what set off the siren.

The “playmaker” is making more plays than he ever has before. And Harvard looks all the more dangerous because of it.