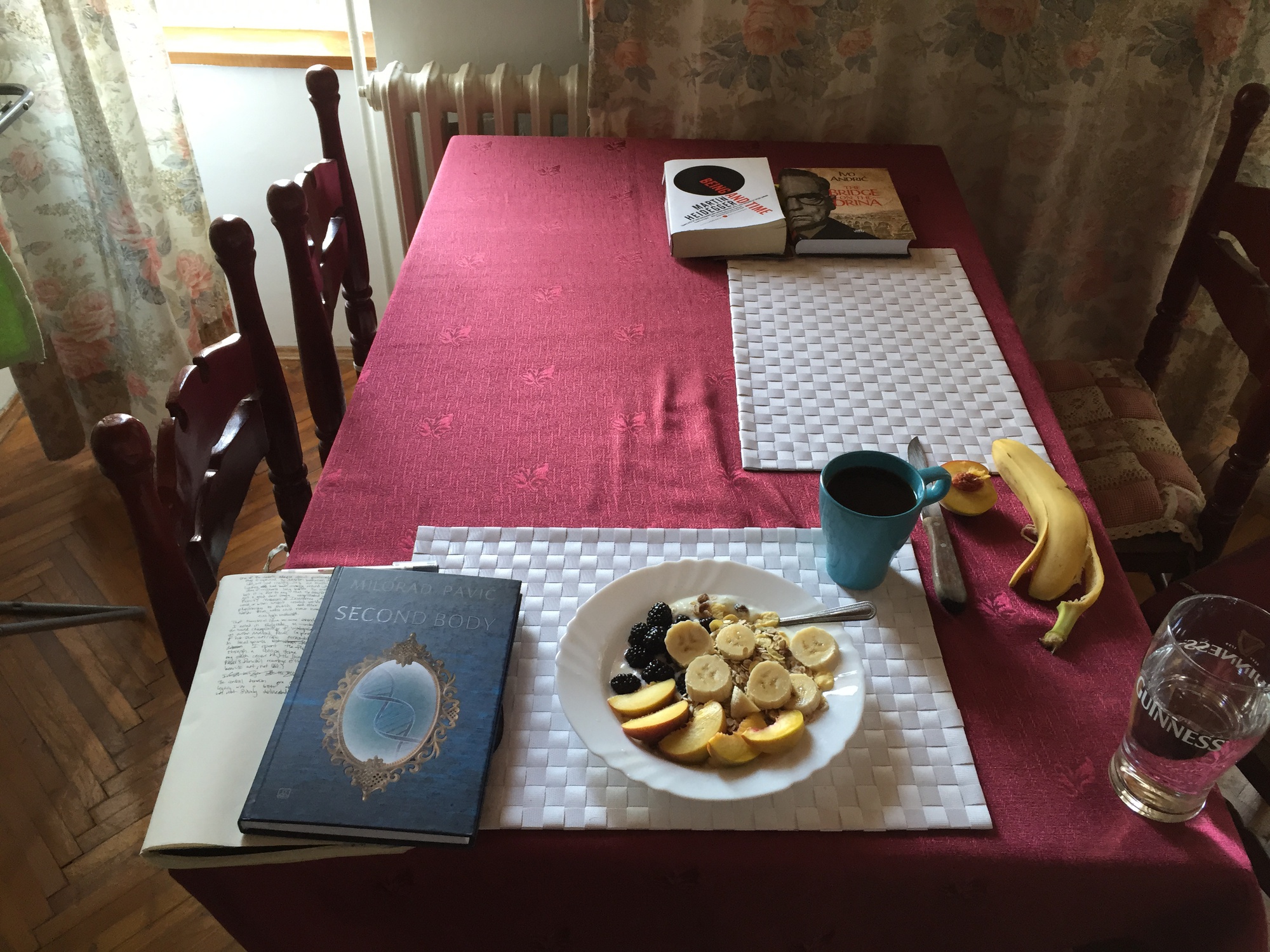 ​Last summer, I spent a month traveling alone, and two catastrophic events took place. In Belgrade I ran out of books—except for Martin Heidegger’s easy-breezy beach-read “Being and Time”—and in Sarajevo I got food poisoning. This meant that I spent my last 72 hours in the Balkans alone in my room, vomiting garlic-soaked lamb’s head, with nothing to do but read Heidegger. This was a terrible experience. But in the weird interplay between being alone and “Being and Time,” I came to understand why it was terrible—and that it might be for a good reason.
By Colton A. Valentine

Last summer, I spent a month traveling alone, and two catastrophic events took place. In Belgrade I ran out of books—except for Martin Heidegger’s easy-breezy beach-read “Being and Time”—and in Sarajevo I got food poisoning. This meant that I spent my last 72 hours in the Balkans alone in my room, vomiting garlic-soaked lamb’s head, with nothing to do but read Heidegger. This was a terrible experience. But in the weird interplay between being alone and “Being and Time,” I came to understand why it was terrible—and that it might be for a good reason. 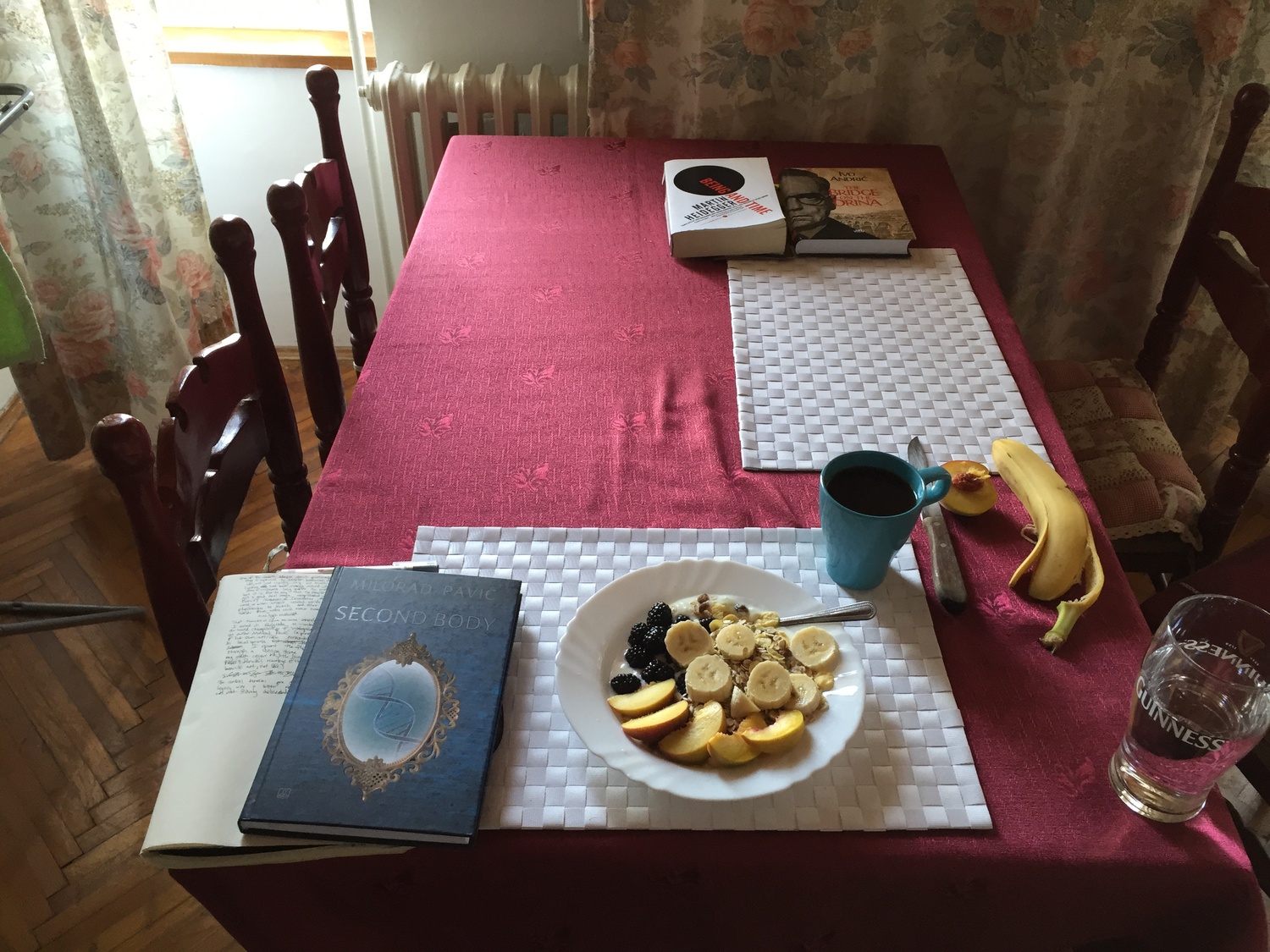 By Colton A. Valentine

That reason requires a bit of background, so bear with me a bit if ontology isn’t your cup of tea. Heidegger was a 20th century German philosopher who believed his predecessors, from Plato to Nietzsche, had all made a fatal error in how they conceptualized the world. They presumed it was composed of distinct entities, entities that existed independently before coming into contact with each other. Heidegger, on the other hand, believed that people and objects were inseparable from their environment and were always co-creating each other. Developing the correct relationship to that co-creation determined whether one’s Being (and Time!) was “authentic” or “inauthentic.”

While in the Balkans, I’d developed a complicated relationship with that authentic-inauthentic binary. Weeks before the lamb’s head was present-in-toilet and ready-to-flush, I was spending a lot of time alone. With little access to home and only sparing interactions with locals, I would often spend days trapped in my head. Eventually, I entered a swirling, detached mental state, somewhere between stoicism and hallucination. Objects that I normally handled fluidly became confusing and fraught. Co-creation did not seem to be working the way that it should. I remember eating polenta one caffeinated morning in Belgrade and being fundamentally unable to tell if it was delicious or rotten—which, looking back, may have contributed to the food poisoning. Sunsets could become miserable, thunderstorms signs of peace. It was as if I could redesign my entire symbolic and emotional relationship with the world. First, it was disorienting. Then, it became frightening.

Heidegger, strangely enough, was a big fan of this mental state. For him, it signaled stepping outside “Das Man”: A social-conditioning force that means, literally, “the man”—as in, I’m getting screwed over by “the man”—but is often translated as the “they” or the “Others.” You can think of Das Man as an average opinion, or as received logic: not the specific objects and people co-creating you in the seminar room, but the larger social phenomenon that positioned you in that college. Heidegger thought that Das Man was the main driver of inauthentic Being. When we bumble along and believe in received logic—e.g., “Sunsets are pretty”—we are not thinking critically about what Das Man’s “idle chatter” is actually saying; about why we value anything we do. Authentic Being had something to do with being alone, with leaving all that chatter behind.

This was all rather validating in a find-yourself-abroad sort of way. But as the August weeks stretched on and I read further into “Being and Time,” my reality was becoming flimsier, not clearer. Sure, lonesome travel hushed that verbose Das Man, but it also pared down the meaning of whatever lay before me. My life’s slow pace allowed expansive looks at my past and future. Instead of just eating the polenta, I’d compare it to porridges I’d had before—and ones I’d soon see—in a mild form of dissociation that could last for hours. It soon became second nature to relativize the present.

That’s where the Time part of “Being and Time” came in. Heidegger believed that those who live authentic and inauthentic existences experienced time differently: Each has its own so-called temporality. Inauthentic temporality occurs when we forget the past, passively await the future, and exist solely in the present. It’s what we have to do to get through our work days, our papers, our midterms. We must forget, await, and exist if we want to be well-functioning members of society. But that also leaves us defenseless against Das Man. When we live only in the present, we naturally accept the average opinion, for we have nothing with which to compare it.

Authentic temporality is just the opposite. It considers the millions of potential futures we may have, the way past experiences have shaped us and our world, and recognizes with intense awareness how those eras coexist to create us, right here and right now. In being active and personal, it sets our trajectory apart from Das Man. By incorporating that principle of co-creation, it avoids that Platonic belief that entities arise in sundered worlds. This sort of Time tends to hit us at major events, like graduations, birthdays, and weddings. In those moments, we remember, we anticipate, and we examine. We can be critical or celebratory; we seem to flirt with transcendence. But if traveling alone let me do this to every bowl of polenta, why was I so miserable?

One reason, I think, is that I was addicted to the idle chatter of Das Man. I craved its social validation and social direction. I wanted to read on Yelp that the polenta tasted good; I wanted a travel guide to assure me how stunning a Danube sunset must be. Heidegger was aware of how trying this process could be. He thought that if one’s angst spiral didn’t involve thoughts of death, it wasn’t working properly. (No one ever said authenticity was cheery!) That’s always been a requisite hurdle to approach authentic Being. I also believe that some things have changed: Recent technological triumphs have fed our natural addiction to idle chatter, letting us fill any moment of lonesome angst with Das Man. It’s scrollable on Facebook, streamable on Netflix. The average opinion is always just a click away. We all used to wake up and go to bed with a good chunk of lonely, authentic temporality. These days, we have to flee to the Balkans.

It’s not just angst that we’re missing out on, though. Like most bad experiences—a workout, an exam, a tough conversation—there’s an endorphin kick at the end of the spiral. Being alone might lead to contemplating death, but it can also induce what Heidegger calls an “Augenblick,” or “moment of vision.” An Augenblick (I read between bathroom runs) does not quite escape Das Man’s world of Facebook scrolls and Netflix streams, but it lets us spot it for what it is. The end-goal is not isolation in a Sarajevo bathroom (thank god). Isolation is only that first step toward a more earnest and intentional relationship to our co-creating comrades. We can never escape social determinism, but we can decide how to treat it.

“Overnight,” Heidegger wrote, “everything that is primordial gets glossed over as something that has long been well known.” I think what he meant here is that the most intense moments, the flashes of authenticity, will always flatten into a narrative as we return to normal life. I finished “Being and Time,” recovered from food poisoning, slowly tuned back into Das Man. But every morning, in the chilled Lowell courtyard, I hope to access that primordial Augenblick. I pause, take a sip of coffee, summon Sarajevo or Housing Day or graduation, and try to fuse past, present, and future into some kind of an authentic temporality. To remember that I will die, that I could have but didn’t, that this is all unique and interconnected, that I am never really alone.