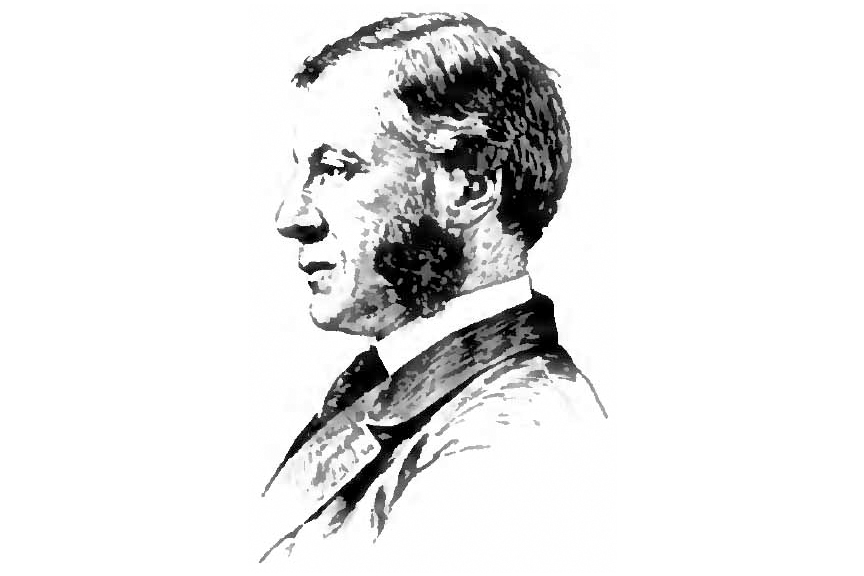 The End of the Tour: Eliot and the American South

One paper in the North questioned whether Eliot had "reached the period of senility." Another suggested that his resignation could not have come soon enough.
By R. Blake Paterson

On a Thursday morning in February of 1909, Charles William Eliot, President of Harvard University, arrived in Memphis, Tenn. His day began with a leisurely tour through the city followed by a mid-day speech at a women’s club, and ended with an evening lecture at the Goodwyn Institute, a public library and auditorium dedicated to talks on education.

“In all parts of the country, there are problems to be solved that would tend to interfere with our advancement,” Eliot declared, according to a reporter from the Memphis Commercial-Appeal. “In the South it is the Negro problem.” For an audience in the early 20th century South, where Jim Crow racial segregation ruled alongside an epidemic of lynchings, there was little controversy in this statement. Eliot elaborated further.

“The same or similar problems exist in all parts of the country. In Protestant Massachusetts, the land of the Pilgrims and Puritans, the population today is mostly Catholic. There are Irish, Italian, and Portuguese that present the same race problem to that part of the country the Negroes do to the South,” Eliot continued. This statement alone unleashed a series of virulent responses from newspapers across the Northeast.

Tennessee seems an unusual place for Eliot, a 75-year-old Boston Brahmin at the heart of northern intellectualism, but Memphis constituted only one of over two dozen southern cities the Harvard president visited in his nearly seven week University-sponsored tour of the South.

Months prior to this moment, on Oct. 26, 1908, Eliot had submitted his resignation from the Presidency to the Harvard Corporation. Over the course of nearly four decades, Eliot transformed Harvard from a provincial religious institution into a preeminent American research university. He reorganized the professional schools, increased academic scholarship, raised the endowment, and created an elective system of education. He asked that his resignation take effect no later than May 19, 1909, making his trip to the South the capstone of the longest and perhaps most consequential presidency in Harvard’s history.

In Eliot’s mind, the role of President stretched far beyond Cambridge city limits. In a speech near the end of his tour, in Durham, N.C., Eliot made this point clear. “Of course Harvard University aspires to a national resort, to draw students from all over the country,” he said. “It is therefore the business of her President to inform himself about the condition of the institutions of higher education in all parts of the country.” For Eliot, going to the South was an educational experience in itself. As the Harvard Bulletin released to the press explains, “he goes to observe, to study, to learn, and to help, if his help is needed and asked for.”

Despite Eliot’s universalizing rhetoric on his place in society, fundamental to the understanding of this trip is Eliot’s identity as an outsider. The Harvard Bulletin attempted to minimize this status by stating that Eliot “goes to the South, not primarily as a New Englander or as a Harvard man, but as one of the foremost citizens of America, devoted to the cause of education, and to the many complex problems of the American people.”

The controversies that surfaced throughout the trip on issues ranging across politics, education, and race provide a snapshot of Southern society as it looked more than four decades after the Civil War. They also form a portrait of Eliot, revealing his priorities as he stumbled through unfamiliar terrain.

Two weeks after Eliot’s lecture in Memphis, newspaper accounts of the racially charged remarks began to stir backlash. Unaware the imminent controversy, Eliot had already traveled through six other Texan cities and was in residence in New Orleans, La. Eliot’s assistant, Joseph Warren, was telegraphed asking for verification of the quote. Warren confirmed that Eliot had drawn parallels between racial issues in North and South and “did not deny the quotation.”

Meanwhile, northern angst over the alleged statement mounted. On Mar. 6, a Boston newspaper printed an article charging Eliot with “talking altogether too much on every subject.” The paper asserted that Eliot had proven himself “a man who lacks the caution and reserve which denote the sober and well-balanced mind.”

In response, Eliot sent a telegram to Boston. In the brief message, Eliot claimed that he was quoted inaccurately, and that he had actually said, “North and West have their racial suffrage difficulties similar to, though not so intense as, those existing in South.” He included that he was “happy to reply on return if any public interest therein remains.” Only a few days later, after visiting Montgomery, Ala., Eliot again attracted controversy over his statements on race.

Eliot’s stay in Montgomery was short, but while there he sat down for an interview with a reporter. In the interview, Eliot veered back into questions of race, this time addressing intermarriage.

“Each race should maintain its own individuality,” he said. “The experience of civilization shows that racial stocks are never mixed with profit and that such unions do not bring forth the best and strongest children.” Eliot expanded on this by referencing specific racial groups. “I believe, for example, that the Irish should not intermarry with the Americans of English descent; that the Germans should not marry the Italians; that the Jews should not marry the French.”

Only days after he had calmed the outrage from his statements in Memphis, Eliot was thrust back into public scandal. One paper in the North questioned whether Eliot had “reached the period of senility.” Another suggested that his resignation could not have come soon enough. As with the first incident, the time between the interview and its dissemination was delayed. Once again unaware of the developing controversy, Eliot continued across the South, to Birmingham, Tuscaloosa, and then on a three-day train ride to Atlanta.

After arriving in Atlanta and receiving word about the controversy, Eliot sent a much longer clarifying telegram to Boston. In a Mar. 14 statement, Eliot denied any bigotry toward the Irish in Boston, one group targeted in his statements. “Nobody familiar with the political history of Boston could fail to have deep appreciation of many good influences which Americans of Irish descent have had in our political development,” the telegram read.

In an attempt to show goodwill toward the Irish, Eliot explained that he had authored the inscription for a monument in honor of Patrick Collins, a former Irish mayor of Boston. With regard to the admixture of races, Eliot opted for toning down his language rather than outright recanting. Eliot explained that over time, the mixture of races would blend into one American race. “This blending will be the effect not of rapid amalgamation but of the gradual diminution of differences through the effect of common education and common conditions in national industry and through governmental policies and practices,” he wrote. The pace of this mixture was his chief concern, he said. “That kind of assimilation will preserve the best qualities of all races, some of which might easily be lost by a sudden blend.”

Ironically, on Mar. 13., the day before Eliot sent out the telegram, he spoke at Atlanta University upon the invitation of W.E.B Du Bois. The first African American to receive a doctorate from Harvard, Du Bois served as an esteemed member of the faculty at Atlanta University. The title of Eliot’s speech was “Development of the Negro,” and in his address to students and teachers, Eliot described two attributes of civilized men that were particularly important for that development. The first was “the disposition to go without present gratifications in order to obtain the means of future, more substantial satisfactions.” The second was “the ability to work steadily, day after day, month after month, year after year.”

The irony of Eliot’s presence was not lost on those at Atlanta University. But Edward Ware, the school’s president, took a conciliatory tone, opting to criticize newspapers for what was seen as faulty journalism in publishing “misleading accounts of President Eliot’s allusions to the race problem.” It is difficult to reconcile this apologist stance when, nearly a week later in Asheville, N.C., Eliot was quoted again discussing the negative implications of intermarriage, saying, “the history of civilization shows that wherever the blood is intermingled, the offspring is less strong. There would be fewer weak individuals were there no intermarriages.”

Eliot left Atlanta and continued through South Carolina, North Carolina, and Virginia, before returning to Cambridge. During those seven weeks, Eliot’s comments betrayed a man shaped by the bitter racial tensions of his times. The similarities in the views Eliot expressed to those held by Southerners reveal the racial divides that were endemic to North and South. Ironically, this aligned with the purpose of the trip as explained in the Harvard Bulletin, which stated that “the sojourn of… President Eliot in the South will do much to make this community of interest begun years ago, closer and definitely lasting.”

While Eliot did gain a new understanding of the South with regard to education and municipal government, the greatest lasting legacy of his trip remains the controversy surrounding views Eliot espoused regarding race in the North. Even as he frantically telegraphed Boston to repair his image, Eliot continued to damage his record with racist missteps. The trip to the South had been a clumsy, downward slide into increasingly unpopular opinions.

If Eliot saw a problem with the mixing of races, he deferred it to future generations. In a letter written on May 5, 1909, directly following his trip to the South, Eliot wrote, “As to the most expedient treatment of colored people who are removed by four or five generations from Africa or slavery, I am in favor of leaving that problem to the people of a hundred years hence.”