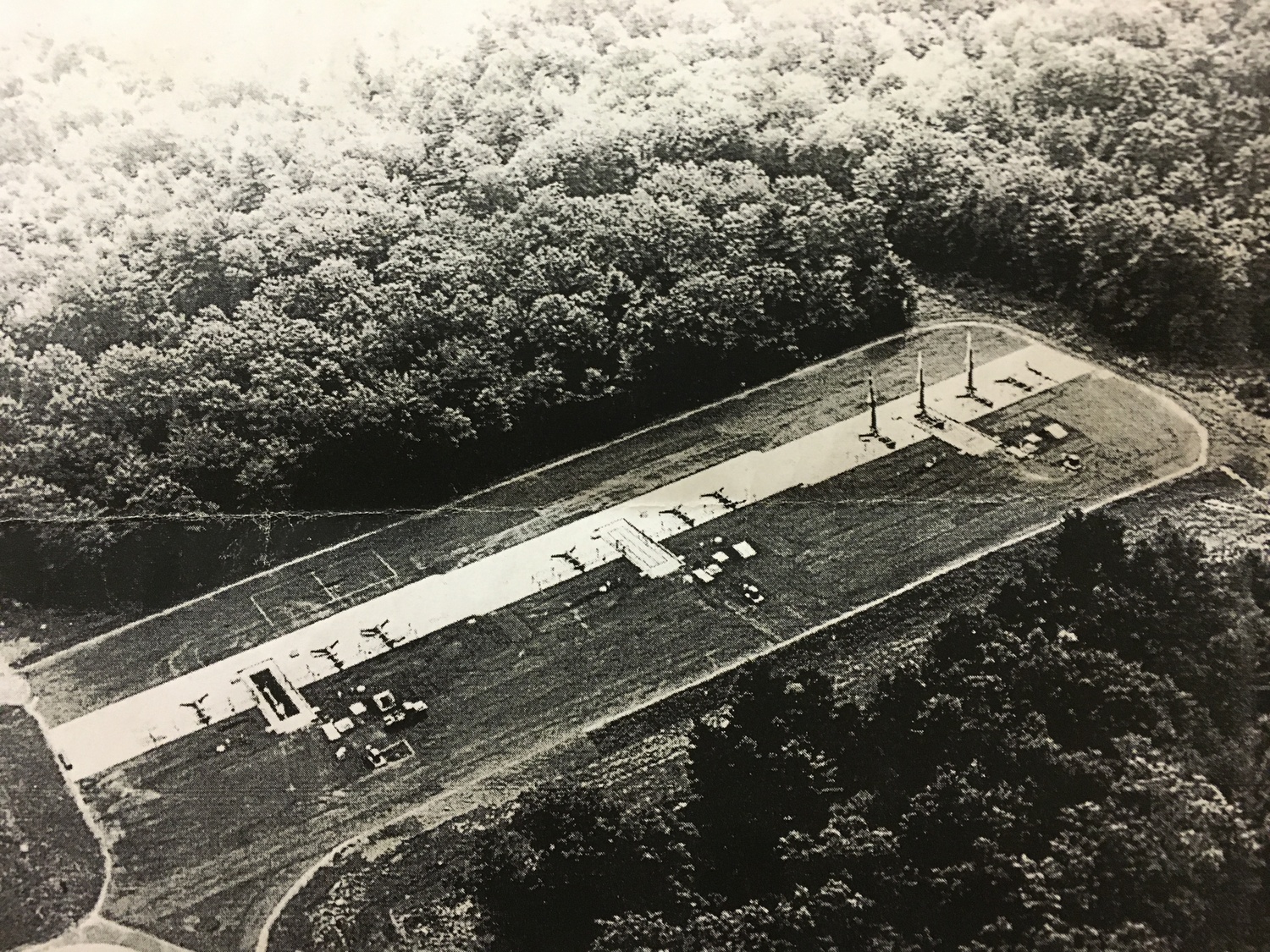 This facility used to store Cold War missiles.
By Nathan A. Cummings

Sixteen miles from Harvard Yard, the woods outside Bedford, Mass. are still and leafless. As I step out of the car, a light snowfall blows over three small concrete buildings and some chain link animal pens. I’ve hitched a ride to Harvard’s Concord Field Station, which at first glance seems like an unlikely match for what NPR described in 2011 as “the coolest lab in the world.”

Yet there’s more to Concord than meets the eye. Inside its walls, Biology Professor Andrew A. Biewener supervises groundbreaking experiments in comparative biomechanics, using an assortment of lab animals from around the world. And below its surface, the Museum of Comparative Zoology stores its oversized items in bunkers formerly used to house Nike missiles during the Cold War.

It’s a lot to manage for one small Harvard outpost. But the atmosphere at Concord remains fairly laid-back. For one thing, it’s a lot easier to find parking here than in the Square. “I leave my keys in the car,” Biewener says as we walk across the grounds, followed by his black Labrador, Sadie. “It’s a safe place here.” He’s worked at Concord since 1999 and has seen the station change in many ways. The sense of calm, though, as been a constant.

Biewener, who co-teaches Life Sciences 2: “Evolutionary Human Physiology and Anatomy” when he’s not at Concord, is an expert in animal locomotion. His research focuses on animals’ neuromuscular function as they move through their environments, from land to water to air. Studying these processes requires some unconventional lab equipment, such as the massive wind tunnel housed in one of Concord’s buildings. It’s essentially an “air treadmill” for birds, and allows Biewener to study their motion from multiple angles as they fly in place. “The resources here are pretty unique,” he tells me. “I’m one of the few people that can actually study animal flight along with terrestrial locomotion.”

These resources include the animals themselves. Besides the birds, Concord has also housed kangaroos, chimpanzees, horses, lion cubs, and antelope in its 40-year history of animal physiology studies. Many of these animals have been trained to run on another of the lab’s unique features, a custom-built treadmill from 1972 that is still in use today. Inside, Biewener introduces me to the lab’s jerboas: tiny, hyperactive desert rodents housed in cages variously labelled “CRAZY, “BITEY,” “INBRED” and “SAVE BRAIN FOR HILLERY METZ.” Sadie eyes one with a hungry expression. An elderly emu outside is left over from a previous P.h.D’s experiments, and hasn’t been used for science in years. “We just keep him around,” says Biewener. “I pay for him out of supplemental funds.” 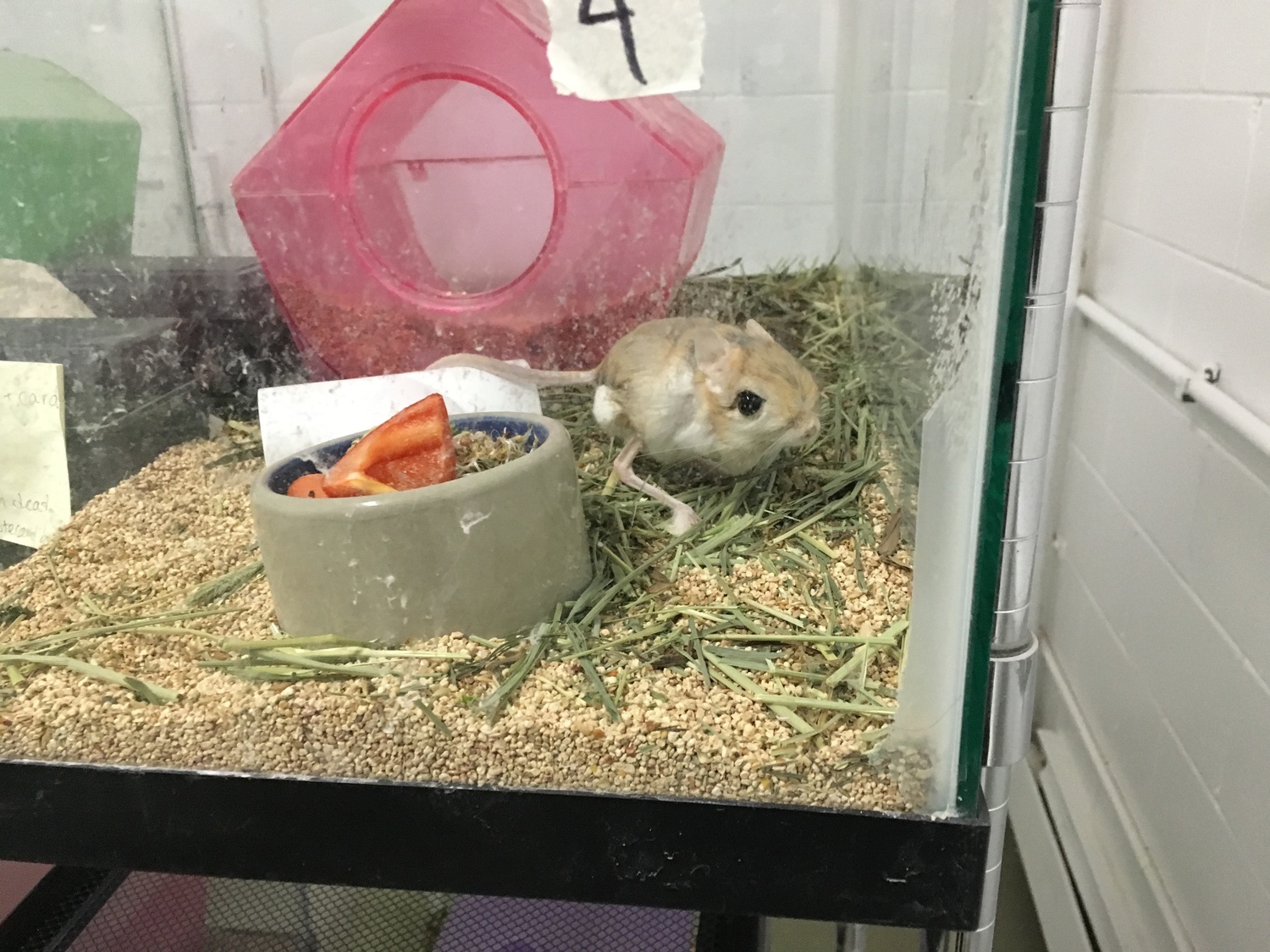 A jerboa from Professor Andrew A. Biewener's lab By Nathan A. Cummings

He’s not the biggest leftover housed at Concord, though. Underneath the wind tunnel, Biewener escorts me into a cool, dusty chamber lined with countless wooden shelves holding huge bones. This is the bulk of the MCZ’s cetacean collection, housing almost all of its whale and dolphin specimens. Standing among them is eerie: I’m dwarfed by many of the skulls, which are easily twice my height, as they lean haphazardly against the wall. Here, too, the legacy of Concord’s past is most visible. Biewener directs my attention to a series of hinges lining the ceiling. In the 1950s, these would have allowed surface-to-air Nike missiles to be raised from this bunker in case of aircraft attack. Biewener doesn’t mention, though, what I’m wondering: Does the mechanism still work? 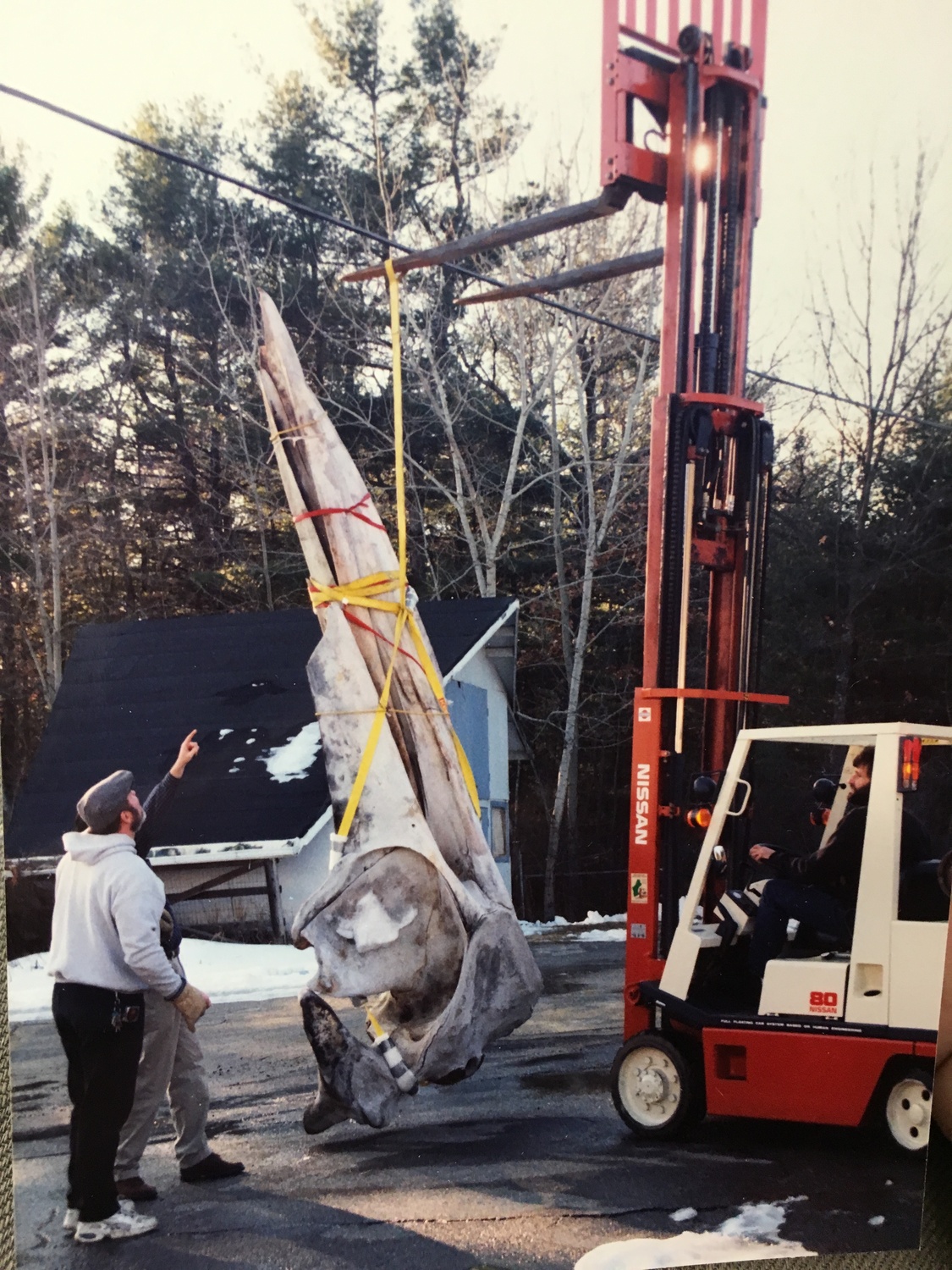 A whale skull being prepared for storage at Concord in the late 1990s. By Courtesy of Andrew A. Biewener

It’s chilly down in the bunker. According to Linda Ford, Director of Collections Operations at the MCZ, this is a serious issue.

“For proper storage of specimens, especially skeletal, you need well-monitored temperature and humidity ranges,” she tells me in a separate interview. “Being in a bunker, there is no temperature or humidity control.” Without it, the rigid whale bones will start to degrade.

When the MCZ relocated its whale collection to Concord in the mid-1980s, she elaborates, these best practices for collection storage didn’t exist. Now, though, there isn’t enough room to house the specimens in the MCZ’s new climate-controlled storage space under Northwest Labs. Harvard’s whales and other oversized items, including samples from historically famous coral reefs, will remain where they have stayed for over 30 years—slowly disintegrating below the ground.

The current solution, Ford says, is to upgrade the bunker, adding better storage features in an attempt to preserve a portion of the collection there. “Anything you can do will buy you time,” she says. “Part of our mission is to take care of these specimens for research.”

It’s worth questioning why these upgrades have been so late in coming. Given its isolation, Concord seems liable to slip out of sight and out of mind for those spending most of their time on campus. It’s one of Harvard’s many far-flung possessions, from the Harvard Forest to Oak Ridge Observatory, dutifully maintained but often forgotten amidst the hustle and bustle of life in Cambridge.

This hasn’t always been the case: According to Biewener, “up until about 10 years ago, there was a pretty steady involvement of undergraduates doing research projects out here.” Then he switched from teaching a course on vertebrate anatomy and physiology to LS2, where students are more interested in studying humans than jerboas or emus. These days, the station has only three regular undergraduate visitors, who work paid positions as part of Biewener’s team.

Unlike Ford, Biewener isn’t concerned about physically upgrading his portion of Concord. Rather, he’d like the station to host more research programs beside his own. “The real renovation needs,” he says, “aren’t so much the facilities themselves. It’s more to have the investment in intellectual activity out here.”

Whether or not it gets this investment, Concord is unquestionably unique, even among Harvard’s secluded outposts. It’s a relic of the Cold War, reconquered by the natural world as a repository of invaluable knowledge.

As for the bunker’s missile doors? I finally ask Biewener before I leave, and he chuckles. “Those don’t work anymore,” he says. “They’re just ancient history.” 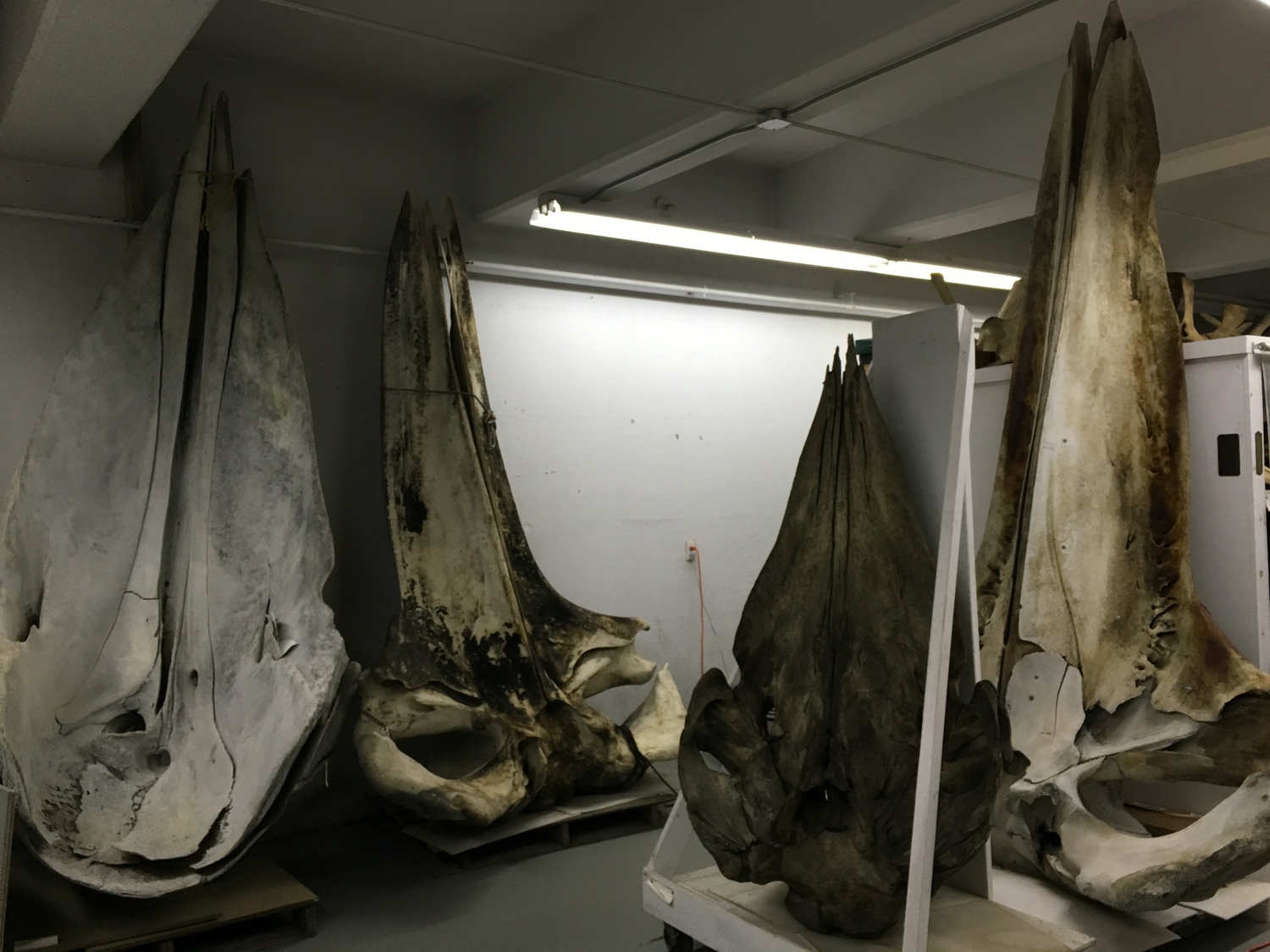