After Shaky Past, Harvard’s Grip on Hard Alcohol Could Tighten

Harvard, like many colleges, has a troubled history with hard alcohol. Now, after the release of a University-wide sexual assault prevention report, the College again has returned to the debate.
By Jalin P. Cunningham and Ignacio Sabate 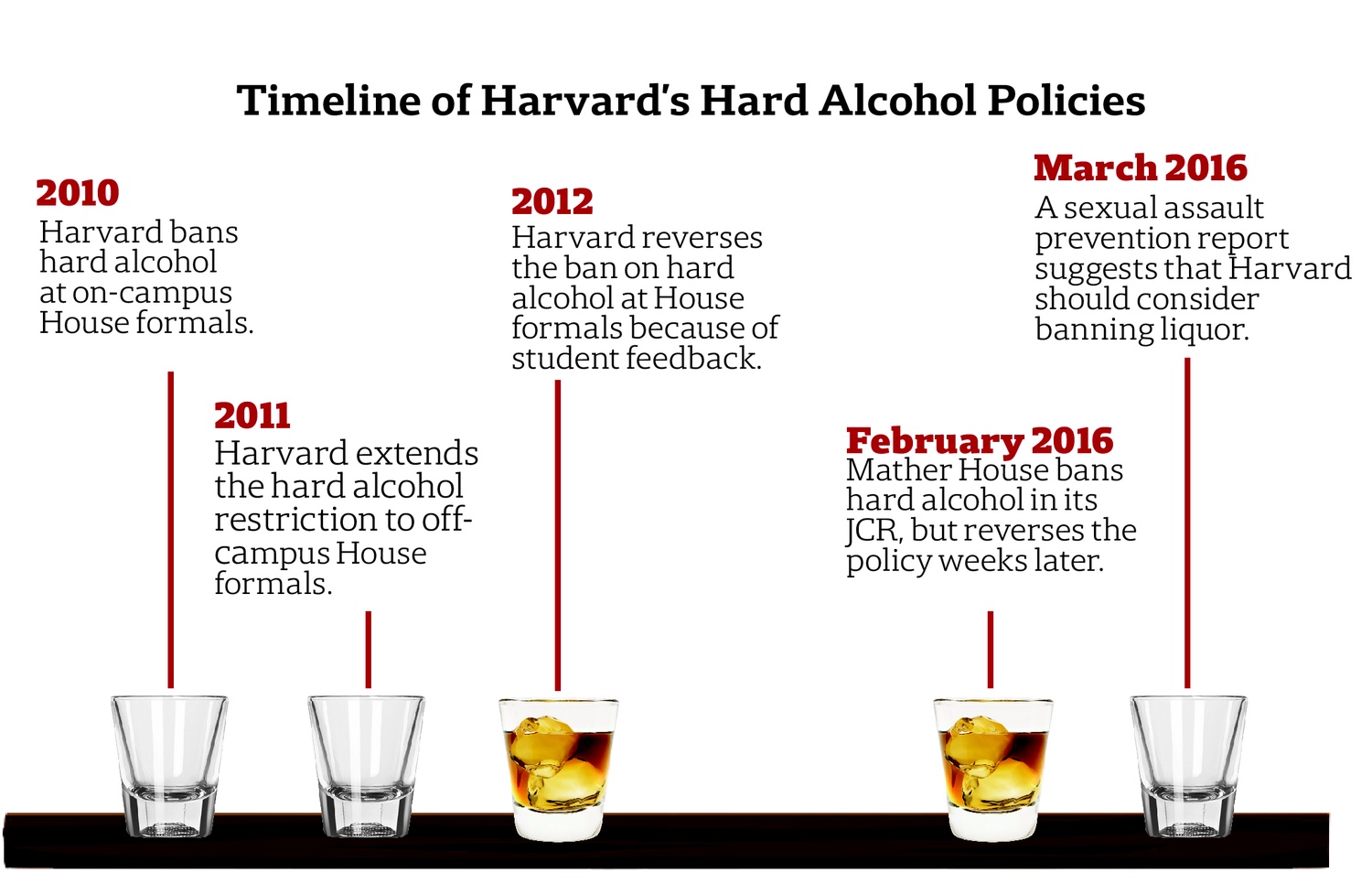 This article is the third in a series about sexual assault prevention at Harvard. The first part can be found here, and the second part here.

Harvard, like many colleges, has a troubled history with hard alcohol.

Over the past six years, the College has wavered back and forth on whether to allow liquor at some campus events, creating new policies and, at times, revoking them soon after. In 2010, the College banned hard alcohol at on-campus House formals, extending that ban to formals outside of Harvard’s gates a year later. In spring 2012, though, Harvard overhauled its alcohol policies to enforce greater regulation of overconsumption College-wide, but at the same time reversed its rules on liquor at formals.

Now, after the release of a University-wide sexual assault prevention report, Harvard again has returned to the debate. Stating that “One cannot uncouple the role of alcohol and sexual assault,” the report suggests that a campus-wide restriction on hard alcohol could be on the horizon.

The report stated, “Penalties worth studying need not be draconian—the goal is to bias drinking away from its most dangerous forms”

Indeed, former University Provost and Steven E. Hyman—who chaired the sexual assault prevention task force—noted in a report last fall that alcohol is a “potent” risk factor for sexual assault. In the report, which accompanied the results to a University-wide survey on sexual assault at Harvard, more than 60 percent of surveyed respondents who indicated they had been assaulted by force said that the incident involved alcohol.

Beyond considering a campus ban on hard alcohol, the sexual assault prevention report suggests that students undergo additional and more rigorous education on safe drinking habits, and that the College create alternative events on campus for undergraduates that do not involve alcohol, thus mitigating potential risks for sexual assault.

In response, College administrators said they did not expect Dartmouth’s new policy to have much effect on Harvard, citing a “different ethos” between the Cambridge and Hanover campuses.

But now, with a similar move proposed in the report, liquor consumption at the College could become a practice of the past.

Hyman said that, although implementation of a policy similar to Dartmouth’s is unlikely, Harvard could still draw lessons from the ban.

“We’re different. We’re a different kind of place,” Hyman said. “I don’t believe that we can just take things away.”

“We can probably still learn something from their experiment,” he added.

For students, a potential hard alcohol ban could be counterproductive and possibly encourage students to socialize at off-campus venues, which the report cites as a potential aggravator of sexual violence. Earlier this semester, staff in Mather House banned hard alcohol consumption in the House’s Junior Common Room, a measure students criticized for its lack of student input and potential to encourage more intense pre-gaming. Just weeks after establishing the policy, administrators eventually called it off.

Al B. Corvah ’18, one of Mather’s Undergraduate Council representatives, said in seeking to prevent sexual assault at the College “outright banning [hard alcohol] would only lead to more smuggling, more concern.” During the short lived ban in Mather’s JCR, Corvah said students snuck hard alcohol to into the House to bypass the policy.

“What's going to end up happening is that more and more people are going to host social events that are unrecognized on campus, and that in turn encourages further bad behavior,” he said.

Additionally, and more broadly, the report recommends that students and staff across the College receive education on the relationship between drinking and sexual assault. The report recommends that annual student trainings include information on safe drinking procedures, and that streamlined party registration procedures throughout the Houses require party hosts to learn about safe drinking.