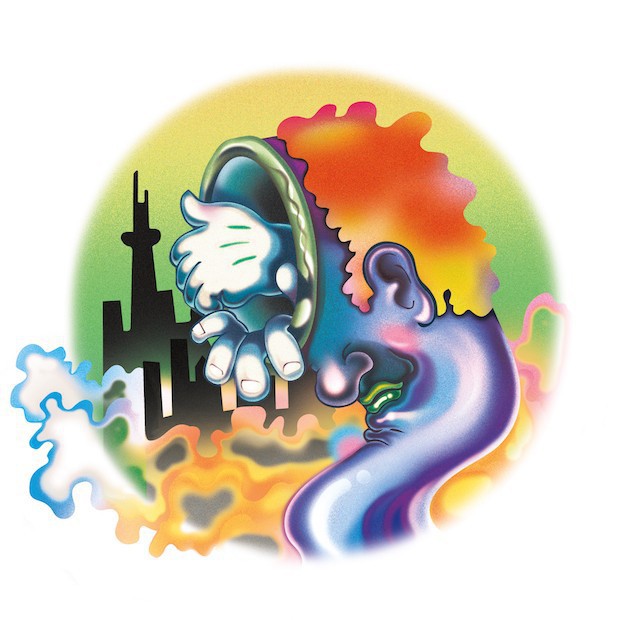 “You want it? / Why don’t you look out the window,” snarls Guerilla Toss’s lead singer Kassie Carlson in “Multibeast TV,” the opening track to the group’s latest album, “Eraser Stargazer.” From that jarring beginning onward, the noise punk unit immediately sets itself up for half an hour of explosive, discordant content. With an altered lineup and a new label (the New York-based DFA Records), the band deliver on this promise, producing more of their signature riotously eclectic music, albeit more professionally—the skronky synths, guttural vocals, and cowbell cameos are certainly cleaner. Indeed, “Eraser Stargazer” evokes the spirit of groovy, experimental rock that defines the group but does so with a certain restraint that lends unexpected vibrancy and eccentricity to their sound.

True to its title, “Eraser Stargazer” is Guerilla Toss’s dreamiest production to date. The five-piece’s debut LP, “Gay Disco,” was danceable, filled to the brim with unwieldy energy and ready-made for play at a hip, avant-garde discotheque. In comparison, “Eraser Stargazer” is more muted and controlled—almost minimalist, if such a descriptor can be applied to an album dominated by unruly vocals and a healthy serving of distorted instruments as a guiding force. Take, for example, “Perfume,” a track characterized by repetition in both rhythm and lyrics. “It could be like / It could be like / A perfume / After an idea / Is absent,” Carlson says, her words marching to the beat of the shrill, reverberating guitar strums and rolling drums. This orchestration repeats several times during the song’s four minutes, broken up only when Carlson’s voice melds with the disco-infused beat via a series of shrieking, cooing sounds and unintelligible speak-song.

This obsession with reiteration is not novel for Guerilla Toss. For instance, in “Operate” of “Gay Disco,” Carlson similarly relies on a limited, repetitive set of lyrics, but the track also features shifts in tempo and words that are unpredictable, swift, bewildering. “Perfume” is different in its circularity; fewer surprises exist, so that when Carlson shouts “To stop / Arrest” for the second time, the utterance comes as no shock. That is not to say that “Perfume” is stale or spiritless. While not spontaneous in its composition, the song remains infectious and dynamic—an anthem for art-punk aficionados, with its blend of rallying cadence and pulsing repetition.

In fact, the songs of “Eraser Stargazer” each contain an unceasing motif, a rhythmic thread that lends cohesion. For instance, “Color Picture” has its driving, ever-present drums and sliding keyboard synths, while the semi-eponymous “Eraser Stargazer Forever” relies on rattling chimes and intense distortion. And “Doll Face on the Calico Highway,” the most tempered track on the album, is a hazy, otherworldly product, in which Carlson sheds her shrill intonations for a husky serenade that recalls spoken word. Juxtaposed against her self-assertive flair in earlier tracks, the vocals of “Doll Face” feel stripped down, and the effect is a haunting finish—one in which the toned-down mood of the album rings more prominent.

Despite the decreased level of haphazardness in the music, “Eraser Stargazer” is not an album for the passive listener. Guerilla Toss remain committed to the discordant melodies of its previous releases, and their latest album demands full attention for the audience to appreciate the medley of instruments, unique sounds, and vocalizations. Even the shortest track on the album, “Multibeast TV,” presents a cacophonous mix of bells, dysmorphic beats, and ethereal, funky synths. In that way, “Eraser Stargazer” posits an intriguing paradox for Guerilla Toss—one in which the band continues to guarantee an in-your-face, head-banger sort of deal while delivering a coherence unprecedented in their earlier works.

What does this change mean for the noise-funk quintet? Is it an indication of evolution for the band? Faced with the album’s intricate, often indecipherable orchestration, one may never reach a clear answer, but the album doesn’t demand a response. Instead, sit back, relax, and listen. “Eraser Stargazer” is a wild ride, and a nebulous one at that.

“Eraser Stargazer” is out March 4 via DFA Records.

—Staff writer Ha D.H. Le can be reached at ha.le@thecrimson.com.