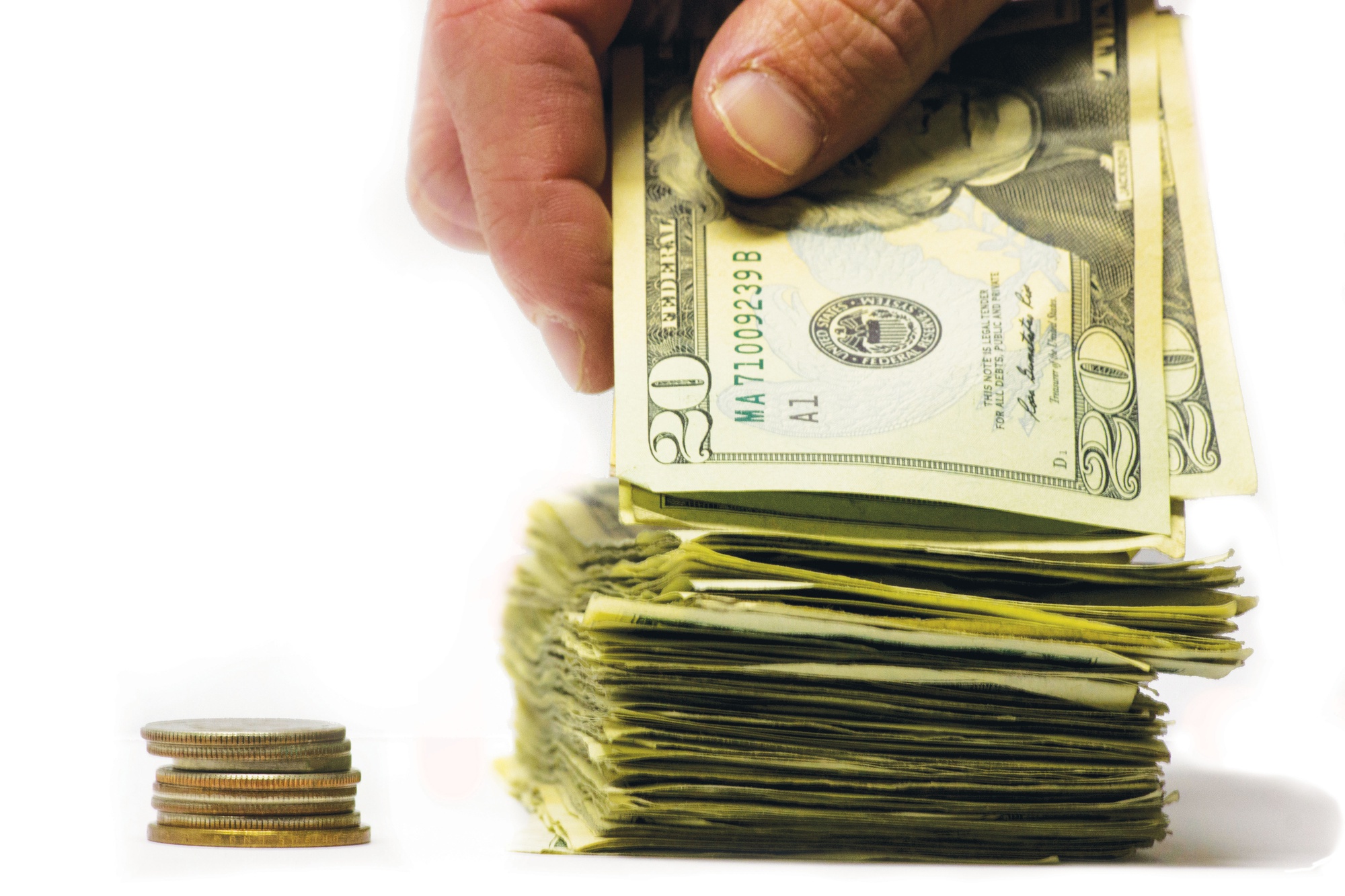 Two people, she says, are stuck on a desert island. One of them starts panicking, but the other one is completely calm. So the panicked one turns to the calm one and asks: “Why are you so relaxed?”

The calm one, as Rogers tells it, says, “I went to Harvard. The development office will find me wherever I am.”

Harvard’s most recent fundraising drive is no exception.

The University publicly launched its “One Harvard” capital campaign in 2013, the first fundraising drive to encompass each of Harvard’s 12 schools. The worst of 2008’s financial crisis largely behind it, the University set its sights high. It would aim to bring in $6.5 billion, more than any other higher education institution had ever raised in one fundraising drive before. 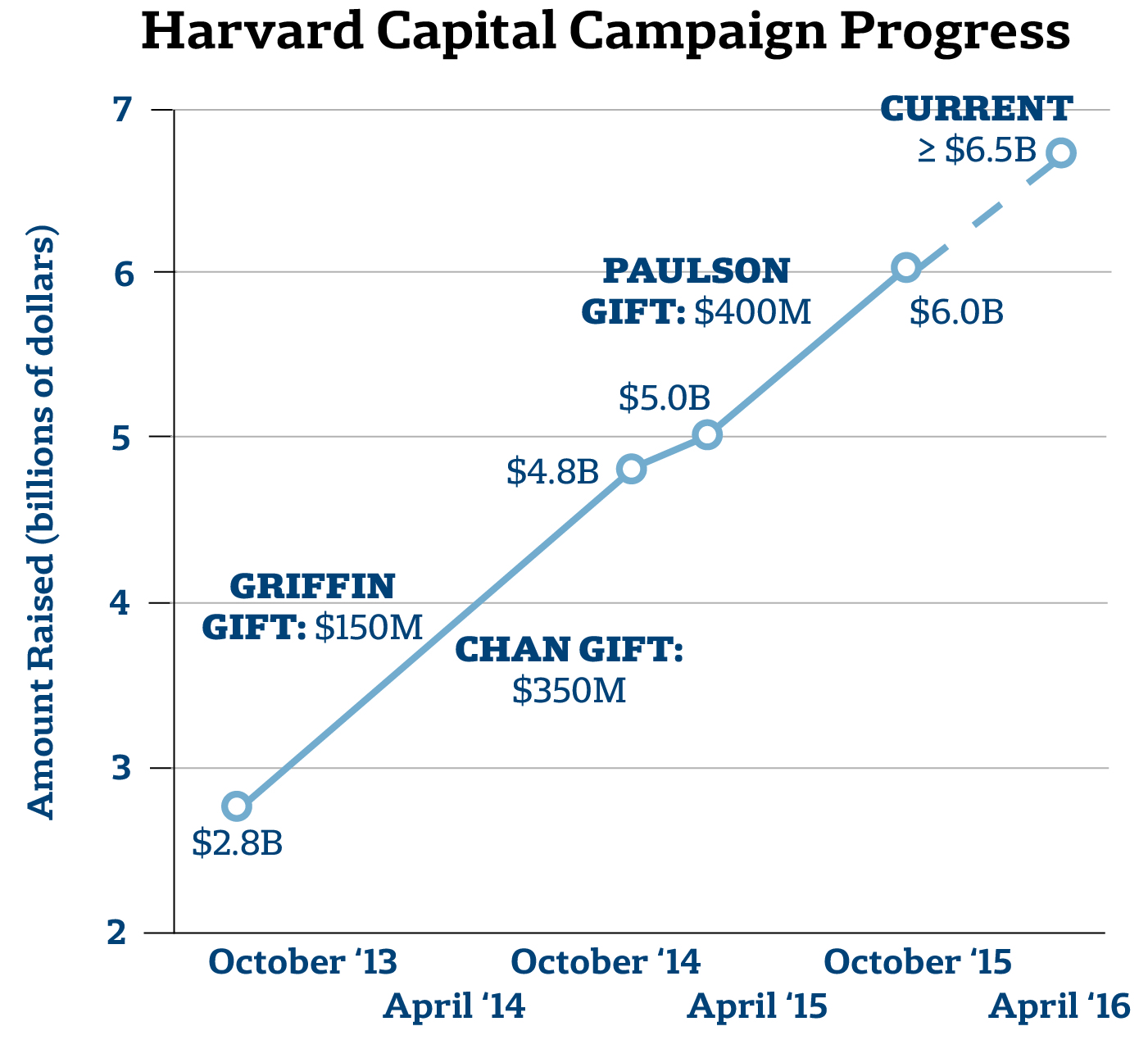 Now, less than halfway through the public portion of that fundraising effort, Harvard has already surpassed its overall goal. With about two years left in its drive, Harvard’s fundraising officials are now focusing their energies on raising money for still-unfilled “buckets” of need, instead of raising the overall goal.

But that’s easier said than done. Putting billions in the right place and towards the right priorities can be another matter altogether. Many of the most generous alumni come to the University with interests of their own—interests that don’t always align with Harvard’s fundraising priorities.

Rogers’s joke about finding donors on desert islands seems more relevant than ever. With two years left in the campaign, the perpetual dance between the donor and the University has become all the more complex, as Harvard must increasingly tailor the money it receives to its institutional priorities.

To hear University President Drew G. Faust explain it, fundraising is somewhat like matchmaking. Donors have their interests, Harvard its own, and Faust works to design gifts that will that satisfy both parties.

“We don’t pick money out of people’s pockets,” Faust said. “Whatever gets funded, it’s because someone has decided they want to do this, so we want to find something that makes them feel great about their philanthropy but also advances the purposes of the institution.”

A capital campaign is a time for a university to articulate those institutional purposes, defining a vision for its future. Once the campaign starts, the school must energize donors about those priorities.

But as the initial excitement of the campaign fades and the most glamorous priorities receive funding, Harvard faces the uphill battle of filling in what some may consider less-enticing gaps.

“Some things are easier to raise for than others. Once you’ve raised what you’re going to spend on something and you try to steer people in another direction, they may or may not be open to being steered,” said Frederick M. Hess, the director of education policy studies at the American Enterprise Institute, a conservative think tank.

Many of the campaign’s largest priorities, including House renewal and the new science and engineering complex in Allston, are among those that still need the money. But at the same time, many of Harvard’s most enthusiastic alumni have already come forward and the campaign’s largest donations are likely behind it, according to several donors involved in fundraising efforts, including Paul J. Zofnass ’69 and Gerald R. Jordan ’61.

Some fundraising priorities are generally more appealing to donors than others. For example, because Harvard likely won’t rename undergraduate Houses anytime soon, Jordan said it can be hard to attract large gifts for House renewal.

“Everybody loves to donate an endowed professorship, but I suspect we’re running out of professors to be endowed,” Jordan said.

When the University has to raise money for the targeted priorities, fundraising—an already complicated task—becomes even more intricate.

“While many supporters of Harvard will rally to the goals that have been established, there are others that have strong preferences of their own and unless those preferences are inappropriate in themselves, then Harvard should be happy to have those funds,” Peter L. Malkin ’55, a major donor, said. “It means Harvard has its work cut out for it to encourage people to give where it thinks the needs are.”

Coaxing donors to fund a University priority is a complicated dance; Harvard must respect the wishes of donors while also pushing its institutional priorities.

Paul A. Buttenwieser ’60, a member of the Boston Campaign Committee, has his own saying about Harvard fundraising.

“The one phrase that a lot of us like to use is, ‘We don’t give to Harvard. We give through Harvard,’” Buttenweiser, who was a Crimson editor, said.

With 12 schools, thousands of professors, and countless research projects happening at the University, it’s fairly easy for donors to find a program that they want to support.

“Harvard is so big and so vast that if you’re interested in a certain area, there’s always something that needs money,” Mitchell L. Dong ’75 said.

In philanthropy, those giving the money ultimately hold the cards, Zofnass, who is a major Harvard benefactor, said. While Harvard consistently tries to funnel small-time donors towards unrestricted gift funds, for the bigger benefactors, the University is more willing to compromise.

While not every donation is earmarked perfectly to Harvard’s priorities, Zofnass said, “the alternative is not to give anything, and that’s not efficient either.”

“You need to get someone to write the check,” Zofnass said.

When Dean of the Law School Martha L. Minow initially asked Michael R. Klein to donate to a specific program for the Law School’s $305 million capital campaign, for example, he declined. Instead, Klein elected to give $15 million to the Berkman Center for Internet and Society, which will be renamed the Berkman-Klein Center.

“Frankly, this is something I had decided to do rather than things they suggested,” Klein said.

As in Klein’s case, the autonomy large donors enjoy means that some gifts go towards programs outside Harvard’s typical fundraising dossier. In April, the Lee Kum Kee family—whose ancestor invented oyster sauce in 1888—gave $21 million to the Harvard School of Public Health to establish the Lee Kum Sheung Center for Health and Happiness. The center’s initial efforts will include constructing a “happiness index” and studying the effects of social media on mood.

“That was an interesting example, because the donors had a clear notion of happiness as a focus,” Faust said of the gift. “It kind of congealed around a shared set of goals that emerged as plausible ones for a gift.”

A potential donor with a narrow pet project in mind might be encouraged to broaden the scope of their gift, or a benefactor interested in an already-filled “bucket” might be redirected to an area of greater need, Faust said.

“Someone may say to you, ‘I want to give a professorship in 19th-century German poetry,’ and I would likely say to that person, ‘Can we broaden that a bit?” Faust said.

But a request like Faust’s—to broaden the nature of a gift—does not always appease both sides. Harvard may be able to redirect small-time donors towards unrestricted or general gifts, but with the larger donors, Zofnass said, Harvard’s hands can sometimes be tied.

“On my gift for the trees, I think the trees are very important. I think the education it provides is very important, but that’s me,” said Zofnass, an environmentalist who funded a tree walking path in New York City’s Central Park. “I have to believe that there’s somebody who says, ‘You know that’s a really nice idea, but that’s not what we need right now, can you convince him or her to do something else with it?’”

“But the answer for big gifts will probably be no,” Zofnass added. “If the gift is large enough, the University will do anything it can to make it happen.”

Still, aside from Harvard’s banner priorities, donors have found plenty of niche buckets to fill.

And at the Law School, a gift of an undisclosed amount from hedge fund manager Mitchell R. Julis created a program in Jewish and Israeli law last November. Julis, in a press release, said his family’s Jewish heritage partially motivated his donation.

“I don’t believe I’ve come across a situation where a donor wanted to give money and we didn’t need it,” Garber said. “The more common issue is we may have something that's a very high priority, something where there’s an urgent need, and the donors are less interested in that area than in another area where we already have pretty good funding.”

To be sure, Harvard will try to direct donors away from gifts that would significantly depart from the University’s goals. And sometimes, with concerted effort, fundraisers are able to get a donor more in step with campaign priorities.

Dong said he decided to endow a professorship of Epidemiology at the School of Public Health after a conversation with the dean there, and Buttenweiser recalls how he endowed a University professorship after then-University President Neil L. Rudenstine approached him and asked about it. Donors may also decide to give the University unrestricted gifts, allowing Harvard to use a donation as it sees fit.

According to Faust, the University thinks carefully before creating or significantly augmenting research programs because of gifts. If a subject is too arcane or narrow, it can be difficult to convince faculty to work on the project; instead, Harvard tries to guide donors to fund already-popular or promising programs.

“Faculty, especially tenured faculty, do what they want,” Faust said when asked about the University's involvement in research. “Sometimes they might be lured towards a subject because there are resources there, but more often they decide what it is they’re interested in and try to generate the resources to support that.”

And in some cases, Rogers said, the cost of perpetually funding a newly-established program may outweigh the benefit of the donation.

Harvard must be careful when accepting gifts, Rogers said, because endowed funds cannot be legally redirected to areas of greater utility.

“There are some donors who have their own ideas and things they want to accomplish, and as you can imagine, sometimes we can accept those gifts and sometimes we cannot,” she said.

In any case, Rogers said, Harvard plans to continue its capital campaign until 2018, scoping out first-time donors on “desert islands” and drawing more money out of repeat ones.

“The big number is great. It’s wonderful. Don't get me wrong, we feel very proud that we're going along so well,” Rogers said about the overall campaign goal. “But we do have a range of things where we’re not done, and we really, really want to look at that.”