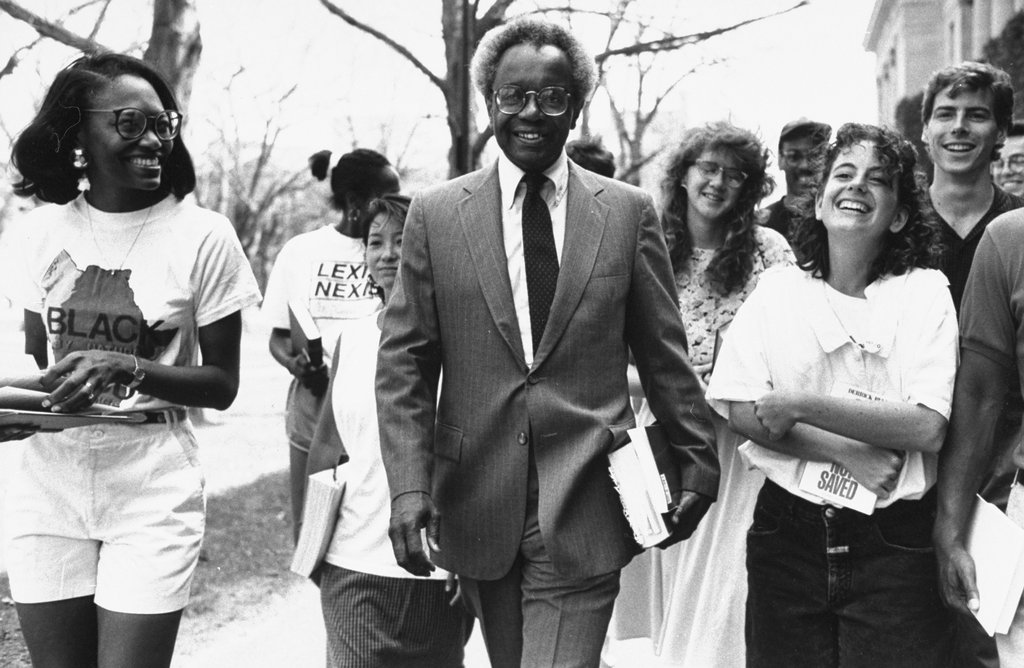 Students Carry On Tradition of Race Activism at the Law School

Harvard Law School had 65 tenured and tenure-track faculty in 1991. Five of these were black men, five were white women, and 55 were white men. None were women of color.

This statistic propelled 300 Law students to boycott their classes and gather outside the Law School’s student center on April 4, 1991 to march to Massachusetts Hall before taking over the office of then-Law School Dean Robert C. Clark overnight in protest of the lack of diversity among the school’s faculty. 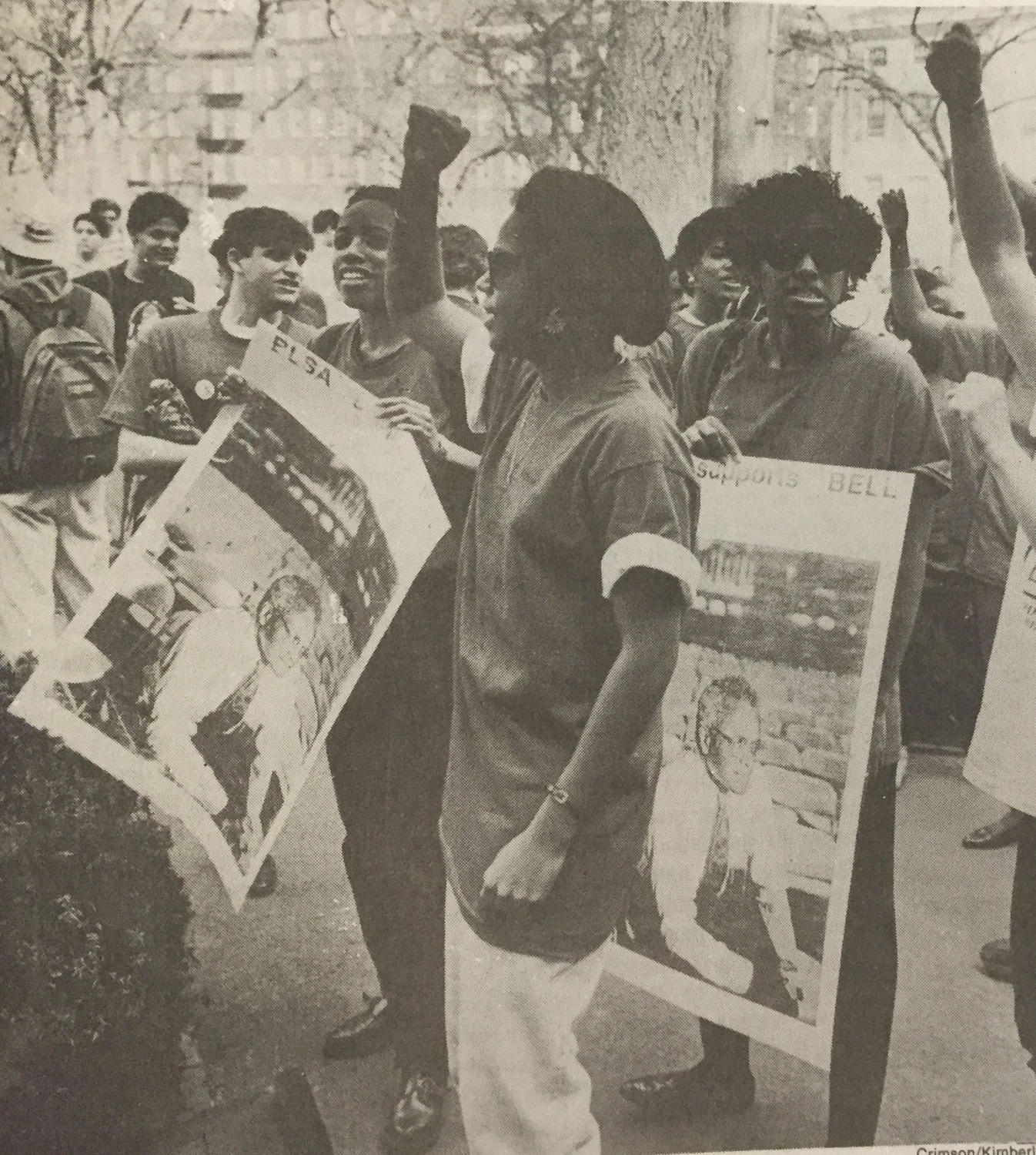 Law students protest outside of President Bok's office in April 1991. Over 300 Harvard Law School students participated in a class boycott, asking for increased faculty diversity. By Kimberly A. Ziev

But Caspersen has remained the center of student life and the rallying point of impassioned Law students demanding change. Protests have once again engulfed the school, placed pressure on administrators, and occupied the national spotlight, as the most recent movement to improve the experience of minorities at the Law School emerged in full-force this year.

A new generation of activists is at the school’s helm. Student activists’ demands are broader and their tactics adapted, as they have drawn inspiration from their predecessors and built their own movement on the foundation of a vibrant history of protest at the Law School.

The Law School found itself at the center of a firestorm in 1991, as administrators faced intense pressure from students to hire minority female faculty.

“We were there during a very tumultuous time,” Marcia L. Narine—a former self-described “radical protester” who graduated in 1992—said in an interview earlier this semester.

A collection of student affinity group leaders formed the Coalition for Civil Rights in 1989, drawing inspiration from anti-apartheid divestment efforts and a strike at UC Berkeley pressing law schools across the country to diversify their faculties.

Inspired by student activists, acclaimed Law professor Derrick A. Bell, Jr.—the first black law professor at the school—decided to take an unpaid leave of absence in protest of the lack of minority women on the faculty. A young Barack Obama, then a second-year Law student, stood nearby as Bell announced his decision to a crowd of students in April 1990.

Bell’s departure drew national media attention and fueled existing activism at the school. “Professor Bell leaving further solidified the importance of our activism and called out the gap in our faculty make-up,” Lisa R. Hodges, a former CCR member in the class of 1991, said. “We felt really validated by that, and his sacrifice was very meaningful.” 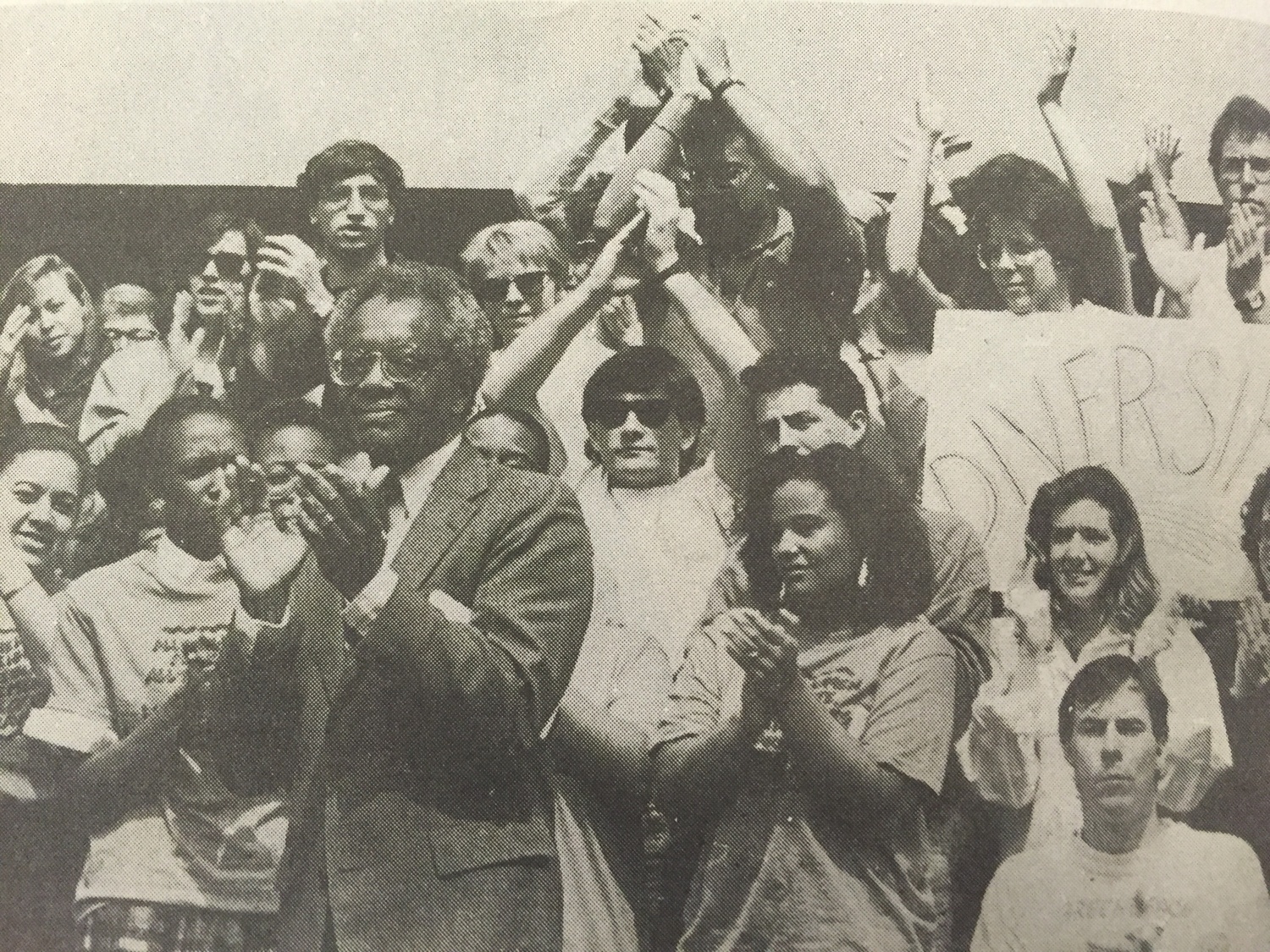 Activists held teach-ins and rallies, and presented administrators with a list of qualified women of color the school could hire. A group of CCR members also sued the school in the fall of 1990, arguing that discriminatory hiring practices harmed students. The suit—which a superior court judge later dismissed on the grounds that the students lacked standing—received attention from The New York Times and support from lawyers and civil rights leaders around the country.

Tensions escalated later that semester, when activists held a series of sit-ins in Clark’s office to draw attention to their cause and compel Clark to respond. The students’ allies among the faculty—including Bell and Law School professor Charles J. Ogletree—brought protesters blankets and food while they staged sit-ins.

Administrators, however, were less sympathetic. After students occupied his office in late April, Clark threatened them with disciplinary action.

The common perception of the Law School in 1991 was that of an institution fundamentally opposed to change. Ogletree described the faculty as “very conservative,” and John C. Bonifaz, a founding member of CCR, said Clark and faculty were unwilling to heed students’ calls to diversify the school’s ranks.

“Most of us thought that there were almost no faculty on our side,” Narine recalled. “[And] Dean Clark at the time was particularly insensitive to our concerns.” 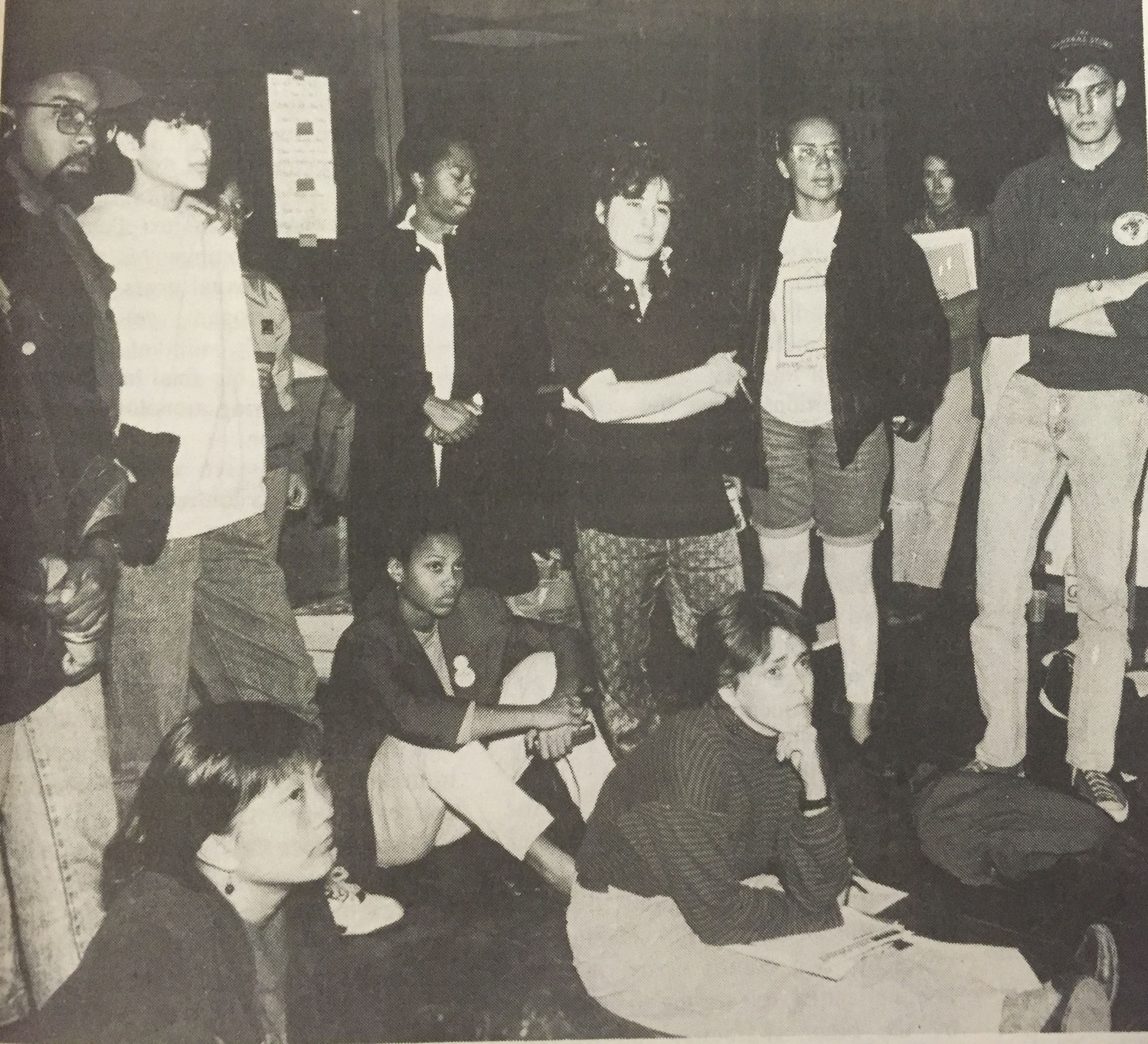 Harvard Law School students staging a sit-in in Griswold Hall hold a strategy meeting to decide what they will do if the police enter the building. By William H. Bachman

This perception was reinforced when two visiting female professors of color were not offered tenure-track positions, Hodges said. The school hired four white male professors instead in 1992.

Bell’s 13-year tenure at the Law School was terminated when he did not return by the summer of 1992. “He felt that if the school had not moved forward, he could not in good conscience go back,” Bell’s widow Janet D. Bell said in an interview.

By 1994, things had quieted down at the Law School as activism had effectively disappeared. The school did not hire its first woman faculty member of color—Lani C. Guinier ’71—until 1998.

Institutional memory is a perennial challenge for student activists, since movements are difficult to sustain once their leaders graduate. So when racial tensions resurfaced at the Law School this fall, current students turned to history for guidance.

“We were very interested in learning about the history of activism at Harvard Law. And one of the things we learned when we were starting our own activism was how much had been lost about what happened then,” activist and third-year Law student Bianca S. Tylek said. “It felt like every few years students re-invented [activism] because yet again another incident of racial animus occurred at the institution.”

The incident that sparked the current wave occurred in November, when Law School affiliates found pieces of black tape placed over the portraits of black faculty members in Wasserstein Hall.

The discovery sparked outrage, a police investigation, and protests relating to diversity and inclusion at the school. Students formed the group Reclaim Harvard Law—a diverse, leaderless coalition resembling the CCR of 1991 that adopted a similar system of democratic decision-making.

Like activists 25 years earlier, today’s protesters are calling on the school to increase the representation of minorities on its faculty. But the demands Reclaim Harvard Law issued to current Law School Dean Martha L. Minow in December also included removing the school’s controversial seal, reforming the curriculum, and establishing a critical race theory program.

When Morris A. Ratner, a former member of CCR who graduated in 1991, visited the Law School this year and observed contemporary activism in action, he was struck by the scope of students’ objectives. 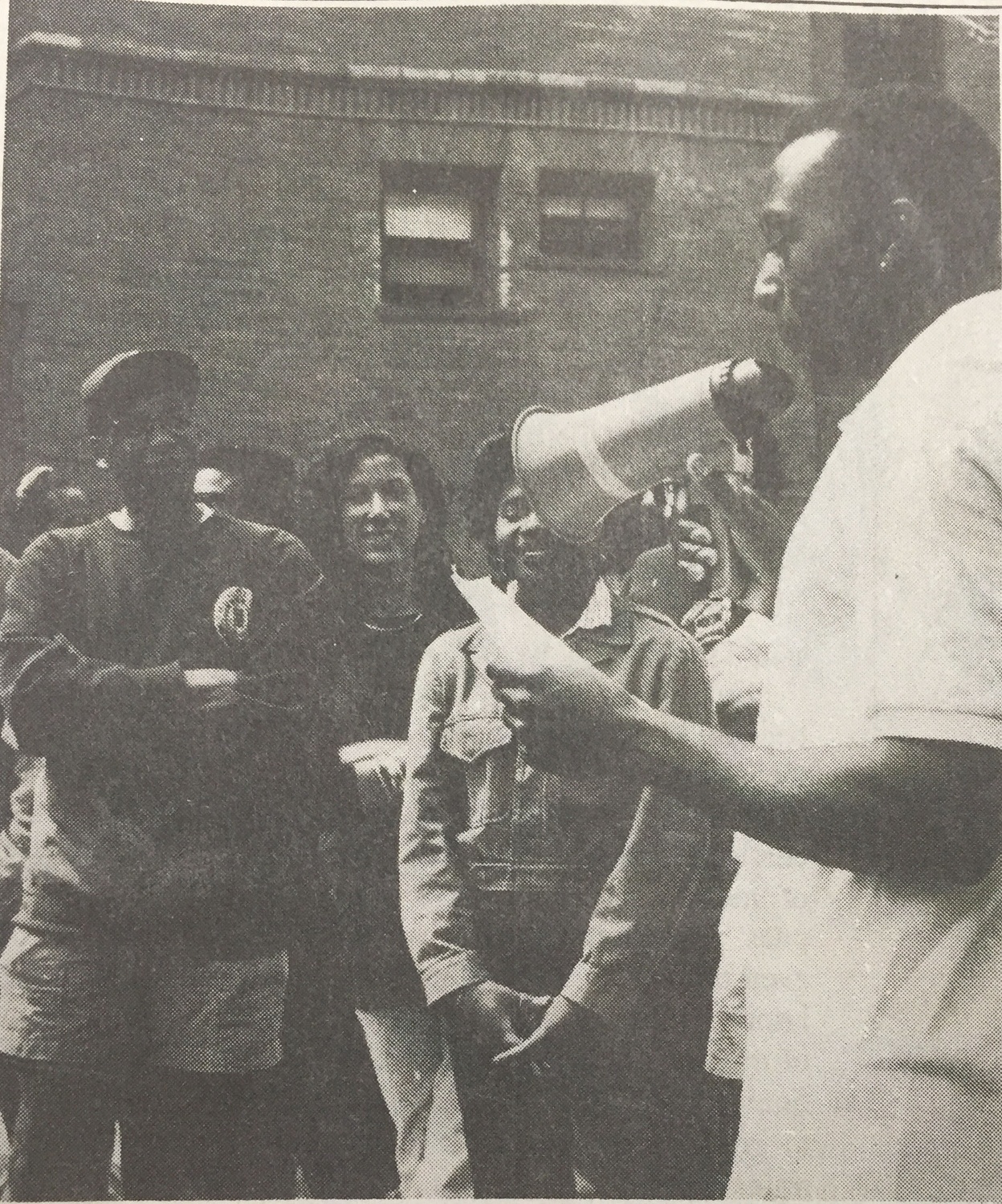 Students rally for faculty diversity at Harvard Law School in 1991. By Kimberly A. Ziev

“It seemed to me that the student demands were both more fundamental and more amorphous,” Ratner wrote in an email. “Today’s student protestors seem to want more than a reflection of themselves at the front of the class, but a wholesale shift in attitudes across the Law School.”

Current activists see their movement as an extension of the 1991 movement. “Our fight is a continuation of their fight,” Reclaim Harvard Law member Alexander J. Clayborne said. “One of the things we’re facing now is an understanding that just having faculty of color isn’t going to be enough if they’re not allowed to teach things that are going to be useful to other people of color. That’s why critical race theory is so important.”

Current activists have selectively incorporated elements and tactics from that era into their own movement. Like the students who occupied the dean’s office during sit-ins in 1991, Reclaim Harvard Law members have made occupying public spaces a central pillar of their activism. And activists read Derrick Bell’s books aloud at a teach-in they held in Minow’s office earlier this year.

Contemporary race-related activist movements across the world—such as Black Lives Matter and Rhodes Must Fall—have also served as sources of inspiration, according to Clayborne. New tactics borrowed from these movements, as well as social media—which has proven a powerful tool for increasing visibility—give Reclaim Harvard Law a modern flavor.

“Reclaim has kind of carried the mantle for many different movements of the past, and we’ve added our own things,” said Leland S. Shelton, a member of Reclaim Harvard Law and the outgoing president of the Black Law Students Association. “We’re standing on the shoulders of the past student leaders, and we hope that we’re growing a bit taller and speaking a bit louder.” 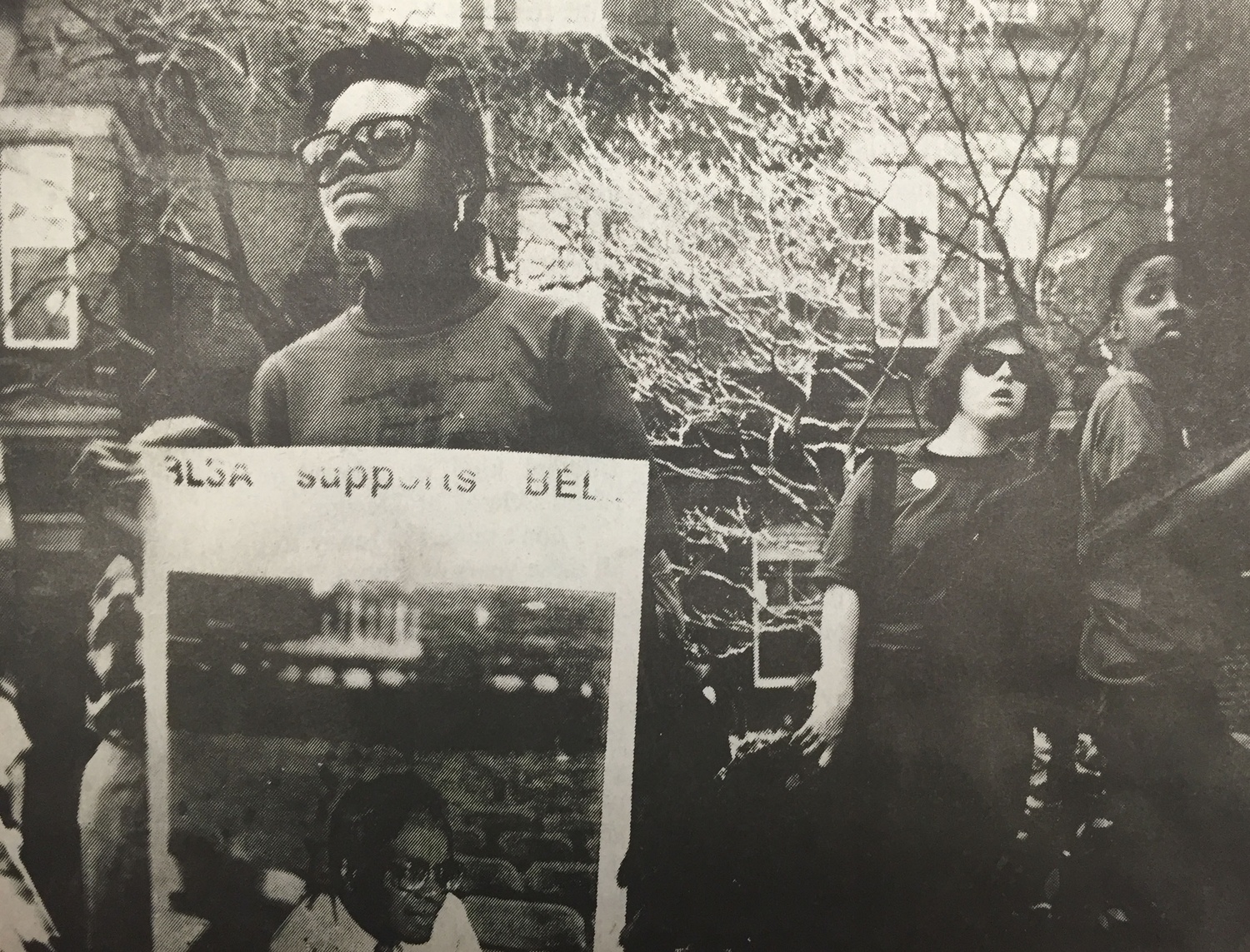 The Black Law Students Association, showing support for Professor Derrick Bell, rallied outside of President Bok's office in April 1991. By Kimberly A. Ziev

Alumni in the class of 1991 say the Law School is a very different place now than it was when they were students.

“The law school community, as a general matter, is a much gentler, kinder, more humane place to be,” Lecturer Stephanie Robinson, who was a first-year student at the school in 1991, said. “This place in it of itself is very different than when I was here.”

The faculty is noticeably more diverse now. Alumni and current activists alike agree that Minow is considerably more attuned to racial issues and receptive to students’ concerns than was Clark—a stark contrast that has translated into an environment more welcoming of activism.

“The administration, they didn’t care about us at all,” Narine recalled of her time at the school. “It’s completely different than how things were handled when I was there… At least Martha Minow did something.”

Minow has responded to current activists’ demands by creating a committee to reconsider the school’s controversial seal—which was retired in March—and outlining a series of initiatives in February to improve diversity and inclusion at the school.

While contemporary activists have remained critical of Minow, Tylek said they acknowledge that she genuinely cares about improving the experience of minorities at the school.

Contemporary activists also benefit from wider faculty support. Thirty-three faculty and staff members signed an open letter in support of activists in December. While this generation of students does not have a unifying, public figure like Bell around which to rally, Tylek said several faculty members have consistently provided Reclaim Harvard Law assistance in the form of advising, food, and solidarity.

Opinions on current activists and their demands vary among alumni who were involved in protests in 1991.

Some, like Narine, view the problems activists are focused on today as less serious than those she and her classmates were up against.

“I think what is important is to pick your battles,” Narine said. “You’ll have a lot of situations where if you’re a female or a minority, there’s always going to be what is perceived as microaggression or insensitivity and when you protest or complain too much, no one is going to listen to you.”

But in Robinson’s opinion, progress should not diminish the value of subsequent generations of activism. She thinks young people are the changemakers of each generation, and it is the duty of older generations to support them.

“Progress is undeniable. It’s better than it was when I was a student, and when we were students. Jim Crow is better than slavery, and so what?” she said. “That really isn’t the point at all. I truly just view these current protests in this broader historical context.”

Members of the class of 1991 who were involved in protest movements have made gestures to bridge the generational gap and advise current students. Several black alumni sent a letter in solidarity to the Black Law Students’ Association after the black tape incident, and some met with members of Reclaim Harvard Law early in their movement to share stories and techniques. And a group of 1991 alumni are compiling a targeted gift for their 25th reunion to advance dialogue and scholarship on race and diversity issues at the school.

While the Law School looks significantly different than it did in 1991, alumni are not surprised activism there has continued.

“I would be surprised if in 25 years we were not to see still a whole bunch of students engaged in some sort of activism taking over a public space and protesting,” Ratner said. “Each generation looks around it and finds something worthy of improving. It’s going to be ultimately unsatisfied with the status quo—that’s just part of being young and optimistic about change.”