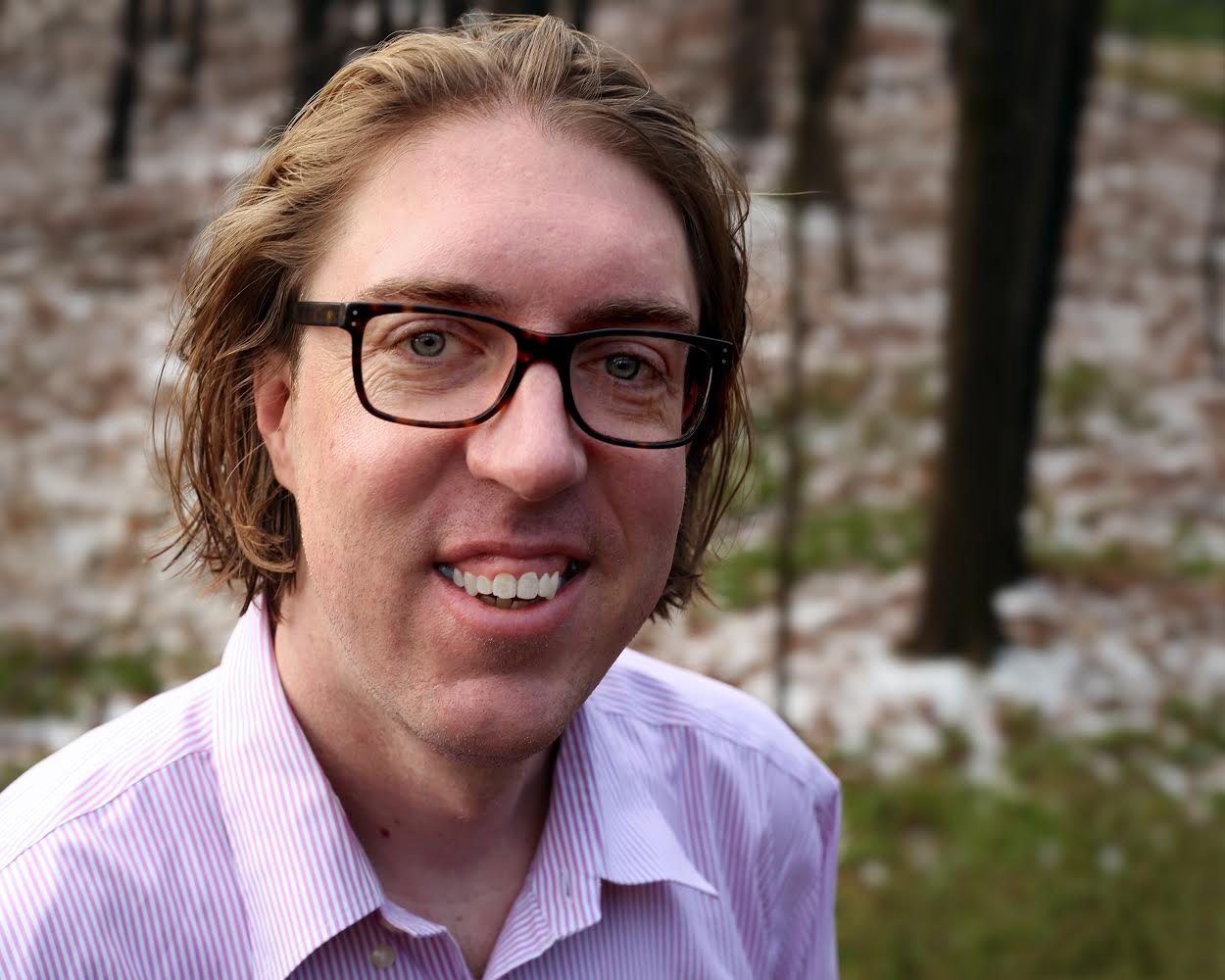 Take a high concept restaurant scene. Add a magical knife. Throw in a healthy serving of patriarchal villains and strong female protagonists, and you have the recipe that Jeremy P. Bushnell concocted for his latest novel, “The Insides.” A professor at Northeastern University, Bushnell made his authorial debut in 2014 with “The Weirdness,” which satirized the New York literary world to much praise. His most recent work carries on his signature blend of magical realism with sharp wit; The Crimson sat down with Bushnell to talk about his new book and his creative experiences.

The Harvard Crimson: Why did you decide to write and publish books?

Jeremy P. Bushnell: Well, that’s been something I wanted to do for a long time. Ever since I was, like, a little kid, I had an identity where writing and creative stuff was important to me. When I was real little, I used to make comic books that... you would call “fan fiction” nowadays. They were based on a Japanese television show character called Ultraman. Seeing “Ultraman,” I really loved it, so I started making my own comics and telling my own stories about the Ultraman characters.... I also remember that I had sold one of his comic books to a neighbor… so early on, I was not just creating, but I sort of wanted to be in the marketplace. I gradually got more serious about it and learned about the industry and the way that it worked and what it meant to do a career. It was all kind of a continuum from there, I guess.

THC: What has your experience of the writing industry been like?

JPB: I teach a course over at Northeastern that is about the publishing industry and how writers make their way around it, and it’s an interesting learning process that you figure out as you go along. I teach that course to help students through that part of [being a writer] because there’s a lot of schooling about writing. You learn a lot about the craft, but you learn less about the way that publishing works as a business. I majored in English with a concentration in writing. I did graduate school at the MFA. But it was only after that [schooling] that I figured out how the industry worked. I was lucky enough to get an agent that was desirable… [and who] represented me for an earlier book, which we didn’t have success [with]. That was an interesting learning experience right there. It was more of an experimental book with more of a sort of cerebral narrative. When my agent took it, he said flat out, “I’ll represent this book but I don’t think I can sell it.” So I did some more research [about] trends in the marketplace and… tried to emulate those aspects in my book to make it more market friendly.

THC: You mentioned that you teach a course at Northeastern. You’re also a fiction editor for Longform.org, a lead developer for a game, and, as you said, a professor. How do these eclectic roles affect your writing?

JPB: I really think that in some ways, working as a game designer and a teacher of writing both emphasized something to me in my creative work—which is that the revision process is very important. As a teacher of writing, I always encourage students to do first an outline and then an early draft and then a rough draft and then a final draft. I encourage students to go through this process of multiple drafting and explain that your paper gets better with each draft. I was able to teach that easily, but I still had a sort of a blind spot against it in my own work. I still kind of liked to write a draft and make a very light revision and then be done of it and put it away. And I think that was a mistake, and it took me some to figure that out. Designing a game was really helpful with that. When you’re designing a board game… you make these sort of complex systems but you don’t know how they are going to play out. So you have people play test them and the… first version of your game always sucks. They’ll play it, and it’s no fun, and you have to make tweaks and changes.... But then people find a loophole, so you have to close the loophole. So working on a game, I just iterated [the game] hundreds of times, and each time I could see that the game was getting more fun…. [Learning to revise] was kind of the final big creative hurdle for me… and I think my work in other fields really helped me with that. 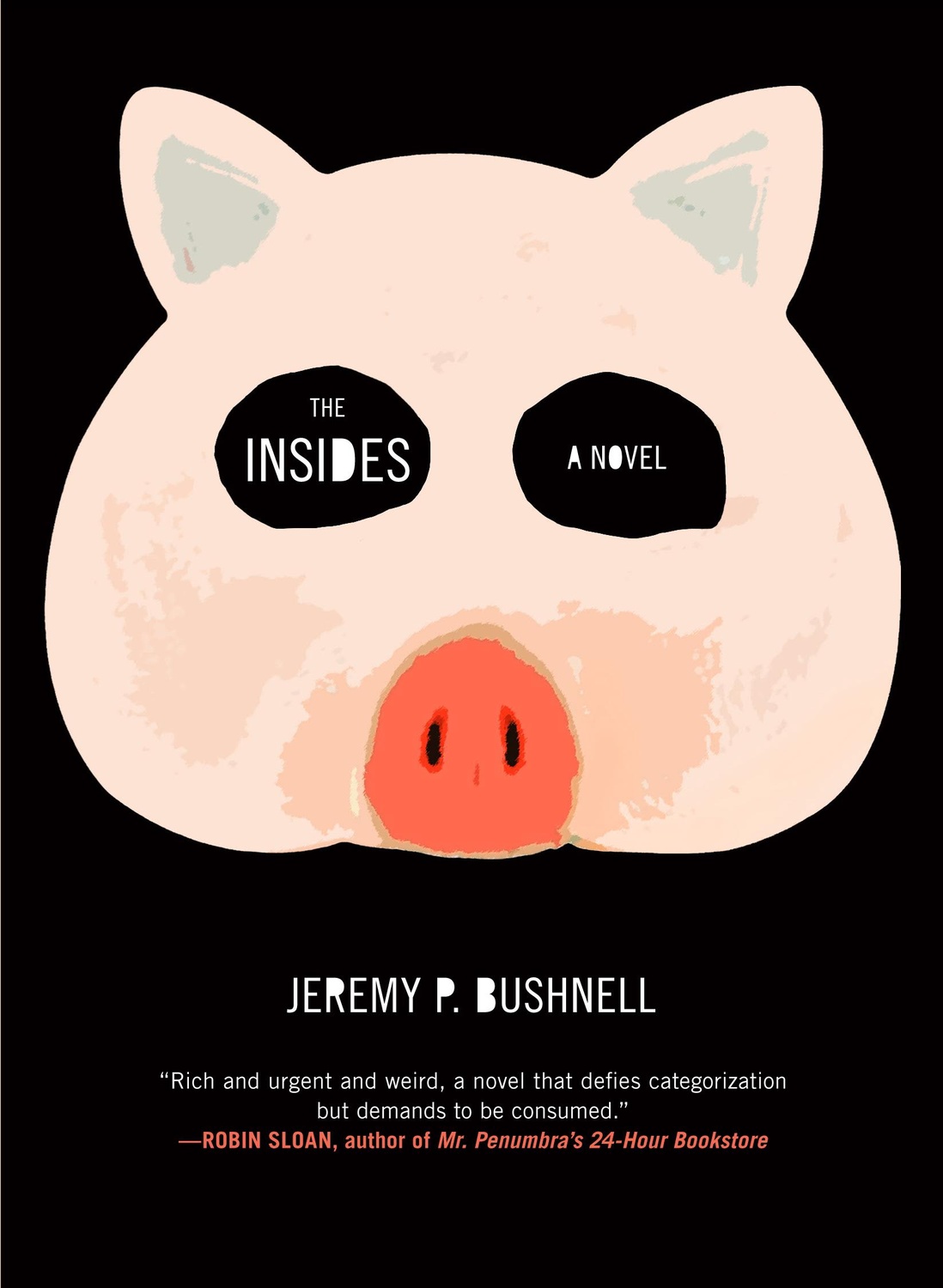 "The Insides" by Jeremy P. Bushnell By Courtesy of Melville House

THC: Turning to your stories themselves, what made you chose a high-concept restaurant scene for “The Insides”?

JPB: I had done this previous book, “The Weirdness,” which was about the literary scene. And I didn’t want to stay in that territory, so I was looking around for some other scene that was right for parody. And I thought, well, the New York food world is definitely a world that could be easily satirized…. As it ended up, I did less satire than I had initially intended. The new book is little more serious and a little more weighty in terms of its themes, but I had sort of chosen the milieu and kind of wanted to stick with it.

THC: I also noticed that your protagonists, Maja and Ollie, are both female.

JPB: My first book was normal for me—like white male, young guy protagonist…. [So] there was a part of me that just creatively wanted to branch out and try writing a different type of characters. I consider myself to be a feminist writer, and I think it’s important to have stories where heroes are women, both written by women and men as well. I think it’s worth telling these kinds of stories…. On another level, the story is sort of about struggles around power, about how people who are more powerful kind of exploit and do harm to people who are more marginalized…. This book is about patriarchy. The villains are a father and son team looking to gain power against others. It’s literally a book about patriarchy. And I figured, if your antagonist in your book is a group of evil patriarchs, it probably makes sense to counter them with a protagonist who is a young woman. So I put those forces in battle with one another.

THC: What made you settle on such weighty themes?

JPB: Those are the themes that I think about in my daily life. I spend a fair amount of time reading progressive writers and thinking about progressive politics…. I think someone can read my novels without looking for political context and still enjoy it... but I just think about these issues and want them to surface in the writing. Also, in some ways this is a book about loss and the sadness that people keep. The title, “The Insides,” which in the book refers to a magical realm… [is] also about what’s deep inside of us—sort of about wounds and painful memories that we hold onto and stuff down inside of ourselves. The book is real concerned with how you process those things and deal with mistakes in the past…. This book asks, if there’s shortcut to erase those mistakes or change things in some way, would you do it? That’s an interesting question, but it does make for a book with some deeper emotional resonance.

THC: Why do you choose to blend genres and employ magical realism in your stories?

JPB: I mean, that’s a choice that’s reflective of my habits as a reader. I read all kinds of stuff, from pretty heavy theory to kind of real silly, trashy comic books to junk sci-fi to stuff that’s listed like literary to fantasy. And it’s all sort of genre-hopped in my reading, and I view them all as pools to draw from…. To me, it’s not like I’m making a conscious choice to genre-swap. I just kind of write about what I want to write about, and it tends to be somewhat comic, somewhat horrific, and somewhat realistic.

THC: What’s it been like to get so much praise and acclaim for your stories?

JPB: I would like to have more complicated answer about it, but it feels good to put something out there and to see that it’s resonating with people…. With this book, obviously some things were hard. As a white male writer writing a protagonist who is a woman of mixed race, there’s some concern of, like, “Did I do that right?” If you get the notes wrong, there’s more danger there…. And some of the reviewers who were women of color spoke to the fact that it resonated with their experience, and that was hugely important with me. I think that if you’re going to make the choice to tell a story that hasn’t been your own, you have a real responsibility to try to get it right and do your homework about it and make sure that it rings true to those readers as well. So I’ve been happy to see that [many critics] seem to feel that aspect of it came out well.