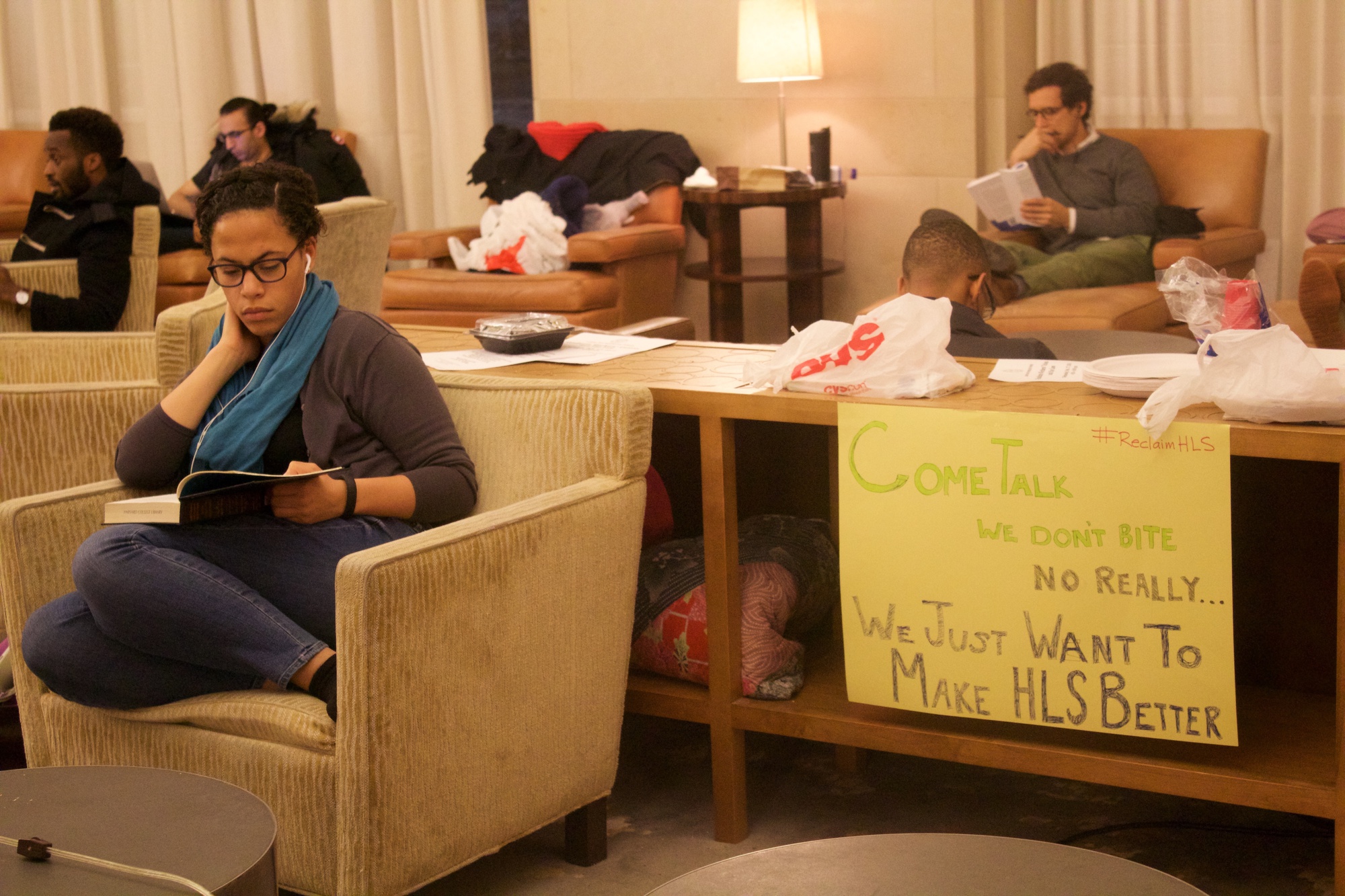 Tori Anderson, a 3L at Harvard Law School, studies by a sign in the Caspersen Student Center lounge space that student activists renamed “Belinda Hall”. Students held public teach-ins and spoke to passersby about their cause over the course of their occupation.
By Claire E. Parker, Crimson Staff Writer

Following a year of of tension and discussion related to diversity at Harvard Law School, administrators unveiled a total overhaul of first-year orientation this year to acclimate students from varying backgrounds.

Dean of Students Marcia L. Sells oversaw the restructuring process—a year-long project in which she consulted students and faculty to re-envision a “holistic approach” to orientation.

“We really looked at the whole shape of orientation, from the key vantage point that it’s about how do we provide an opportunity for students to feel like they are acclimated to HLS and their surroundings and what the whole law school experience is about,” she said. 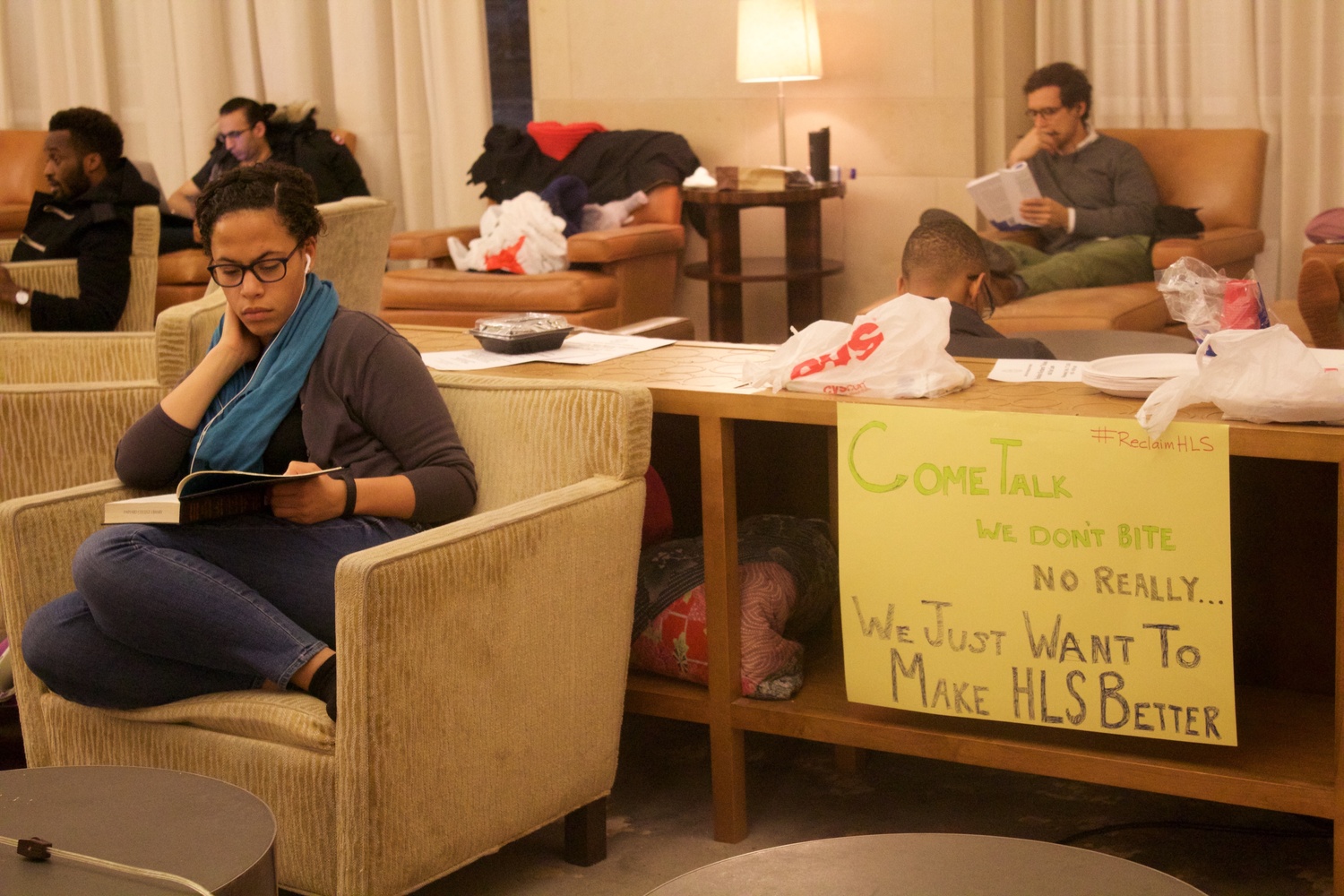 Diversity and inclusion dominated campus conversation at the Law School last academic year, after a student group called Royall Must Fall began calling on the school—ultimately successfully—to do away with its controversial seal, which featured the crest of a prominent slave-owning family. A racially-charged incident of vandalism last November gave rise to a second activist group—Reclaim Harvard Law—which issued a series of demands to Law School Dean Martha L. Minow in December. Their demands included reforming 1L orientation.

But Sells—and other administrators and students involved in the process—said that reforms to orientation were in the works well before activist groups emerged.

As early as last September, first-year students dissatisfied with their orientation experiences brought the issue to Sells’s attention. One of these students was now-second-year Charlie Fletcher, who felt the Law School’s orientation fell short compared to the program at the Kennedy School, where he was a joint-degree student.

Frustrated by the lack of concrete information disseminated to first-years, Fletcher took an informal survey of students and typed up a memo with his complaints and recommendations, which he submitted to Sells’s office.

Fletcher and Cameron Clark, who is now a second-year Law student and member of the student government’s Diversity and Inclusion committee and several affinity groups, also felt there weren't many affinity groups contacting incoming students at the start of the semester, leaving students feeling lost.

“A lot of marginalized students had an issue with the lack of affinity groups on campus,” Clark said. “Imagine you’re already three weeks in… and only now are you getting the opportunity to reach out to fellow black students or fellow queer students. It was a very alienating process.”

Clark and Fletcher met with Sells, and said she and other administrators in her office were very receptive to their concerns.

“We learned a lot of things from that conversation,” said Jeffrey C. McNaught, the Law School’s Senior Director of Student Affairs and Administration. “We learned that our communication approaches, our messaging, we needed to improve on.”

Sells met with students including Clark and Fletcher, student group members, and activists throughout the year—as well as faculty members who lead first-year sections—to work toward debuting a restructured orientation program in August.

Some of the changes explicitly focused on diversity and identity. The Law School brought in the diversity training consulting group Verna Myers—an organization founded by Law School graduate Verna Myers that previously authored a 2002 report on race relations at the school—to lead sessions on equity and community engagement. Session leaders talked to students about dealing with differing viewpoints and discrimination, and asked students to reflect on what they considered to be important aspects of their identity.

First-year Devony Schmidt said she found the sessions satisfying and productive, and also heard positive feedback from other first years. “The woman who led our session was just terrific–very engaging, and really made things that can be very uncommon to talk about such as racial identity very accessible,” Schmidt said.

“It was just a way for them to kind of find their people early,” Student Activities Coordinator Tracey-Ann Daley, who coordinated the affinity group meetings, said. “I think that was a huge thing—we got really good feedback.”

Administrators also sought to prepare students more broadly for law school by incorporating the Board of Student Advisers—a group of second- and third-year Law students—into orientation programming to answer student questions as peers, prepare first-years for their first classes, and fill in any gaps in their basic knowledge of the structure of the American legal system and the Law School.

“I know from my own Law School experience that there is the assumption that you know these things from the faculty… and you always felt that if you weren’t from a family of lawyers or knew lawyers, that somehow you didn’t have the keys to the kingdom,” Sells said. “That is what we did not want. That was the level set for everybody—that you have access.”

One hundred and seventy-two Masters of Law students submitted a feedback survey to the Dean of Students Office indicating an average satisfaction level of 4.9 out of 5 with diversity-related programming during their orientation. Sells said she is waiting to receive survey responses from two-thirds of the JD class before analyzing their evaluations.