Harvard Management Company lost almost $2 billion in endowment value during a “disappointing” fiscal year 2016, posting its worst endowment returns since the nadir of the financial crisis and marking the latest in a string of underwhelming investment results for the world’s largest university endowment.

The negative 2 percent returns, which HMC announced Thursday evening, bring the endowment’s total value to $35.7 billion, down from its $37.6 billion value at the end of fiscal year 2015. Beyond the poor investment returns, several financial flows affect the endowment's value, including the $1.7 billion HMC distributed to fund Harvard's over a third of the Harvard's annual budget.

Repeatedly characterized as “disappointing” in interim CEO Robert A. Ettl’s annual endowment report, the returns come during a difficult year for large institutional investors, particularly universities, amid volatile global markets. Still, the University’s investment arm fell short of its internal benchmark of returning 1 percent on its endowment—equivalent to hundreds of millions of dollars—during the turbulent fiscal year, which ended on June 30.

In his report, Ettl attributed the loss in part to the “low interest rate environment and market volatility of the past fiscal year,” but he also acknowledged that HMC’s internal performance was also to blame.

“[W]e recognize that execution was also a key factor in this year’s disappointing results,” he wrote.

Ettl became the interim CEO of HMC in late May when Stephen Blyth took a then-temporary medical leave of absence; Blyth eventually resigned as CEO in July after only 18 months in the position. The University continues to search for Blyth’s permanent replacement and is considering at least two higher education investment professionals to next lead HMC.

This year’s returns represent the largest dollar loss on the endowment since fiscal year 2009 when the financial crisis drained almost $11 billion from Harvard’s coffers. Fiscal year 2016 marks the first time Harvard has lost money on its investments since fiscal year 2012, when it returned a negative 0.05 percent.

The negative returns—and failure to reach many internal benchmarks—follow several difficult years for HMC. Last year, Harvard earned 5.8 percent on its investments, meeting many internal goals but falling short of the returns at several peer institutions and drawing the concern of University President Drew G. Faust. It was Blyth’s first, and only, full fiscal year leading HMC.

HMC’s natural resources portfolio—which composes 10 percent of Harvard’s total investments and has been a strong performer for the firm in recent years—posted losses of 10.2 percent, falling short of their 1.4 percent goal by a full 11.6 percentage points. In the report, Ettl cited “unfavorable market and business conditions across two assets in South America” as cause for the poor performance. The University owns a number of timber plantations in Argentina, among other investments.

Public equity assets, which make up 29 percent of the total endowment, also fell 10.2 percent in value, failing to meet a negative 6.1 percent benchmark. One of the fastest growing asset classes last year, public equities returns are now prompting HMC to reconsider how it conducts investments in that area.

“We have repositioned our public equity strategy to rely more heavily on external managers,” Ettl wrote in the report.

HMC is unique in the endowment world for splitting its investments between both internal staff members and external management firms in what it calls a “hybrid model”—the Yale Investment Office, in comparison, relies much more heavily on outside managers. According to the report, though, HMC is transitioning away from the model it pioneered, reducing the size of its internal team and focusing on a “core group of top managers.”

The 2016 financial report is half the length of last year’s, which included a letter from then-CEO Blyth detailing his plans to “reinvigorate” HMC. Some of Blyth’s proposals, like tying manager compensation to overall fund performance, are now in the works; others will be left to the firm’s next CEO to implement or not.

HMC lost billions in investments as the University aims to raise billions in donations durings its capital campaign. Earlier this month, Harvard announced that it had raised more than $7 billion during its capital campaign, breaking a higher education record and far surpassing the University’s $6.5 billion goal. Many of the donations Harvard receives are invested into the endowment. 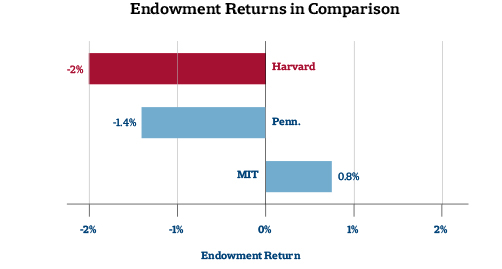 While “disappointing,” the endowment results were not unexpected: University President Drew G. Faust warned of the possibility of poor returns in an interview with the University-run Harvard Gazette last week, and a number of other large university endowments have posted losses this year.

Looking forward, Ettl wrote that he felt “confident about the moves we have made to reposition the portfolio,” but tempered expectations for high returns in coming years.

“As we enter fiscal year 2017, the investment landscape continues to be full of uncertainty,” Ettl wrote. “With a backdrop of slowing growth and rich valuations, endowment returns could be muted for some time to come.”