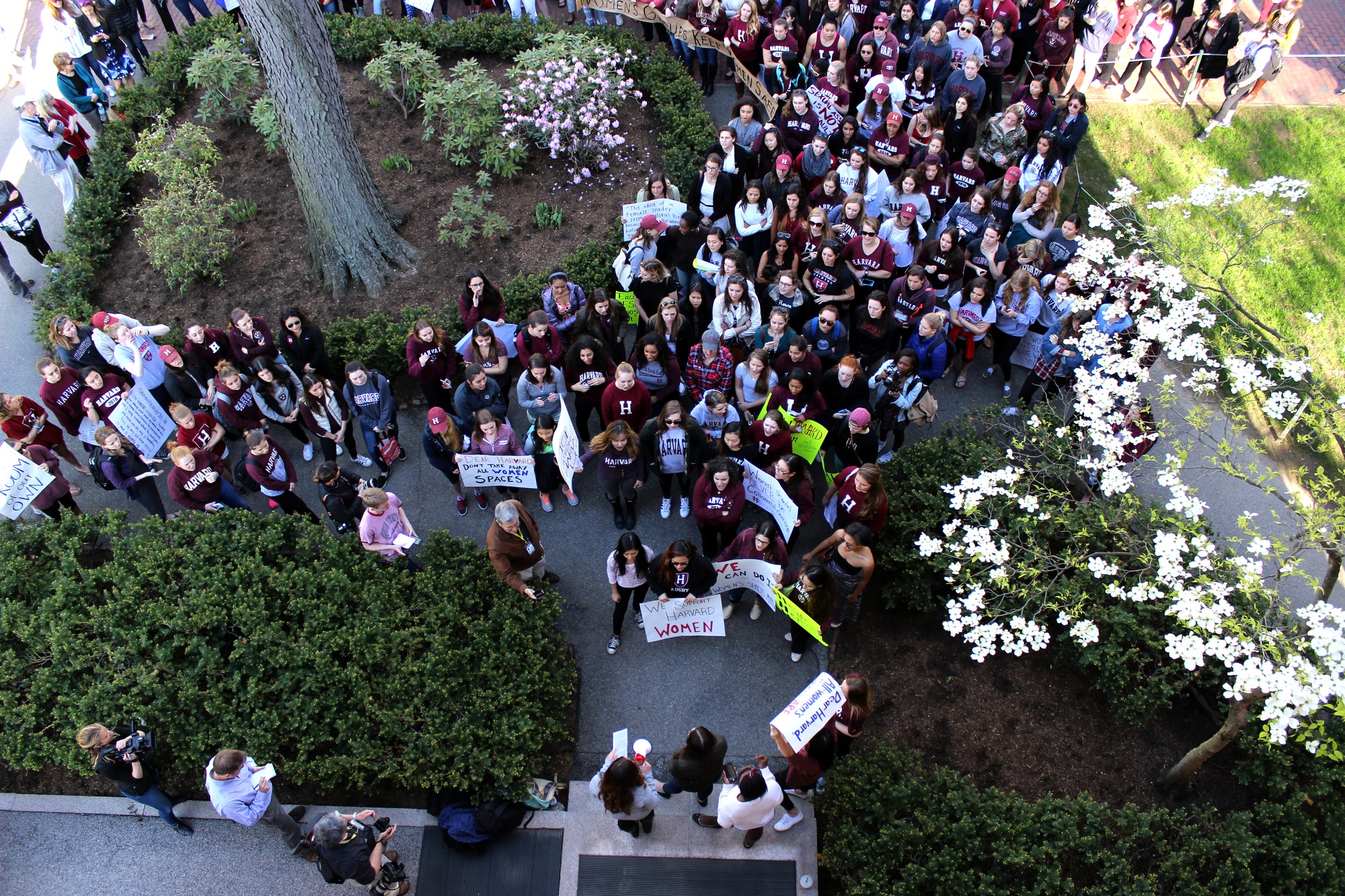 Days after the sanctions' debut in 2016, scores of sorority and female final club members protested outside the president's office. Two years and three months later, every one of Harvard's all-female groups has agreed to go co-ed.
By C. Ramsey Fahs, Crimson Staff Writer

The currently all-female Sablière society has committed to going gender neutral by next fall, according to graduate board president Ariel Stoddard ’10.

Undergraduate and graduate members of the Sab approved the change—which the club had preliminary announced last spring—in a two-thirds affirmative vote last weekend, making the Sab the first of the five all-female final clubs to publicly announce a plan for a gender neutral transition. The club has now outlined a specific timeline for the transition by 2017, Stoddard wrote in an email to The Crimson Tuesday.

The Sab is also the first final club, male or female, to put forth concrete plans to go gender neutral after the announcement of College sanctions that, starting with the Class of 2021, will bar students involved in single-gender social organizations from leadership positions and College endorsement for certain coveted Fellowships.

The Seneca, a currently all-female 501(c)3 group that does not identify itself as a final club, plans to go gender neutral, though its leadership believes the club could remain single gender in practice without invoking the College’s impending sanctions.

Though the Sab will become gender neutral the same semester as the sanctions take effect, Nohria called the decision “the culmination of over a year of discussions” within the club. She stressed that while administrative pressure and campus climate had some bearing on the decision, much of the impetus for change was internal.

Nohria said the Sab has also committed to making the move without merging with an all-male club, adding that avoiding a merger “allows us to define what we believe a social organization on campus can be.”

The all-female Bee, IC, and La Vie clubs have all met with the all-male Delphic club to explore the possibility of a merger, according to Delphic Club correspondence from May.

Nohria described the full year between the announcement and when the Sab will begin accepting non-female members as an opportunity for “due diligence in making sure that we create the best framework” for a gender neutral punch.

“We wanted to make sure that if we were going to undertake a significant change in our membership, we wanted to plan it appropriately for that membership,” the Sablière’s culture chair Morgan E. Arenson ’06 said. “We have to acknowledge that things will be different when you’re not just looking to bring Harvard women into the club.”

While the change is likely to please College administrators, who for over a year have been urging single-gender social organizations to widen their membership policies, Nohria said the club has “not announced it beyond our club at this point.”

Though constitutionally the Sab’s change only required two-thirds approval from undergraduate and graduate leadership, Stoddard wrote that Sab leadership had “agreed not to move forward without a ⅔ majority” of the entire undergraduate membership, a threshold reached over the weekend.

Sab leaders also said they expect no administrative support or reward for their decision—a possibility that Sab co-founder and legal chair Eugenia B. Schraa ’04 said was floated in a meeting last May with Assistant Dean of Student Life for Equity, Diversity, and Inclusion Emelyn A. dela Peña and Associate Dean of Student Life David R. Friedrich.

Women gathered in the Yard in May to protest the College's sanctions against unrecognized single gender social organizations. By Thomas W. Franck

“There’s been so much ambiguity and there continues to be so much ambiguity,” Schraa, a former Crimson editor, said of the College’s administrators. “In the end we went with what the undergrads feel deeply about their identity and that made it a bit easier than thinking about what the administration is really going to do.”

Schraa added that many in the Sab still identify with the grievances against the administration that some club leaders aired in a Crimson editorial in April. Nohria preferred to focus on the club’s actions “as opposed to [the] sanctions.”

“We believe that it’s a really feminist movement for women to open up their spaces in this way and that it allows us to define what we believe a social organization on campus can be,” Nohria said. “We are proud to be pioneers in this.”

Despite the historic nature of the change, Arenson said she hopes it will not fundamentally alter the club.

“The plan is there will be a lot of consistency in how [the Sab] feels … apart from the literal question of gender,” Arenson said.