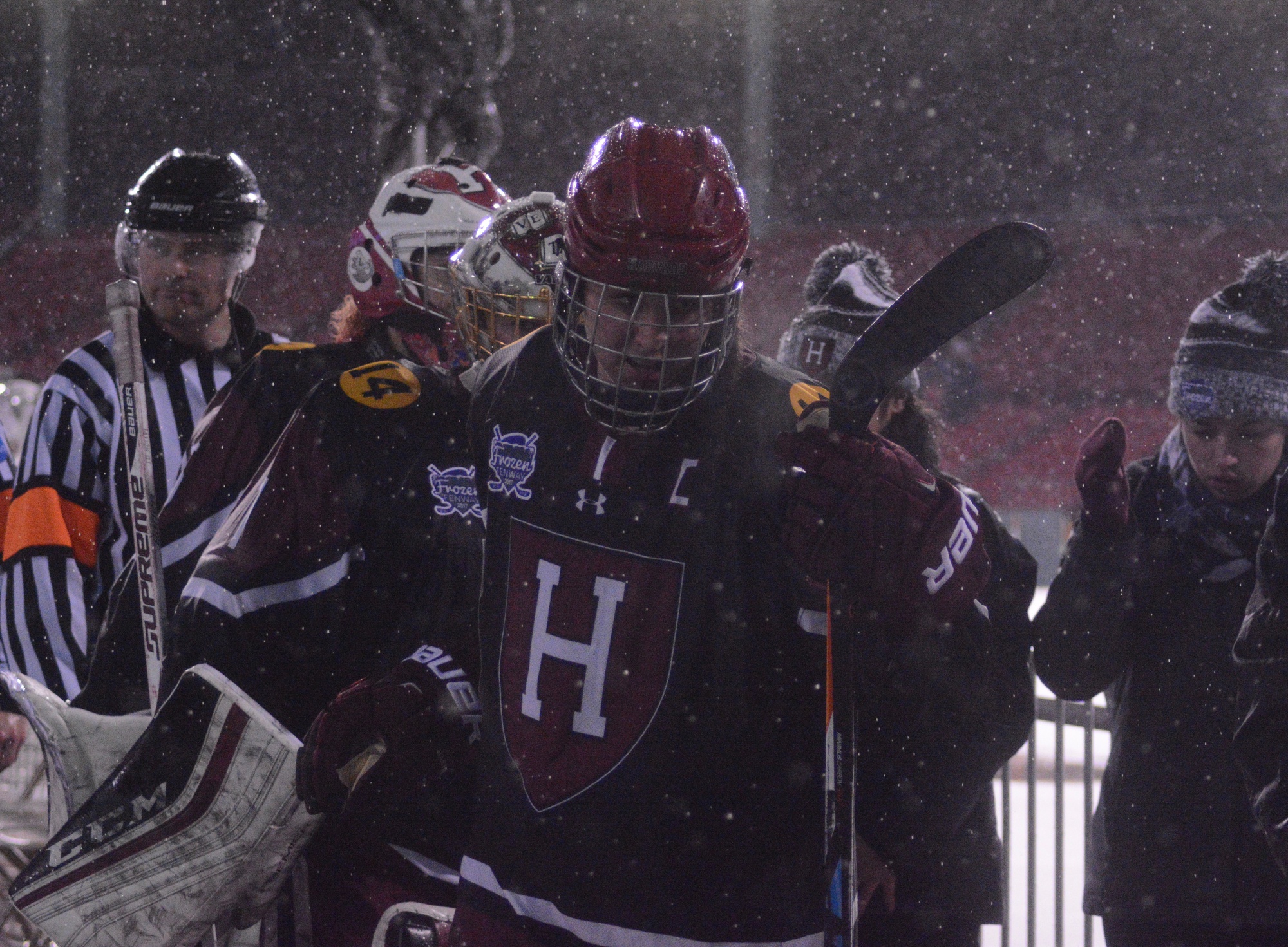 Senior co-captain Sydney Daniels steps off the ice amid the downpour that persisted during Frozen Fenway. By Jake Meagher
By Ariel Smolik-Valles, Crimson Staff Writer

But that is exactly what happened on Tuesday night as the Harvard women’s hockey team (1-11-2, 1-7-2 ECAC) faced off against No. 6/6 Boston College (14-3-4, 11-2-2) in the Frozen Fenway series at Fenway Park. With many players hailing from the Boston area, playing hockey at Fenway is something that has only been a distant fantasy until this year.

“Coming from Boston, it’s one of those things that’s on you bucket list that you want to do,” junior Lexie Laing said. “I was thinking during the game even playing in the rain is something that’s on your bucket list, but you don’t realize it until you experience it, so for me it was pretty cool.” 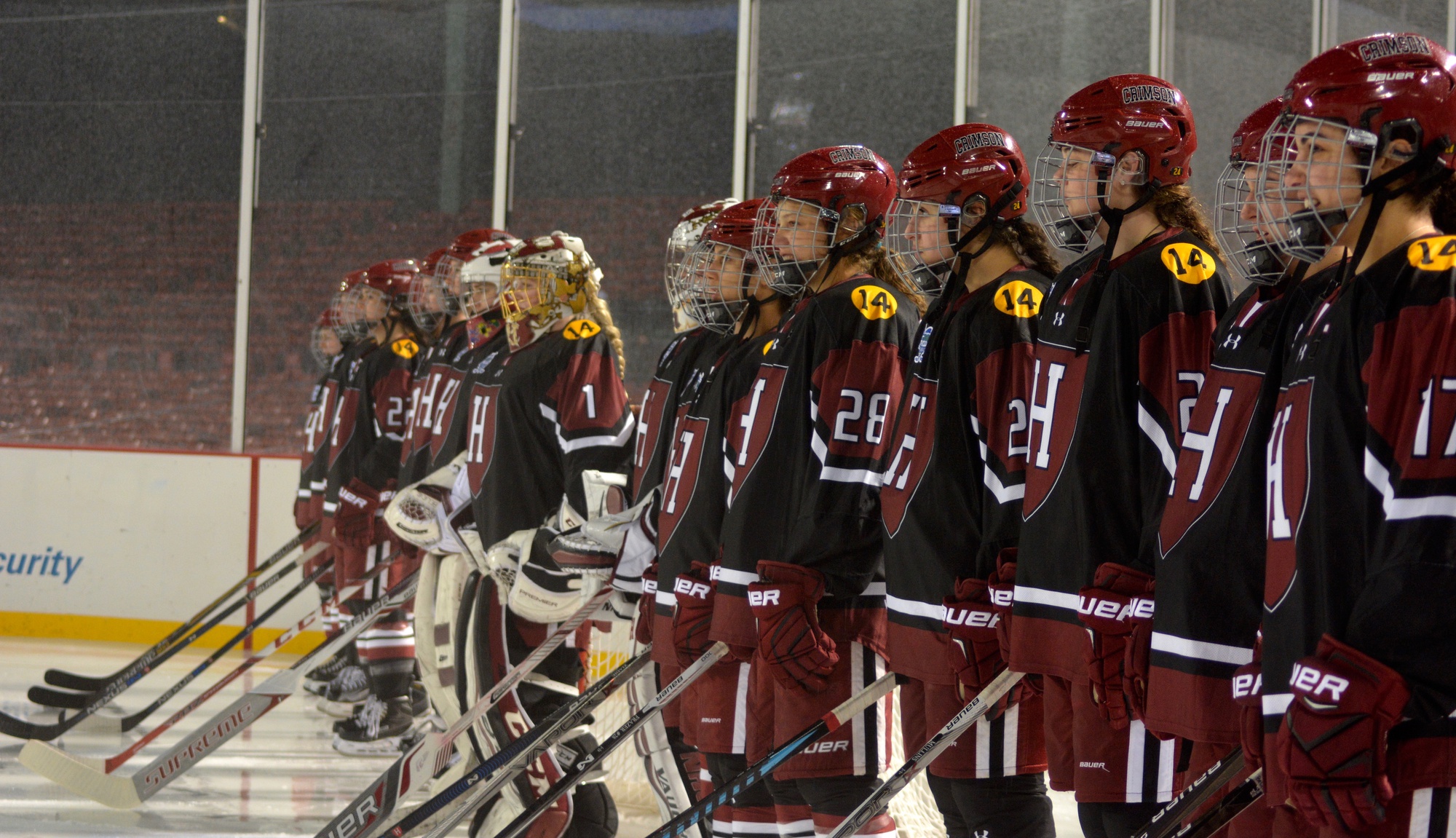 The Crimson lines up along the goal line prior to puck drop. By Jake Meagher

In a waterlogged game where the puck moved slow and the ice was slippery, the Eagles clinched a 3-1 victory over the Crimson with two goals coming from the stick of freshman Erin Connolly.

Coming into the game Harvard had been on a on a slide where it had not won a game since Oct. 23. Six out of its past 10 games were forced into an extra frame, leaving the Crimson on the cusp of victory many times before.

On the other side of the puck, BC went 10-1-2 over that same span with a record of 6-0-2 in the eight games leading up to Frozen Fenway. The last time these two teams met, the Eagles lit Harvard up for eight goals while giving up none and shutting out the Crimson 8-0 in the opening round of the 2016 Beanpot.

This game went a little differently from the beginning. Harvard came roaring out of the starting gate and controlled the puck in the BC zone for the opening two minutes of the contest. The Crimson was able to hold the Eagles scoreless through the first period of play and almost halfway through the second frame before the scoring started. 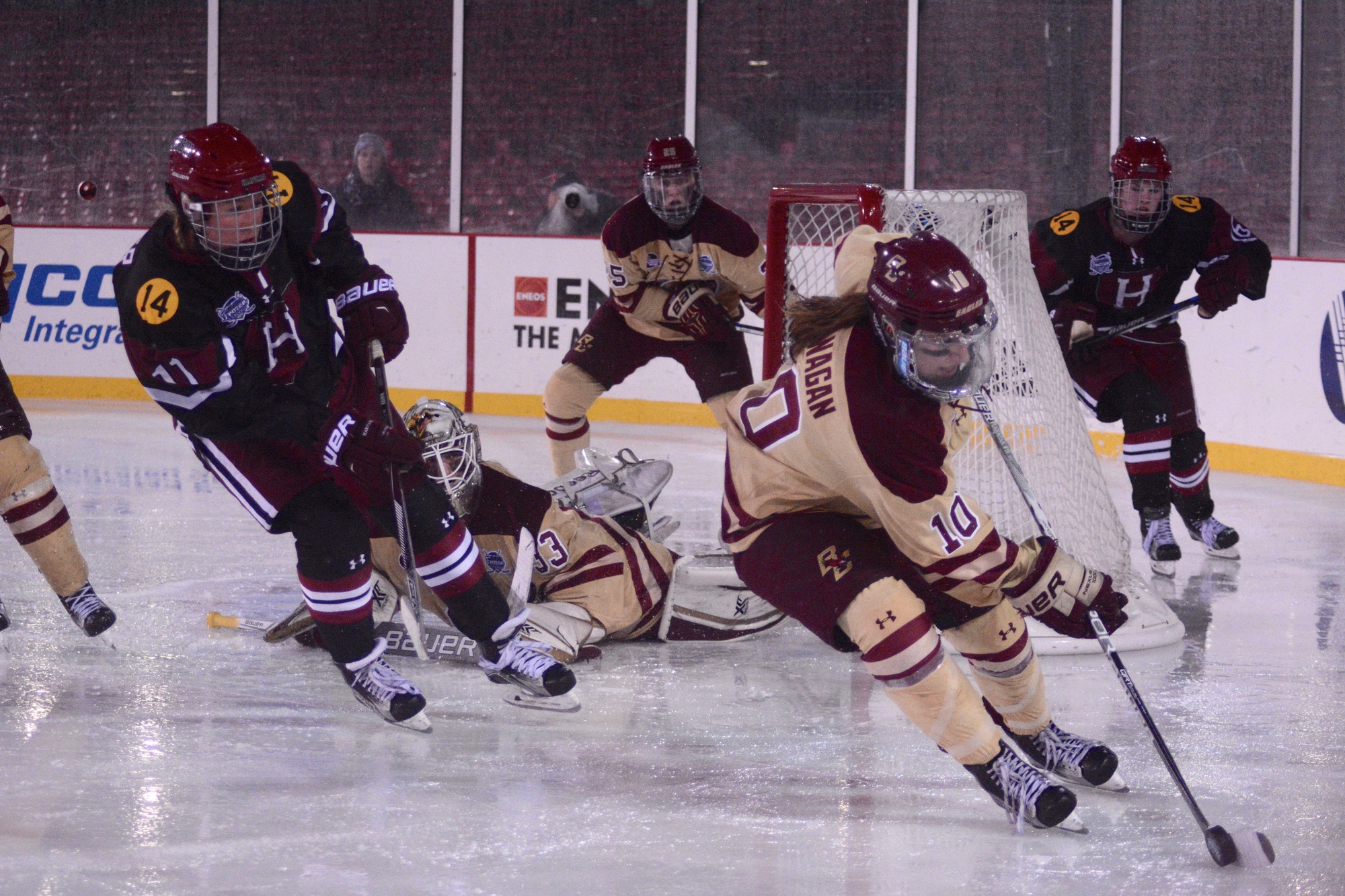 Boston College broke the silence at the 9:45 mark of the second period when senior Andia Anastos fed a pass to freshman Bridget McCarthy who found a hole in front of Laing. The Eagles struck again within the next five minutes of play when Connolly was again fed from Anastos and caught Laing in transition, hitting the puck home in the corner of the net. Connolly would score again in the third period on an unassisted shot. 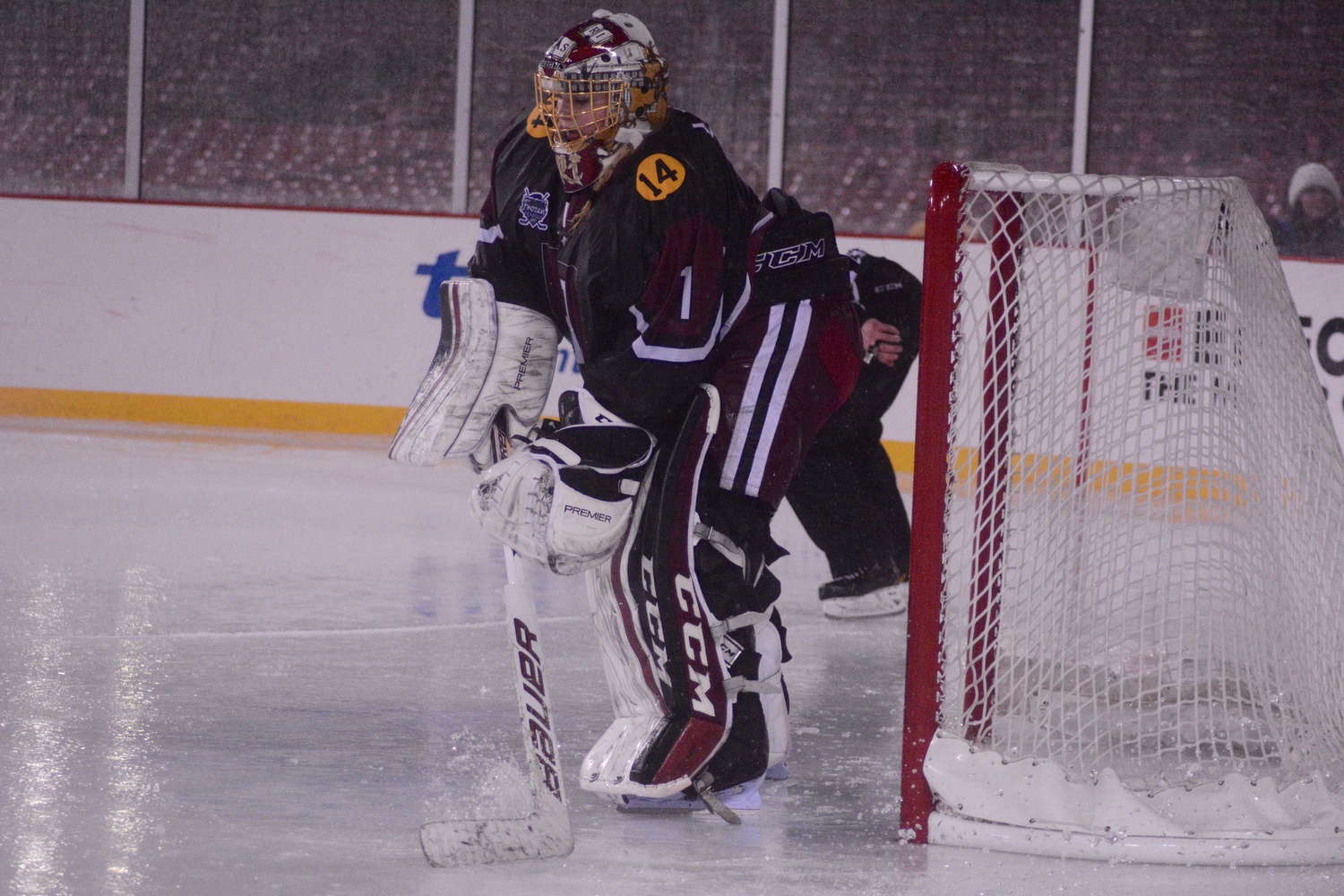 Harvard goaltender Brianna Laing spent several stoppages of play sweeping water out of her crease and the surrounding area during the third period. By Jake Meagher

As time elapsed and the conditions started to worsen on the ice, Harvard head coach Katie Stone had one message to her players; keep it simple.

“When you’re playing outside, whether it’s raining, whether it’s snowing, you’ve got to simplify your game,” Stone said. “When we did that I think we had a lot of success. When we started to over-handle things a little bit and tried to make something that wasn’t there, that’s when things get a little scattered.”

The Crimson was able to pull together a scoring effort late in the third period and ruin BC goalie Katie Burt’s shutout when freshman Kat Hughes punched in a pass from Bradley Fusco that found the back of the Eagle goal. 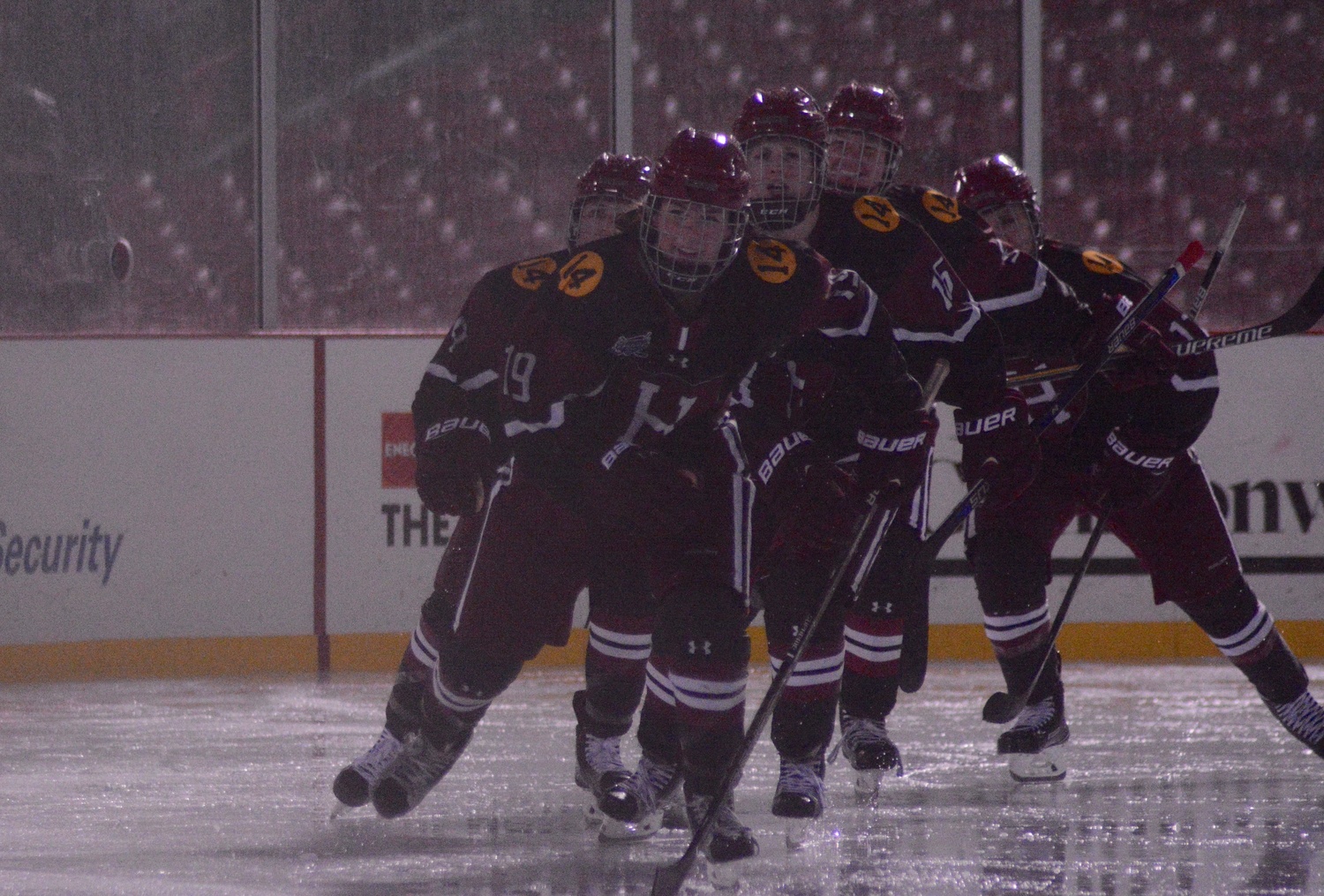 Kat Hughes and company skate back to the bench after the freshman scores Harvard's first goal of the night. By Jake Meagher

In the final two minutes of play, Harvard pulled Laing out of the goal in an attempt to erase the divide in the score, but it was to no avail.

“BC is a really good team, and they have some really good players but we’ve had some success against them,” Stone said. “We’re in a rebuilding mode, and they’re still in a pretty strong place in their program. Things go in cycles.”

A lot of legends have been honored at Fenway, and Tuesday night’s legend in residence was Denna Laing, older sister of the Crimson’s Laing sisters, who played hockey at Princeton before going on to play in the inaugural season of the National Women’s Hockey League for the Boston Pride. Denna was a promising star to guide the NWHL’s debut into the sporting world, but an accident in her first outdoor game left Denna with an injury that would end her hockey career.

The entire Harvard team honored Denna during Tuesday night’s game by wearing ‘14’ patches on the shoulders of their uniform, and Denna dropped the ceremonial first puck before the game. 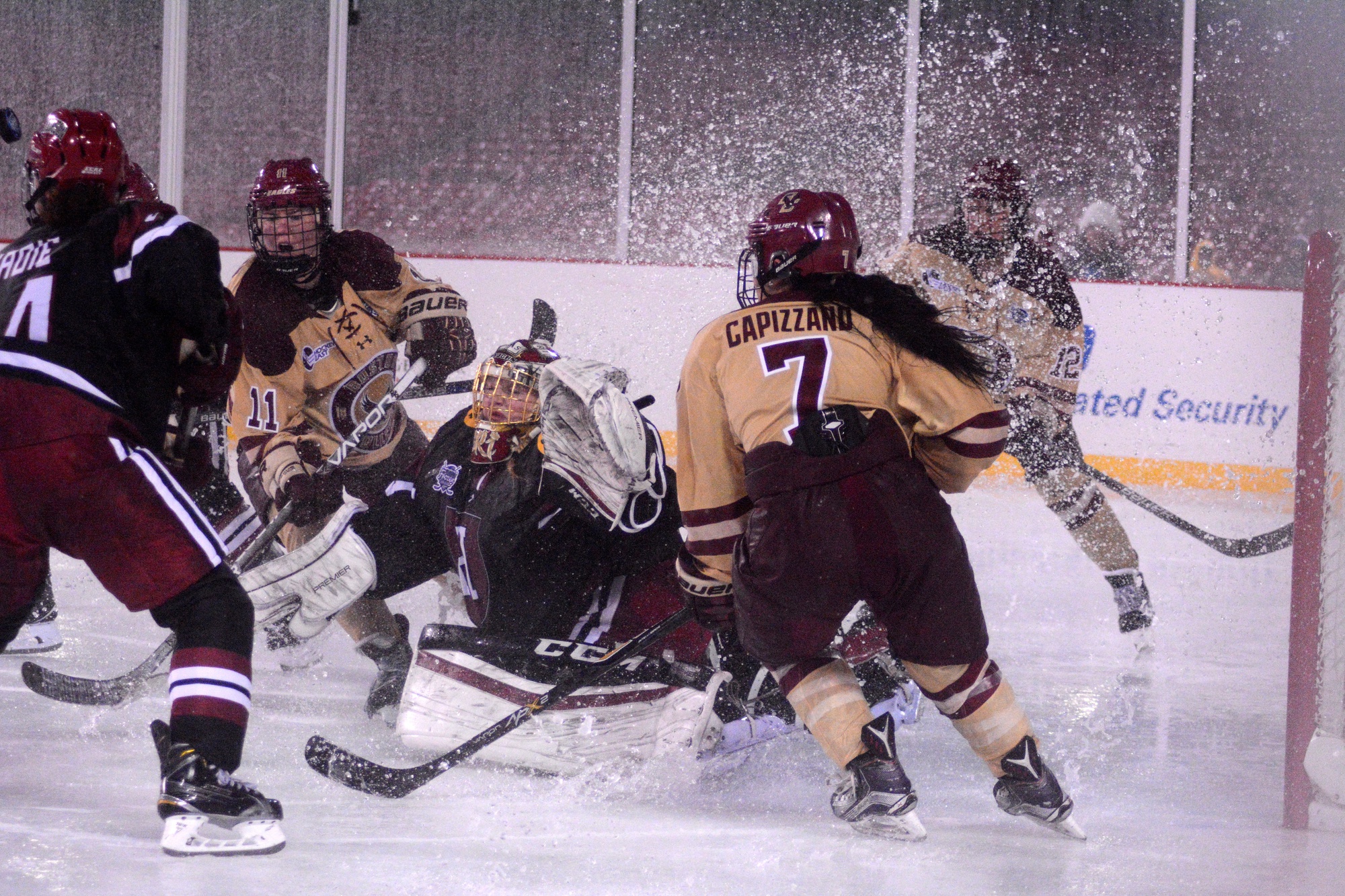 Integrating women’s hockey into the Frozen Fenway series also included high school girls hockey as well as a clinic provided by the Boston Pride before the game.

“I think as a player who’s riding the wave of women’s hockey coming to the forefront, it’s awesome,” senior Sydney Daniels said. “You get the sense of recognition now that growing up, the players above us didn’t have. Going to games and having the younger players look up to you and aspire to be in the shoes that you’re in, it just makes the position you’re in feel that much more of a privilege.”