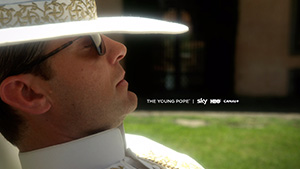 Photo: Courtesy of HBO
In an opening scene that would have felt more at home in an art house horror film, Lenny Beraldo (Jude Law), or Pope Pius XIII, emerges from a towering pile of curiously motionless human infants. At first, “The Young Pope”—with its unabashed opulence, excessive provocations, and obvious attempts at satire of the Catholic Church—feels like a gaudy melodrama designed to shock an undiscriminating viewer. However, its somewhat obvious wink at the audience makes the show more meaningful when one considers its real-world context. Within the first ten minutes, “The Young Pope” seems to comment on its own aggrandized existence by subsequently revealing a behind-the-scenes moment. The almost nauseatingly excessive camerawork, imagery, and choreography behind the infant pile emphasizes the show’s over-the-top nature. Thus begins HBO’s newest series.

“The Young Pope” arrives into a television scene rife with antiheroes. At first, Beraldo fades into the crowd. Over the first two episodes he has not revealed himself to be a master manipulator or politician in the style of Netflix’s Frank Underwood on “House of Cards.” He is also not a charismatic or sympathetic villain in any way that evokes conflicted feelings, like those who dominate HBO’s “Game of Thrones.” He is more of a petulant child than a political mastermind, and it’s confusing as to how he was able to become this young pope—and how he will be able to maintain his role. That’s where the true significance of the show lies.

With regards to acting, Jude Law preens as Lenny Beraldo. His American accent sounds like that of a Hollywood diva with a forced affectation and his physicality is strutting and over the top. Beraldo is comically vicious. He is excessively rude, but not in any exceedingly original way. Yes, some of his quips are intelligent, but none are quotable or biting.They are just mean. After he's served his first papal breakfast (a mouthwatering spread of fruit, pancakes, croissants, and other delicacies), he demands a Coca-Cola Cherry Zero instead and verbally humiliates a doting nun who kisses and pinches his cheek.

Diane Keaton delivers a reliable performance as the enigmatic Sister Mary. It is clear that she is a mother figure, a guiding presence, and the first reassuring voice. The show adds another dimension to Sister Mary’s character when it is revealed she looked after not only an orphaned Lenny but another boy as well, and from their first interaction treated them very differently. In perhaps the most interesting moment of the show, a young distraught Lenny nervously calls her Ma and is reprimanded; he is only to call her Sister Mary. However, when the other boy arrives she insists he call her Ma. It will be interesting to see the role of Sister Mary in engineering the rise of Lenny.

It is in episode two that we finally find out what the young pope is made of. Devising a radical new marketing campaign for his papacy—a vast departure from the previous merchandizing strategy, but supported by the Vatican’s marketing head—Beraldo finally reveals some of the savviness that made him pope. Delivering his address ensconced in shadows and amidst thunder, Pope Pius XIII reveals a boundless conservatism. His delivery is just shy of throwing a tantrum and in an over-dramatic ending, a clap of thunder and lightning mark the end of his sermon.

—Staff writer Kalia D. Firester can be reached at kalia.firester@thecrimson.com.
Advertisement
Want to keep up with breaking news? Subscribe to our email newsletter.