No. 9 Harvard pounces early to complete a weekend sweep in New York for the second time this season 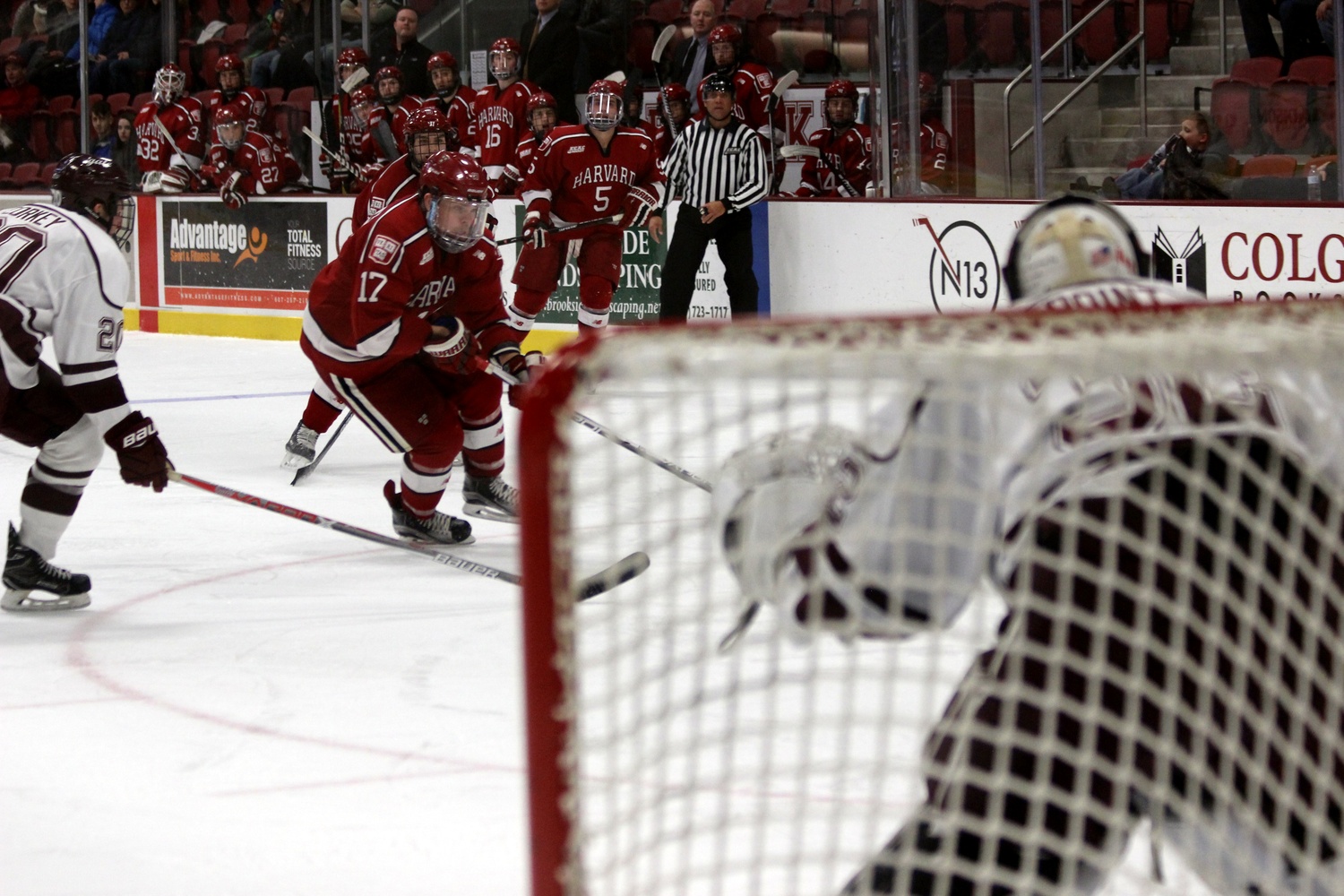 Sean Malone works his way into the faceoff circle against Colgate. He finished with three shots on net and one goal to show for them. By Thomas W. Franck
By Jake Meagher, Crimson Staff Writer

It’s not how you start. It’s how you finish.

This mantra sure was pertinent Friday night when the Harvard men’s hockey team exploded for four goals in the third period to come from behind and knock off Cornell.

But one night after its big finale, the Crimson discovered a little secret. Quality starts aren’t half bad either.

“I thought we came out very determined, and we were ready to play,” Harvard coach Ted Donato ’91 said. “I think we came out with a purpose. We were determined to get some pucks behind them and use our forecheck to put some pressure on them, turn the puck over, and play fast.”

Junior forward Jake Horton winds up for a slapshot against Colgate. He scored Harvard's first goal in both of the Crimson's two contests this weekend. By Thomas W. Franck

The Raiders couldn’t handle that purpose in the first, as the Crimson scored early and often.

For the second night in a row, junior Jake Horton put Harvard on the board—this time just two periods sooner. A little more than three minutes following the opening puck drop, Horton grabbed possession of the puck behind the net, turned the corner, and tucked a wrap-around try inside Colgate senior Charlie Finn’s right post.

For the next 57 minutes, the Crimson played with a lead—one that doubled to 2-0 with 5:30 to go in the opening frame.

In an attempt to throw a puck towards goal from the attacking blue line, freshman defenseman Paul Meyer hit Harvard forward Sean Malone’s foot, enabling the senior to collect the puck and walk in alone on Finn. Low in the right faceoff circle, Malone let go of a wrister that bounced off the pipe and in to put Harvard up two.

Malone Magic - Sean Malone works his way into the faceoff circle against Colgate. He finished with three shots on net and one goal to show for them. 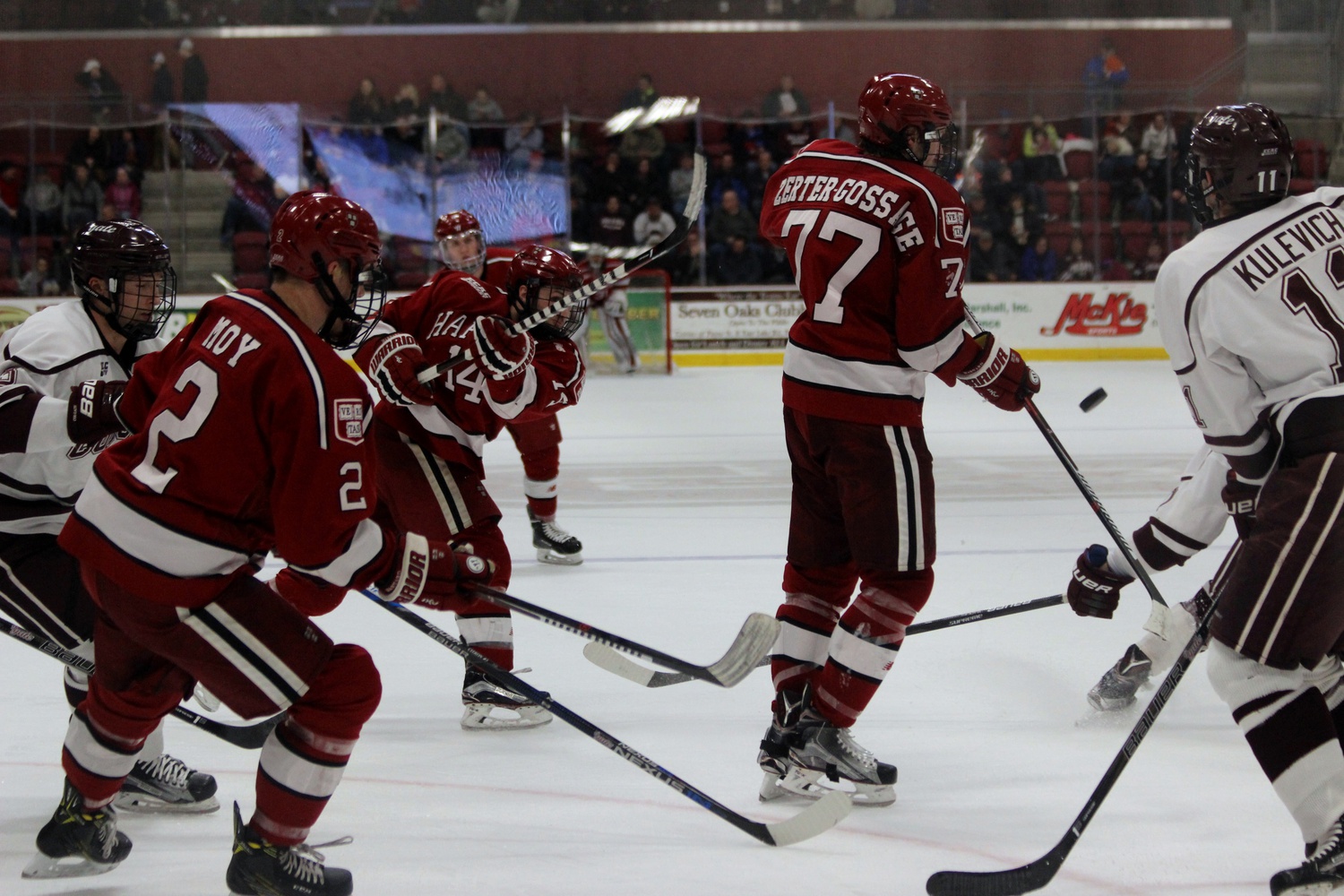 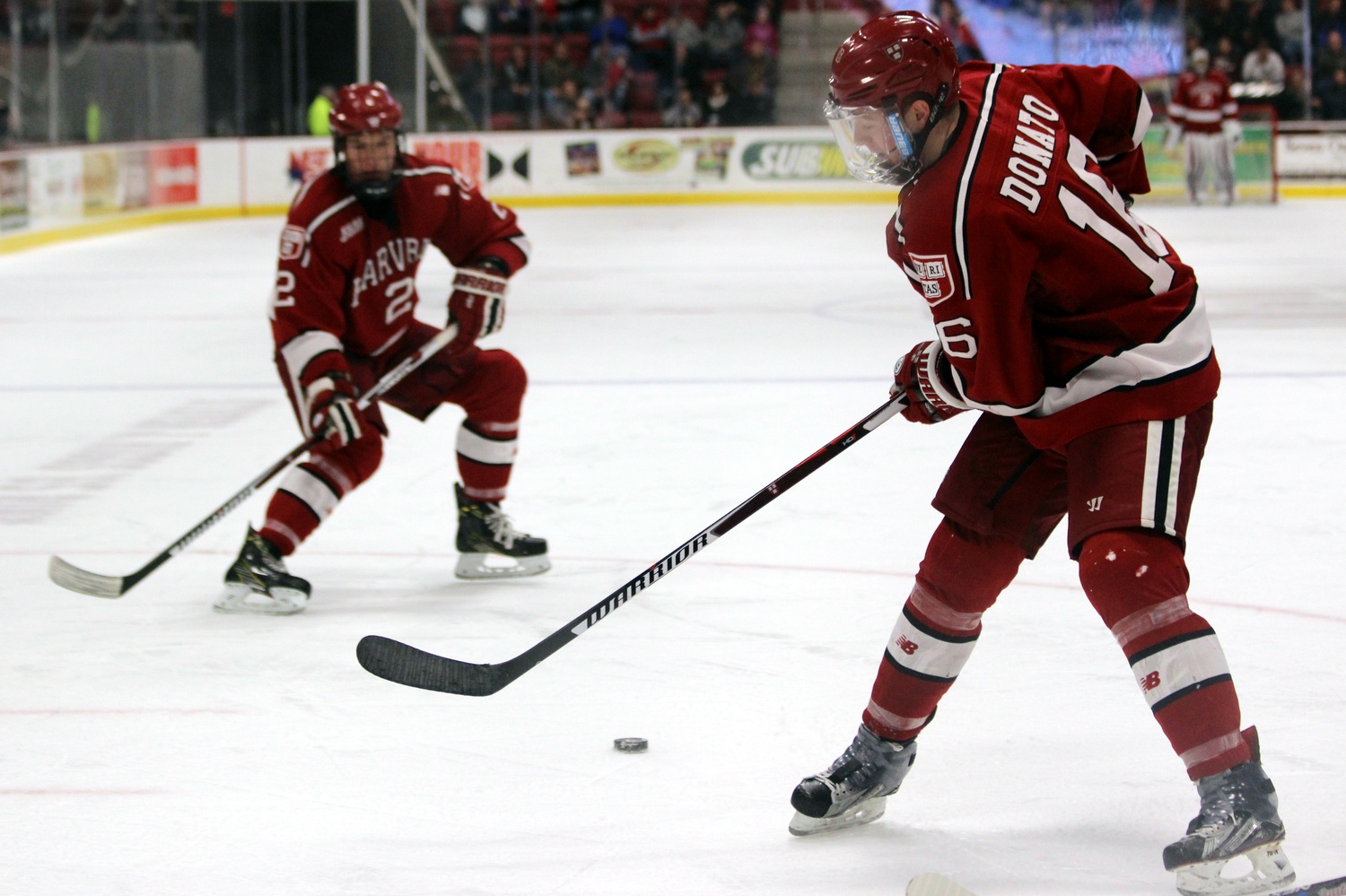 The Crimson Connection - This weekend, Ryan Donato (16) and Tyler Moy (2) moved from their spots on the wings to center the second and third lines, respectively. 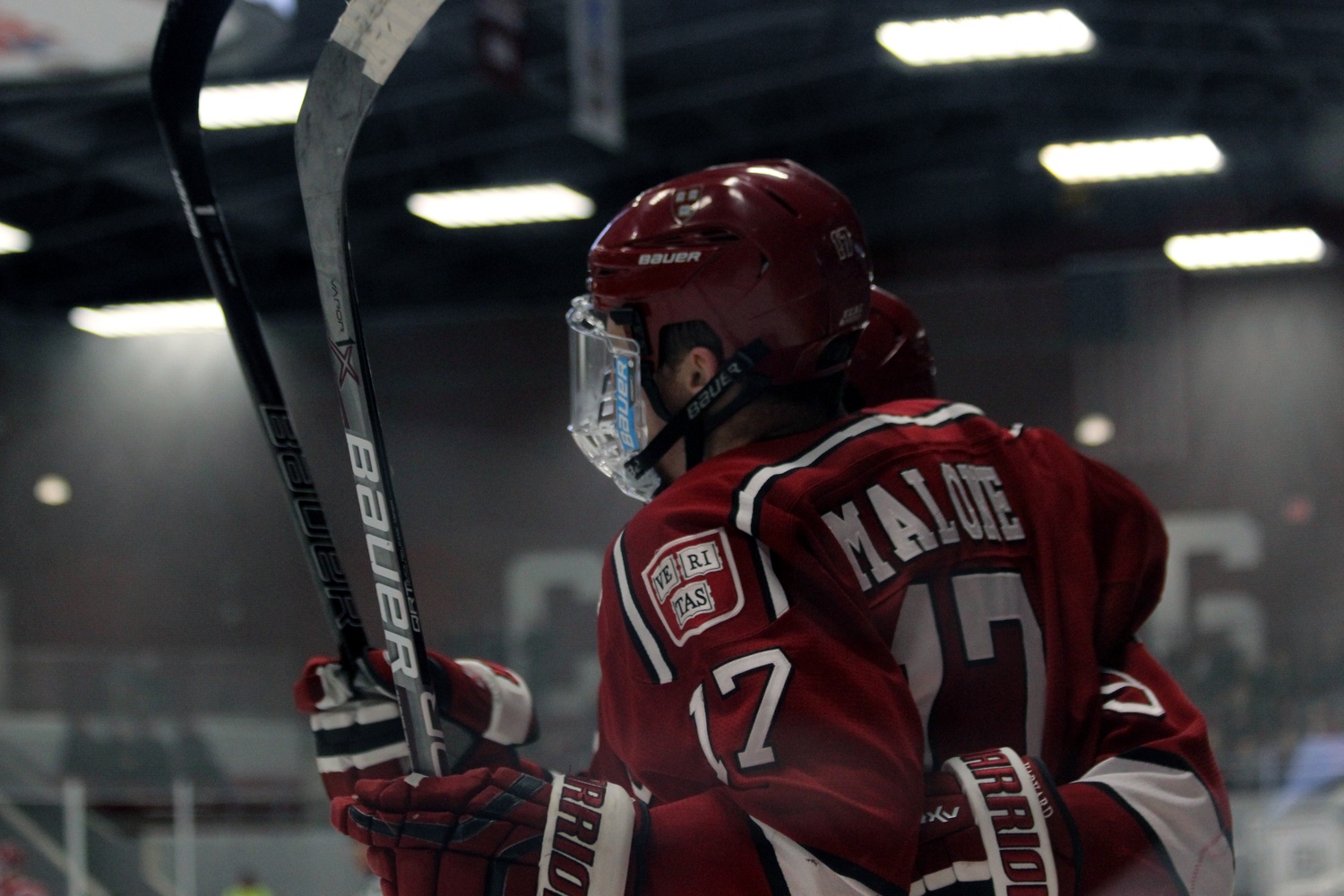 A Reason To Celebrate - Senior Sean Malone celebrates after scoring the Crimson's second goal of the game off a breakaway with 5:30 to go in the first period.

The visitors scored one last time in the frame’s final minute. Skating on the first power play of the evening for either side, senior Tyler Moy worked his way to the top of the slot, where he beat a screened Finn with a stick-side wrister—good for the Crimson's seventh goal in two periods dating back to Friday and its first score from the man advantage in three games.

“We sort of got back to doing what we were doing that made us successful earlier on in the year,” Malone said. “Things like stopping on pucks, getting pucks deep, and keeping the game simple.”

The Raiders pulled Finn after the period and did get one back with 13:25 remaining in the game when sophomore defenseman Willie Brooks struck in transition on a 4-on-4 stemming from post-whistle extracurriculars between Harvard’s Michael Floodstrand and Colgate’s Ken Citron.

But the Raiders had already missed their golden opportunity. Sophomore defenseman Jacob Olson’s major cross-checking penalty against Mike Panowyk late in the second period gave the hosts five minutes of power-play time to begin climbing out of their 3-0 deficit, but Colgate’s man advantage, which actually ranks in the top half of the ECAC in terms of efficiency, could not execute.

In all, the Crimson blocked six shots over the course of the five-minute major, only allowing two tries to make their way to netminder Merrick Madsen. The junior made 26 saves on the night and now has gone four straight games allowing one goal or less.

“You need your goalie to be your best penalty killer,” uttered Donato as he often does. “I don’t think we relied on him to make a bunch of unbelievable saves, but I thought he was very solid and made things very calm back there.”

Donato chose to roll out the same lines and defensive pairings he finished with against Cornell—ones that bear few similarities to those Harvard has been using throughout the year. The coach said the team will continue searching for “the perfect mix,” but he also provided some rationale for sticking to Friday’s script again on Saturday.

“We’re trying to put the lineup we think that gives us the best chance to win every night,” Donato said. “If someone goes in and plays well and the team is successful, a lot of times we like to stay with the same group. It puts the onus on the players that it’s a meritocracy.”

With the win, the Crimson remains three points off the ECAC lead, which for the time being now belongs to No. 16 St. Lawrence after the Saints topped No. 5 Union on Saturday in Canton, N.Y. Harvard also jumps one spot in the PairWise rankings to eighth—five spots ahead of where it stood at weekend’s start.

—Friday night against Cornell, Harvard made a few in-game line adjustments, including the moving of Jake Horton from the second line to the fourth line. Although Saturday’s lineup sheet again listed him as a member of the second unit, he spent the bulk of the night on the fourth line with co-captain Devin Tringale and freshman Ty Pelton-Byce, both of whom he praised after the game. Each of Horton’s goals this weekend were scored with Tringale and Pelton-Byce on the ice.

—Ted Donato also spoke more broadly about his lineup decisions: “We’re fortunate that we have some good depth and we have some guys that can play multiple positions. I don’t think we’re going to be able to survive all the way to the end of the season with just 20 players, so I think we feel certainly that there’s some forwards and defensemen that can be in and out of the lineup.”

—Junior forward Seb Lloyd was listed as an extra forward for pregame skate, but ultimately, he did not crack the lineup. Addressing this, the coach said, “We expect that he along with some others that didn’t play tonight will be important parts of our stretch run.”

—Harvard outshot Colgate, 21-15, through the first two periods, and it narrowly kept a 28-27 edge for the game.

—The Crimson finished 1-for-3 on the power play, while Colgate did nothing with only one man advantage opportunity, although its one chance lasted five minutes.