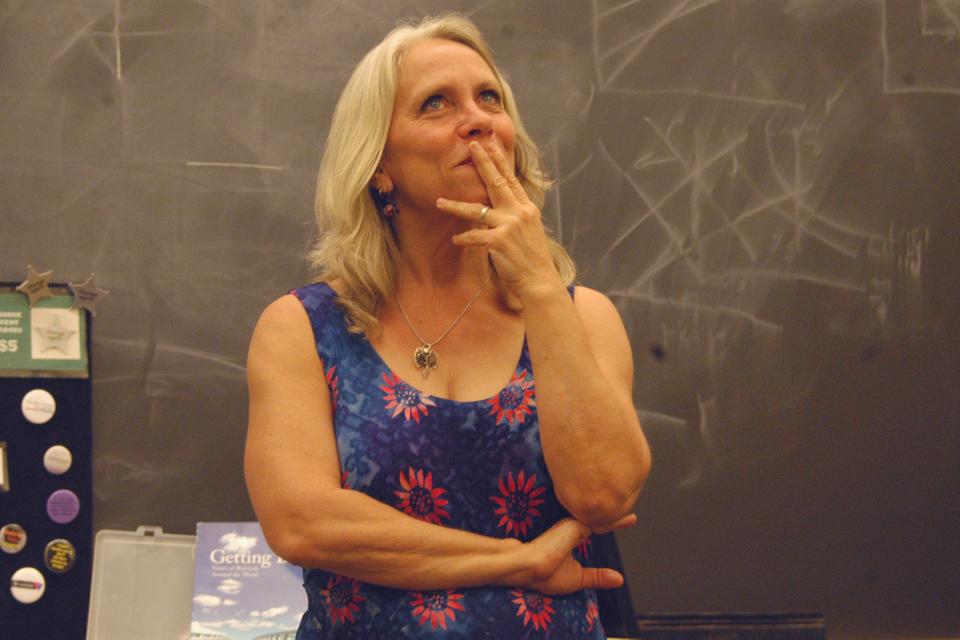 Speaker Robyn Ochs contemplates a question about sexuality. Ochs led a talk about feminism and sexuality in Boylston on Friday. By Sora S Tannenbaum
Advertisement
Advertisement

Beyond Bisexuality: A Conversation with Robyn Ochs

Robyn Ochs returned to Harvard this month to present “Beyond Bisexuality 101,” an event focused on fighting bisexual erasure and biphobia. Afterwards, Ochs sat down with FM to discuss being bisexual, fighting transphobia, and challenging the gender binary.
By Reade S. Rossman

“I have identified as bisexual for 41 years and one month,” award-winning activist, educator, and former Harvard administrator Robyn T. Ochs said at the start of her talk in Ticknor Lounge on Thursday, October 5.

Since 1982, Ochs has advocated for greater visibility for what she calls “the middle sexualities.” A self-proclaimed “professional bisexual,” Ochs returned to Harvard this month to present “Beyond Bisexuality 101,” an event focused on fighting bisexual erasure and biphobia. Afterwards, Ochs sat down with FM to discuss what the term bisexual means to her, fighting transphobia, and challenging the gender binary.

Editor’s note: This interview has been edited for clarity and length.

FM: Today is also your birthday. Can you take us back to when you were 18?

RO: I started college and developed a major crush on a woman and then spent a considerable percentage of my waking hours trying to figure out what it meant and how to integrate that into my understanding of myself. Then I got stuck in the place between knowing and being. I had no idea how to operationalize my bisexuality. I was frozen with fear and I spent five years silent and anxious and suffocating. Five years later, someone came out to me and that gave me permission to come out myself. One of the challenges of coming out is that it can be hard to bring it up in conversation—speaking of bisexuality, which, you know, I am—I wasn’t even sure how to raise the topic. We’re still part of a culture where people say, “I don’t go around telling people I’m straight, I don’t see why you have to go around telling people you’re bi.” But the reality is that heterosexuality is the default assumption, so straight people don’t have to come out. That’s the privilege of straightness.

FM: How did you move from identifying with that label personally to becoming a “professional bisexual?”

RO: I showed up at a meeting at the Women’s Center where the discussion topic was bisexuality. Out of that, we founded the Boston Bisexual Women’s Network, the longest existing bisexual women’s organization in the world. We were a grassroots, unstructured, skin-of-our-teeth organization. We were in a moment of history where it was time for that to happen because if you look around the United States, many bi organizations started in the early and mid-80’s. We forced them, we made the debates happen. So many different groups of people were starting to advocate for this more intersectional frame.

FM: How has this presidency shaped your activism?

RO: As I travel around the country, I see so much more distress. I see people very afraid of what’s going to happen to them. It’s not so obvious in Cambridge but when I go to Oklahoma or Ohio or Michigan or most parts of the country, people are anxious and afraid—afraid that what little gains we’ve had will be turned back. I hope that the next thing that happens is a backlash to the backlash.

FM: Now I want to shift to labels. Some people are challenging the term “bisexual,” saying it affirms the gender binary. Why do you claim that term?

RO: I think that term has historical value and what bi activists have done is redefine it. The “bi” in bisexual for me now is “attracted to genders similar to my own and different from my own.” So the “bi” is not men or women, it’s similar and different. That’s an adaption that has allowed that word to exist as we’ve found new frames. It’s an adaption that’s allowed me to continue to use this word and incorporate our increasing knowledge that gender is not binary. I also identify as pansexual and queer, I think all these words heavily overlap. What I don’t want to see is that horizontal hostility. I don’t think it’s productive for bi and pan people to be at odds with one another. I think we should be fighting together for that middle sexuality space and for the right to hold nonbinary identities.

FM: There has been a rise in gender neutral clothing in a lot of mainstream companies and fashion houses. Do you see this commodification of non-binary identities as negative?

RO: I think there’s always a danger of commodification. It always has its risks and it can be used for evil. On the positive side, these objects, whether they be t-shirts, pins, or hairstyles, can also be used to make visible what is normally not seen. The power of wearing a bisexual pride t-shirt in public is that everyone who sees you will receive that information. For some people that will provide a possibility model—and that’s powerful. I know I feel happy when I see one—when I see a bumper sticker or a t-shirt, I get that rush of joy. You have to use some tool to demarcate some alternate identity than what people assume. For me that’s why [these objects] can be a tool of empowerment.

FM: What is the best way for people, whether they identify as LGBTQ+ or not, to actively support the community?

RO: One of the things that happened to me a lot when I was doing marriage equality work was so many people coming up to me and saying, “Oh good for you, I support you, I hope you win.” I kept thinking, “Are you phone banking, are you contributing money, are you showing up to our rallies?” We need your concrete material help. Being an ally for me would be saying, “Oh that’s great. I support you.” Being an accomplice is doing something about it.