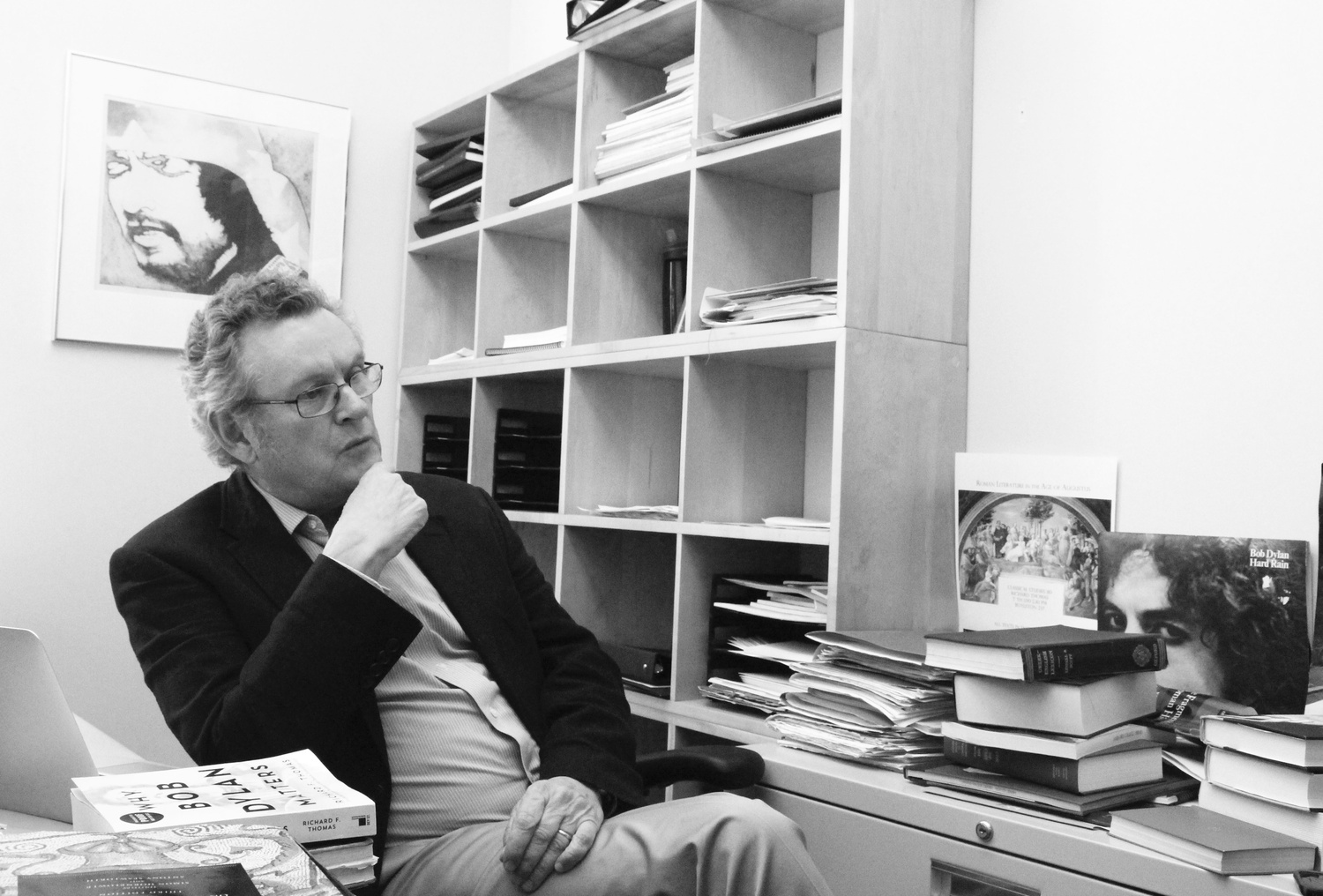 Richard F. Thomas, the George Martin Lane Professor of the Classics at Harvard, is scheduled to release his new book, “Why Bob Dylan Matters,” on November 21. Thomas has taught a freshman seminar about Bob Dylan and classical poets every four years since 2004, and most recently, in the fall of 2016, when Dylan was awarded the Nobel Prize in Literature. Thomas has published an article in 2007 about the relation between Dylan and the classical poets, “The Streets of Rome: Classical Dylan,” in the journal Oral Tradition. Thomas’s book builds on some of the connections he established in his earlier article, but also—he hopes—extends the concept to the modern day, arguing for Dylan’s relevance in modern music and literature. Thomas sat down with The Harvard Crimson to talk more about the upcoming release.

The Harvard Crimson: Tell us a bit about your book.

Richard F. Thomas: The book is about the lyrics, the way in which Dylan is the genius of my lifetime—with musical poetry, if you like, however we define his art. The book is about how he comes into alignment with a lot of the poets that I work on from antiquity, but also in the English literary traditions, and the ways in the past twenty years he’s adopted these texts and put them into his lyrics, bringing other contexts, other characters, into the songs, so the singer has transformed in the process. That puts Dylan’s art in a long tradition that goes back to the field that I’ve studied for a long time.

THC: What was the inspiration for the book?

RFT: I’ve been thinking about doing a Dylan book for some time, but really it was doing this freshman seminar, which I do every four years, and doing it on the day of the Nobel Prize. When I was approached about the book, no topic was prescribed, and I wasn’t sure what the structure would be when I began. But it developed over the months as I was writing it, it’s about Dylan’s song and Dylan’s writing … There’s something about his music which gets into your head, and his lyrics are above all about what it means to be a human being—successes, failures, losses, and gains—we all have these in our lives, and music captures it.

THC: Did you grow up listening to Dylan? You describe this a little bit in the book when talking about Bob Dylan in New Zealand, but was he a major part of your life growing up?

RFT: Very much so. In those days, everybody listened to the same music. There were music stores. There wasn’t online music. There were indie groups, but they were very local. Essentially, at my school, as I write, we sang “Blowin' in the Wind” when I was 14, and I was listening to the music of the ’60s, pop music, and his was a voice that was obviously there from the beginning. It’s really what he did to music from ’64 to ’66 that transformed pop music and folk music and created a new genre.

THC: How did the idea come to you? Was there an a-ha moment, or anything like that?

RFT: I started making the connection in the ’70s, and probably with the album “Blood on the Tracks,” which is an album about divorce, about reflection on the past which is gone. So a lot of past tenses in the songs mirror past relationships where memory is very much alive. This is not so much Virgil but more the poet Catullus, who was a lyric poet, and that is where I started seeing that album in particular, in early 1975. You can also see that particular voice in the earlier music, so that was a loose connection. The tight connection really came with the albums in 2001, when he started quoting not just a couple of lines of Virgil but also “Huck Finn” and other novels—his art started looking very much like the art of Virgil and Ovid, who are embedding prior tradition into their songs. That’s when he starts functioning like a pre-Romantic poet—Milton with the Bible and Virgil in Paradise Lost.

THC: Dylan was playing the role of a traveling bard, retelling stories by word of mouth—he seems to adapt the stories to a new audience in the same way the poets might.

RFT: I think that’s true, and I think that’s part of how folk works. We have ancient harvest songs whose stylizations turn up in the poems, and what gets lost is folk culture and song. Humans have always sung about their problems and joys, and that tradition is going on under the surface. A song like “Barbara Allen” we happen to know because Samuel Pepys mentions in his diary—it’s why the Lomaxes were collecting and taping Appalachian and other folk music and preserving it. I think Dylan sees himself as part of that tradition, but he also says you start off with an idea and see where it goes. He’s not giving us a retelling of the classics, but he’s assuming the voice of some of those characters, and he’ll mingle it with some other characters. Dylan likes those incongruities and weird juxtapositions.

RFT: His art presents in aesthetically compelling ways what it means to be a human. The word humanities, humanitas in Latin, it means a number of things, but chiefly it means the fact that we’re all humans. It’s an attitude we have towards all human beings, because they are humans, and the humanities is a set of disciplines that reminds us what it means to be human through art.