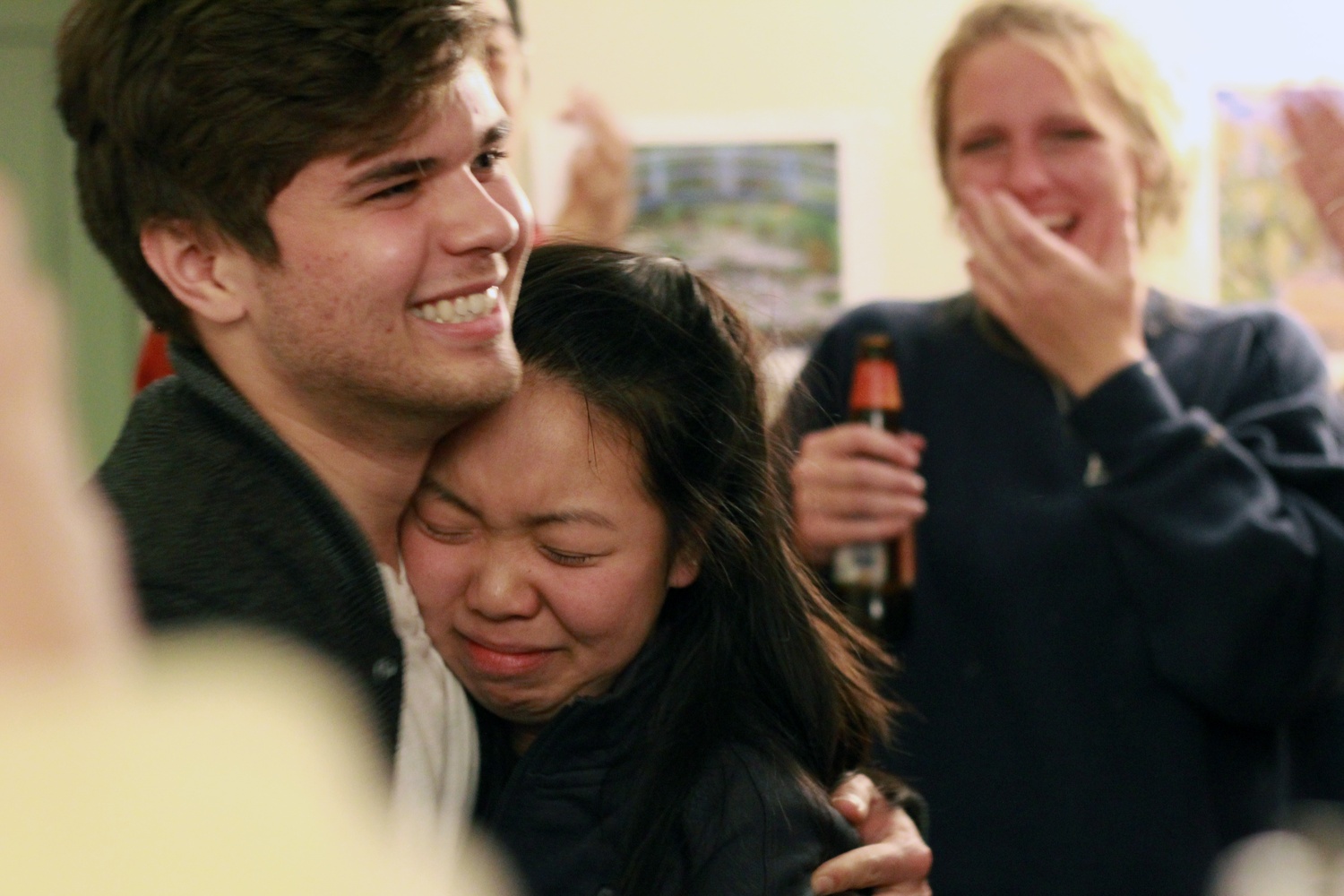 Catherine L. Zhang ’19 and Nicholas D. Boucher ’19 embrace amongst friends Thursday evening after being informed that they had won the election for Undergraduate Council President and Vice President. By Krystal K. Phu
By Andrew J. Zucker, Crimson Staff Writer

Catherine L. Zhang ’19 and Nicholas D. Boucher ’19 will lead the Undergraduate Council next year after receiving 55 percent of the first-choice votes, according to UC Election Chair Matthew C. Estes ’18.

"I don't really have anything to say except thank you guys, love you guys, we should be the ones kneeling to you guys,” Zhang, a Cabot House representative said after learning she and Boucher had won the election Thursday evening. “This really means a lot, and we're really excited.”

Only 2,074 undergraduates—less than a third of total College students—voted in this year’s election, the lowest turnout rate in at least the last six years. Last year, 3,042 undergraduates cast ballots for the UC presidency and vice presidency, a slight increase over the 2,898 ballots cast in 2015.

Zhang and Boucher ran on a platform that endorsed establishing a multicultural center at Harvard and prioritized mental health programs and sexual assault prevention. The duo also pledged to urge Harvard to drop its appeal to the National Labor Relations Board after the NLRB’s decision to invalidate a 2016 student unionization election.

Zhang and Boucher also said they broadly support the College’s penalties on members of single-gender final clubs and Greek organizations, which—starting with the Class of 2021—bar members of these groups from campus leadership positions, athletic team captaincies, and certain fellowships. The other two tickets said they did not support the sanctions.

This year’s election was marked by both voting troubles and an allegation of campaign impropriety. During the voting period, students were at times unable to access the voting portal, according to Estes.

The Election Commission also investigated a charge that Agbafe and Bervell inappropriately obtained student phone numbers in order to target potential voters via text after the duo messaged several College students promoting their candidacy. The Election Commission ultimately unanimously voted against taking action on the allegation, according to Estes.

“Before we even went about doing this, we made sure to call the Election Commission and asked them for their permission and after getting it, that’s when we decided to do it,” Bervell said. “We also talked with some of the Deans at Harvard and they also said that it didn’t run afoul of the rules.”

The referendum that garnered the most “yes” votes involved extending Thanksgiving break. It received 1852 “yes” votes to 152 “no” votes.

Because all referenda gained support from more than half of the voting population, all four are now considered binding and the UC must write a policy paper about each.